It may get hot and humid but don't discount Japan in the warmer months. With the incredible amount of outstanding festivals, August is one of the best times to visit.

Dynamic and colourful, these are five of the best Japanese festivals in August that should be on your list.

Almost every Japanese has heard of the Nebuta Matsuri for a reason. Held annually over six days in the northern city of Aomori, the Nebuta Festival is considered one of the Tohoku Sandai Matsuri or Three Great Festivals of the Tohoku Region.

Every night of the festival (except for the final day when it is held during the day), giant painted paper floats known as nebuta weighing up to 4 tonnes and filled with up to 800 light bulbs are paraded through the streets using nothing but people power to push them from side-to-side, playing with the crowd. The nebuta generally depict kabuki characters, and historical and mythical figures.

Between the floats, hundreds of dancers known as “haneto” dance wildly in a kind of hopping/skipping motion to the cries of “rassera rassera! rasse, rasse, rassera!” as taiko drums and flutes fill the night. Anyone can participate as a haneto dancer as long as they follow the festival attire.

On the final evening, the nebuta are placed onto the bay lighting up the water while fireworks light up the sky. The Japanese are serious about their fireworks. You won’t be waiting all evening for a ten-minute finale. Instead you’ll be treated to a close to constant two-hour light show.

Right up there with the best of the best of Japanese festivals, period, you won't be disappointed if you make a special trip all the way up north for this one. 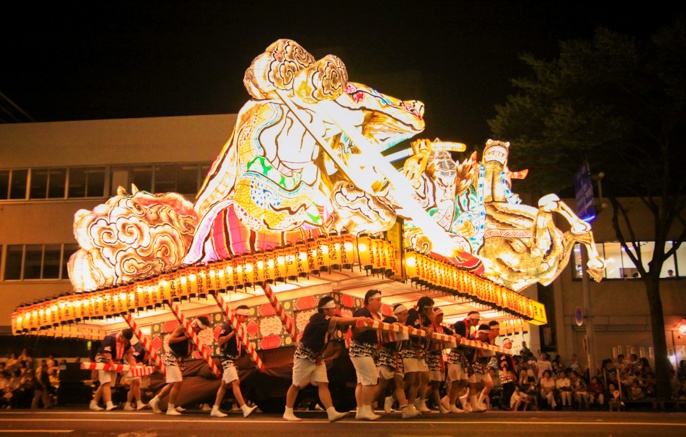 Read more about this festival, including how to participate as a haneto dancer, here.

Another one of Tohoku's “Great Three”, the Akita Kanto Matsuri (Pole Lantern Festival) is an annual four-day event that sees the streets of Chuo Dori (or Kanto Odori as it is referred to during the festival) turn into a dazzling display of light and sheer skill as men balance lanterns attached to giant bamboo poles on their palms, heads, shoulders and hips.

The festival dates back to the mid-18th Century and is performed to pray for a good grain harvest and divine protection from illness. As such, the lanterns themselves are arranged to resemble an ear of rice.

The night parade (held each night of the festival) is the main attraction, where men work together in groups around a kanto, taking turns to show off their acrobatic talents and encouraging their teammates with a hearty “dokkoisho, dokkoisho” (heave, heave).

As the performance goes on, extensions are added to the pole, increasing it to a maximum height of 12 meters, causing the pole to bend with its up to 46 lit lanterns and 50 kilograms of weight. Keeping it upright is an incredibly difficult feat to say the least, and a few crashes keep the performers and spectators on their toes.

With more than 200 kanto simultaneously in action over the 1-kilometer strip of road, the impressive display lasts for exactly one hour, after which there is a short time where spectators can come onto the street, interact with performers and take pictures with the amazing kanto. 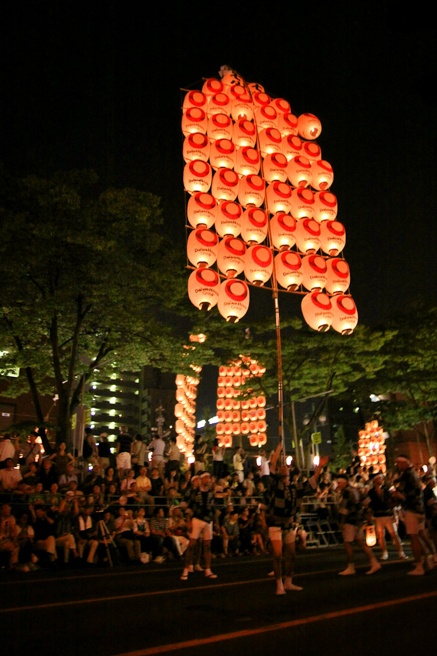 If you're heading to Mt. Fuji this climbing season, the Yoshida Himatsuri or the Yoshida Fire Festival is one you won't want to miss. With a known history of more than 500 years, this ritual has an atmosphere unlike any other Japanese festival we have attended. Raw and spiritual, you won't find any of the usual fanfare here.

The origin of the Himatsuri is based on the story of the Goddess of Mt. Fuji (Kono-hana-sakuya Hime no Mikoto) who becomes pregnant and is accused of having an affair by her deity husband. To prove her innocence, she locked herself in a room of the Fuji Sengen Shrine at the base of the mountain and set it alight. If the child survived, it would prove her fidelity as a deity child could supernaturally endure the heat of the fire. Legend has it that triplets were born and survived amid the flames. The torches lit during the Fire Festival symbolically represent the fire the Goddess of Mt. Fuji started to prove her innocence.

The festival is held to appease the Goddess whose soul, believed to live on in the Fuji Sengen Shrine, is ritualistically transferred to a portable shrine (omikoshi) and taken around the streets of Kamiyoshida so that she can see and learn of the value of the City and decide to keep the volcano from erupting. On the evening of Day 1 of the two day festival, over 90 three-meter-tall torches known as taimatsu are lit in the streets. Alongside taiko (drum) performances and food and drink vendors, it becomes a lively street fiesta until around 10pm.

The following day involves the bringing of the omikoshi back to Sengen Shrine. As dusk descends, they are taken into the forest near the Shrine where an intimate ceremony takes place. Carrying on to the Sengen Shrine itself, the festival culminates in a flurry of energy as the two omikoshi are run around the small forest clearing, before the Goddess is finally returned to the Shrine. In the darkness of the forest on the lower reaches of the volcano, there's a tangible atmosphere to this torch-lit gathering that almost feels like it's happening in complete secret.

The Yoshida Fire Festival is considered one of Japan's three most unique festivals and also acts to symbolically close the Mt. Fuji climbing season that officially ends on August 31st. 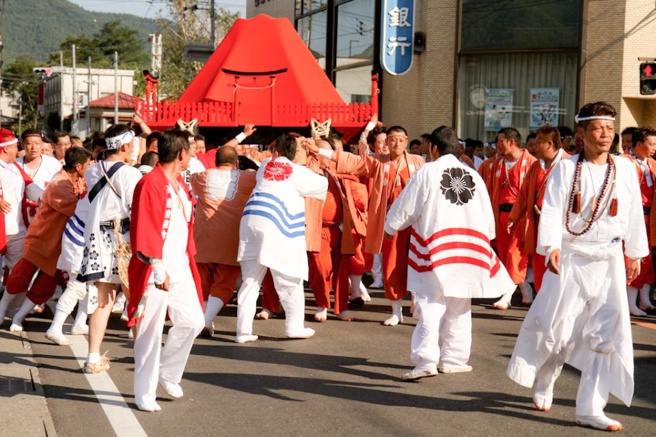 Read more about this festival and how to participate here.

Within walking distance to the Shrine, the Fujiyoshida Youth Hostel is our accommodation of choice when visiting Mt. Fuji and surrounds. If you are going to book this hostel, we'd really appreciate you using this link that throws a few pennies our way to pay for the coffee that fuels this website.

If you can't venture away from the capital this summer, the Koenji Awa Odori Festival has you covered.

The Koenji Awa Odori Festival sees more than 12,000 dancers and musicians in around 200 groups known as ren, parade through shopping promenades and streets around Tokyo’s Koenji Station. This Awa Odori festival attracts around 1.2 million visitors each year and is second only in size to Tokushima’s Awa Odori Festival in Shikoku where the “Fool’s Dance” originated, making it one of the larger events on Tokyo’s summer calendar.

Legend has it that the dance emerged spontaneously after Lord Hachisuka Iemasa distributed free sake (rice wine) to locals in celebration of the completion of Tokushima Castle in 1586. Locals spilled out onto the streets and in their drunken state started swaying back and forth. Others picked up commonly available instruments of the time and the song and dance were born. The song, known as the Awa Yoshikono chant, can be translated like this: “You’re a fool if you dance, and a fool if you just look on. If you’re going to be a fool anyway, you might as well dance!”

The men and women dance different steps with the women's described as graceful and harmonious while the men’s more lively and wild. Some groups keep to the traditional style while others perform their own versions and much of the fun is seeing the different interpretations each ren puts on the dance. Perhaps the most distinctive part of all the festival are the women's semi-circular straw hats, best described as “inverted tacos”.

Unlike many festivals, this one goes ahead no matter the weather, the dancing in the rain fever just adding to the electric atmosphere. So bring an umbrella and something to sit on and join Tokyo in farewelling a busy summer by celebrating a folk dance that all started with a drunken night out some 400 years ago. 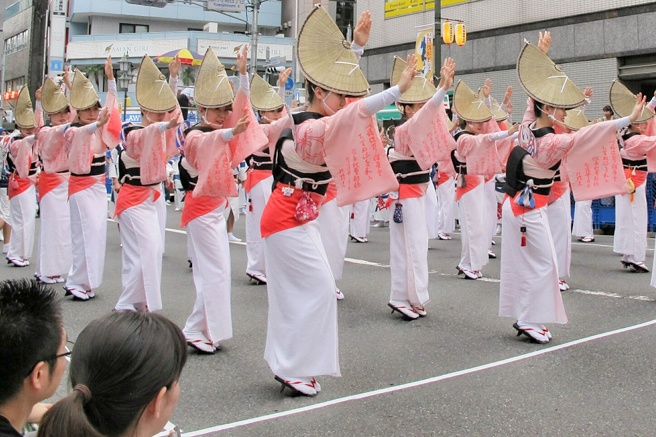 Read more about the practicalities of visiting the Koenji Awa Odori Festival here.

This one night only event now held annually in Ikebukuro West Gate Park is a high-energy, amusing and modern take on the “Fool's Dance”.

The height of summer in Japan signals the time to celebrate Obon, when the souls of the ancestors are said to return to the living world. (O)Bon festivals involving dancing that can last all night are held throughout rural towns and villages in Japan during July and August in honor and remembrance of all the ancestors have passed on to us and in celebration of their ongoing presence in our everyday lives.

Since 2009, contemporary dance troupe the ‘Condors' have been bringing a small taste of this deep-rooted custom to central Tokyo with a distinctly modern twist, leading the crowd through hilarious dance moves such as “the pistol” combined with more traditional formations.

Participants gather in large circles emanating from the central stage where the troupe leads the crowd through the dance moves. Align yourself with a partner in the opposing circle and perform the dance together. After each set is completed, you move one place round the circle to meet a new partner.

Here you needn't worry about coming alone or finding a dance partner. In the true spirit of the fool's dance, you won't be allowed to look on for long, being dragged in to join the “foolishness”. Family-friendly and fun, it's also a great participatory event to take the kids.

This event is one of a kind and I'd go as far as saying it's the best festival in Tokyo. Guaranteed to be one of the most memorable nights you'll have, this one is not to be missed. 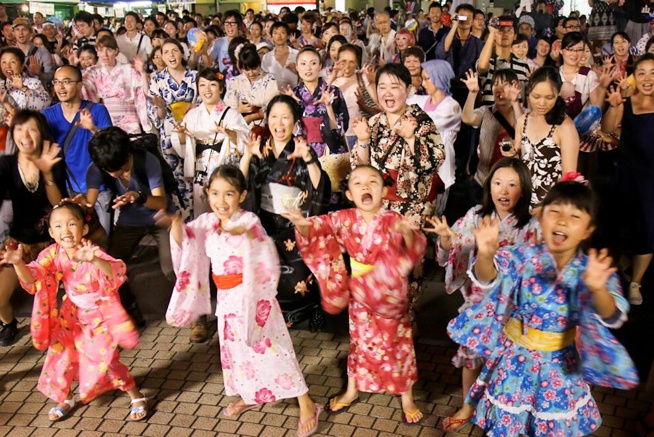 Read more, including how to get to the park, here.

What are your favourite Japanese festivals held in August?

[…] Japanese enjoy a good festival, so if you like this kind of celebration summer – May to July –is a good time for you, although […]

Went to Misugi Natsu Matsuri last night, not a huge event, about 20 food stalls, various dance groups, taiko, fireworks, and the main event, the huge handheld fireworks held till they explode. it was fantastic, lots of people too. http://www.tsukanko.jp/event/218/

Japan has so many lovely festivals, and somehow I've missed them all despite four separate trips to the country. I need to work on my timing!

The perfect excuse for another trip, Heather! :)