Head to Fujiyoshida City at the base of Mt. Fuji late August and you may feel you have been transported back a few centuries. That's because with its flickering flames and almost tribal atmosphere, the Yoshida Fire Festival or Himatsuri has a known history of more than 500 years. And like all good Japanese festivals, it all started with an equally captivating story.

The origin of the Himatsuri is based on the story of the Goddess of Mt. Fuji (Kono-hana-sakuya Hime no Mikoto) who becomes pregnant and is accused of having an affair by her deity husband. To prove her innocence, she locked herself in a room of the Fuji Sengen Shrine at the base of the mountain and set it alight. If the child survived, it would prove her fidelity as a deity child could supernaturally endure the heat of the fire. Legend has it that triplets were born and survived amid the flames. The torches lit during the Fire Festival symbolically represent the fire the Goddess of Mt. Fuji started to prove her innocence.

The Himatsuri is held annually on August 26th and 27th to appease the Goddess and to keep the volcano from erupting, as well as acting to ceremonially close the climbing season (which officially ends on August 31st). The soul of the Goddess is said to be enshrined at the Fuji Sengen Shrine. The Shrine marks the beginning of the historic Yoshida Climbing Route where pilgrims would come to pray to the Goddess to ask for a safe climb. We visited the Shrine to do the same thing before climbing along that exact route from the base to the summit back in 2006.

During the festival, her soul is transferred to a portable shrine (omikoshi) and is transported around town. If the proper procedures for taking the Goddess' soul from the Shrine and through the streets of Fujiyoshida are not followed, they risk angering the Goddess which could cause an eruption. Protocol dating back more than 500 years is observed for this ritual.

Two portable shrines are used throughout the festival. The first is called Myojin Mikoshi meaning “Shrine of the Great God” and is in the shape of a miniature shrine. The second is a one ton replica of Mt. Fuji herself called Oyama or Mikage Mikoshi meaning “mirror image of the mountain”. Part of the protocol of the ritual is that the Myojin Mikoshi leads while the Oyama Mikoshi follows. It is also tradition that when the bearers of the Oyama Mikoshi stop for a break, they throw the omikoshi to the ground three times. This is said to raise spirits, create a bond between the carriers, and to appease Mt. Fuji so it doesn't erupt in the coming year.

At 3pm on Day One of the festival (known as Chinkasai), the portable shrines are taken from their protective shelter at the Shrine and from around 3:30-5pm are carried through the Kamiyoshida area. The Goddess' soul is taken around the streets so that she can see and learn of the value of the City and decide to keep the volcano from erupting. The climax of Day One is when the portable shrines arrive at Kamiyoshida Community Center where a special area for the shrines has been prepared. Roped off with a traditional Japanese rope, it is ceremonially cut by a phoenix on top of the Myojin Mikoshi as it is carried through. Over 90 three-meter-tall torches known as taimatsu are lit in the streets. Alongside taiko (drum) performances and food and drink vendors, it becomes a lively street fiesta until around 10pm.

The following day, the Susuki Matsuri (Susuki Festival) involves the bringing of the portable shrines back to Sengen Shrine. Starting at 2pm, they are once again carried through the streets. To witness the finale, be at the road at the front of the Shrine at 6pm where you'll meet up with the portable shrines. Soon after, they will start making their way through the forest around the Shrine, marked by torches as dusk descends. You are welcome to respectfully follow. You'll stop in the forest while a ceremony takes place. The surreal image of the shrines resting on the forest floor during the ceremony, with nothing but two sparking fires in the darkness of nightfall to light up the faces of the shrine bearers as they sat and tucked into juicy nashi, is one that I won't be forgetting anytime soon. It was an intimate scene in which I felt so very removed from advanced Japan, and one that I could easily imagine taking place in this same spot, in this same way, for hundreds of years.

Soon we were on the move again, we had reached a slightly bigger clearing with several grand, old cedars in the center. The omikoshi bearers started running the shrines around the clearing while onlookers followed. I joined in too, doing my best to keep pace with the other participants so as not to get in the way of the shrine behind – pushing my muscles to their limits having only descended the mountain the day before. The ritual and ceremony continued as the portable shrines and the Goddess' soul were finally returned to the Shrine.

The Yoshida Fire Festival is a unique opportunity to get right in the thick of an ancient ritual that is far removed from the fanfare and crowds of large festivals you may have seen in other parts of the country. As we left, walking under the huge torii gate and down the long walkway that leads back to the township, with nothing but torches to light the way and the faint whispers of the few others that had been there too, it felt as if we had just left the meeting of some secret society, making our separate ways off into the darkness. 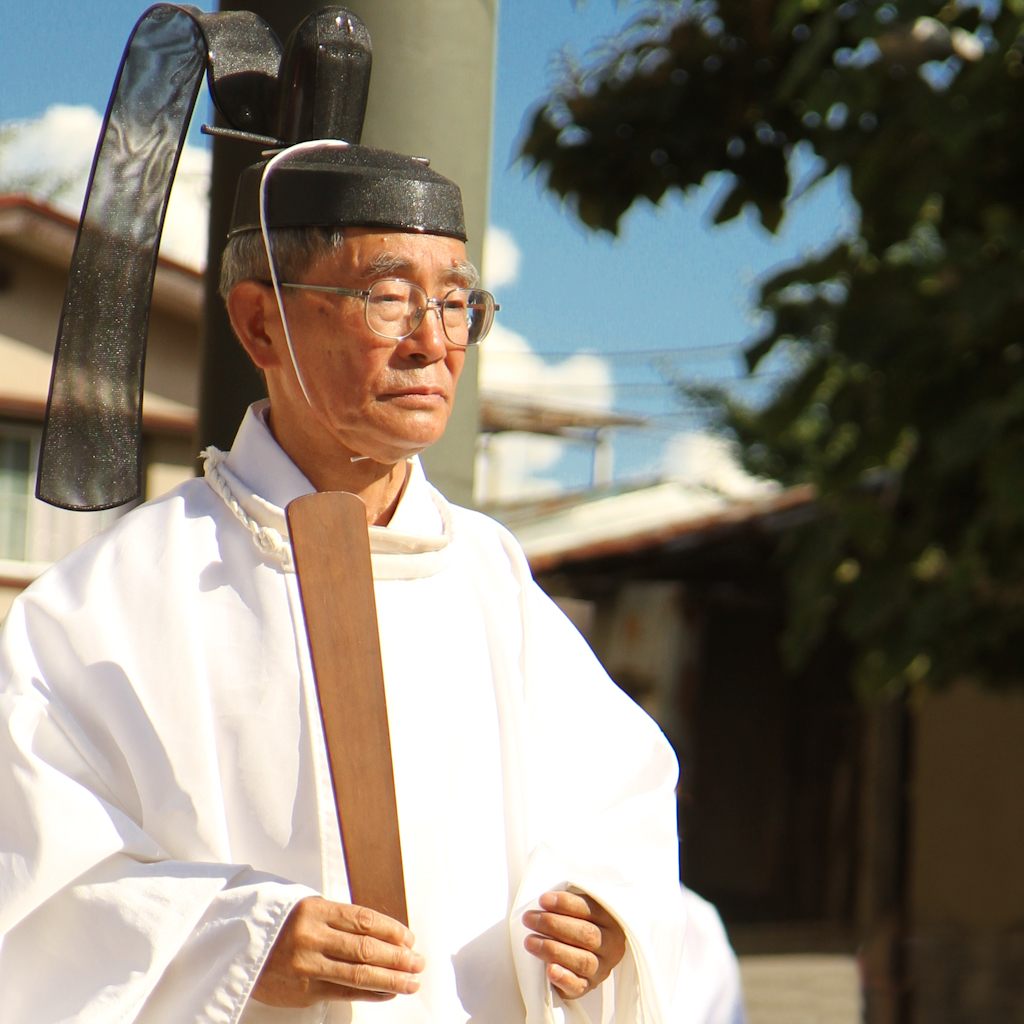 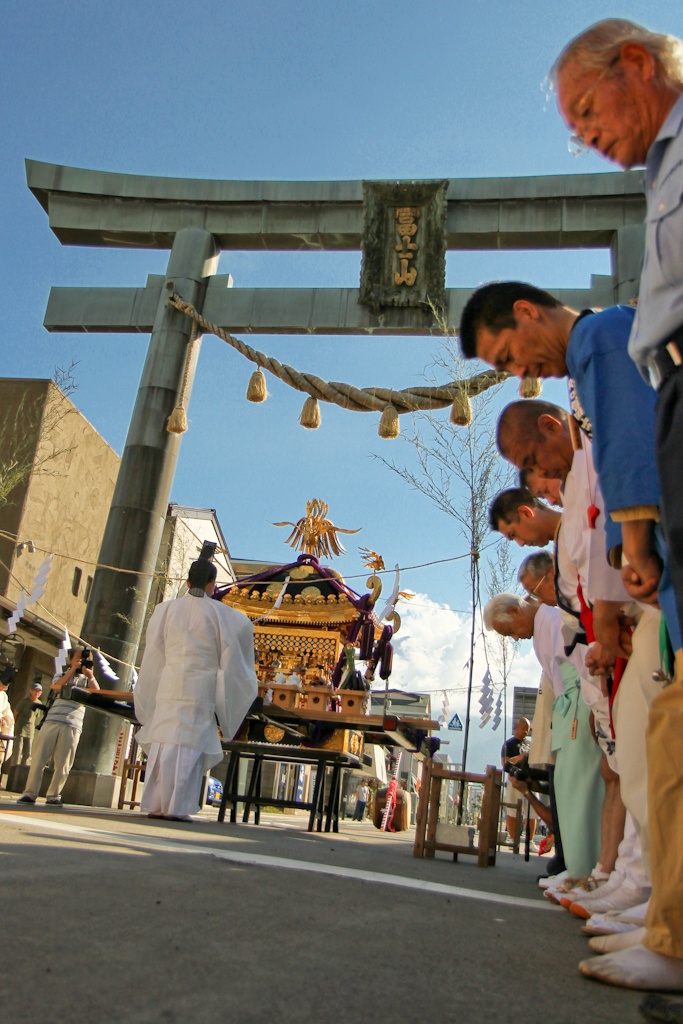 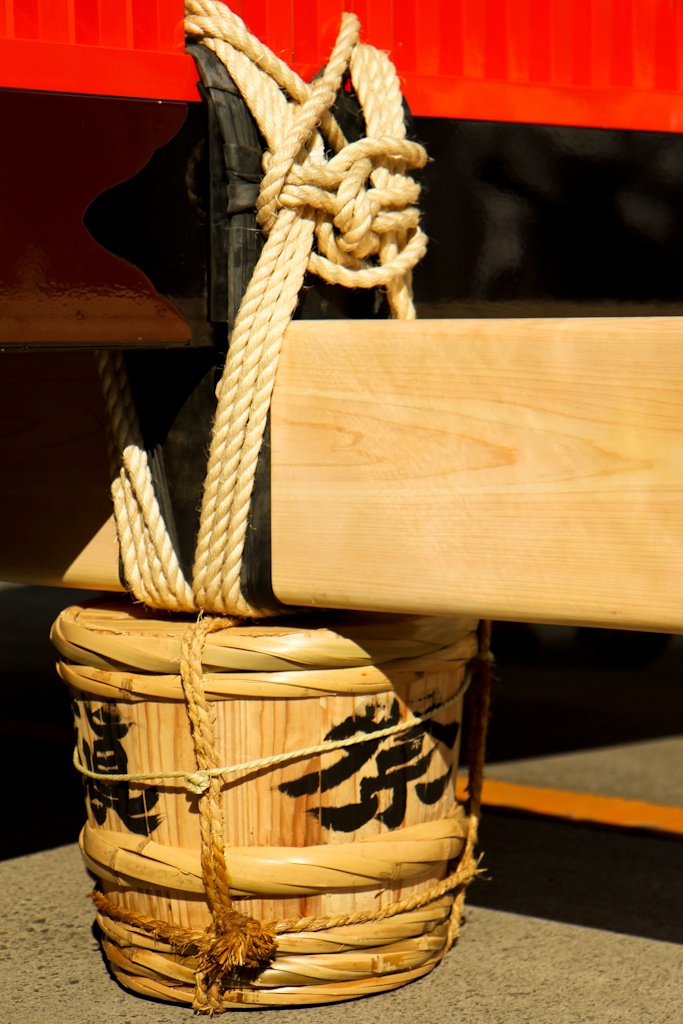 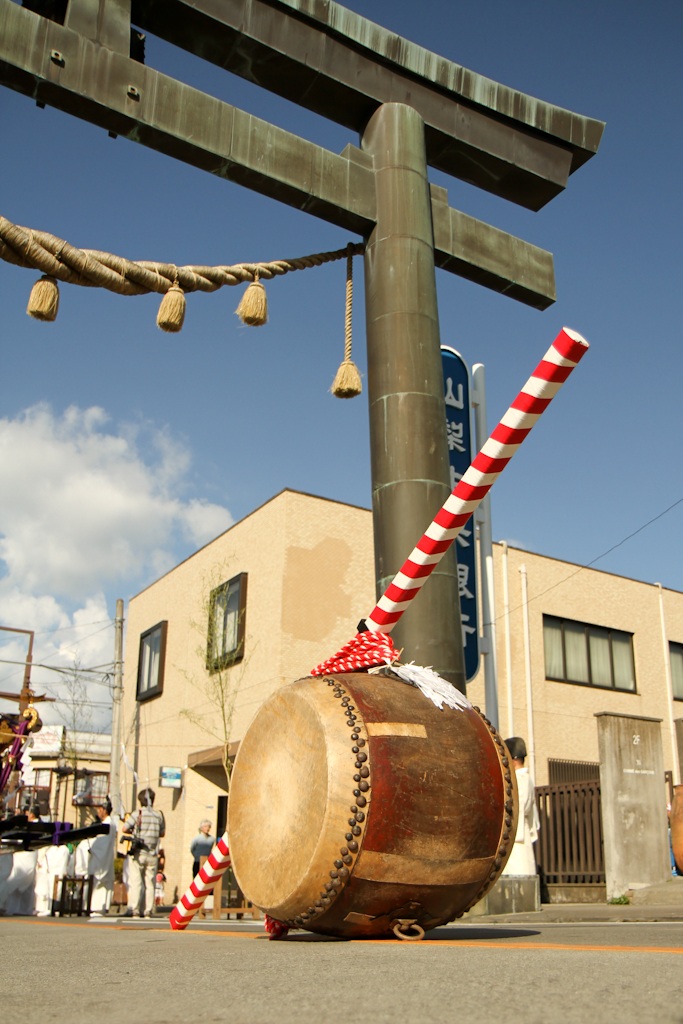 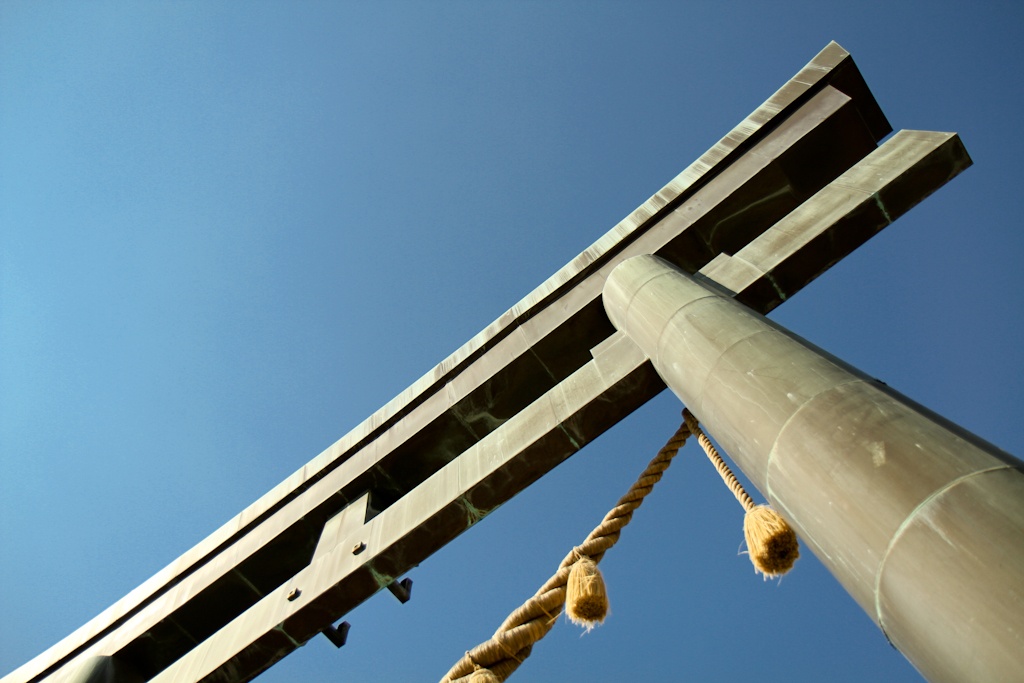 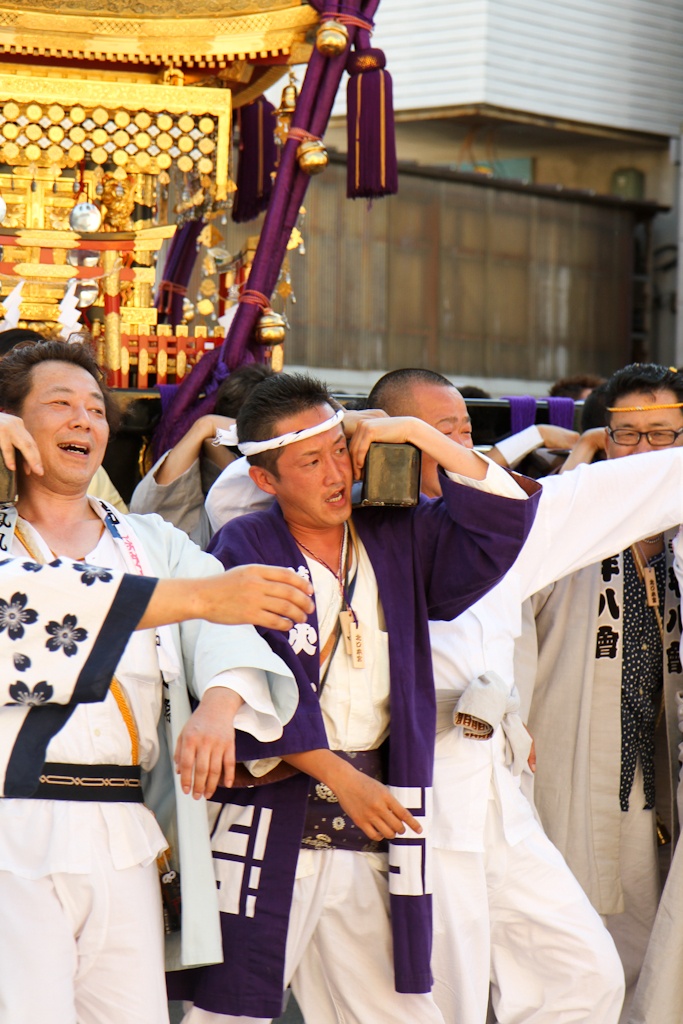 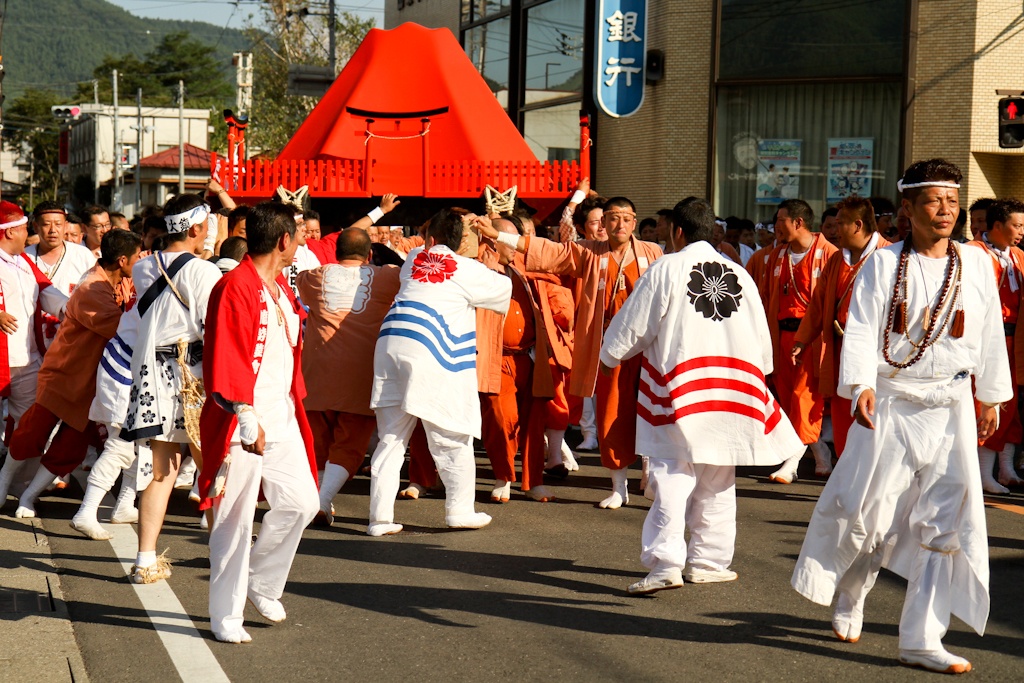 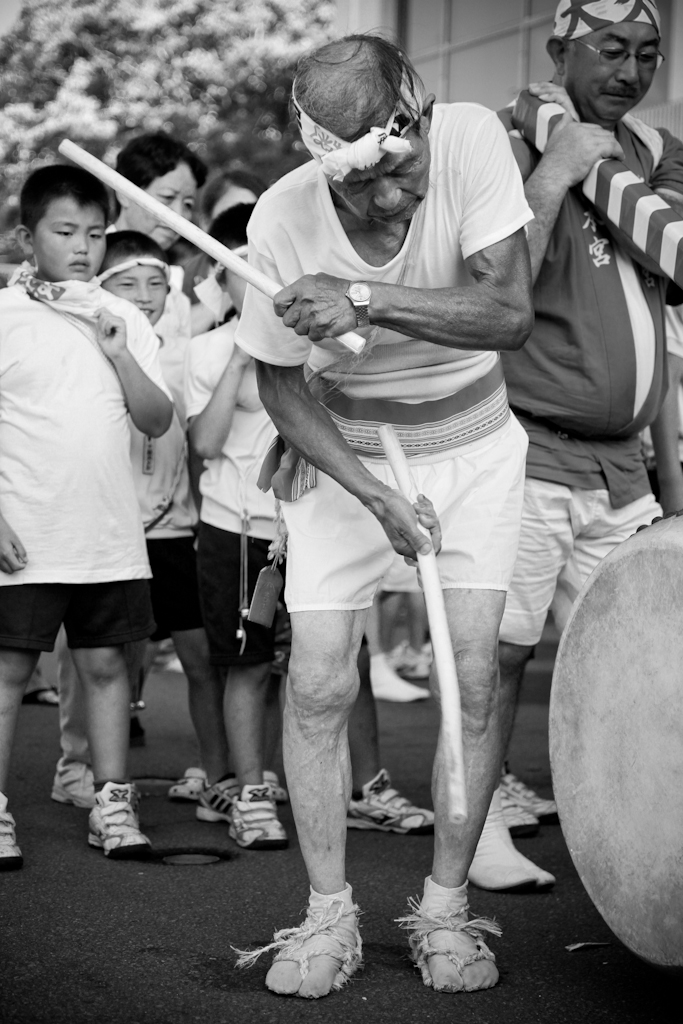 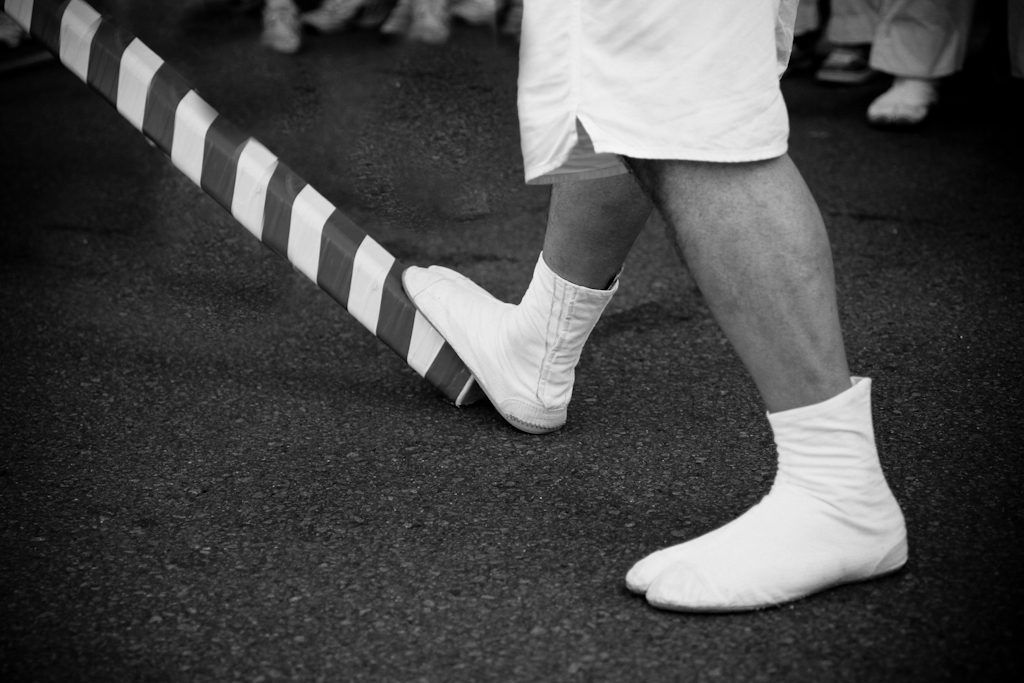 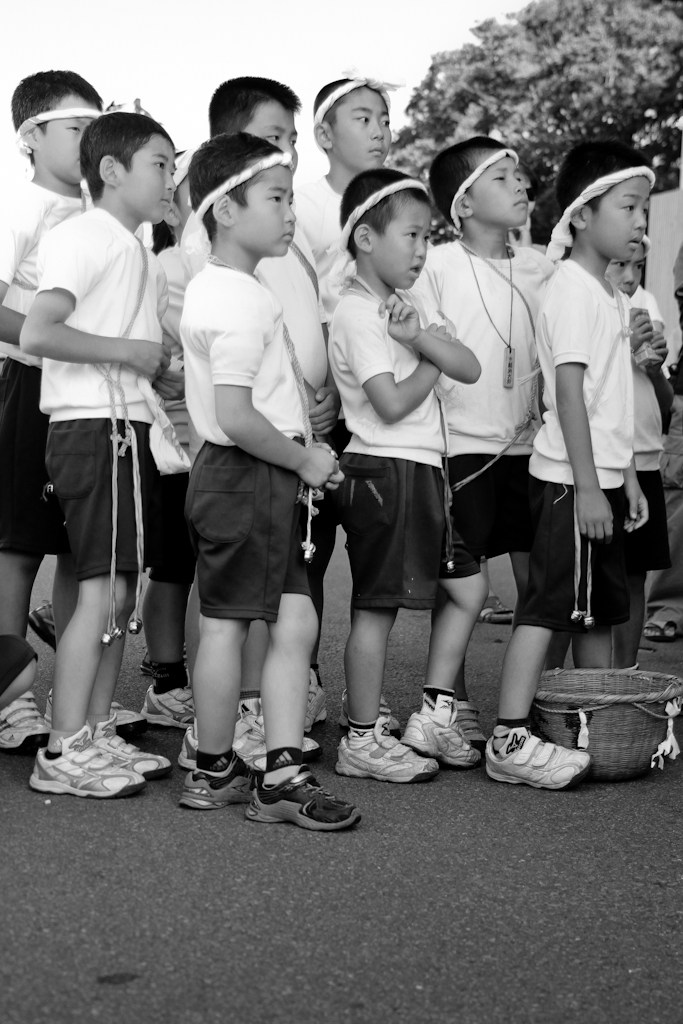 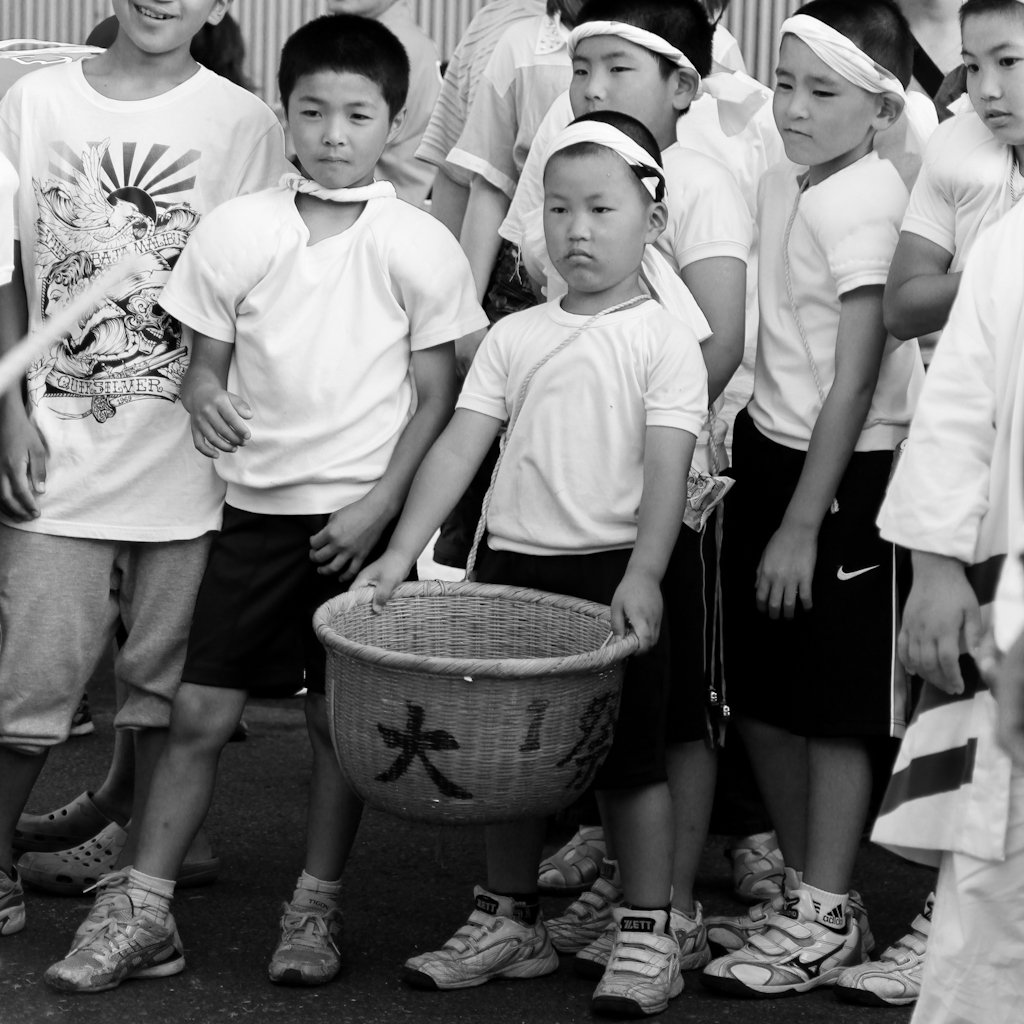 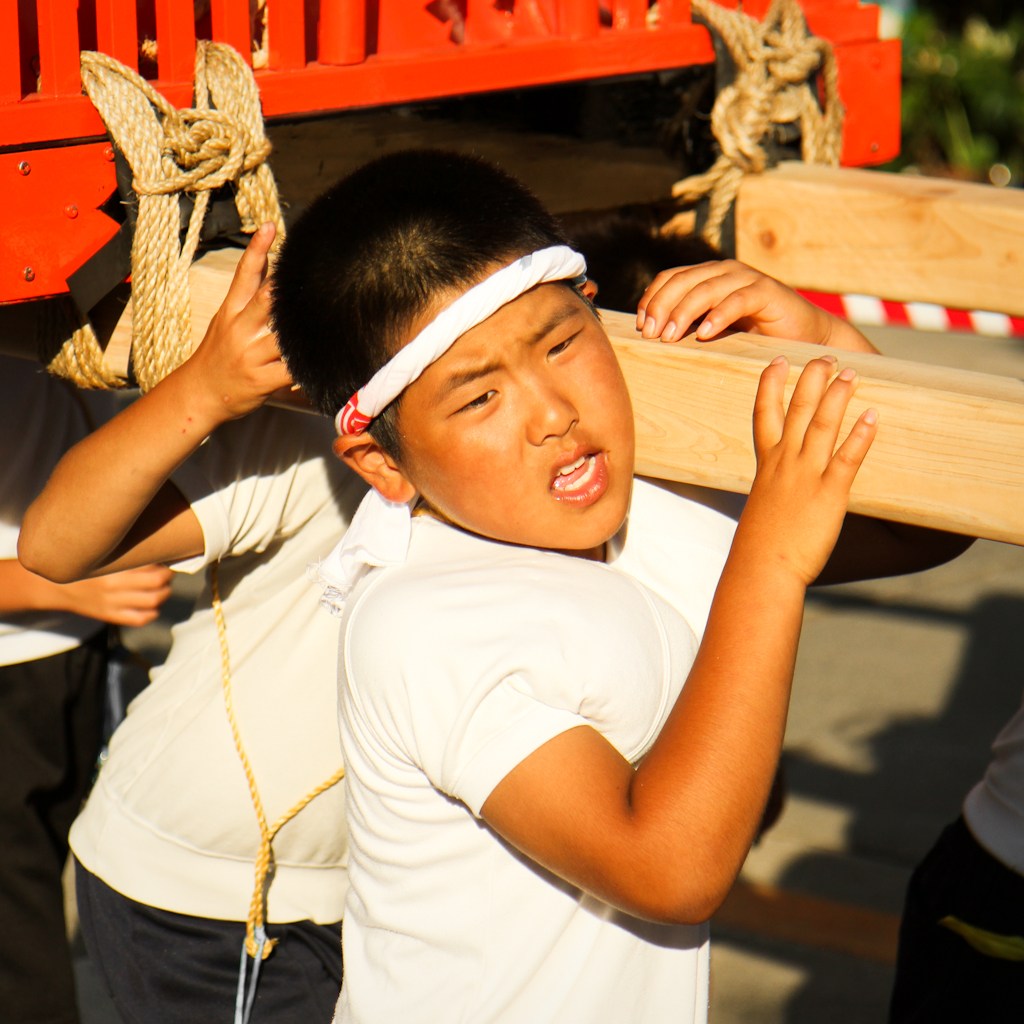 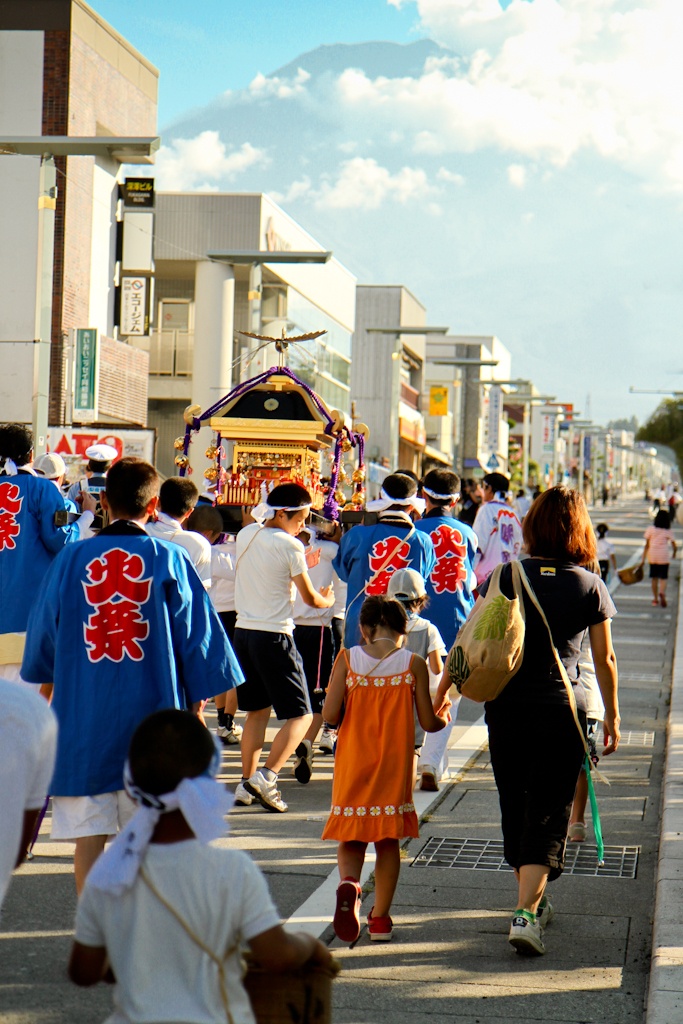 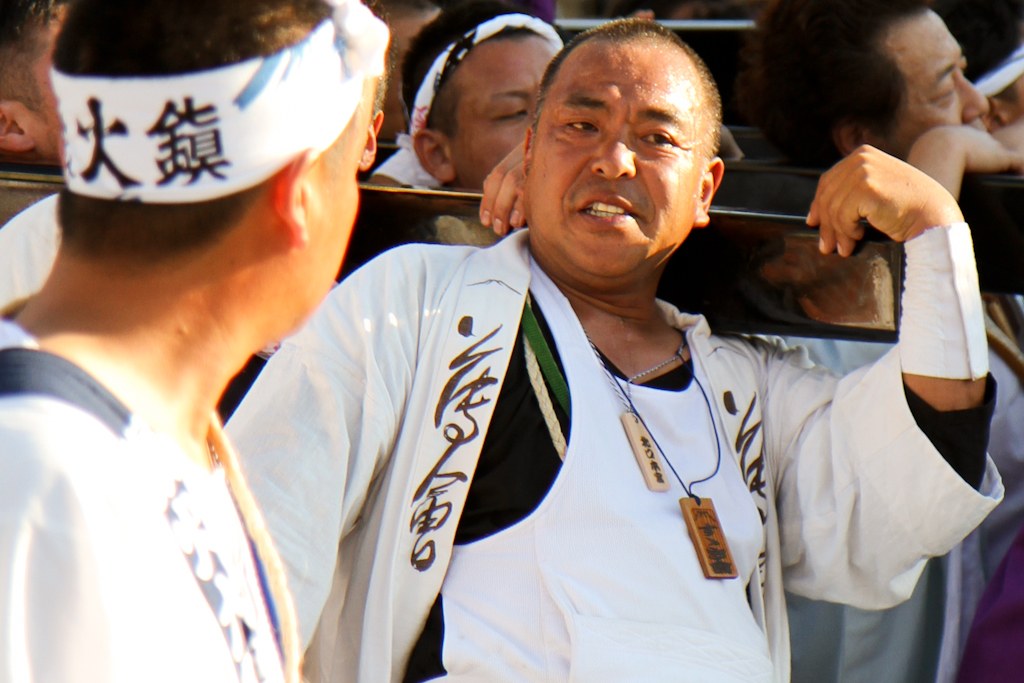 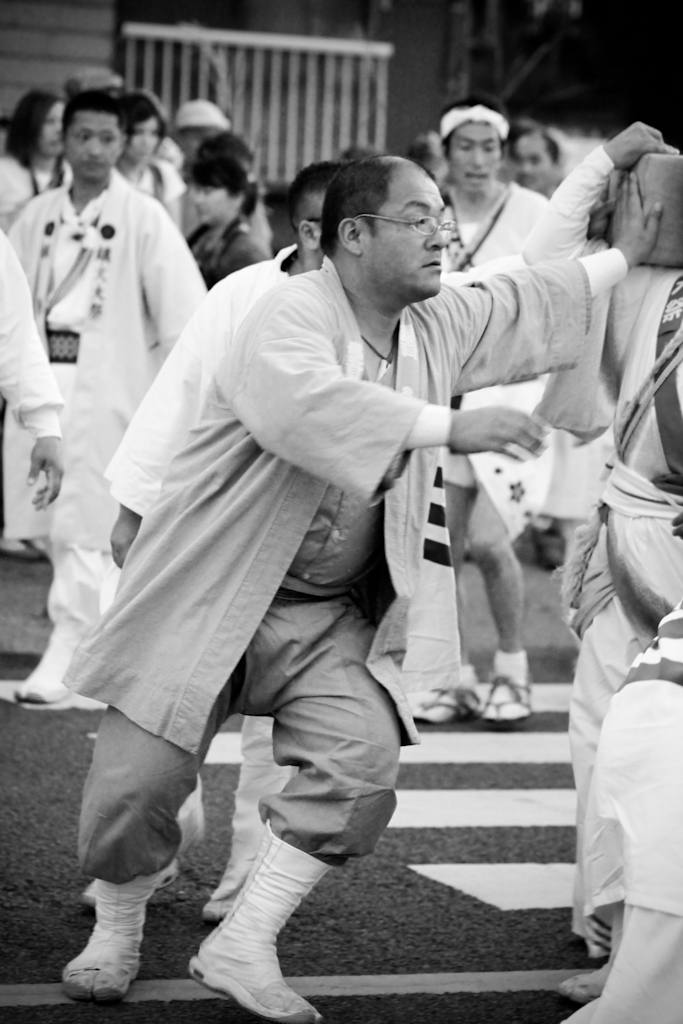 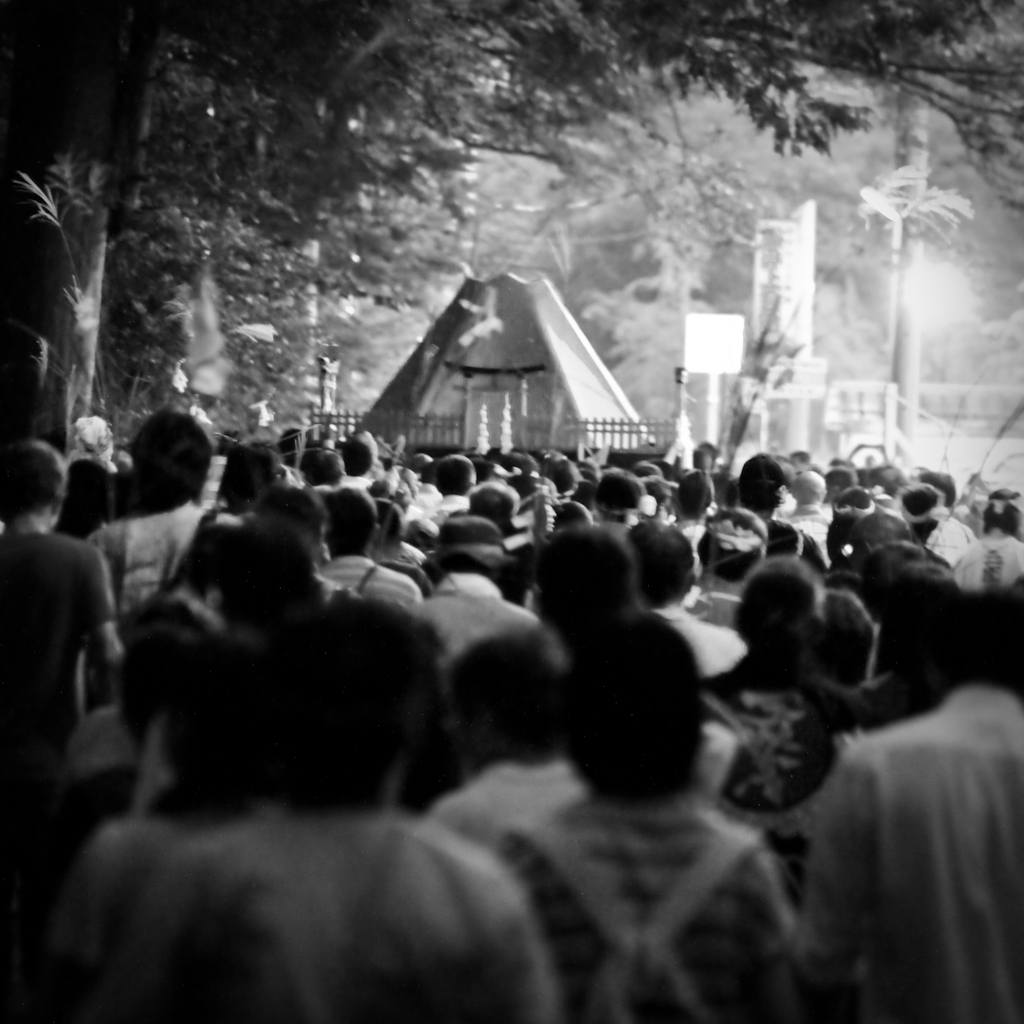 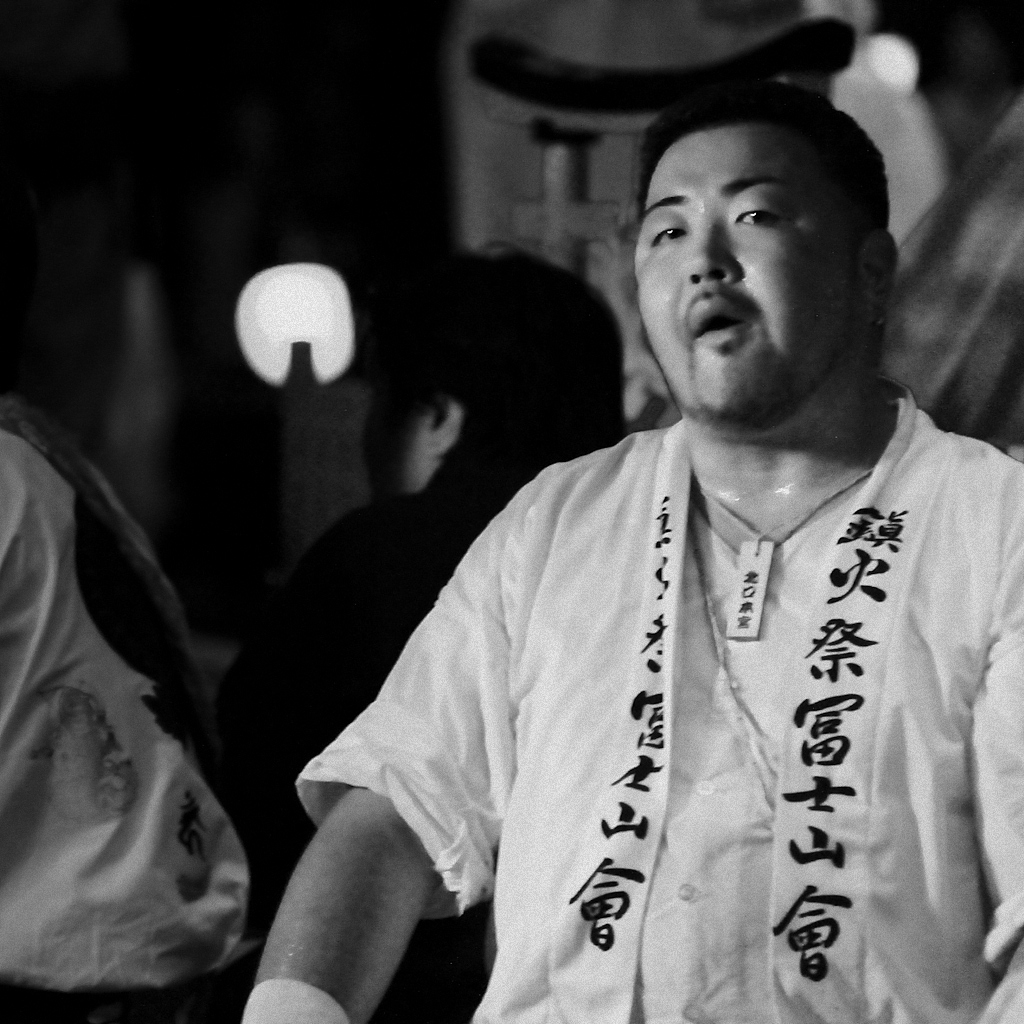 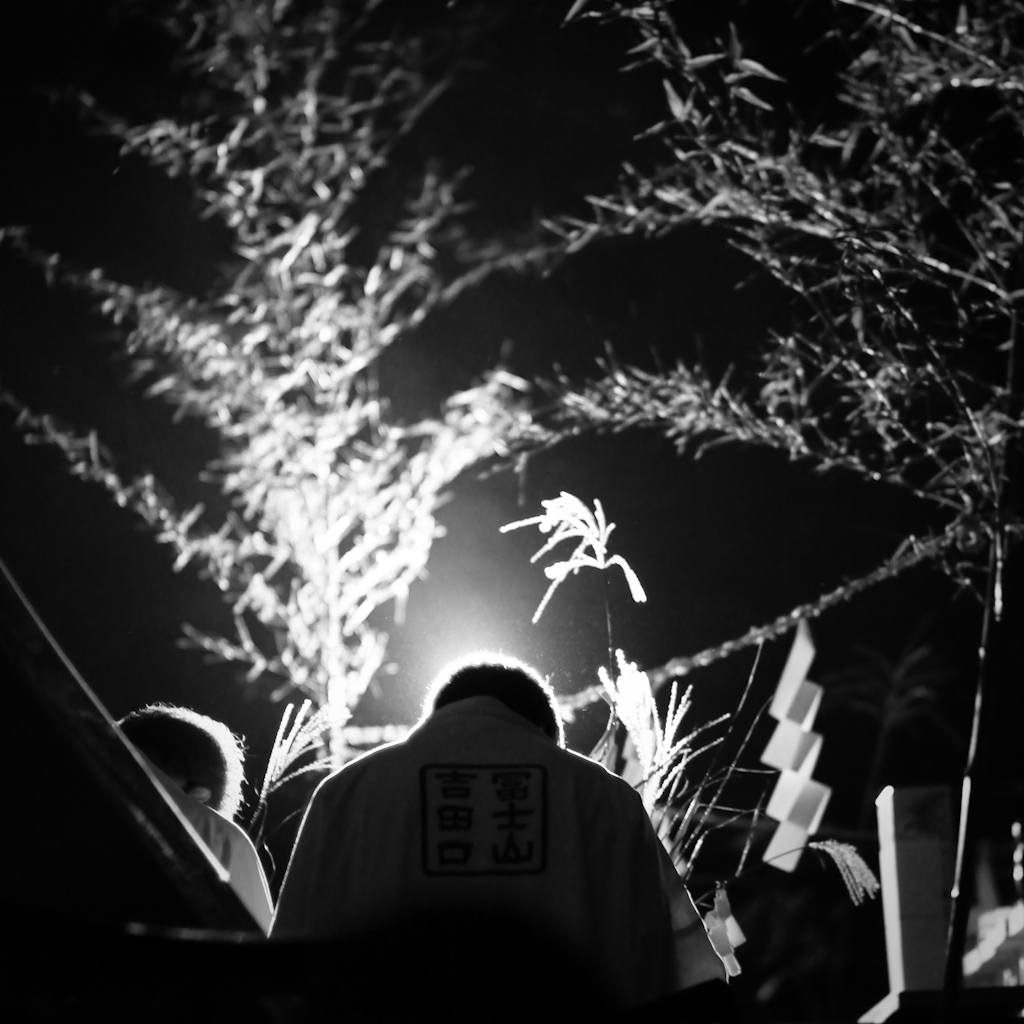 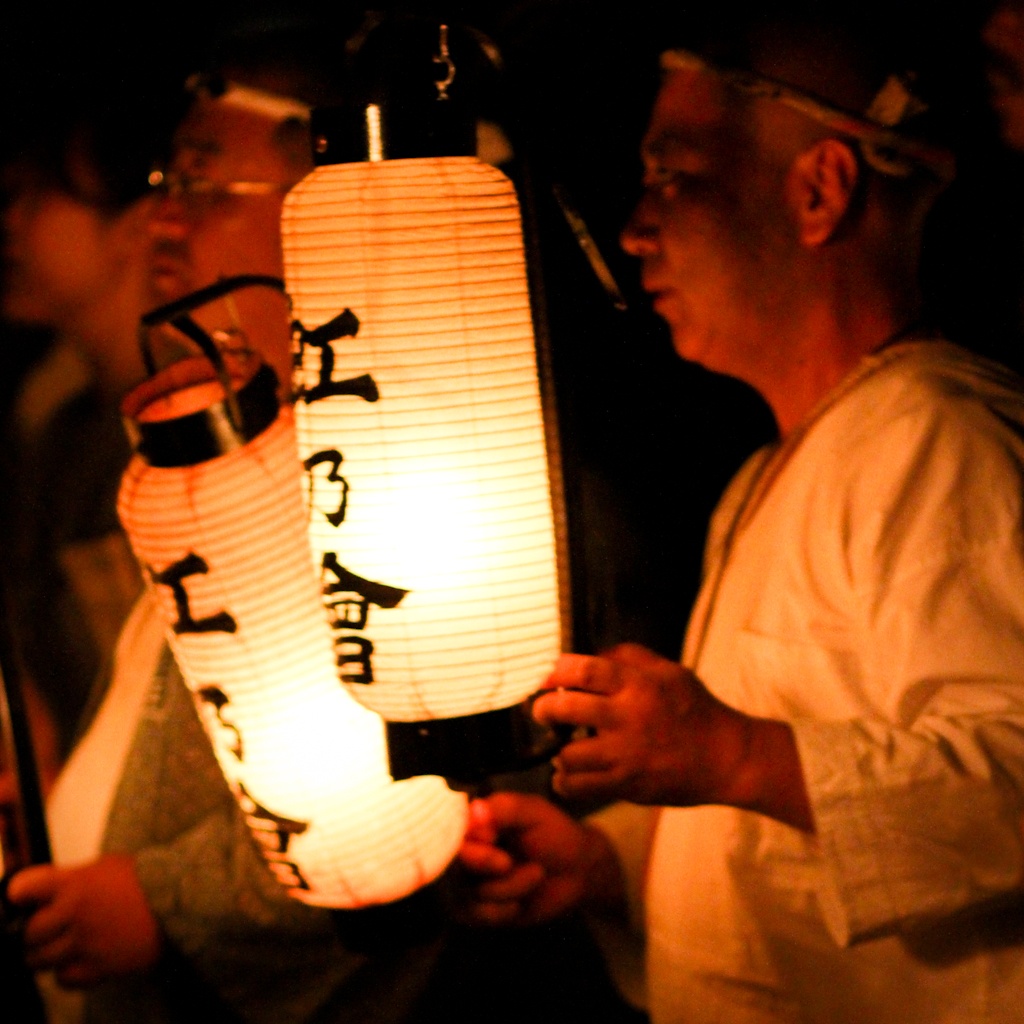 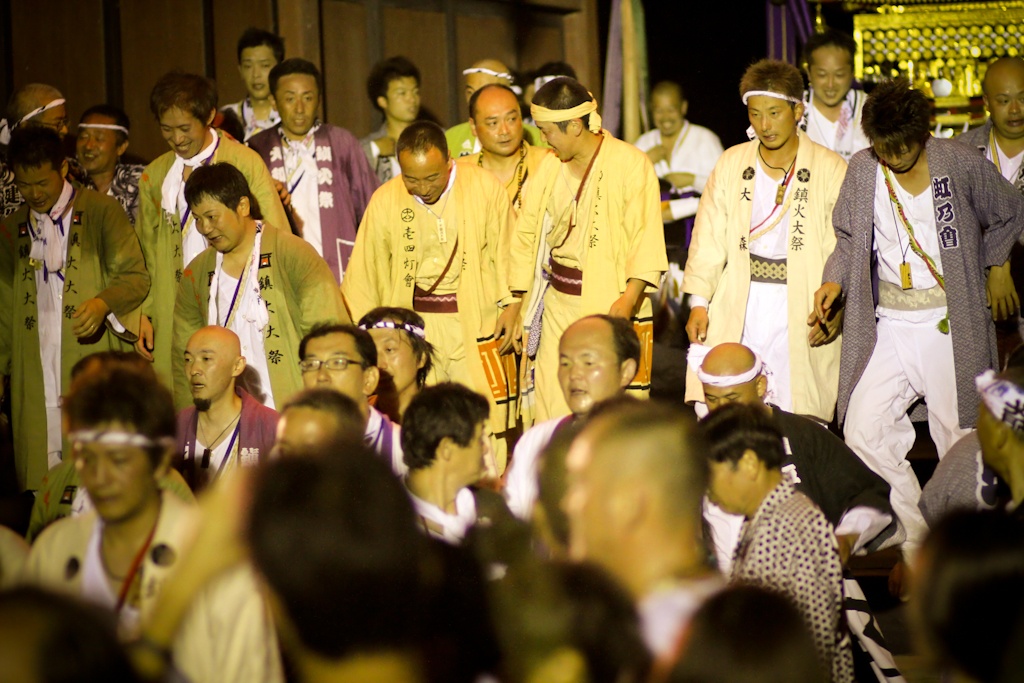 […] On the following day, the mikoshi are returned back to their respective shrines. Now, even though the Fire Festival is not as shocking as the Naked Festivals mentioned above, it is one of Japan’s most unique […]

[…] On the following day, the mikoshi are returned back to their respective shrines. Now, even though the Fire Festival is not as shocking as the Naked Festivals mentioned above, it is one of Japan’s most unique […]

Hi Jessica - one time questioner, long time fan! Thanks for this post and your husband's beautiful photos. Do you recommend both days of the Festival? And does the first day start at 3pm? And then it starts again on the second day at 2pm? Many thanks Kirstie

Hi Kirstie - thank you so much and happy to receive your first question! :) Yes, we would recommend both days of the festival as they are both different and exciting in their own ways. Yes, the first day starts at 3pm and then proceedings re-start from 2pm on day 2. It will be really hot though so you might not want to spend all afternoon following the portable shrines around, but the night time sections of the program - the fires on the streets on day one and following the portable shrine through the forest/around the shrine on day two are the highlights.

[…] For an inexpensive and traditional place to stay in Fujiyoshida, we recommend this guest house and if you’re visiting on August 26th-27th, we also highly recommend attending this festival. […]

5 of the Best Japanese Festivals in August

[…] Read more about this festival and how to participate here. […]