Held annually on the last Saturday and Sunday of August, the Koenji Awa Odori Festival (高円寺阿波踊り) is a dance festival that takes what energy Tokyo has left after the long hot summer days and endless fireworks displays and festivals, and turns the dial up for one last hurrah.

The Koenji Awa Odori Festival sees more than 12,000 dancers and musicians in around 200 groups known as ren, parade through shopping promenades and streets around Tokyo's Koenji Station. This Awa Odori festival attracts around 1.2 million visitors each year, and is second only in size to Tokushima's Awa Odori Festival in Shikoku where the “Fool's Dance” originated, making it one of the larger events on Tokyo's summer calendar.

Legend has it that the dance emerged spontaneously after Lord Hachisuka Iemasa distributed free sake (rice wine) to locals in celebration of the completion of Tokushima Castle in 1586. Locals spilled out onto the streets and in their drunken state started swaying back and forth. Others picked up commonly available instruments of the time and the song and dance were born. The song, known as the Awa Yoshikono chant, goes like this:

Other cries heard such as “yatto-sa” generally have no translatable meaning and are just in encouragement to the dancers.

The festival in Koenji has been celebrated since 1957 and now in its 58th year has long become a major city event. The female dancers wear yukata (summer kimono), gehta (wooden sandals) and perhaps the most distinctive part of all the festival, semi-circular straw hats best described as “inverted tacos”. The men and children wear happi jackets, shorts and split-toed tabi socks. 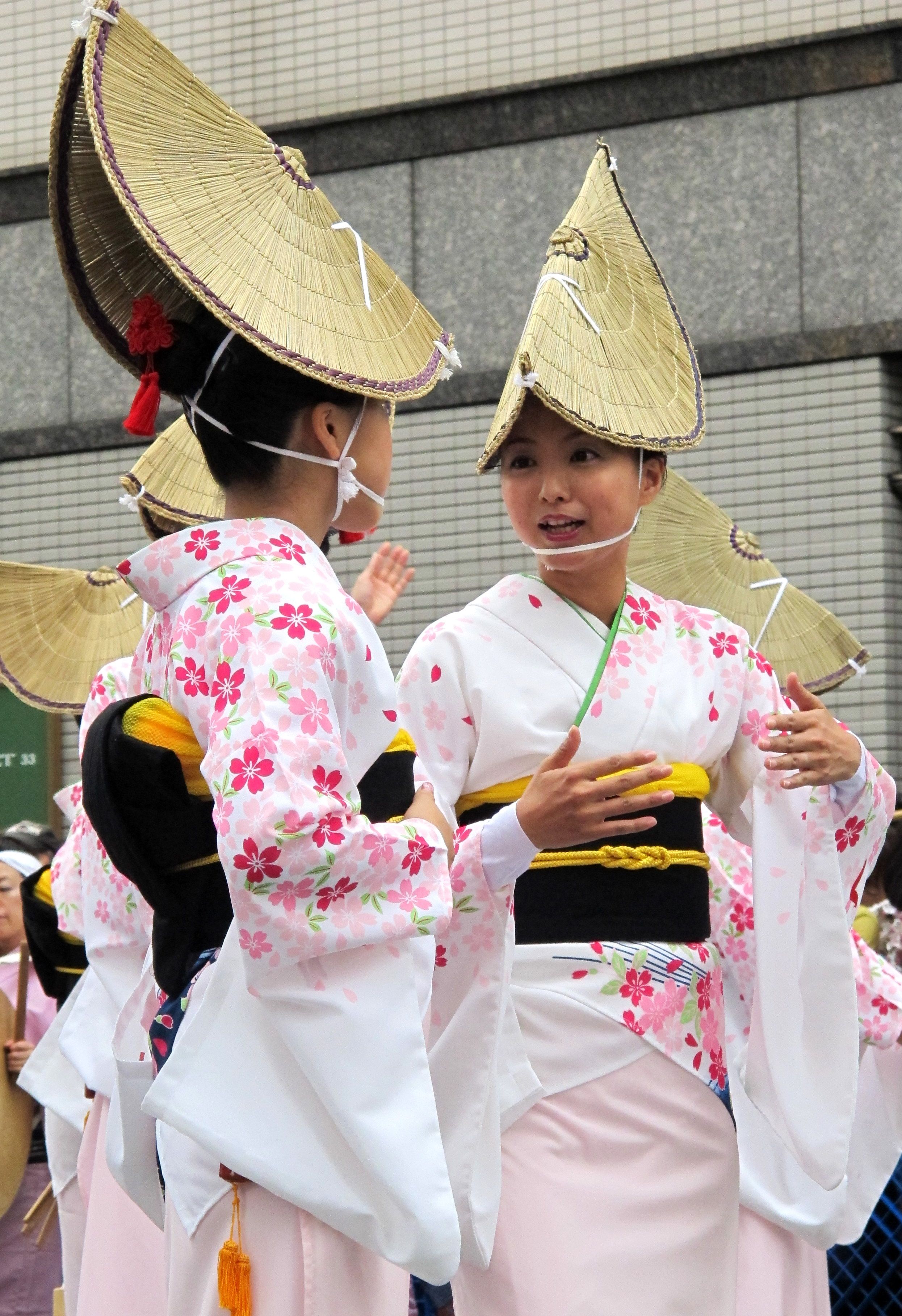 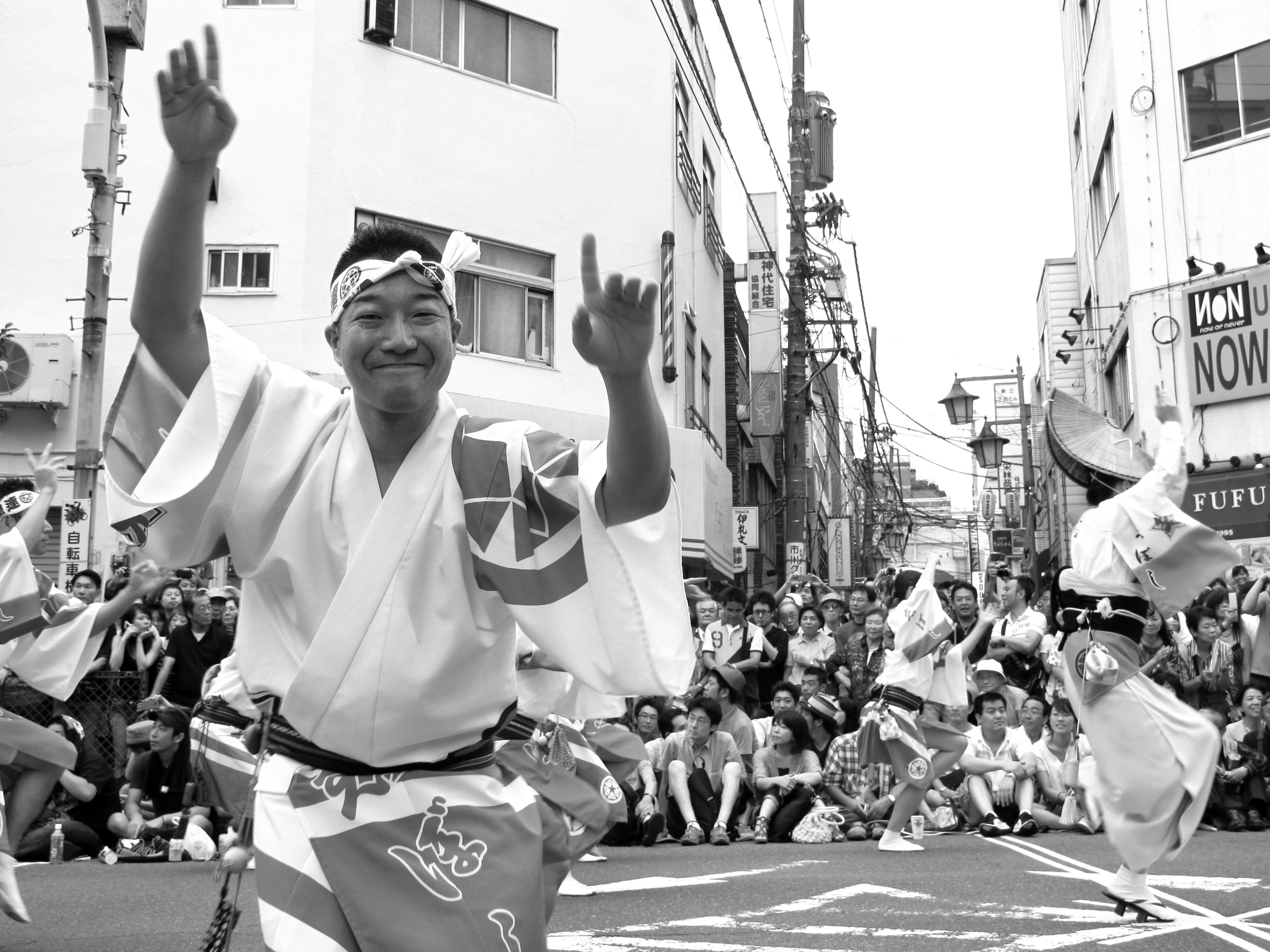 The women's and men's dance steps are different. The women's steps are described as graceful and harmonious while the men's more lively and wild. Many groups include both men and women dancing different steps while sometimes both genders perform the men's. Children participate too and usually perform the men's dance. Some groups keep to the traditional style while others perform their own versions and much of the fun is seeing the different interpretations each ren puts on the dance.

The Japanese summer is synonymous with stifling heat and humidity but occasionally the skies open up and bring torrential downpours. Unlike many others events, in the case of rain this dance festival continues. Spectators simply take out their umbrellas and dancers just dance harder, no doubt thankful just for the chance to be cool.

In 2011, the event was held during the daytime to observe setsuden, power saving measures instigated due to the disruption to Japan's power supply following the multiple disasters of 3.11. The festival's energy was tangible and I remember thinking that was the first time I had seen people really smiling since that day in March, as if Tokyo was announcing to the world that Japan was fighting and with time we would be stronger, more united than we have ever been. I wished that the world could see it, despite the international media having long forgotten. At the very least I willed this energy to echo to the people of Tohoku, to let them know they hadn't been forgotten.

In 2012, the festival was pushed backed to a slightly later time slot, but still not as late as the festival used to be. One blessing of the earlier time is that you have more time to enjoy the festive atmosphere post-parade before needing to scramble for late-night trains. The public cannot join in the dance parade but there is a bit of a free-for-all once the parade is over. The street party that follows with the endless food stalls and drink vendors is perhaps just as big a part of the festival as the parade itself.

Like all major festivals in Japan, it gets really crowded. For a prime viewing position, arrive at least a couple of hours in advance and bring something to sit on to mark your place. You can pick up a plastic sheet from 100 yen stores or even a plastic bag will do if you have something to stop it from blowing away when you're not sitting on it. The area around Koenji Station gets incredibly congested, especially the stampede to take the train home after the parade. You may wish to instead wait around and enjoy the summer night on the streets with the locals until the station calms down and/or walk to a nearby train station.

So join Tokyo in farewelling a busy summer and celebrate a folk dance that all started with a drunken night out some 400 years ago. 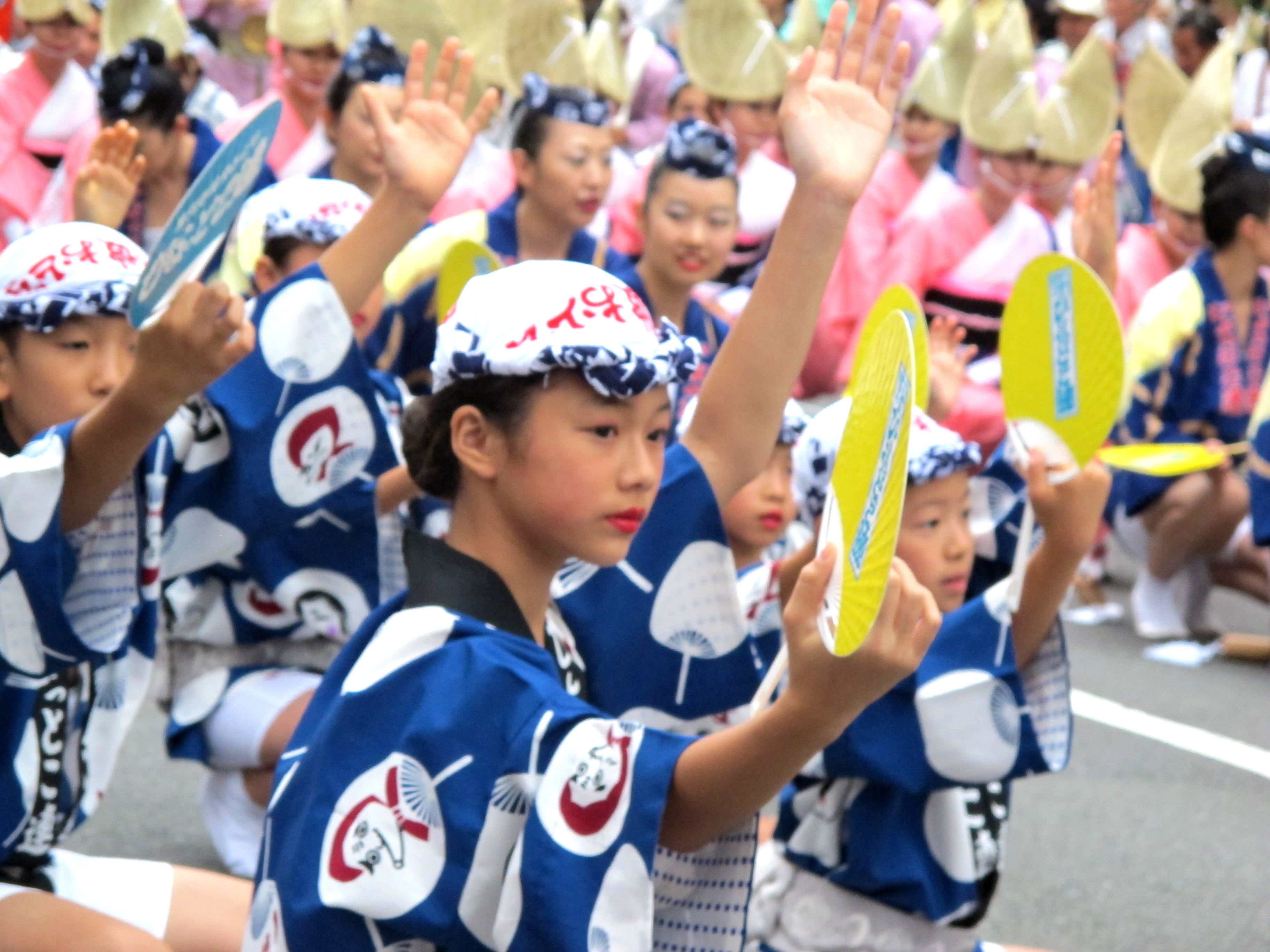 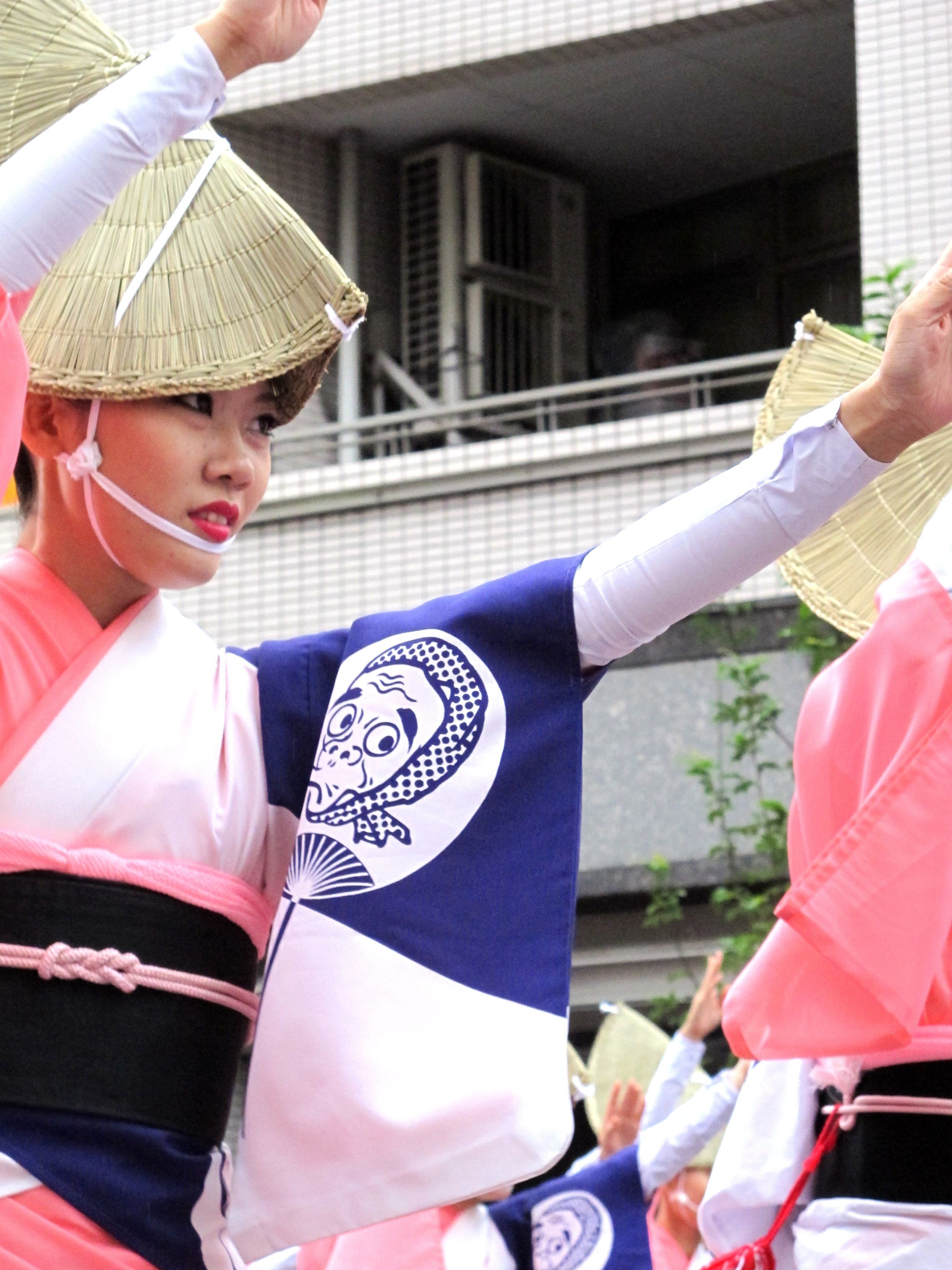 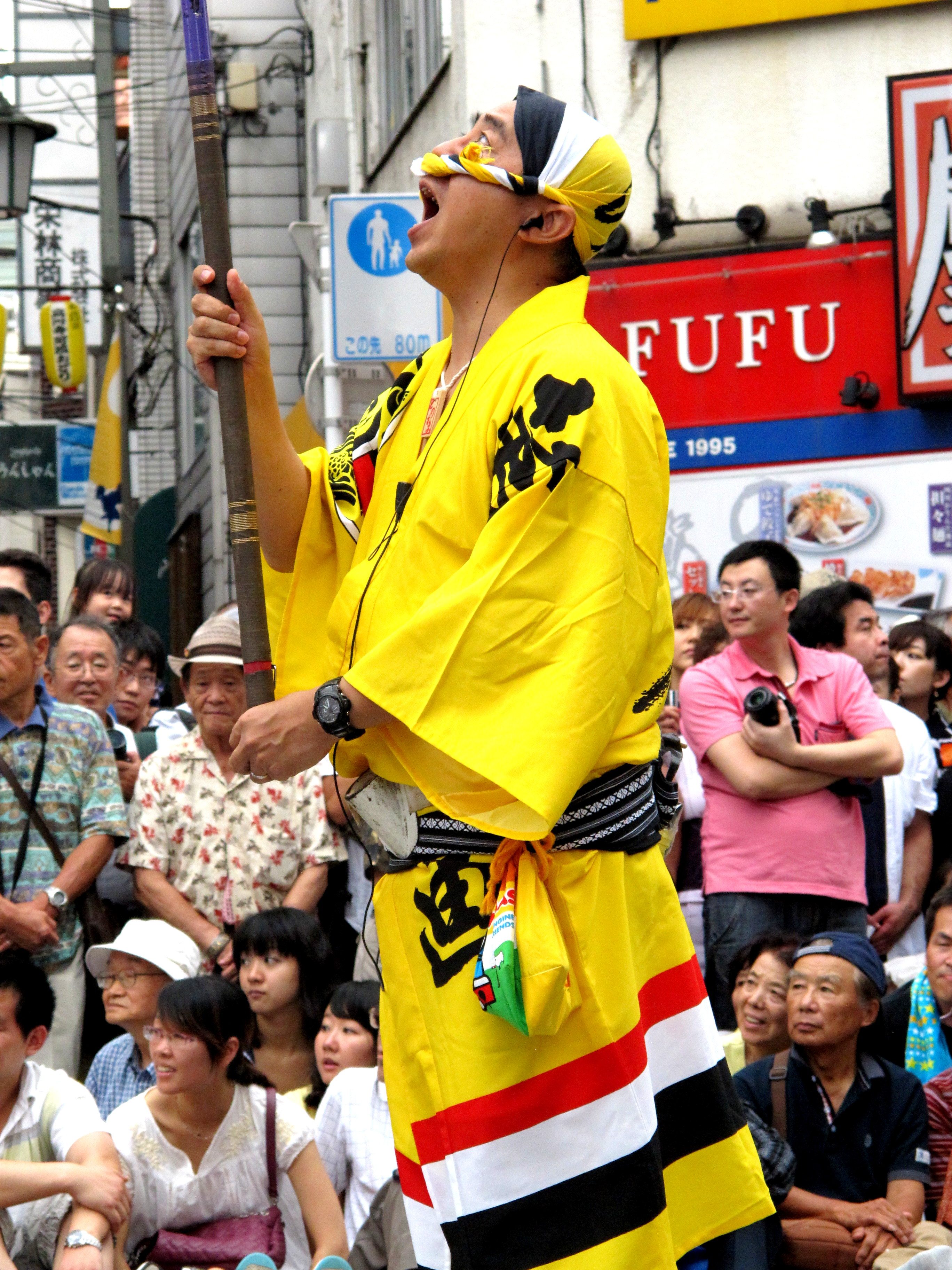 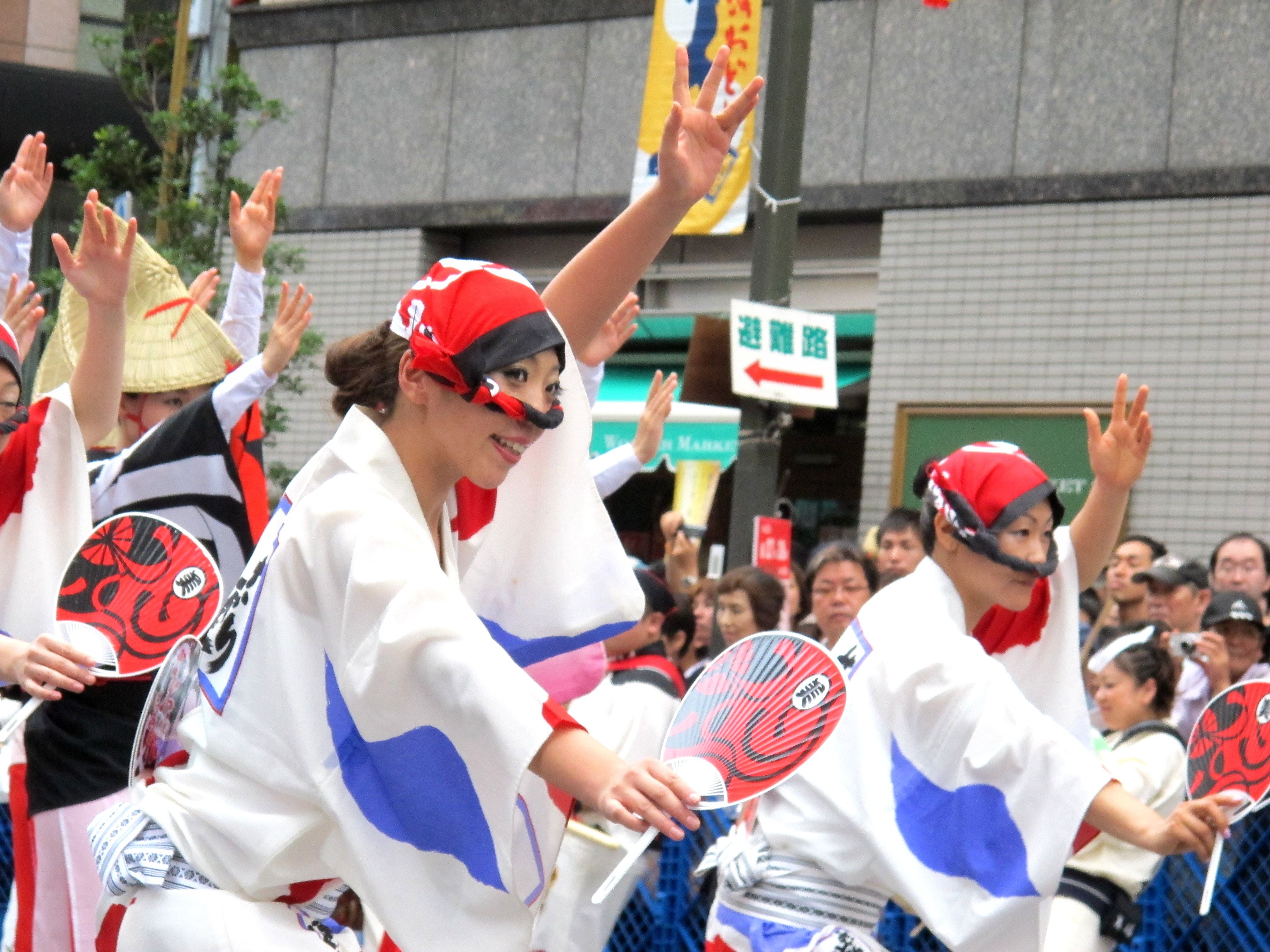 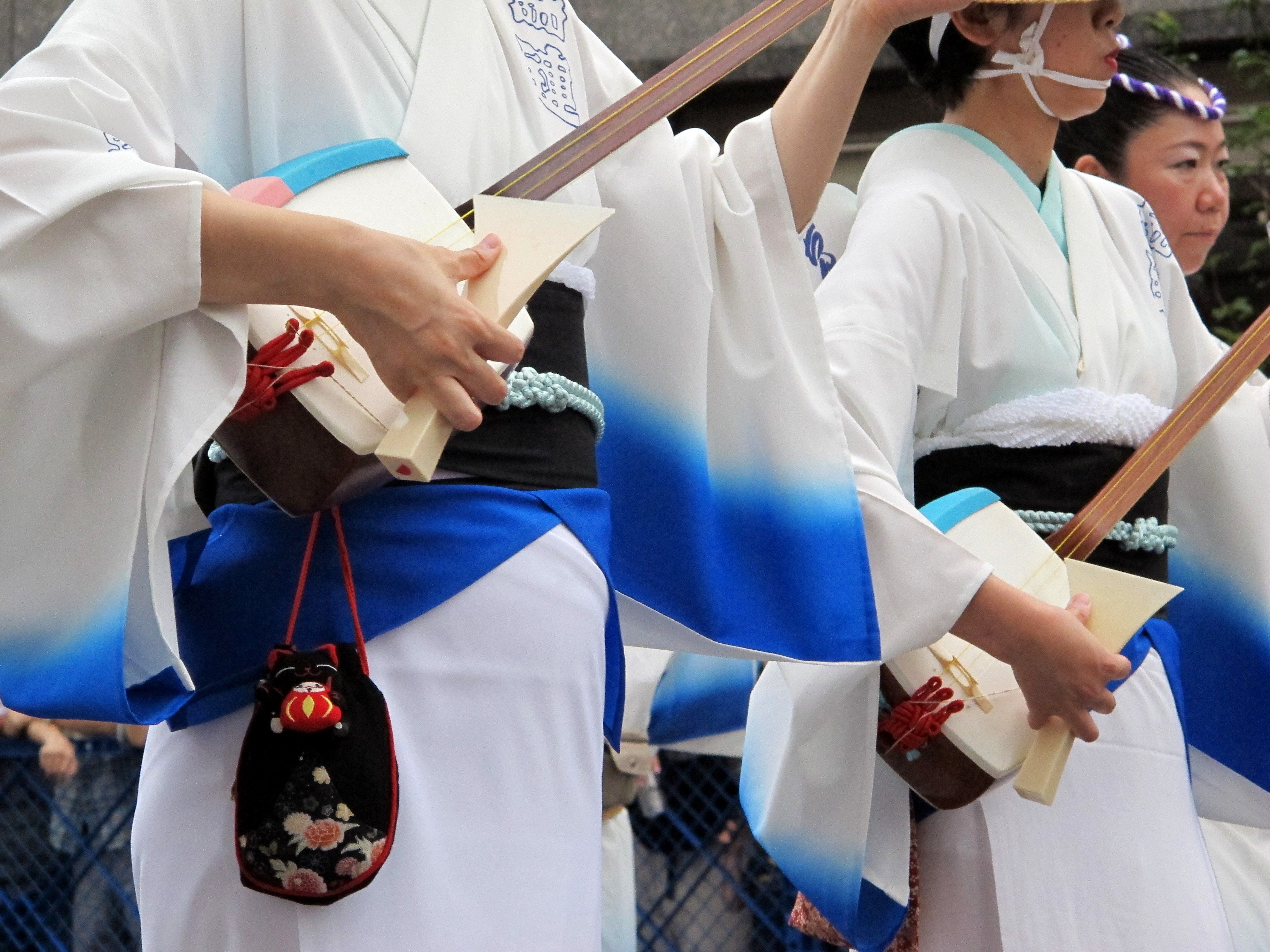 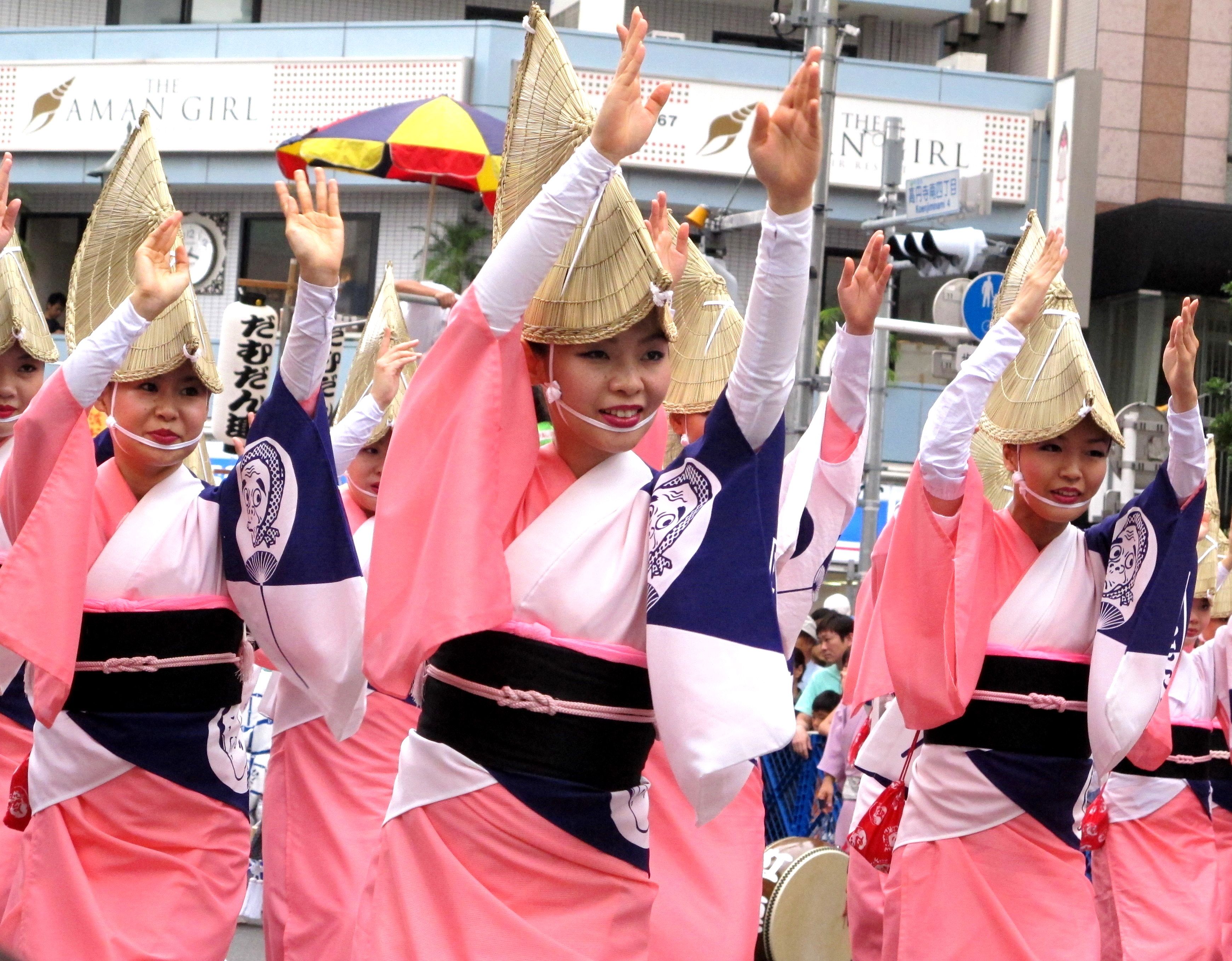 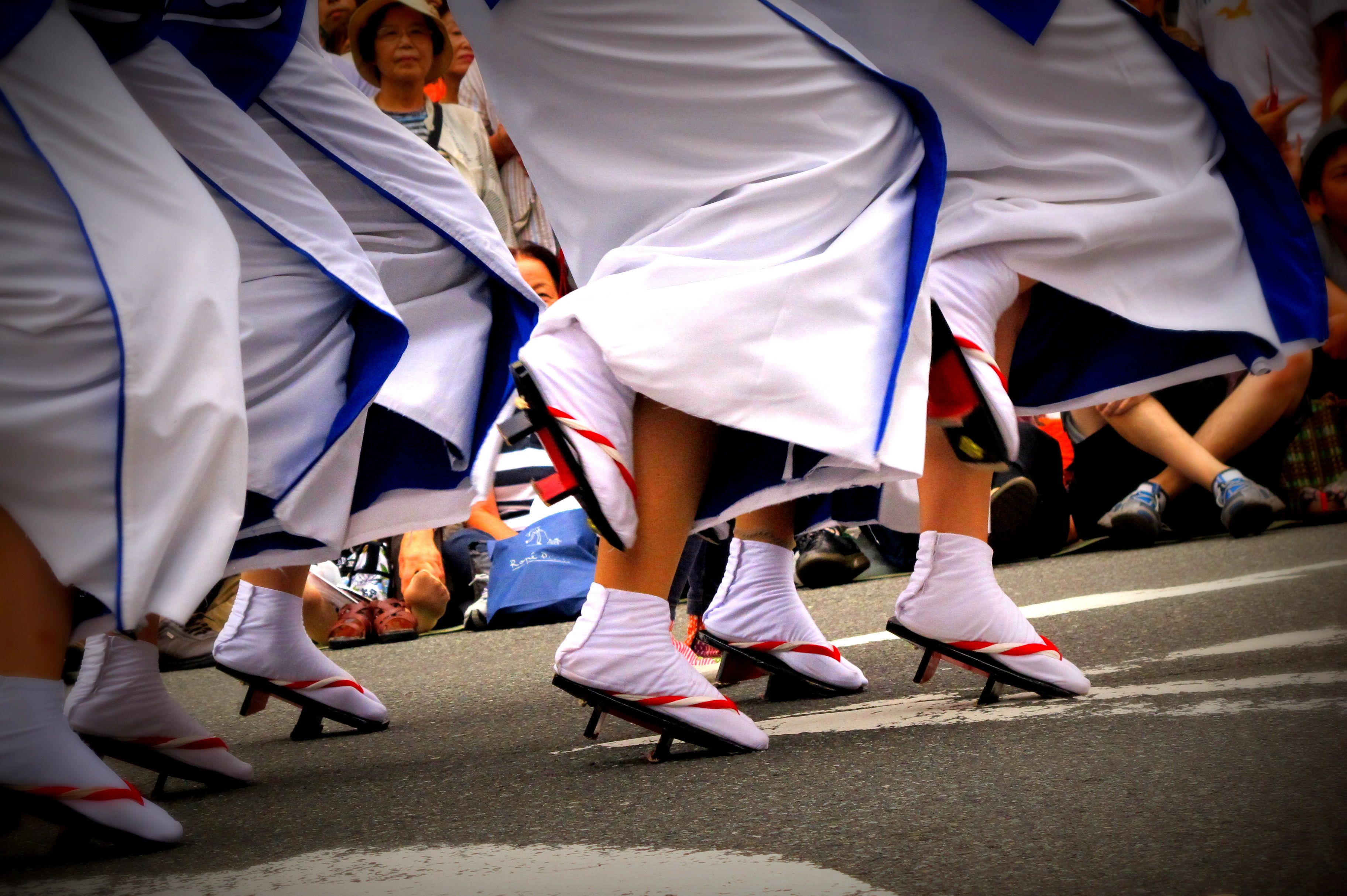 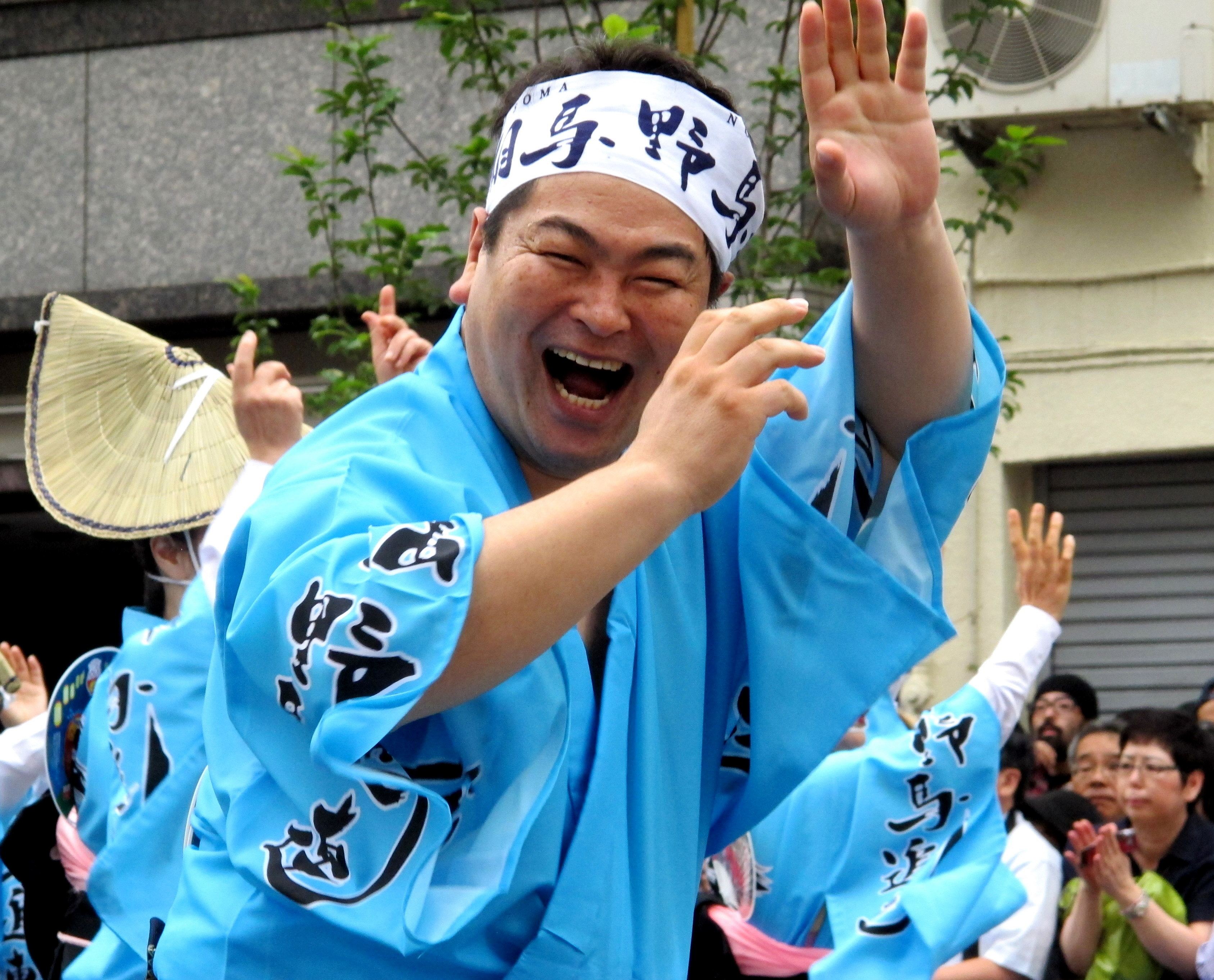 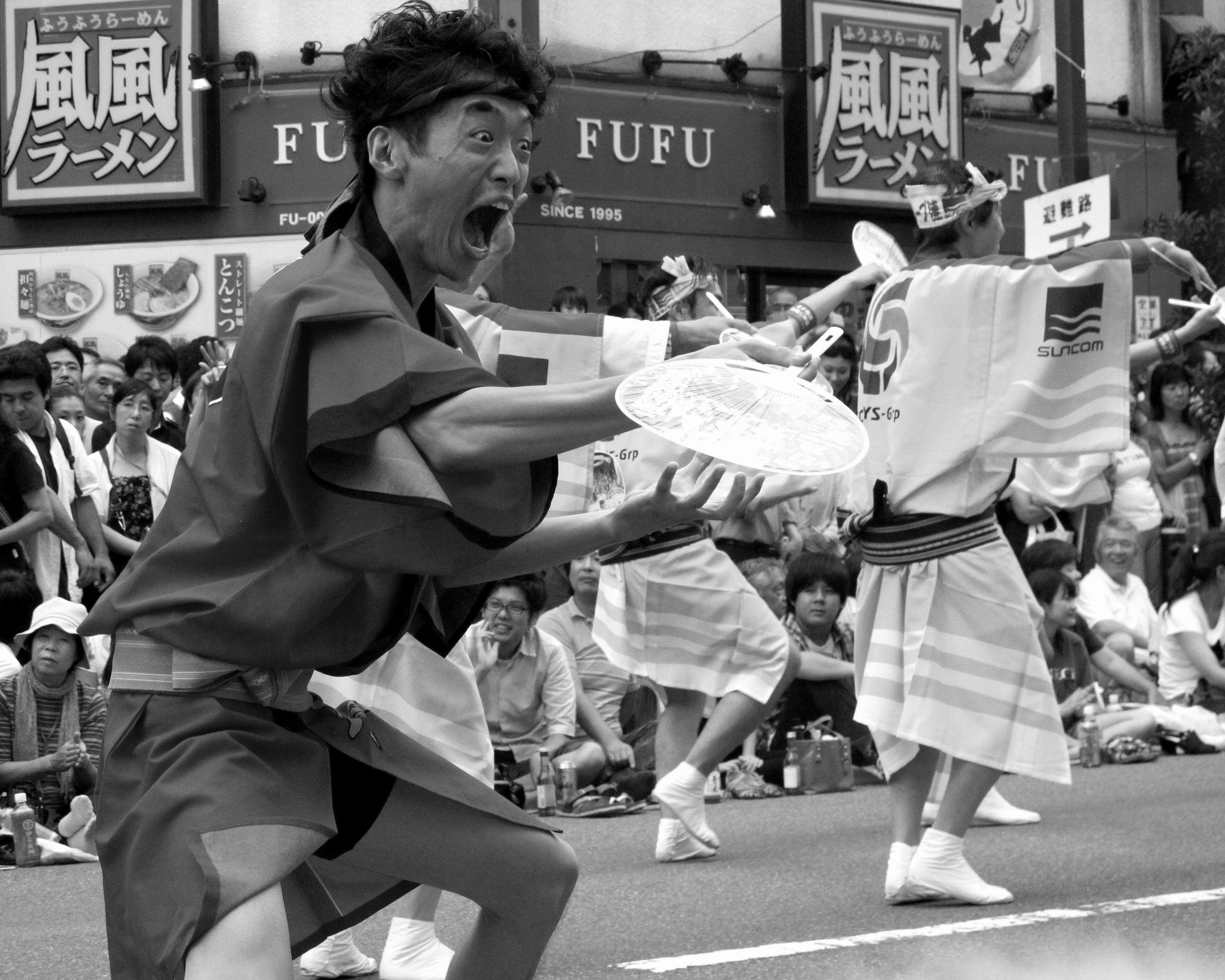 Location: Nine routes located on both the north and south sides of Koenji Station, as well as along Konan Street to the south.

Access: JR Chuo Line to Koenji Station. Note that not all rapid trains on this line stop at Koenji so best to check before boarding. All local trains do, however, and a local will get you from Shinjuku to Koenji Station in around 9 mins.

The Koenji Awa Odori falls on a big weekend for annual Tokyo dance events. You may also wish to check out:

A samba dancing parade with around 5,000 participants.

Location: Kaminarimon-dori and Umamichi-dori streets near Sensoji Temple. Click here for a map.

For more info, click here for the official site (sorry, Japanese only).

A big folk dancing event similar to that of Kochi Prefecture on Shikoku Island, with around 6,000 participants from all over Japan.

Location: On Harajuku-Omotesando Street, at Meiji-Jingu Shrine, in Yoyogi Koen Event Square, and on Keyaki-Namiki-dori Street in front of NHK.

For more info, click here for the official site (sorry, Japanese only).

[...] in Takumatsu, just over an hour’s train journey away. There are other Obon dances around Japan, including the second largest in Tokyo. You can also get in touch with the organisers in Tokushima and join the fools’ dance! If [...]

Great photos. The very first is my favourite. I love genuine candid shots and those of detail such as the shoe shot and hands holding things. I think I see a freckle faced girl amongst the photos as well. Bruce

Thanks, Bruce! Yes, even the Japanese are not immune to a few sun spots :) Thanks for stopping by, as always.

I'm with Letizia! We're going to need some of those straw hats!

Yep, with you on that one ladies!

such an interesting post (as always) - my favorite parts: the chant (the lyrics are fantastic!) and the straw hats (I want one!)

Thanks so much, Letizia! They are my favorite parts too! I've always loved the "fool's dance" and its participatory premise. And who doesn't want one of those hats?! :)