The Tori-no-Ichi (酉の市 – rooster market) is an open-air fair that takes place annually on the ‘Days of the Rooster' in November according to the Chinese zodiac.

On the days of the event, festival-goers visit temples of the Rooster, notably Juzaisan Chokoku-ji Temple in Asakusa, or shrines of the Washi (Eagle) to ask for good fortune in business.

The Tori-no-Ichi festivities center mostly on Tokyo, where the tradition originated, and visitors celebrate the festival by praying at Otori shrines, eating street food and buying auspicious rakes. 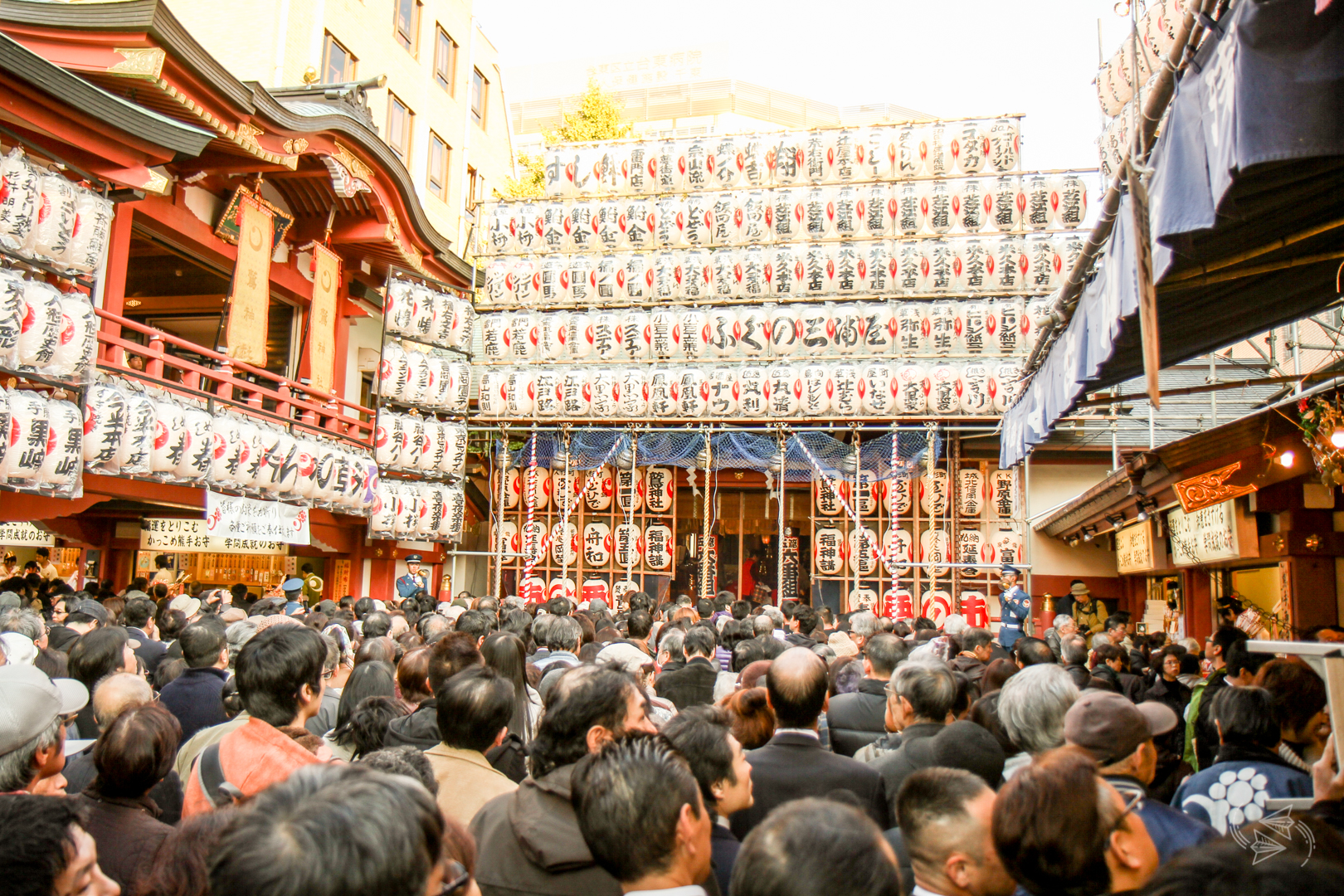 Queuing to ring the bells and pray at the shrine.

Held in November, the Tori-no-Ichi is said to be the first event to kick off celebrations for the New Year in Japan.

Formerly, the Japanese used a system of time called jikkan jūnishi (十干十二支), also known as kanshi or eto (干支), where the animals of the Chinese zodiac were assigned to every day of the year as well as the year itself.

The Tori-no-Ichi therefore takes place every 12 days in November – usually twice, but occasionally three times. The superstitious say that in years when it occurs three times, there will be many fires.

Find out more about the current Japanese calendar and how to read dates on your trip to Japan. 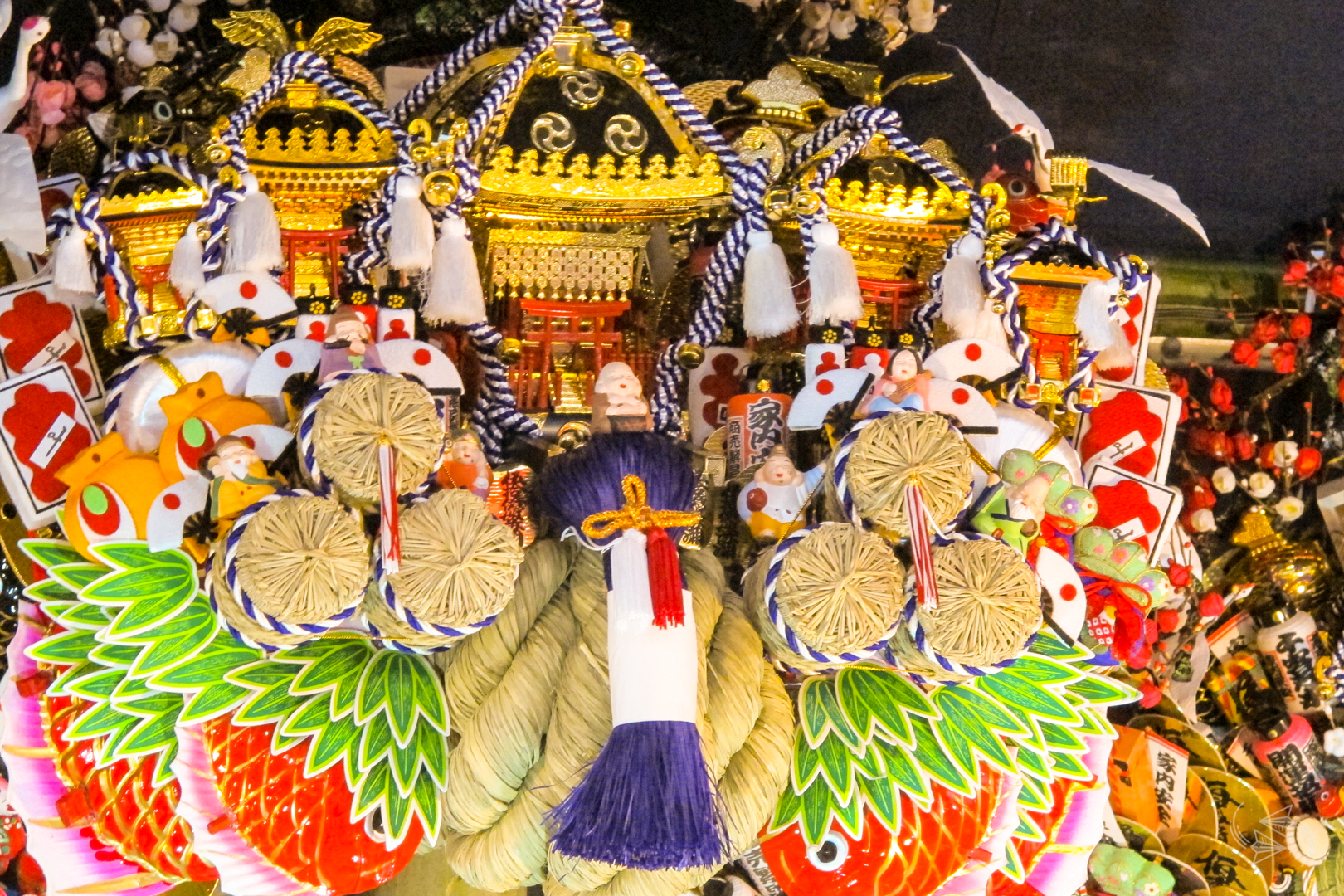 The origin of the Tori-no-ichi

The Tori-no-Ichi originated during the Edo Period as a harvest festival in a suburb of Tokyo called Hanamatamura, present-day Adachi-ku. It was an occasion for peasants to give thanks to Hanamata Washidaimyojin, the patron deity of the shrine.

Festival-goers would dedicate roosters to Hanamata Washidaimyojin and afterwards would release them at Sensō-ji Temple in Asakusa, the most famous temple in the area.

The Tori-no-Ichi at Otori Shrine in Hanamatamura became a popular event and an occasion for townspeople to gather and gamble in the streets surrounding the shrine. When the government prohibited gambling there in 1776, the prosperous fair gradually moved its patronage over to Chokoku-ji in Asakusa.

The Shin no Tori at Asakusa's Chokoku-ji was notable because a statue of Washimyoken Bodhisattva was enshrined there in 1771, but really took off thanks to its location right by the Shin-Yoshiwara pleasure quarter, Edo’s adult entertainment district. As a rule, the courtesans were not allowed to leave, but on the two or three “days of the rooster,” they were permitted to go out and visit the market. Akin to a modern-day celebrities attending a public event, people would gather just to catch a glimpse of them.

The market was also an excellent opportunity for peasants to sell their wares to pay off debts. It is believed this is the origin of the festival's link with economic prosperity. Rakes were a common practical item sold, that later came to represent “raking in wealth.”

Items bought at the market were considered to be the first important purchases in the lead-up to the New Year, and the Tori-no-Ichi became the event that signified the beginning of the New Year period and setting one's sights to success in the coming year. 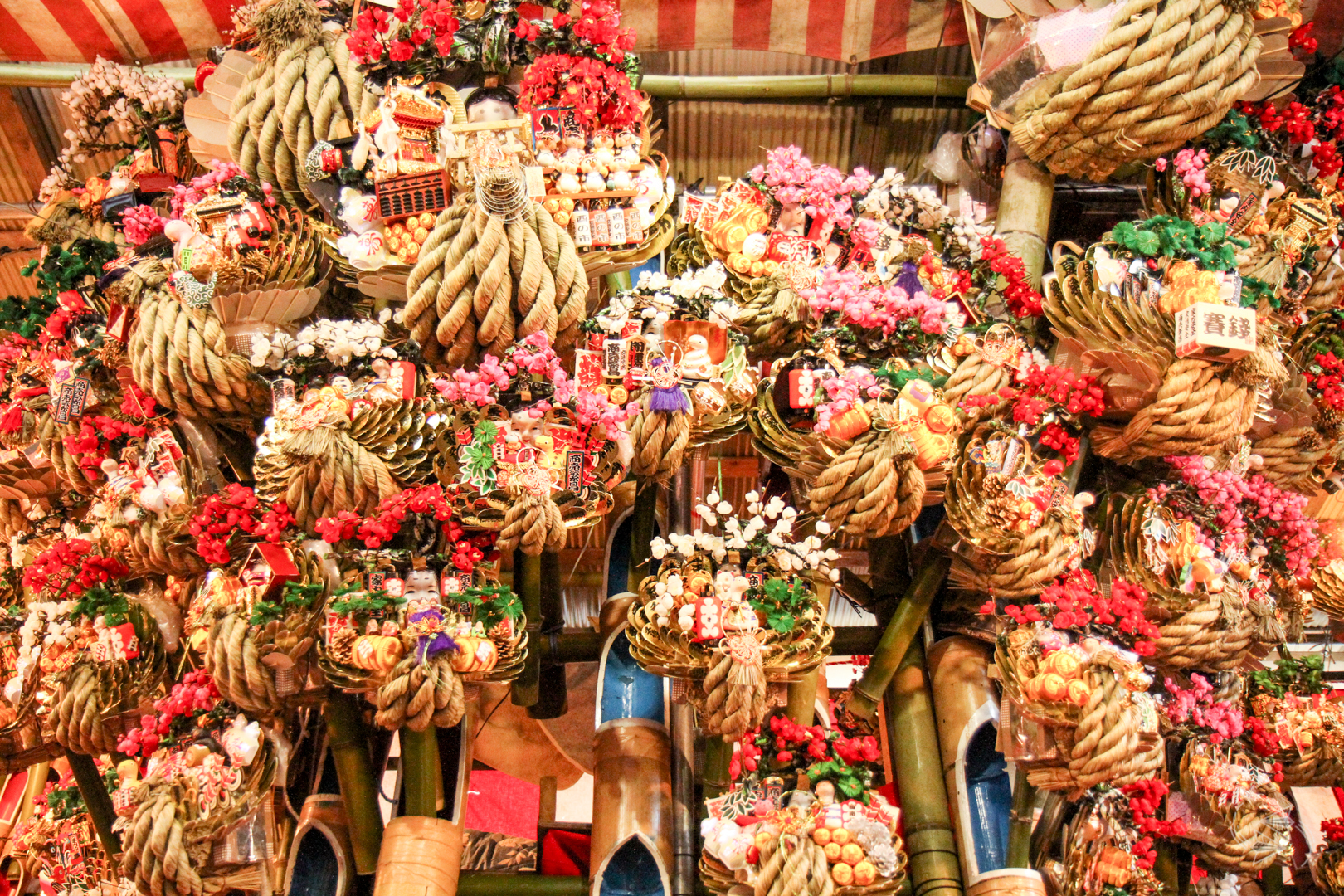 Boost your business success with a lucky bamboo rake

The defining item of the market is the lucky bamboo rake known as kumade. In Asakusa, you can find more than 100 stalls selling them in various sizes and price brackets.

Kumade literally means “bear hand” and gives the imagery of “clawing” in wealth. They are adorned with items said to bring good luck and, once purchased, the name of the buyer is written on a wooden plaque and added to the arrangement. 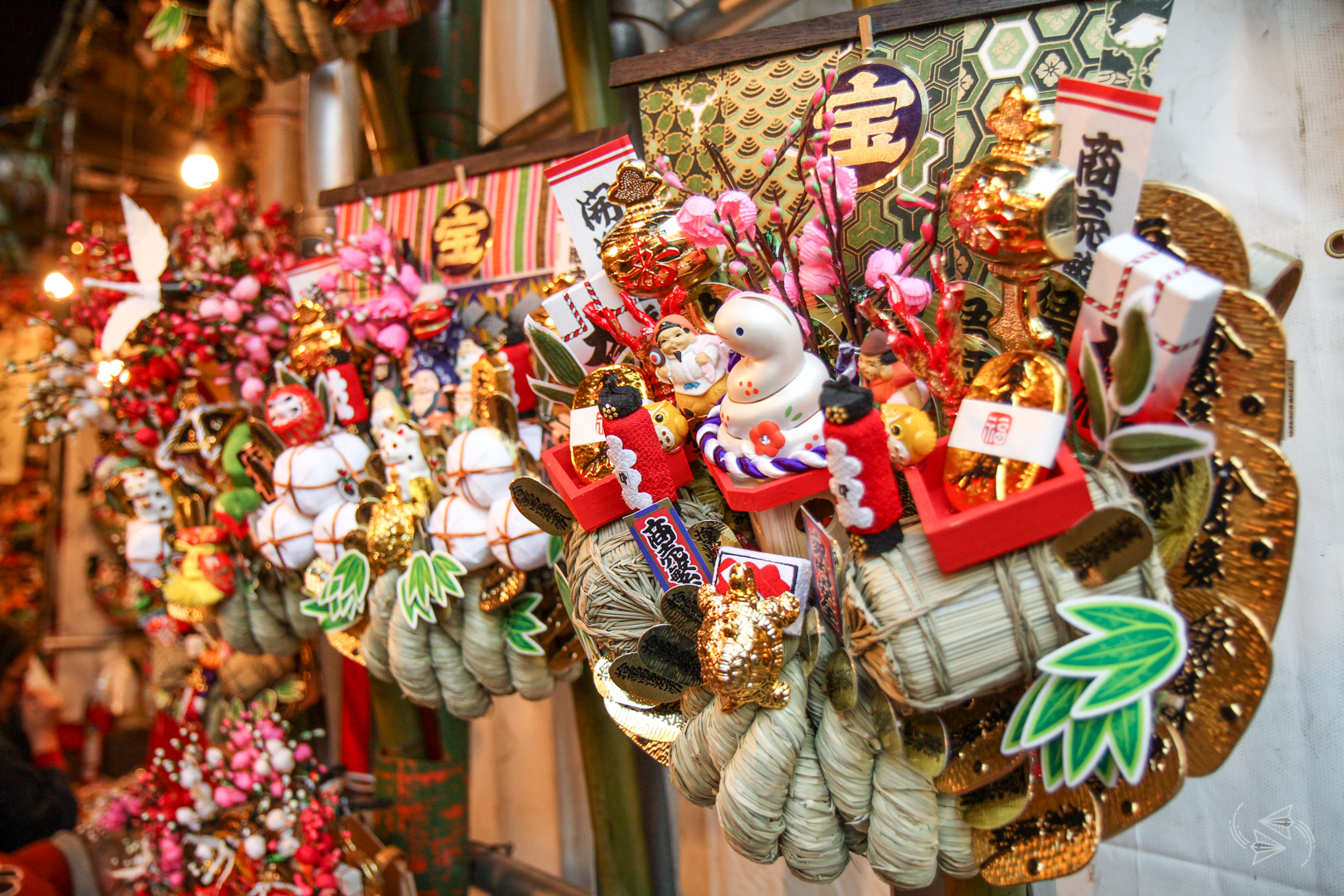 The smallest and simplest rakes start at around $25, while the larger and more elaborate ones go for several hundreds of dollars. According to tradition, one should return the previous year's rake to the shrine and upgrade to a slightly bigger one each year. The bigger the rake, the more luck it is said to bring. Some are so large and heavy that they cannot be carried by the buyer alone. 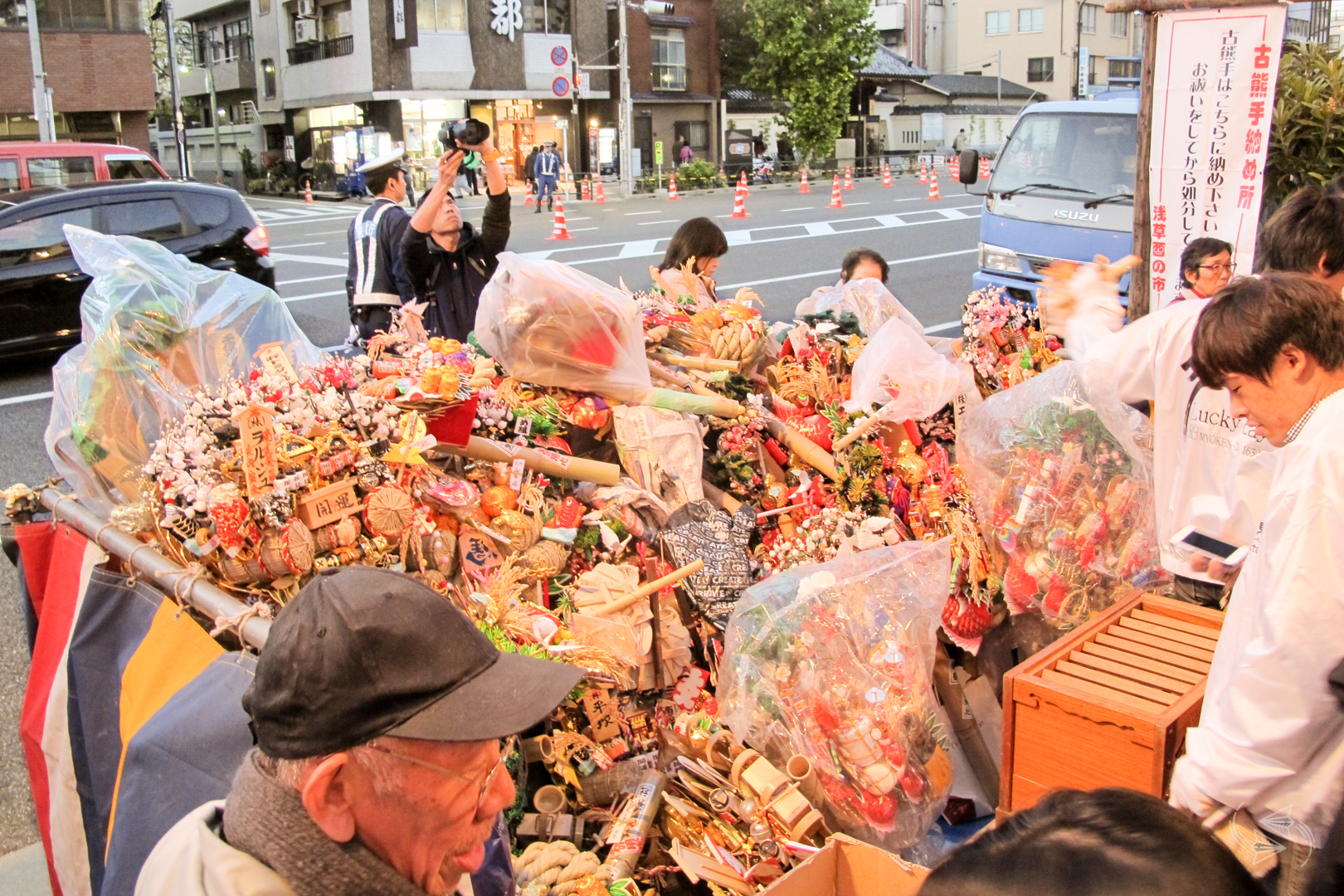 Last year's rakes being returned to the shrine.

Sellers offer free sake to attract potential buyers and seal the deal with a ritual known as “tejime” in which they rhythmically clap their hands in harmony.

In Japan, this is a tradition that ceremoniously ends a celebratory occasion and in this case is said to pass the rake's good luck over to its owner.

Food is a huge part of Japanese festival culture and the Tori-no-Ichi is no different. Some 200 food vendors are set-up in the vicinity of Asakusa Otori Shrine and many people show up just to sample the eats. A particularly famous dish is the Yatsugashira potatoes, said to aid fertility.

There are other traditional foods linked to the old days of the festival, such as “Kashira no Imo” (steamed taro) and “Koganemochi” (a type of Japanese rice cake). In addition to the bamboo rakes, they were sold as a kind of good luck charm to those hoping to be successful in the world of money and business. Today, only one shop sells the “Kashira no Imo” at the Asakusa Tori-no-Ichi and sadly the “Koganemochi” is no longer sold. However, a Japanese cake called “Kirizansho” is sold in its place.

When to visit the Tori-no-Ichi in Asakusa

The event runs from midnight until midnight, making it easy to drop by at any time of the day or night. The festival becomes its most lively, however, after nightfall when the after-work crowd starts arriving.

Popular Otori shrines can get so busy that the grounds are closed off to new entrants until the rush dissipates. Queues in Asakusa extend all the way down the street to ring the bells and pray for success at the shrine. If you would like to participate, we recommend arriving early to visit the shrine and then hanging around to experience the market at night. 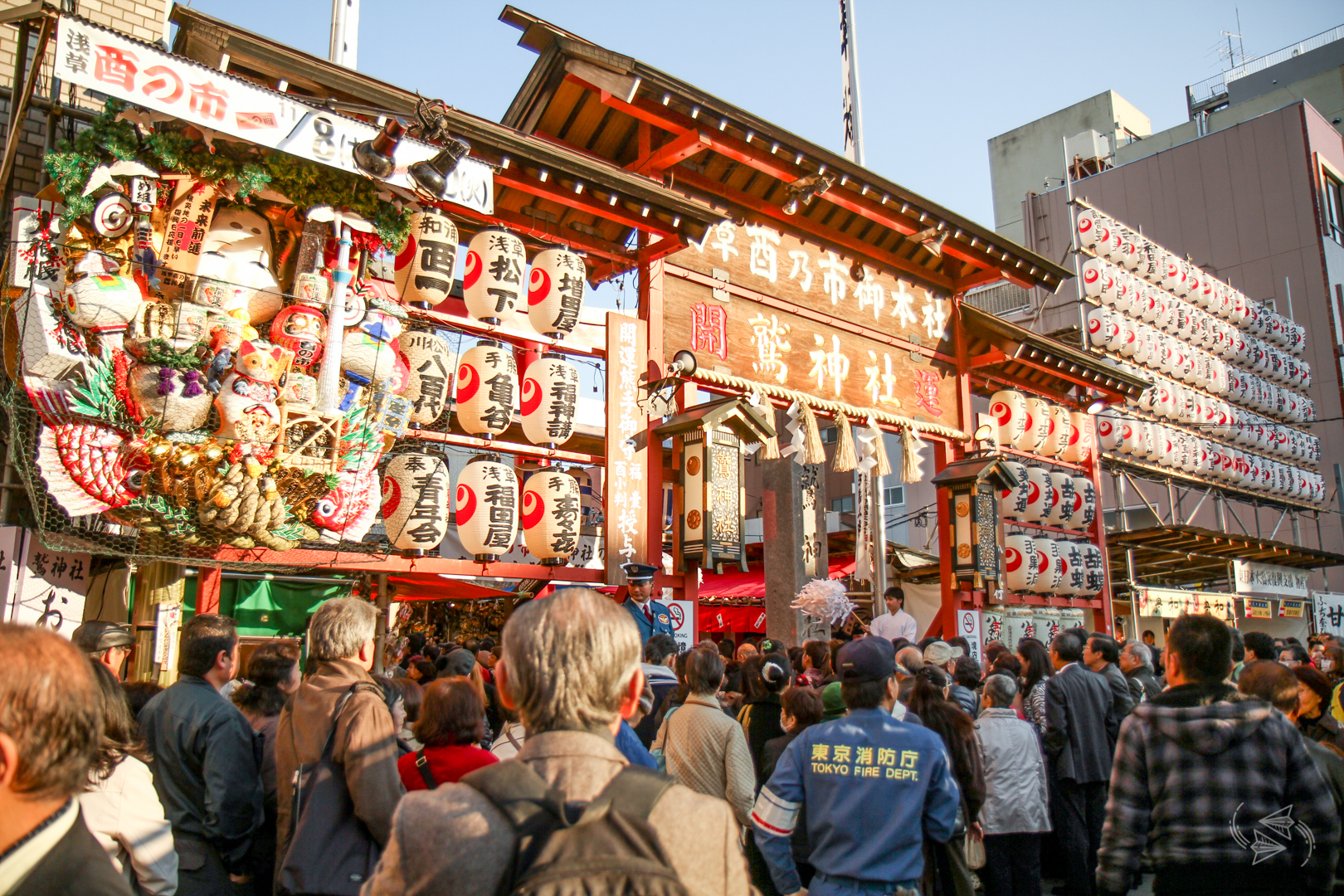 The most well-known Tori-no-Ichi is the one held in Asakusa and has become synonymous with the festival, however, similar fairs also take place at some 30 shrines around Tokyo, including Hanazono Shrine in Shinjuku, Kitano Shrine in Nakano, Ebara Shrine in Shinagawa and the Otori Shine on the grounds of Okunitama Jinja in Fuchu.

Watch our video of things to do in Fuchu, Tokyo.

The major Tori-no-Ichi outside of Tokyo is held at Otori Taisha in Sakai City, Osaka.

How to get there

The Asakusa Tori-no-Ichi takes place at Juzaisan Chokoku-ji Temple (AKA Asakusa Otori Shrine) and is about 8 minutes walk from Iriya Station (Shitaya Gate – Exit 4) on the Tokyo Metro Hibiya Line.

Open location of the Asakusa Tori-no-Ichi in Google Maps.

For details of this year's Tori-no-Ichi in Asakusa, please visit their website. 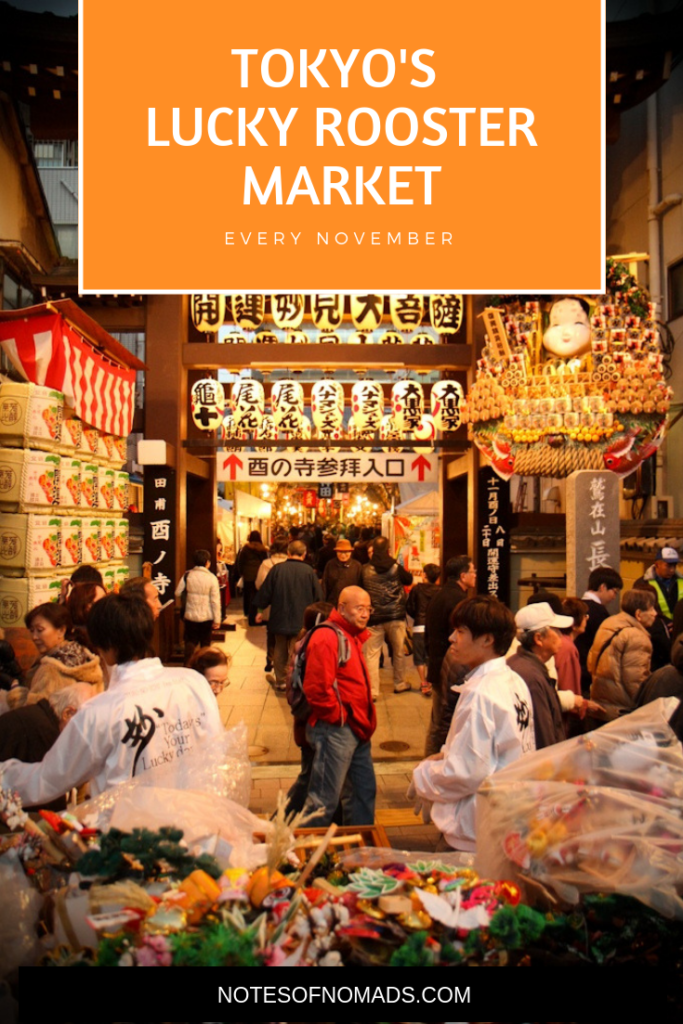 Cool! I have never heard of Tori-no-ichi. Would love to spend more time in Japan and experience all of these awesome festivals and cultural practices.

Thanks Riana! There are just so many interesting events here. Hope you can spend more time in Japan to experience more of them in the near future!

You make me miss Japan so much!

It's such an amazing place, isn't it! Looking forward to getting back there next month. You'll have to come and visit. :)