The Tanabata story is one for all you hopeless romantics out there. While there are many versions, this is one of the most popular and also my favorite.

Everything was perfect until the love-struck couple began abandoning their work duties to spend ever-more time together. Orihime’s father, the King, became angry and banished Hikoboshi to the other side of the Milky Way. Heart-broken, the two reluctantly carried on with their work on their respective sides of the galaxy.

Touched by his daughter’s deep sorrow, the King decided to allow the couple to meet, but only on one day of the year (the 7th day of the 7th month). The condition was that Orihime had to complete all her tasks by this date. Of course, she threw herself back into her work with renewed passion and completed all her tasks ahead of time.

It is said that on the first reunion date, the couple were still blocked by the Milky Way’s river. While the King had given them the time off to meet, he hadn’t given them the means to do so. Orihime cried and cried with such sorrow that a flock of magpies took pity on her and made a bridge out of their wings, allowing her to cross to the other side and be reunited with her husband.

As magpies don’t fly when it is raining, if it rains on Tanabata, the couple cannot meet and have to wait until the following year. That’s why the Japanese hope for clear skies on this day.

Unfortunately this July 7th was one of the dreariest days we have had in a while. Let's hope that the rain stopped long enough for the magpies to help Orihime cross the river or that the Sky King goes by the lunar calendar which sees the date fall a month later on our August 7th, like celebrations in Sendai.

One popular Tanabata custom is to write a wish on a strip of paper known as tanzaku and then tie it to a bamboo tree in the hope that the wish will come true. The wishes are often related to study/work ethic or ability in the same spirit as the industrious Orihime. I have been making tanzaku with my young students all week. Their wishes have ranged from long-term aspirations and goals such as “I want to be a school teacher” to more immediate desires like “I want to eat lots of watermelon!”

Here's my tanzaku for this year. What's your wish this Tanabata? 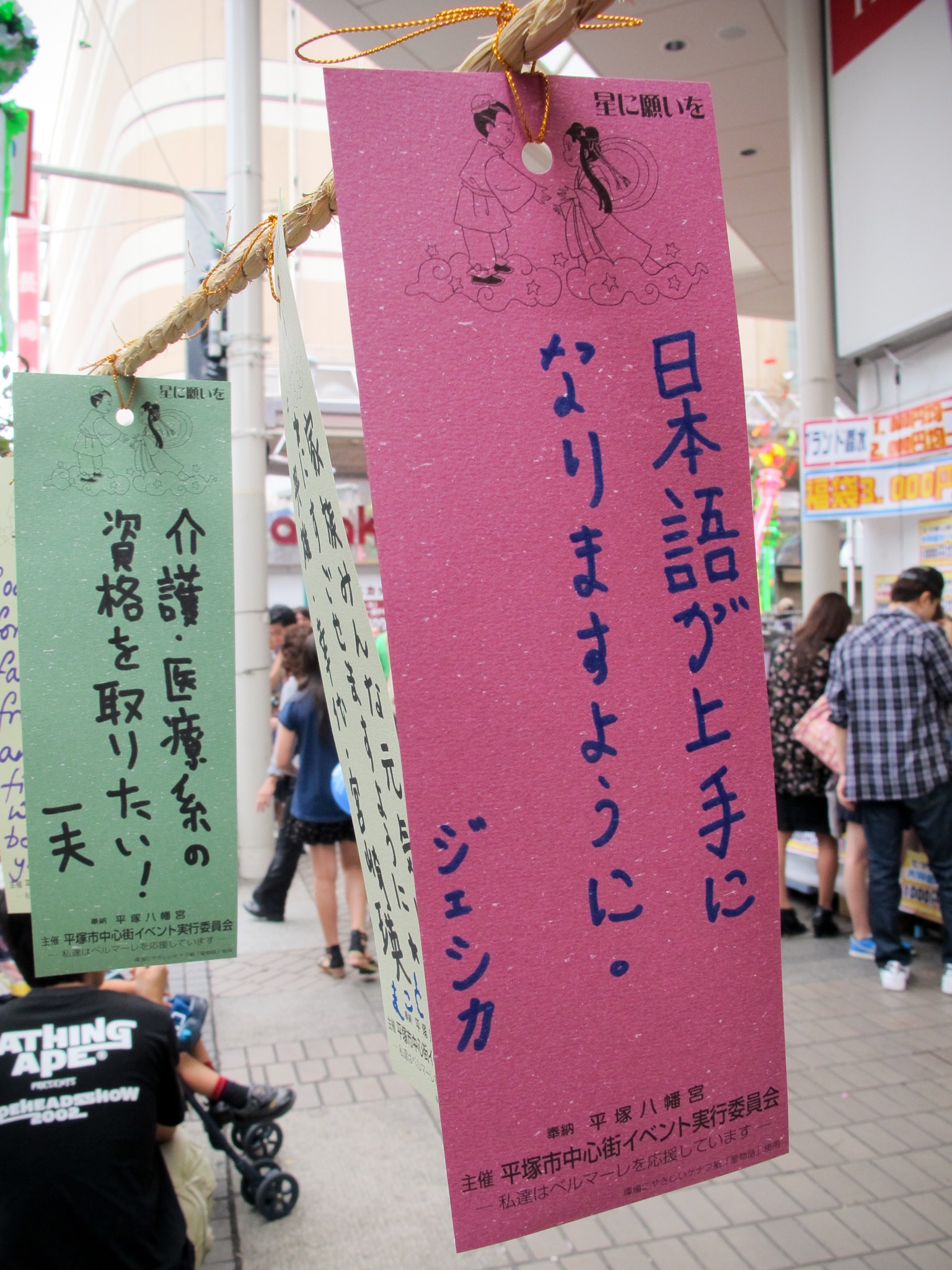 Wishing for my Japanese to get better…

One of the schools I work at even had a Tanabata-themed school lunch last week. It was sōmen (a very thin wheat flour noodle), representing the Milky Way, along with okra, which when cut looks like little stars. 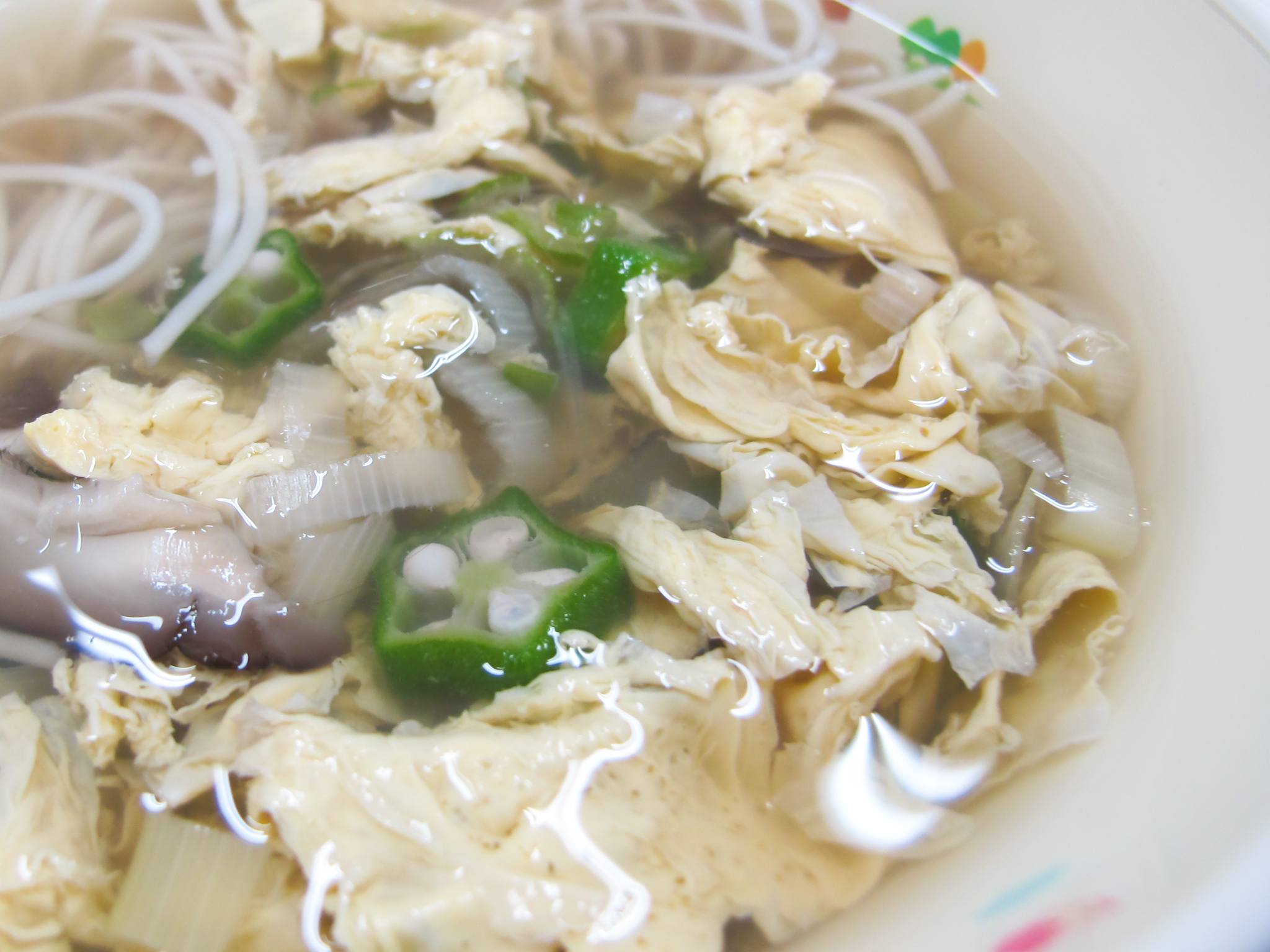 This weekend, many people were out and about enjoying Tanabata festivals in one of the first opportunities for the summer season to don yukata (summer kimono). I attended the Shonan Hiratsuka Tanabata Festival (湘南ひらつか七夕まつり) in Kanagawa Prefecture. It is one of the nation's largest Tanabata celebrations, along with Sendai's Tanabata Festival. The main attraction of large Tanabata festivals are the thousands of colorful streamer decorations, representing the threads of a weaving loom.

While dare I say that the decorations themselves at Hiratsuka were on the whole not as exquisite as some of the ones found in Sendai, this festival covered a huge area and hung en masse looked impressive and really contributed to the festive atmosphere. The festival was held over three days (July 6th-8th) and you could find all your festival favorites here: countless food stalls, music/dance performances, games for the kids, and lots of drinks and kakigori (shaved ice with flavored syrup). 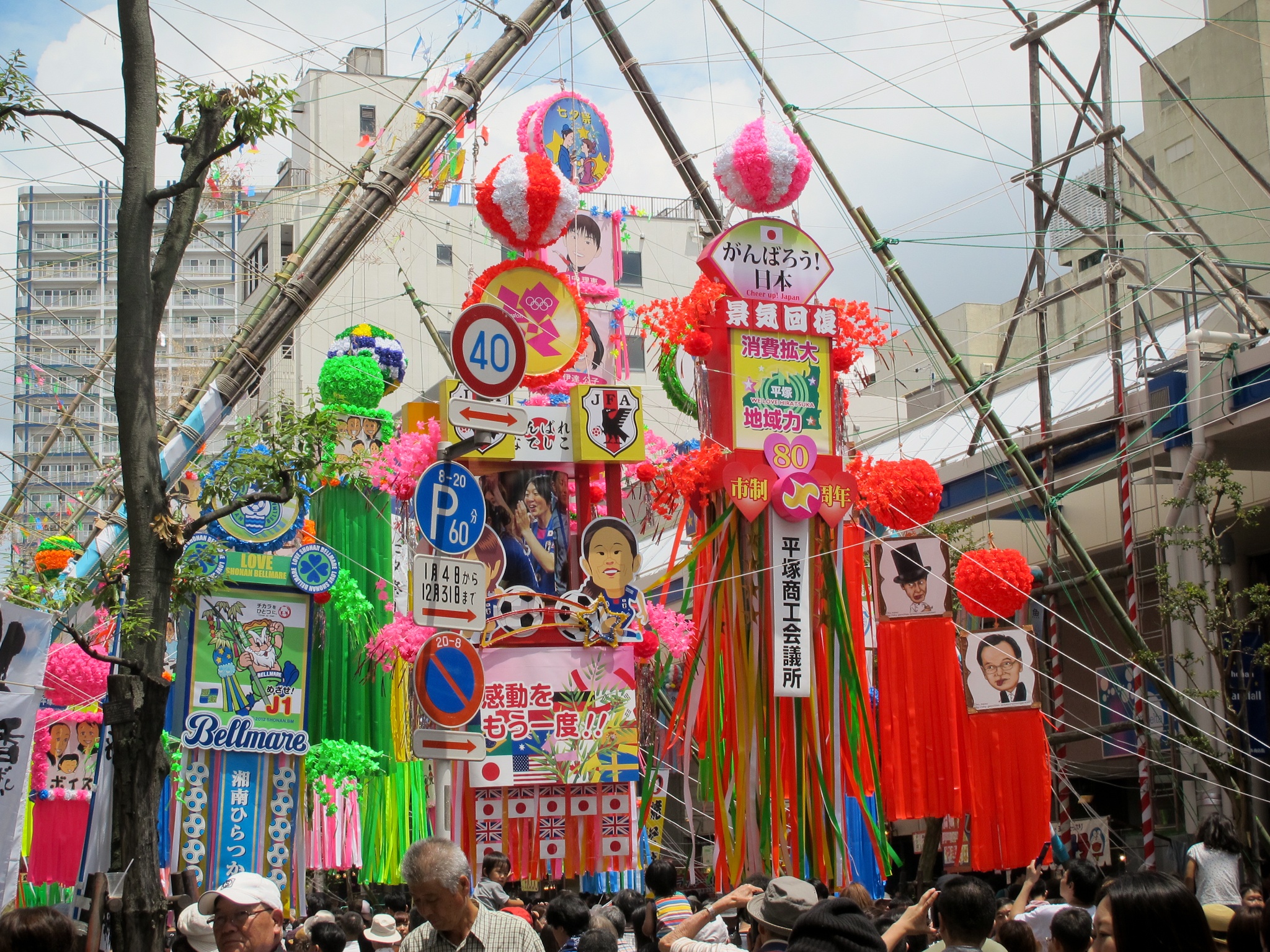 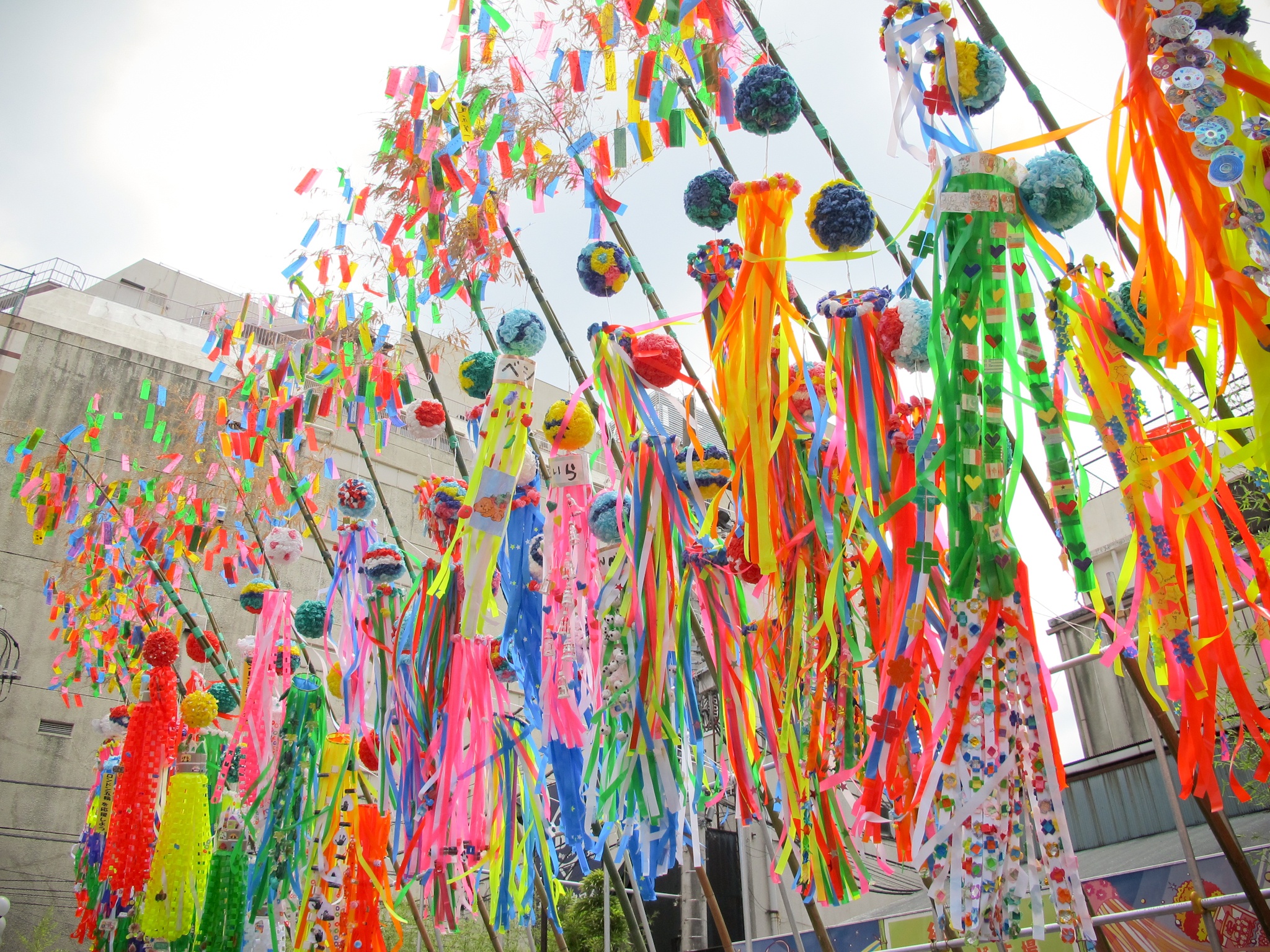 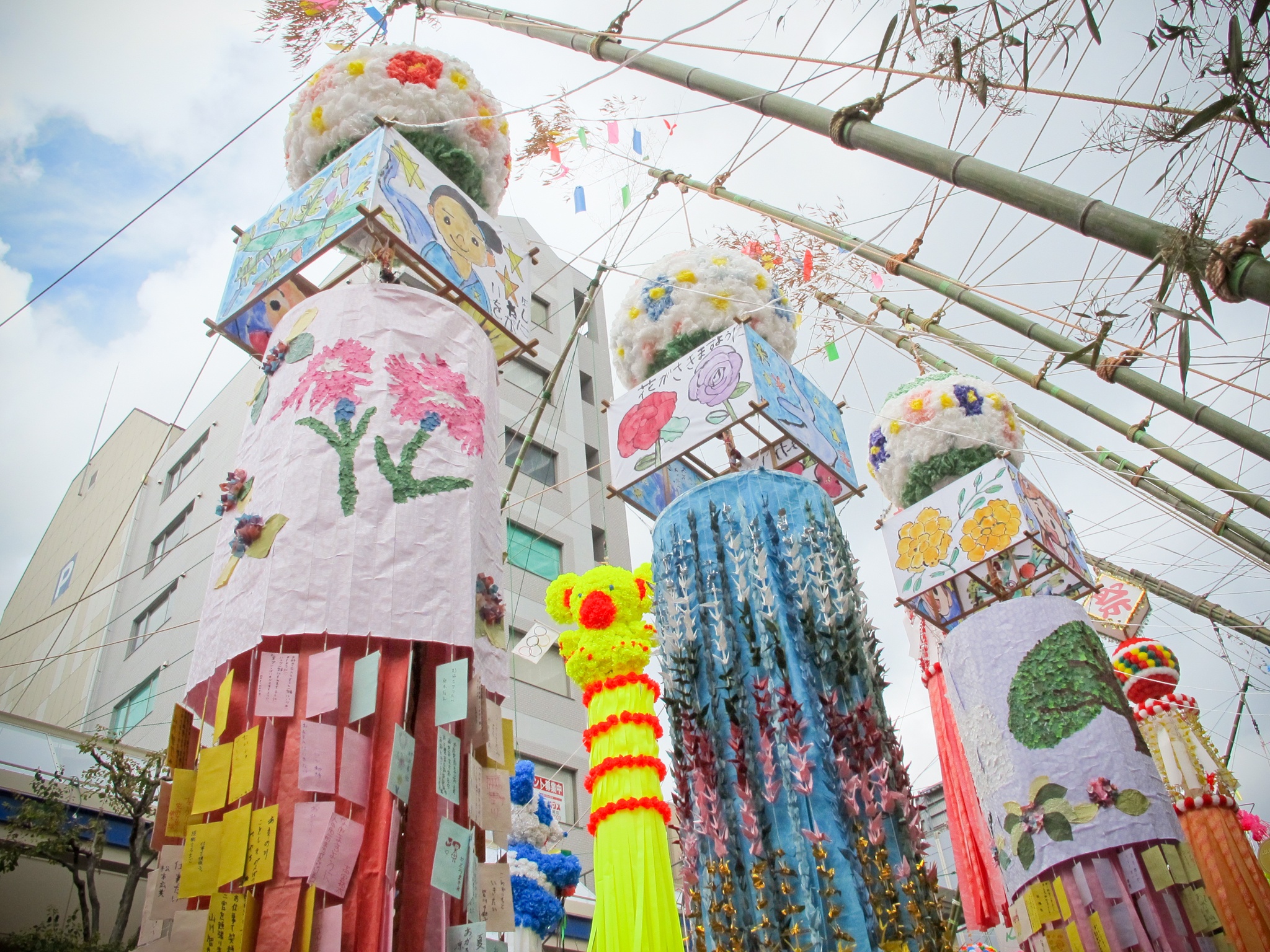 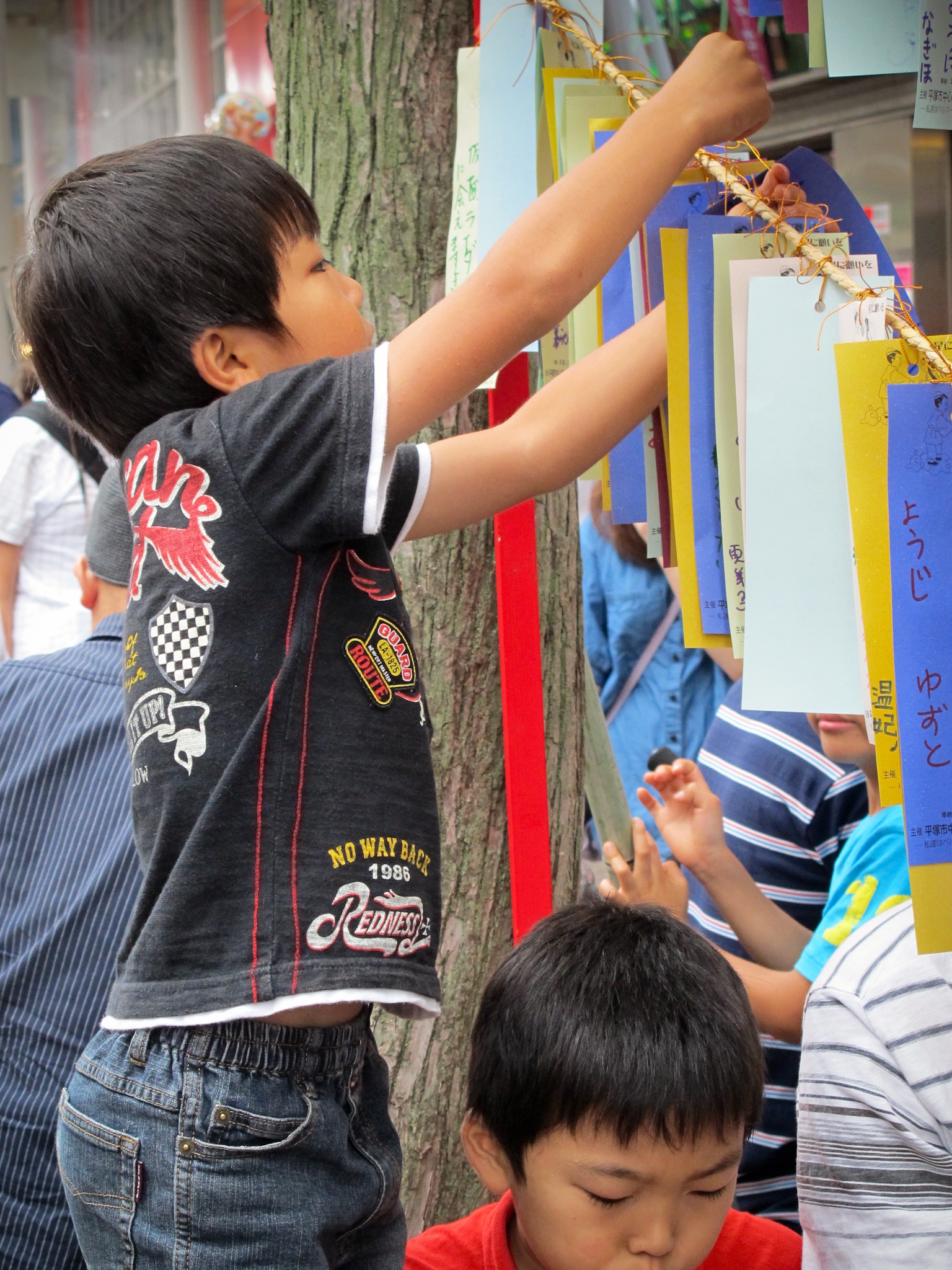 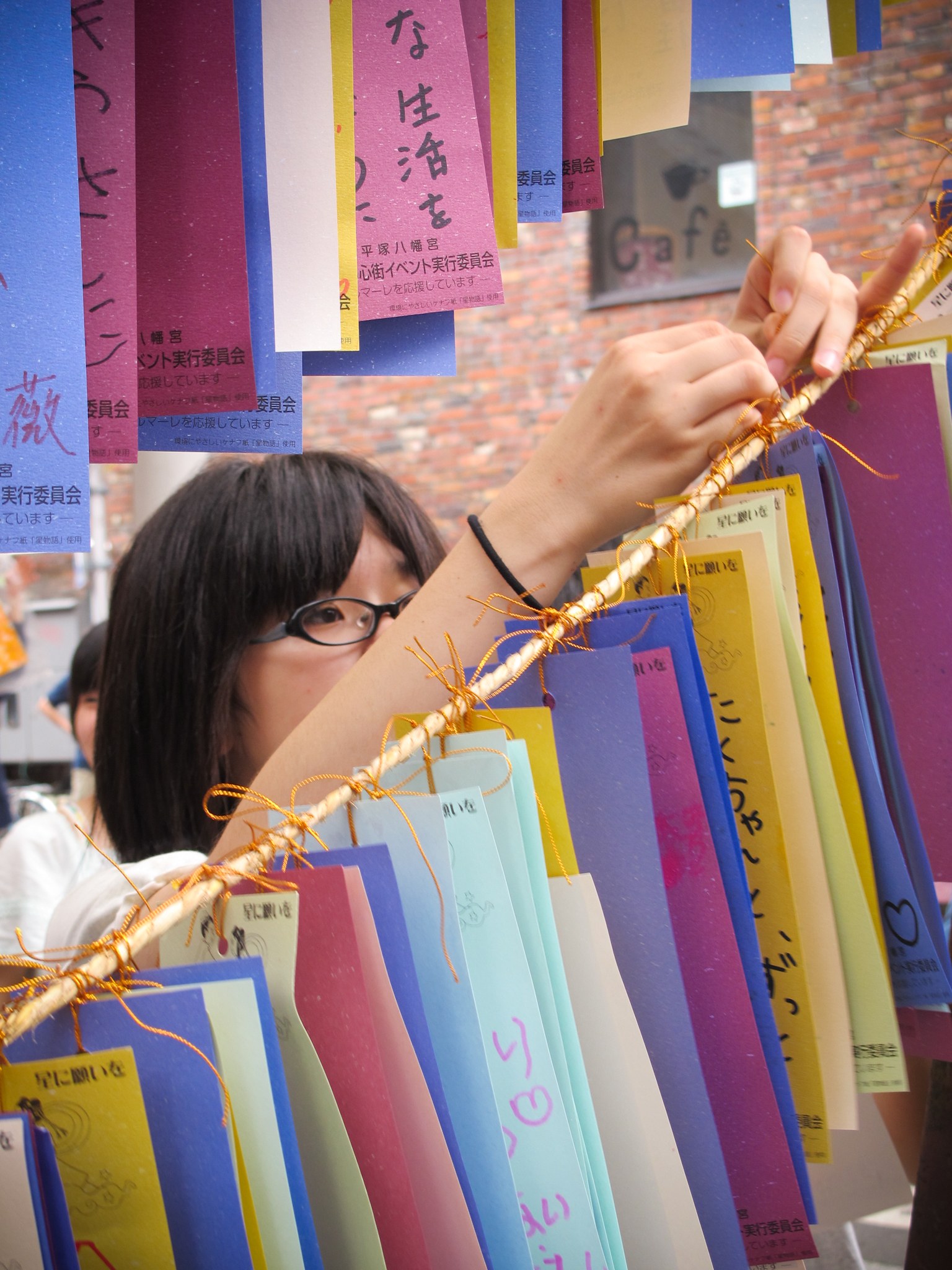 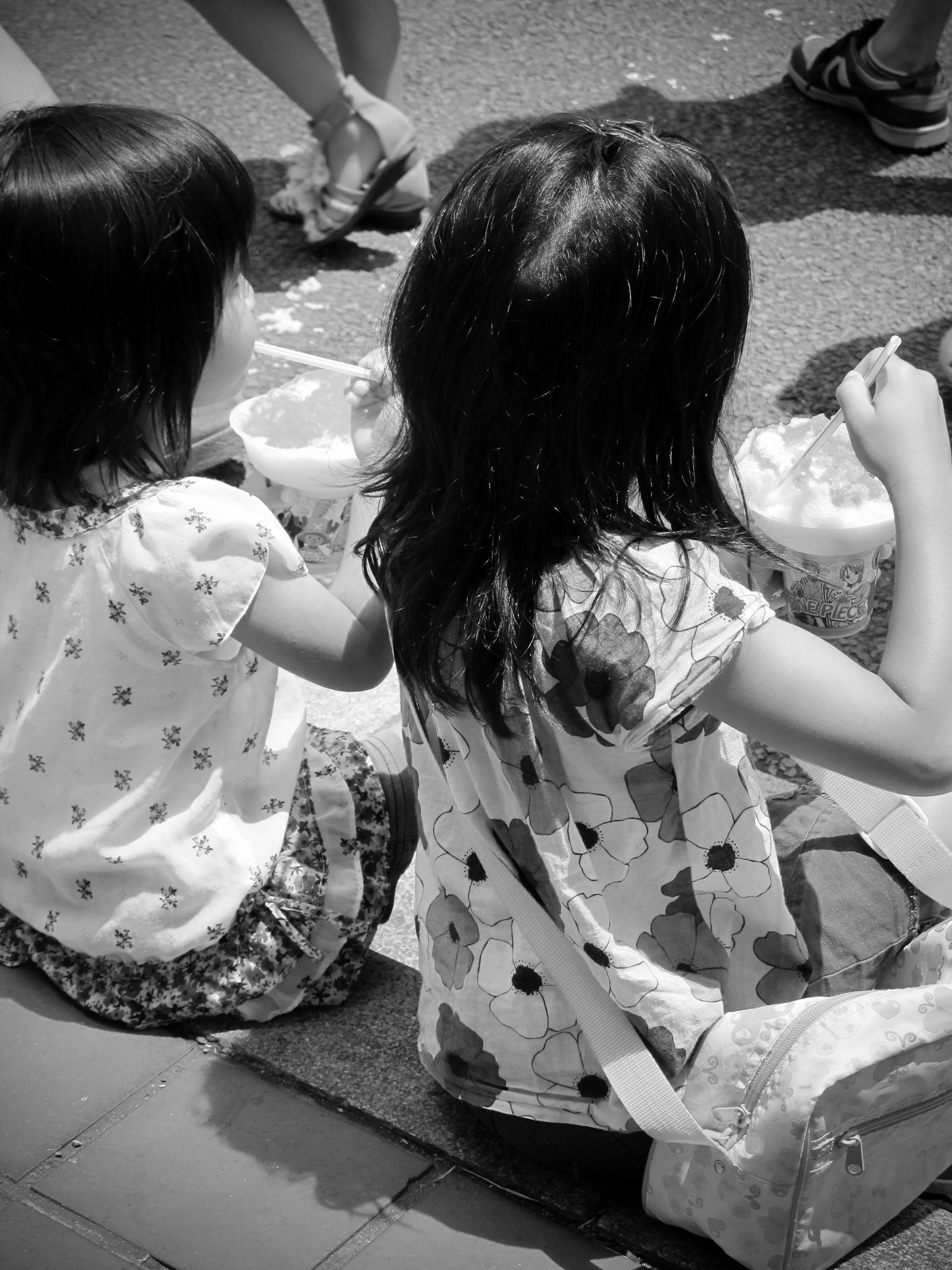 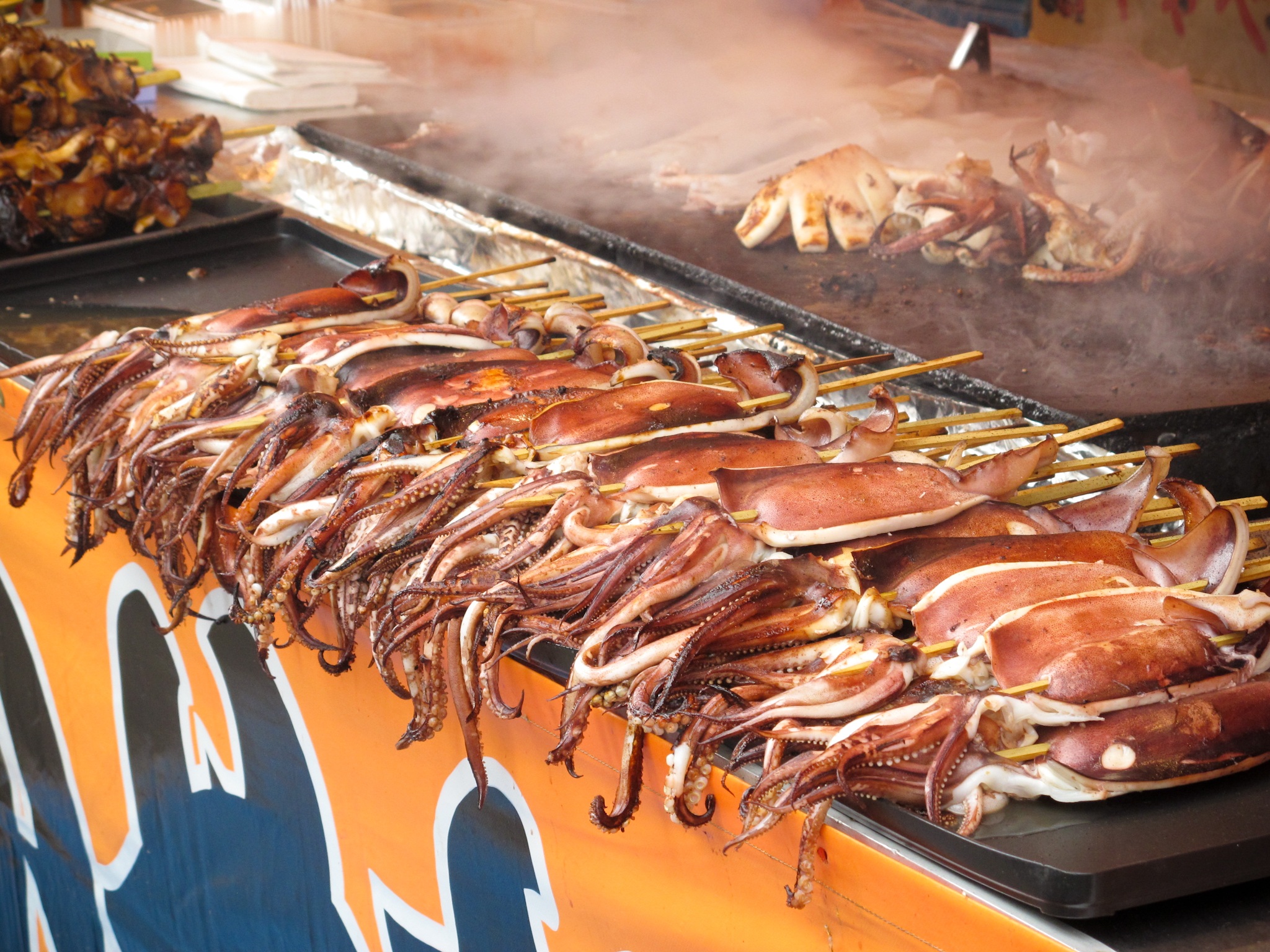 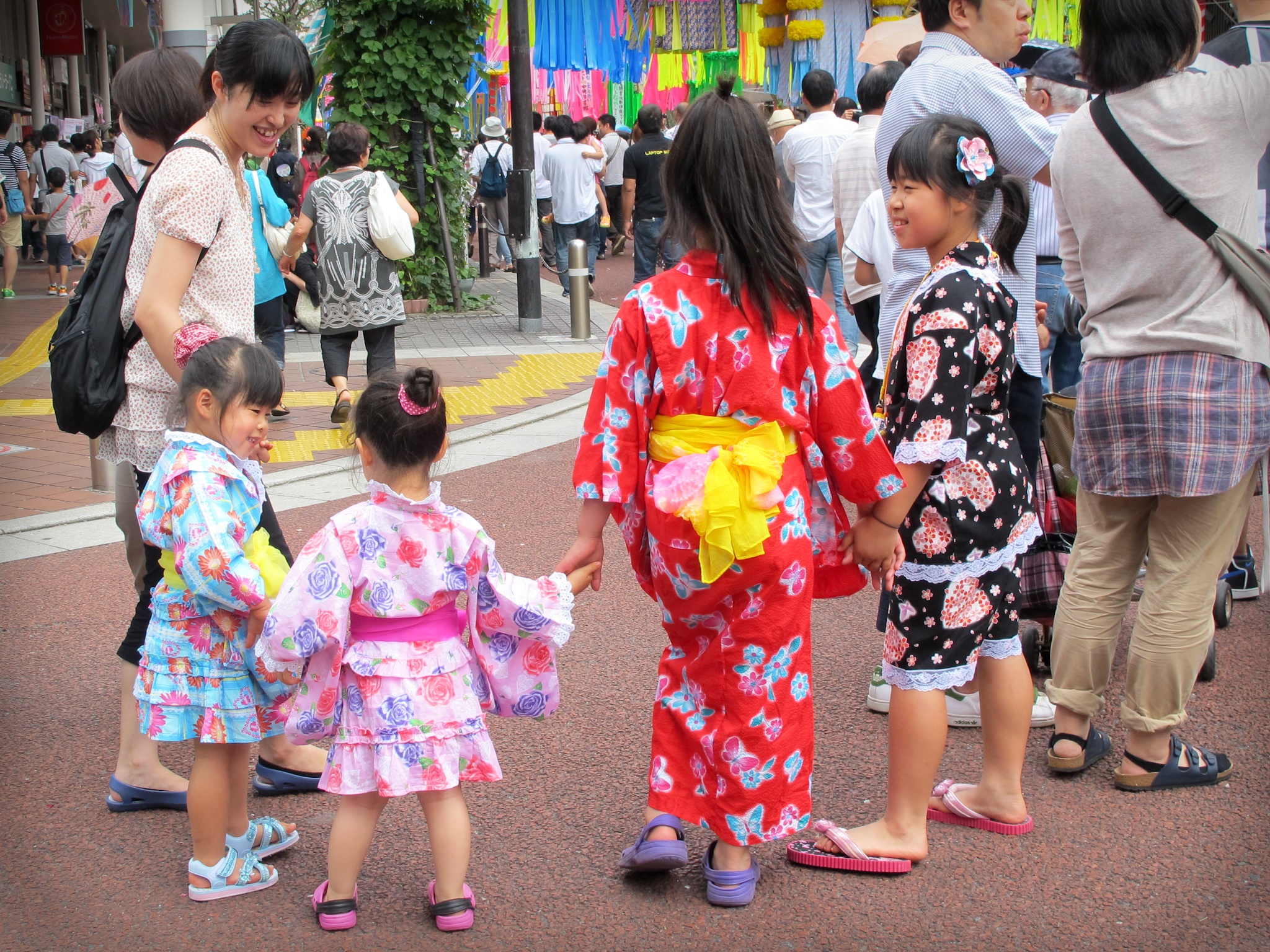 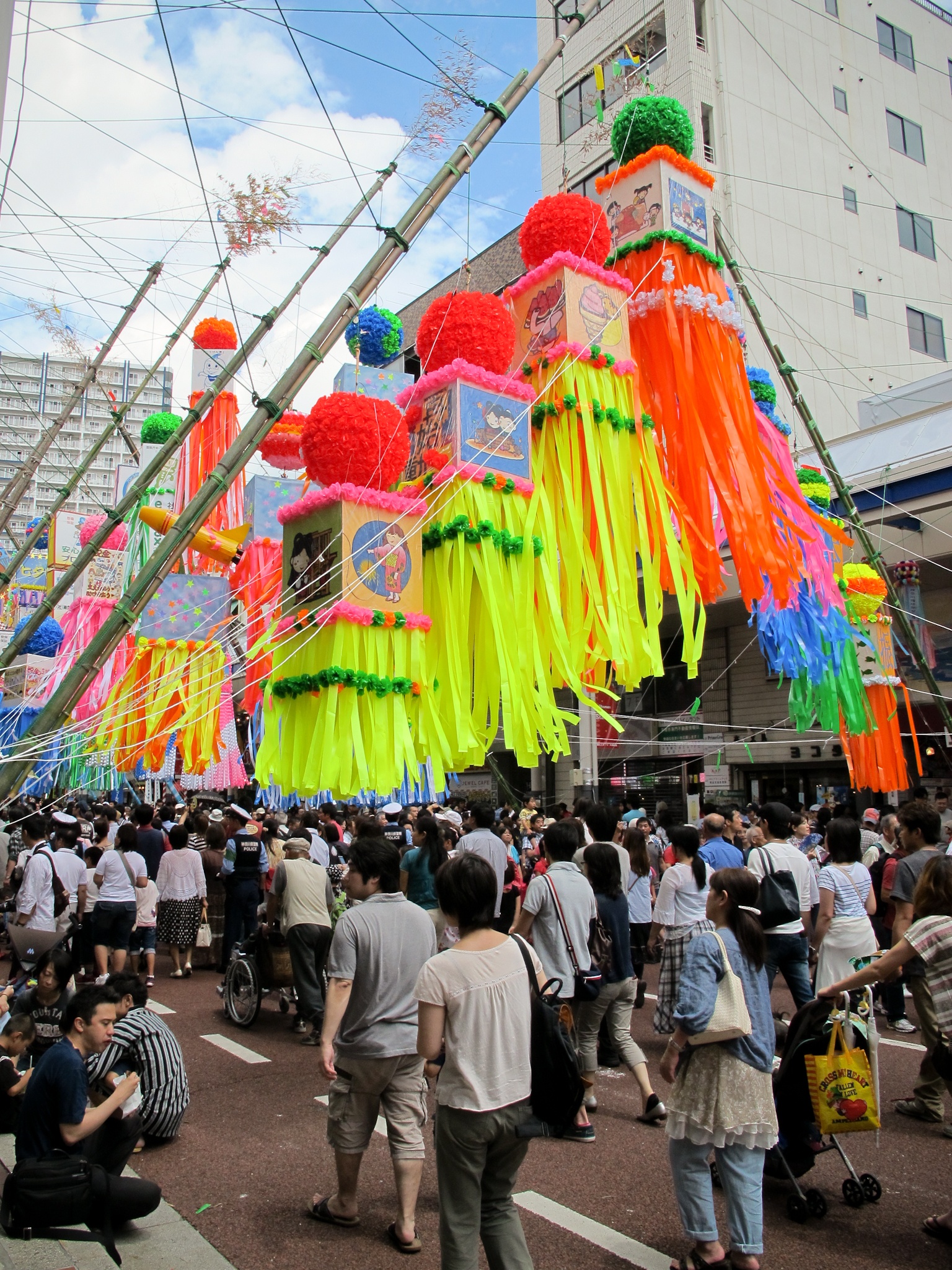 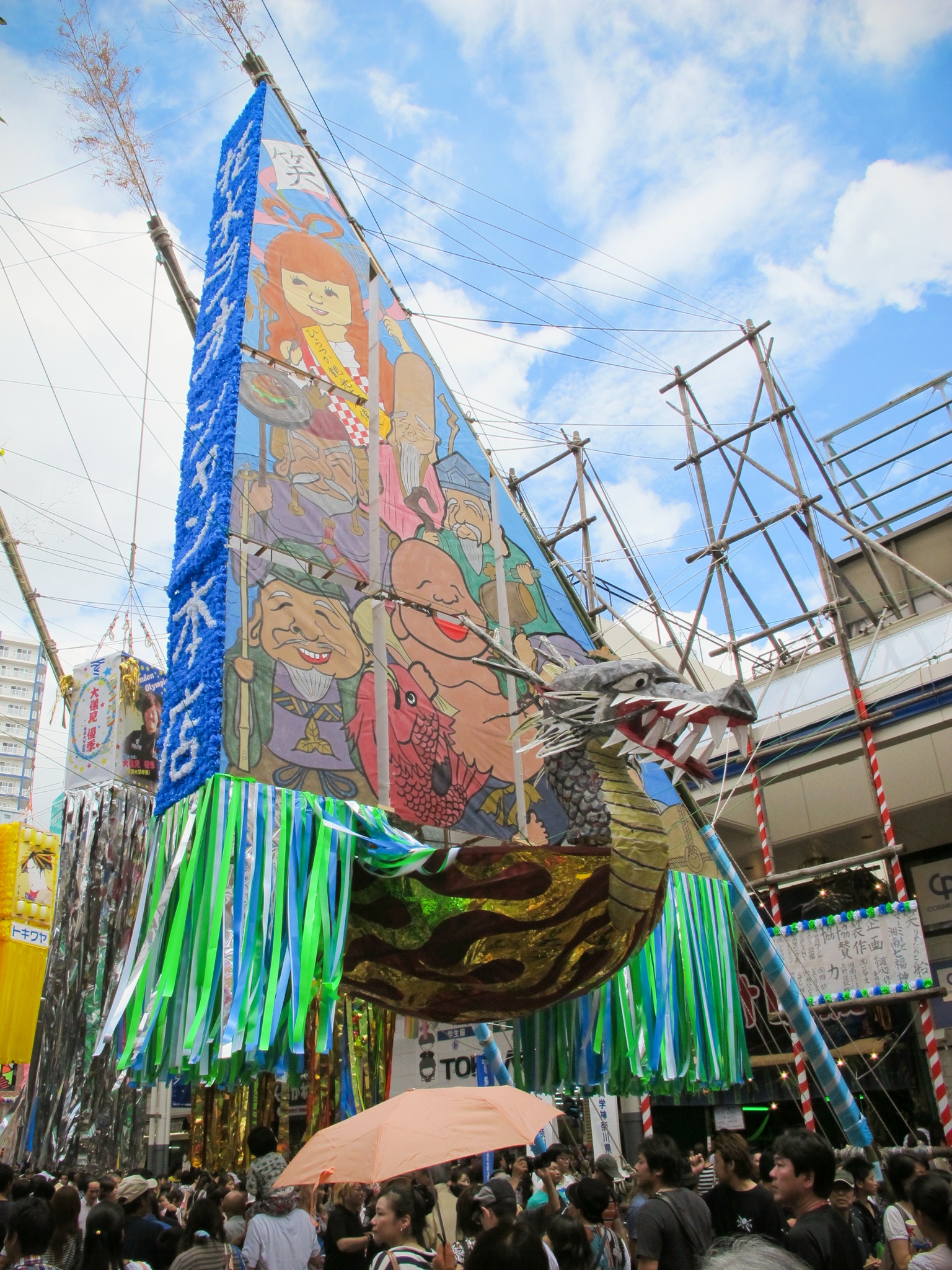 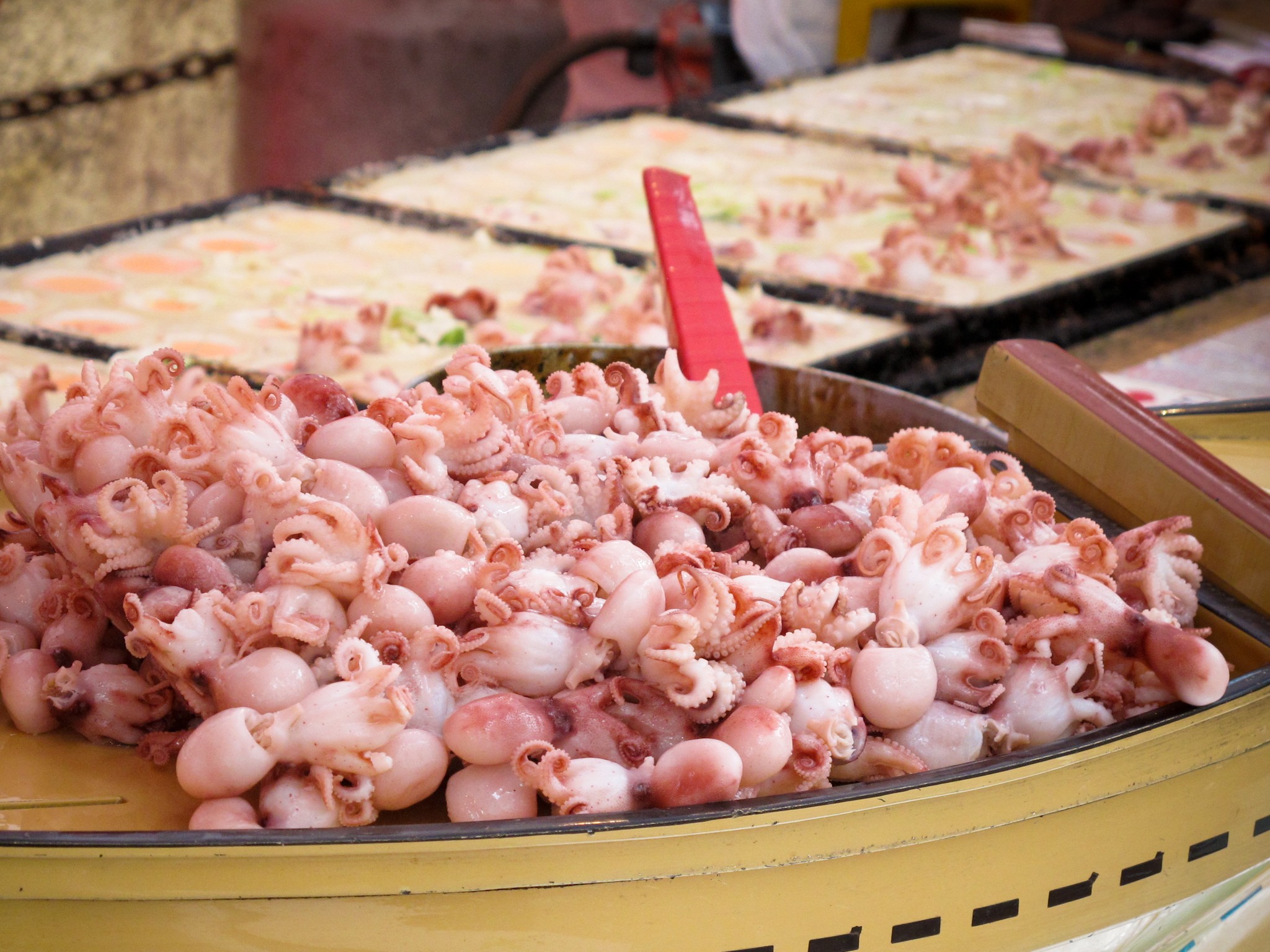 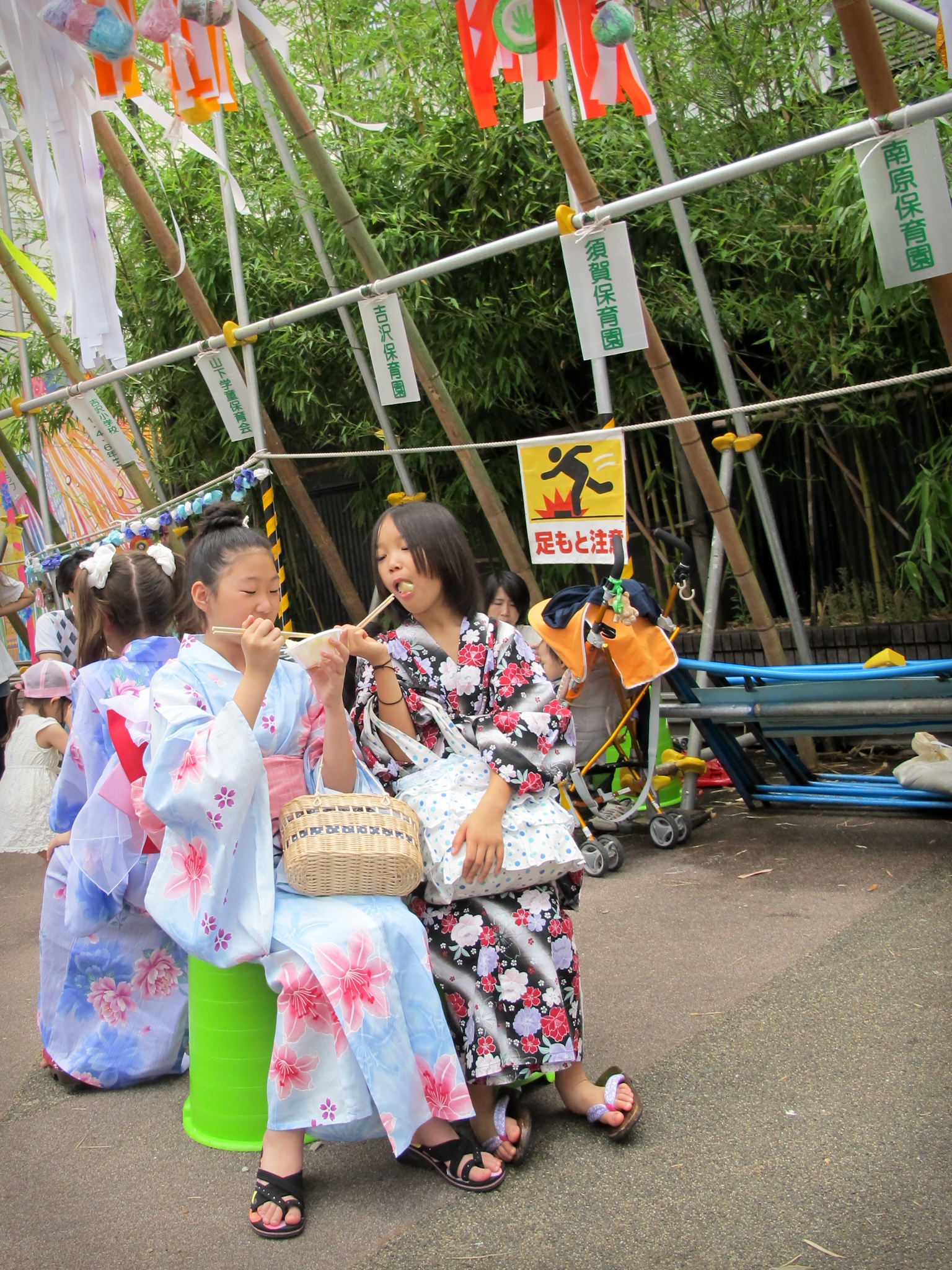 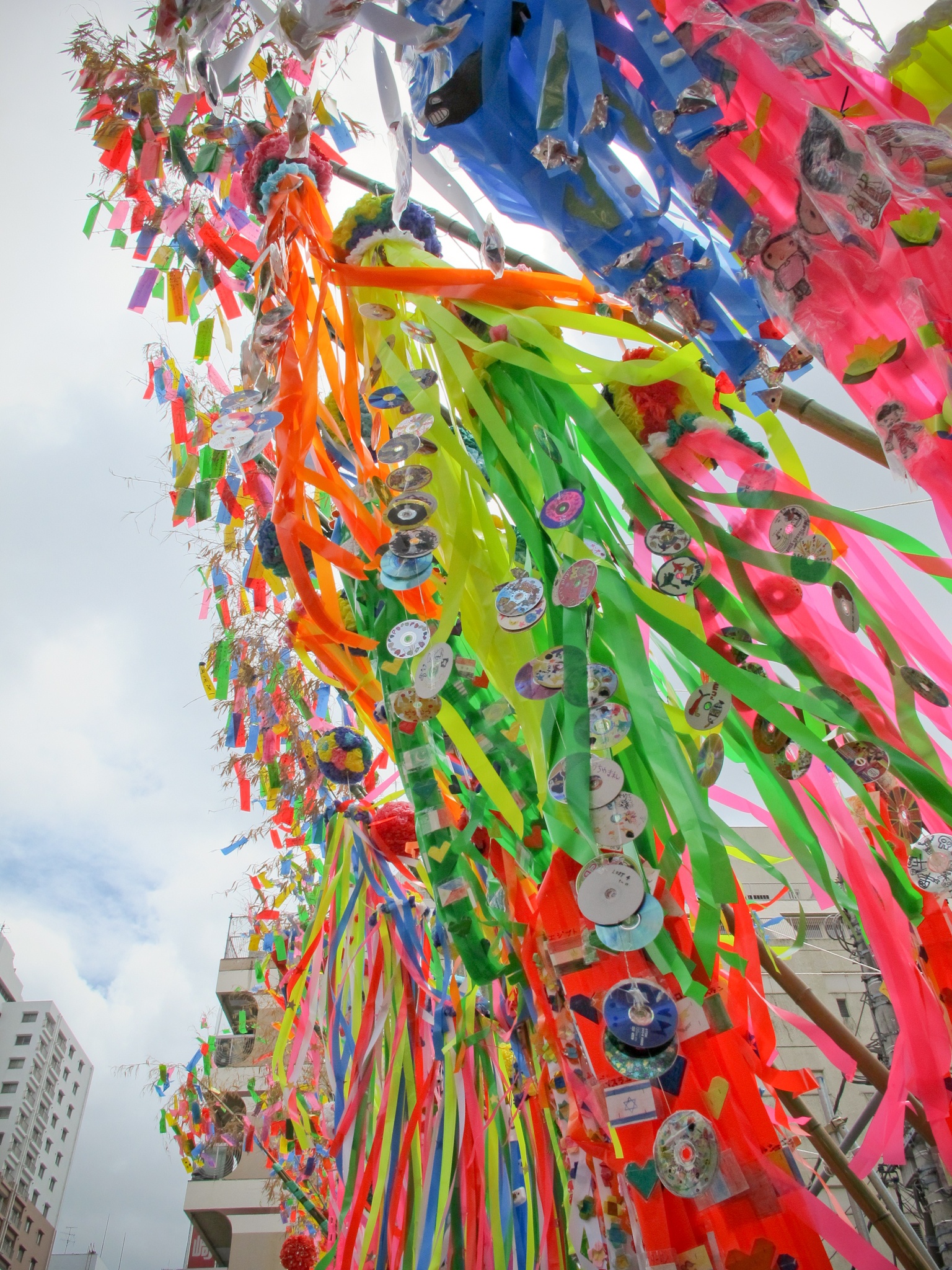 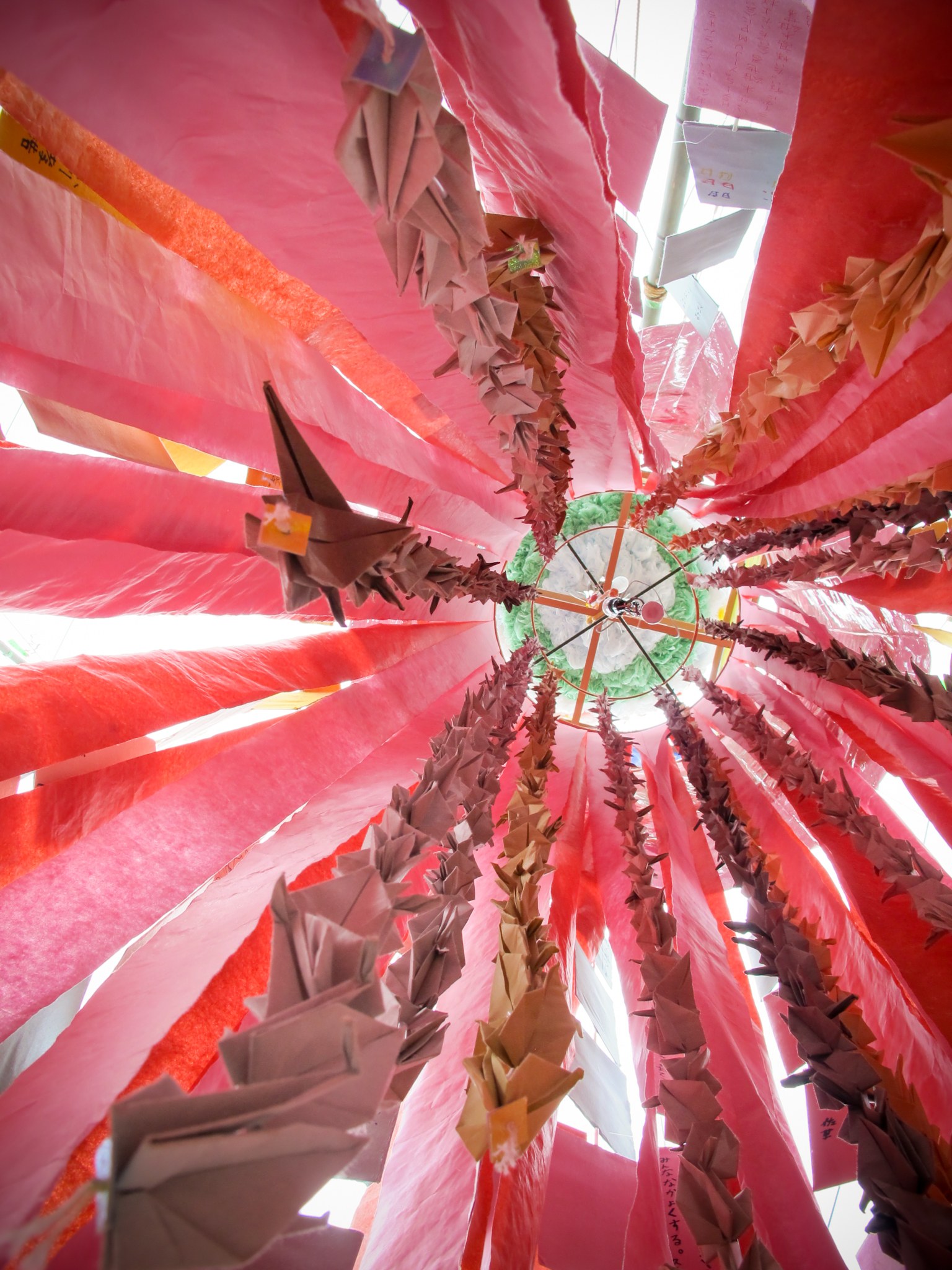 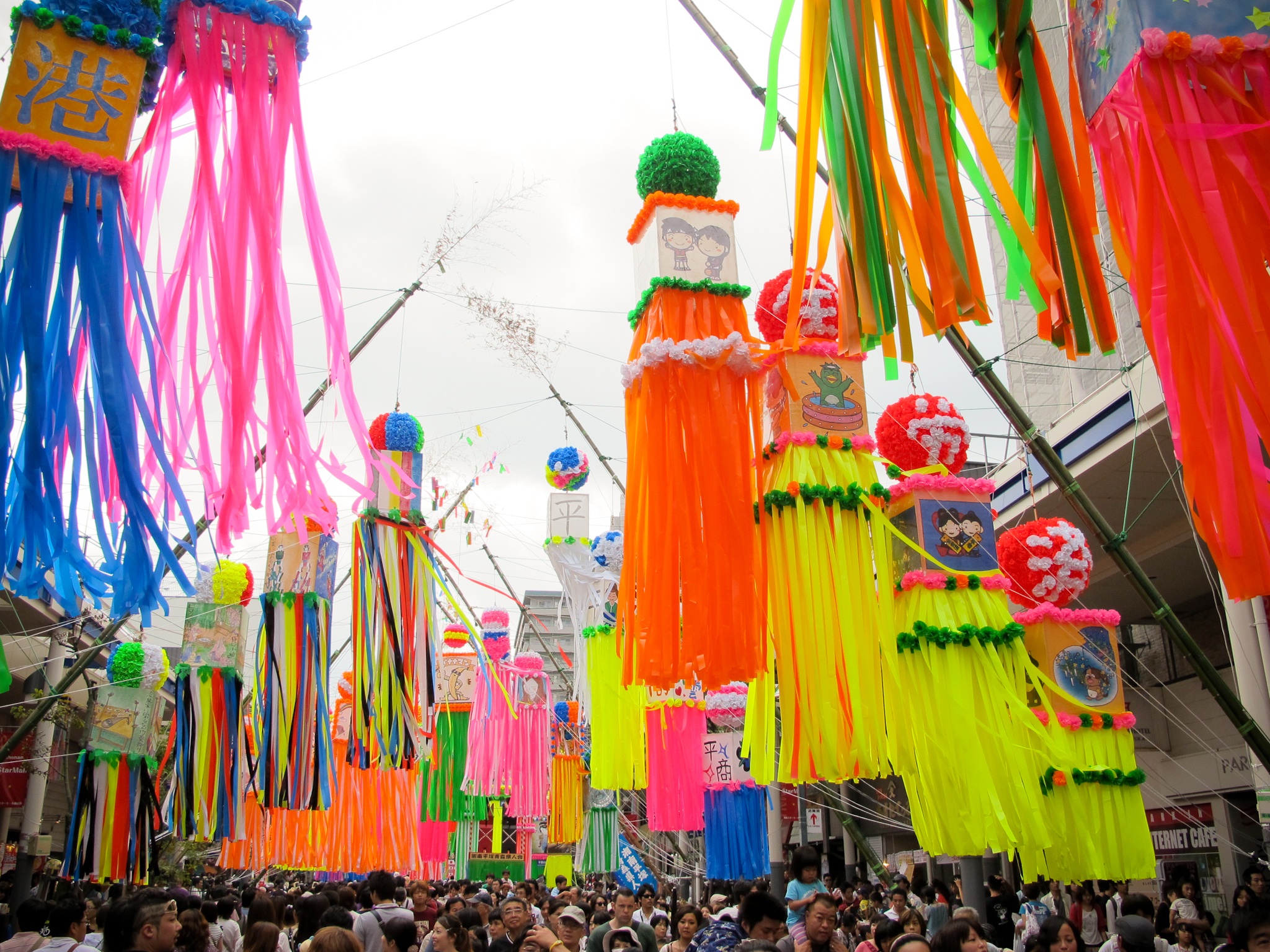 While the day started off with some drizzle, by afternoon the skies had cleared and the sun gave us a taste of the hot and humid summer days to come. After a late lunch (since we had been snacking at the stalls since late morning), my friend and I decided to escape the heat and the insane crowds for a while and head into a bar. We ducked into a random side street and tried to find a place open. Many establishments had closed entry to their premises and instead had set up shop with tap beer out on the street to take advantage of the increased traffic. We walked a little further down where there was a small table outside and drinks being sold. We looked up to see a few people sitting by an open window looking out onto the street below with drinks in hand. Despite the stairway making it look like it wasn't too open – random boxes lined the stairwell along with an electrical cord that was strewn right across the walkway like some kind of OH&S hazard – we asked the lady if we could go up, and with a nod she directed us to the third floor.

It was a very small cozy place. We ordered a drink and hit if off with the bar owners, a mother and son, right away. We chatted and chatted and soon after the daughter, the young woman downstairs, joined us too. They even took our picture and made a board with our names on it so they could print off the photo and display it behind the bar!

After a while enjoying our drinks and complimentary nuts and M&Ms, a cake appeared. There was a small gathering at the other end of the bar – it was someone's birthday. We, as the only others there (could have been some kind of private function, we're not sure), were soon invited to join the festivities. The birthday boy, Ken, who was turning 29, had been given a guitar as a surprise gift from his friends. His friends had signed the guitar with permanent marker. One of the friends came over and asked if we would sign it. “Really?” “Yes, please” he said. So we picked up the pen and each wrote a short message. He said “There's still a lot of space on the back, please write more.” We had written our initial messages in English so then my friend wrote “Happy Birthday” in Spanish and then I wrote it in Japanese. Our handwritten messages will forever be on this guy's guitar to remind him “Oh, remember that Tanabata festival day when those random foreigners came to the bar and crashed my party.” 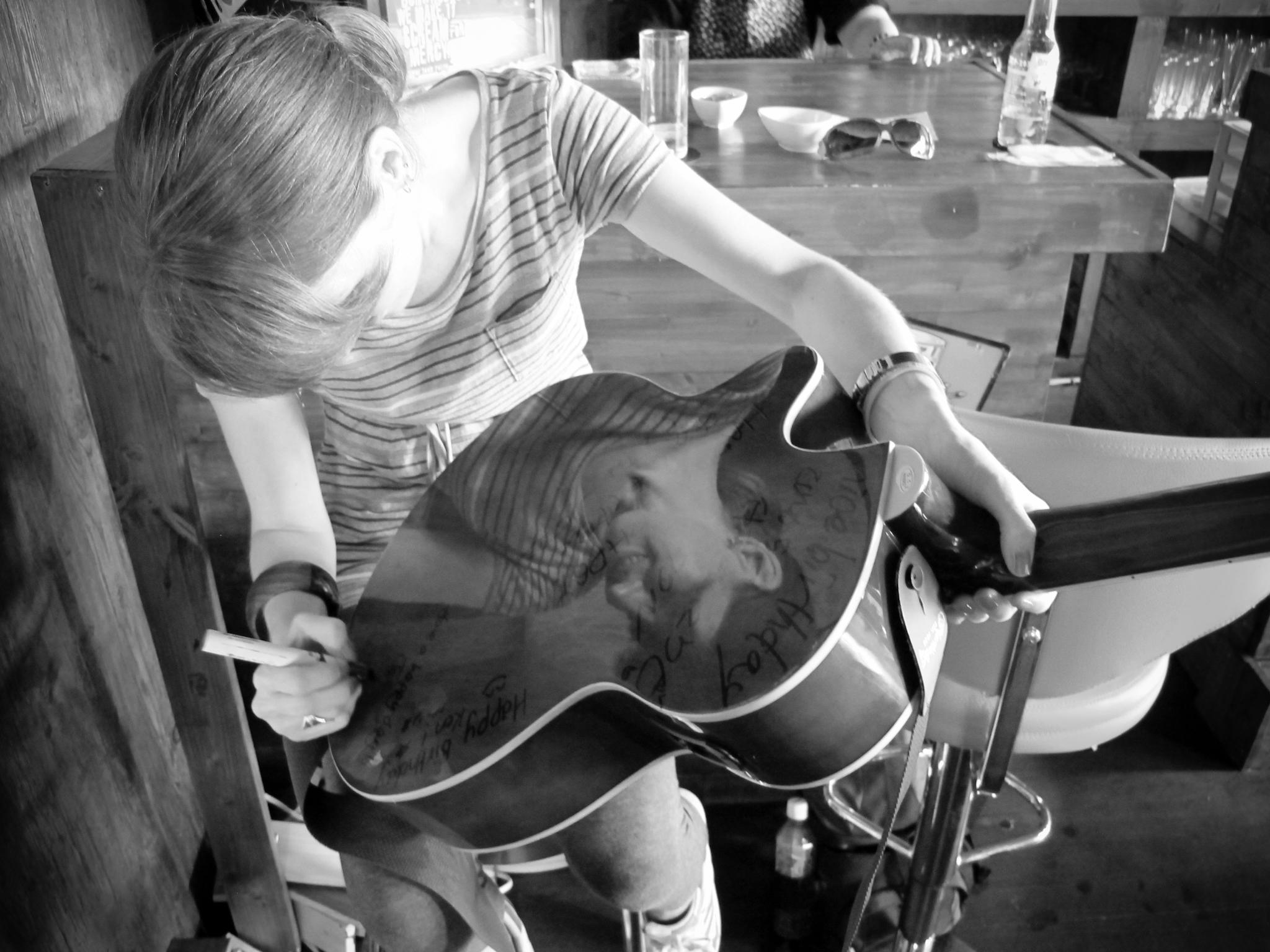 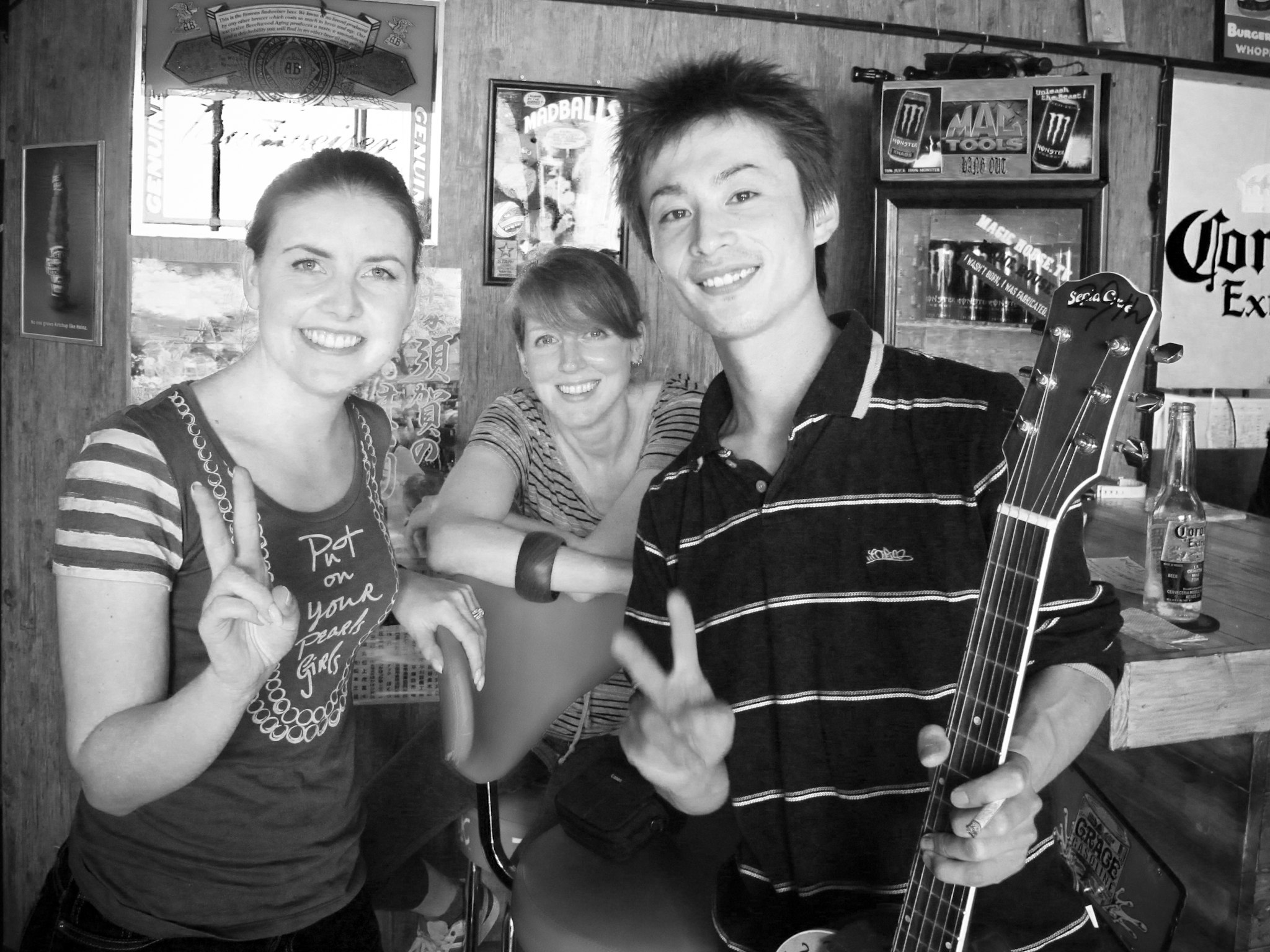 The birthday boy with his new guitar.

They sang some tunes with the guitar and we were soon brought over some fresh drinks, we were told courtesy of someone at the party, and a slice of the birthday cake too. We thanked them and they continued enjoying the festivities with arm wrestles and playing janken (rock, paper, scissors) to decide who got the next shot.

It was late afternoon and we decided we'd better start making our way back to Tokyo. We went to pay for our earlier round of drinks to be told by the bartender that the party goers had covered all our bill. It was thank yous, high fives and hearty handshakes all round as we said our goodbyes.

Can't guarantee anyone will pay for your drinks, but if you're looking for a cool, family-run place to while away a few hours, the “Hang Out” in Hiratsuka is your place.

If you'll be in Japan in early August and are interested in experiencing a Tanabata festival, you can still catch one of the country's biggest and definitely most well-known Tanabata celebrations held in Sendai from August 6th-8th.

Happy Tanabata everyone and may your wish upon a star come true!

Opening hours: 20:00-06:00 (except on festival days or special events when they open earlier).

The Hang Our Bar is within a few minutes walk of Hiratsuka Station. Take the West Exit, cross the road and then head left. You'll pass a Book Off and once you reach the 7-11 convenience store, turn right down the side street just before it. The Hang Out Bar is perhaps 20 meters or so down on the right-hand side. 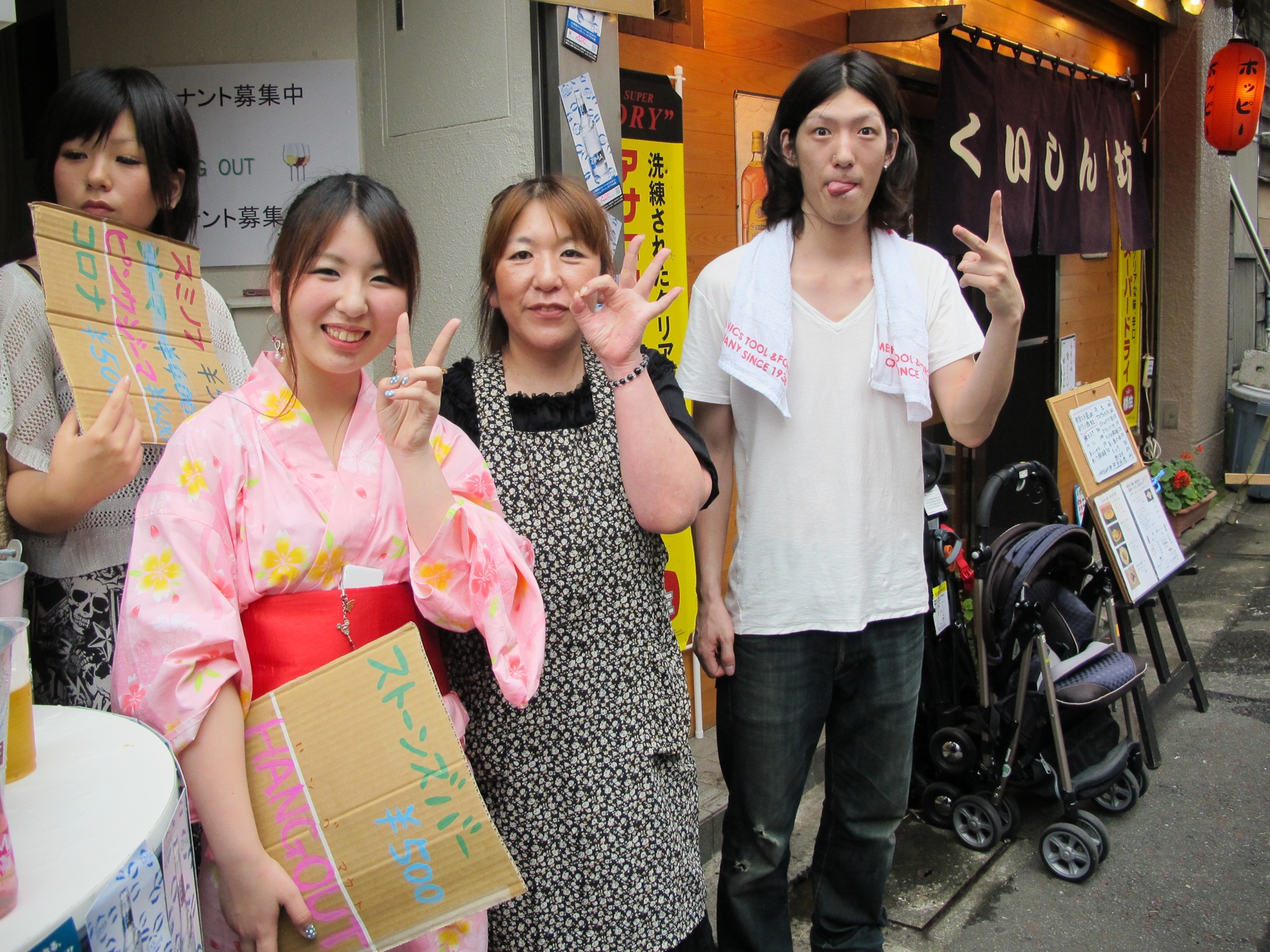 Look out for this shop front and these smiling faces. Entry is via the stairs behind them.

nice story! when I was kid, my parent brought back small bamboo tree from somehere, and we(me & my sister) enjoyed hanging wishing strip, and decorated with fancy ornaments. But, problem was I am so indecisive, and had a lot of wishes. So, my sister always picked one from my wishing lists for me, w! I'm grown-up man now, I have to pick one for myself, w! Anyway, thank you for reminding me good japanese custom. I've been stressed out these days. this story awakes memories of good old days and positive thinkings. good day!

Thanks so much for taking the time to read and comment on my post! Sounds like tanzaku was a great family tradition at your house. I hope you had a great Tanabata in 2012 and that your wish has/will come true! Hope you're having a great day and enjoying the small adventures wherever you are :) https://notesofnomads.com/small-adventures/

great post, capturing a great day - so happy to have shared it with you!

Thanks Jo! Thanks so much for coming out and spending the day with me! It wouldn't have been the same without you! x

The pictures are amazing and the love story was very touching, but I think the bar story got me the most. I love tbeing able to look into another culture and thanks to you rblog I can froma more personal point of view!

Thank you! I'm glad to be able to share our experiences and even more so that there are people like you that enjoy reading about them. I love to collate practical information for readers who are interested in visiting the same places, but it is also my hope to try to capture the atmosphere and those personal accounts that defined the experience. It is often those that we remember most! Thanks so much for taking the time to read and comment on so many of our posts. It is much appreciated! Hope you're having a great end to the week! :)

A heartwarming story that made me forget the cold Melbourne weather. Thanks Jess! Did you feel like a celebrity when they asked you to sign the guitar?

Thank you Amy! I do love the Tanabata story. Whenever we do leave Japan, I will secretly miss the interest people have in you for the mere fact you are not Japanese ;)