I was determined not to let the horse riding experience from the day before overwhelm me. I had to take control of this horse. And it would need to start with me. Yesterday he had made me nervous and he felt that, I’m sure of it. Today I had to be stronger and, like how I approach most things that scare me, focus on achieving this journey one step at a time.

I went straight up to Go Your Own Way to tell him how things were going to work today. Don’t get me wrong, I had tried talking to him many a time, encouraging him and praising him when he did well. But often it was more like “Good boy, you can do it [in my mind: Thank God, just keep doing this so I don’t fall].”

My conversation with my horse went something like this: “OK, Go Your Own Way, I know you probably don’t want to do this and I’m probably one of your least favorite people right now for making you carry me, but I’m on your side, really. I’ll do whatever I can to make this easier for you, I just need you to help me out a little and listen to instruction for the sake of both of us. We’re in this together.”

I’d made some changes on the instruction front too. I enlisted the help of one of our French tour companions who had been far more successful in steering. It turns out that I was doing it all the wrong way. Instead of pulling the reins towards where I wanted the horse to go, I should have been opening the reins. So if I want to go left, I should leave the right rein taut and let the left one go slack. “The horse will turn its head towards this open space, and move forward in the direction it can see.” I’d probably confused the hell out of it yesterday.

As we started our journey, I began putting this new approach into practice and, sure enough, Go Your Own Way responded. “See, we can do this,” I said encouragingly as we got faster and faster.

Today we were headed back to the first night’s camp by the river, only we weren’t taking the same mountain pass, but the long way around the Eight Lakes. Riding through the steppes, we had finally hit our stride. Go You Own Way and I could finally communicate.

Some parts were too treacherous to descend on the horse, so we got off and led then down by foot. The scenery was amazing and a few hours in, Hai got the permission he had long been awaiting, to be able to take photos from the horse. Unfortunately too late for some of the most stunning places, but everywhere was lovely nonetheless. We were told that we couldn’t take photos while riding as the shutter can scare the horses and send them running for the hills. The second reason is probably because they don’t want you taking your hands off the reins. Now on day three, they were confident we could ride. It’s not as easy as it sounds to simply take a photo one handed from a moving horse, while all your subjects are moving too. But here are some of the shots Hai took from that afternoon. 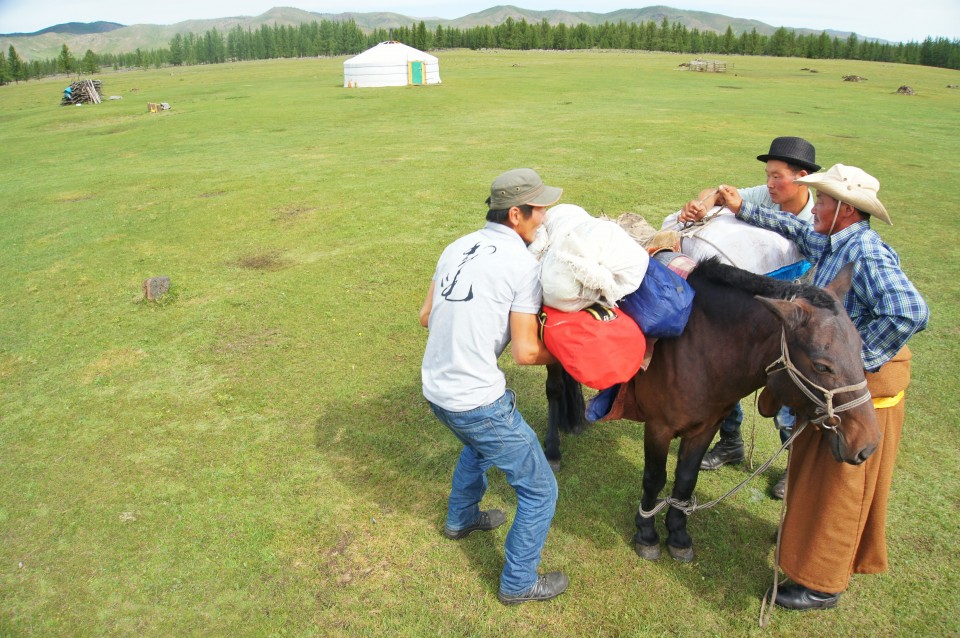 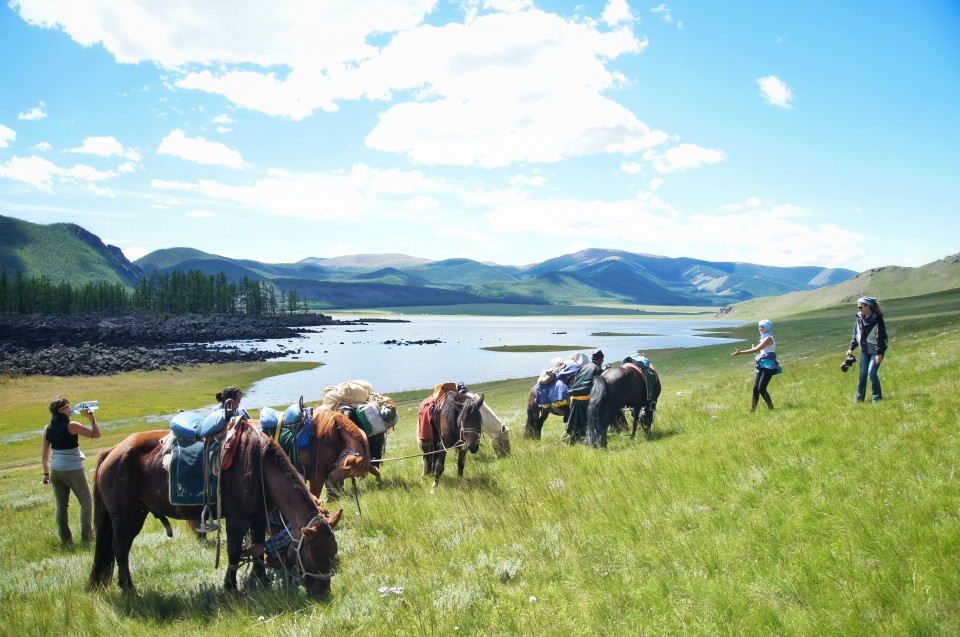 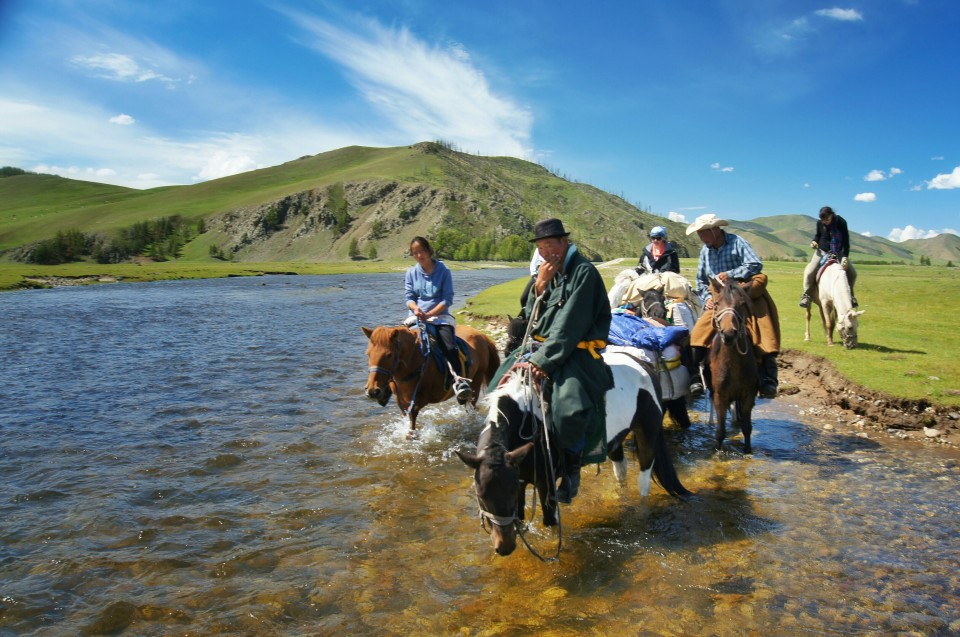 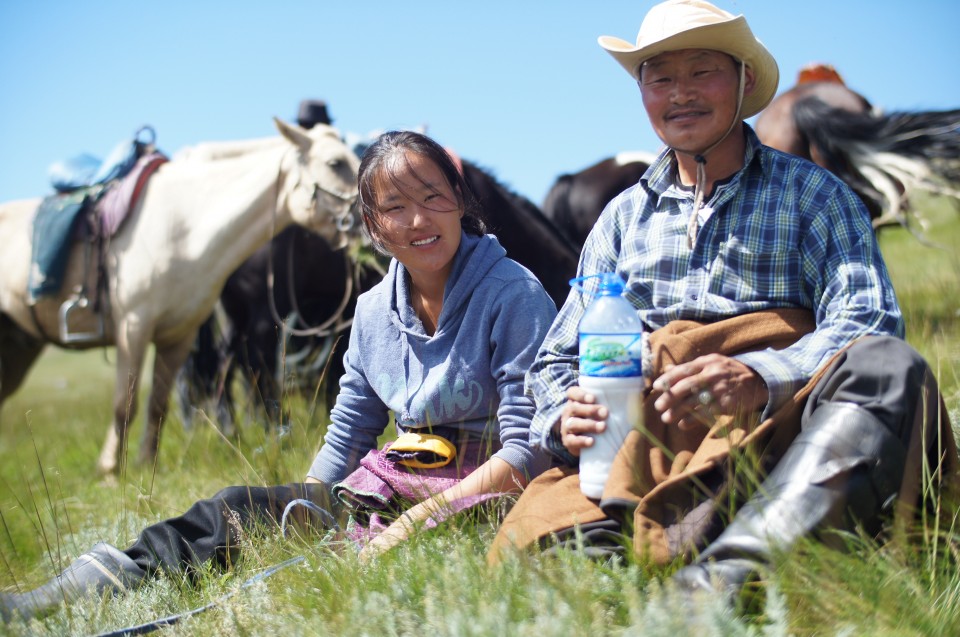 Lunch break – our guide (left) made an awesome spaghetti in the middle of nowhere. 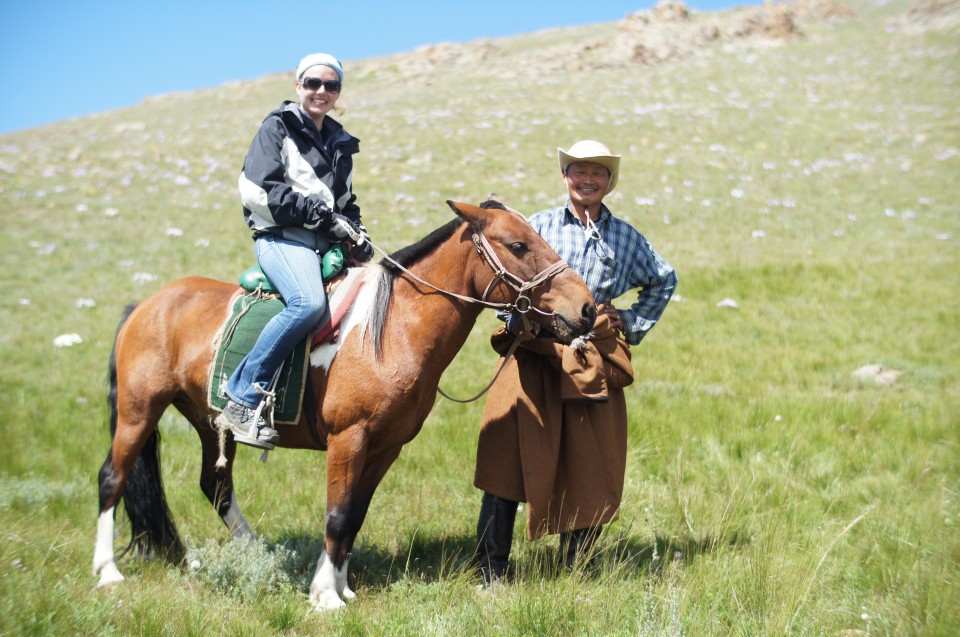 Despite his stubbornness, Go Your Own Way was a beautiful horse – so shiny and strong, and with mixed coloring that made him unique. 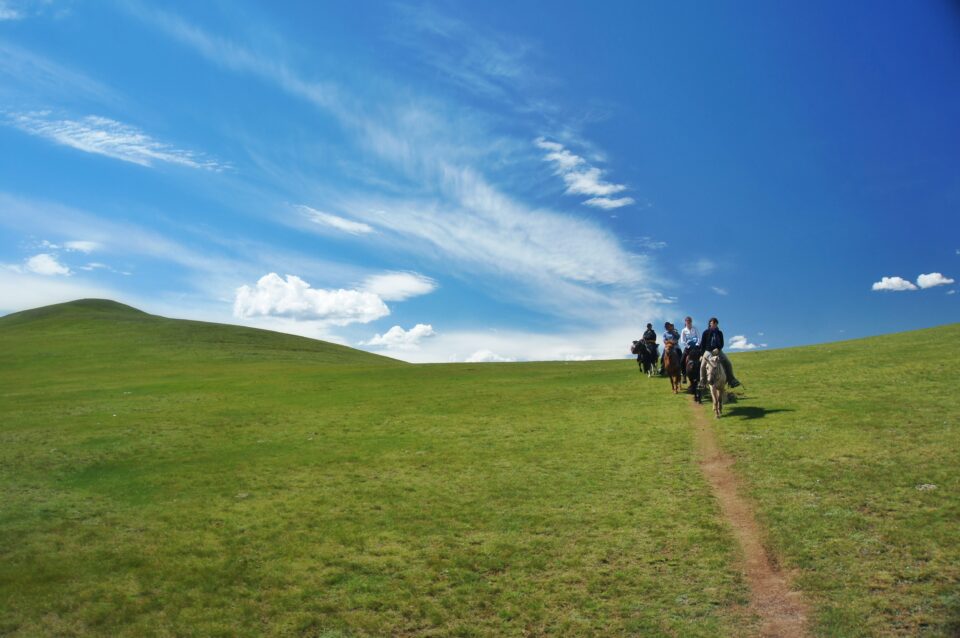 It was a long day's riding – 7 hours to be exact – but it was the best day yet. During the final stretch we were galloping home. Go Your Own Way had this thing about starting out at the front of the pack, falling back, and just pacing everyone else from behind. He was tired but digging deep, so I let him go at his own pace. From carnival pony ride to solo galloper through the Mongolian countryside in three days, I was proud of myself.

Getting off the horse, my knees were like jelly from the intense workout. If you’ve never ridden a horse before, you might think the horse is doing all the exercise. Believe me, you’ll feel like you’ve done several back-to-back sessions at the gym.

Back at the river, we were staying in a ger, rather than a tent, this time round. This wasn’t a tourist camp but a local family’s private accommodation. The daughter and her family had vacated their ger for the evening for us. It was a stunning set-up and definitely felt like a home – with photos, mirrors and a small altar for prayer. Who would have thought basically a tent could look as amazing as this! 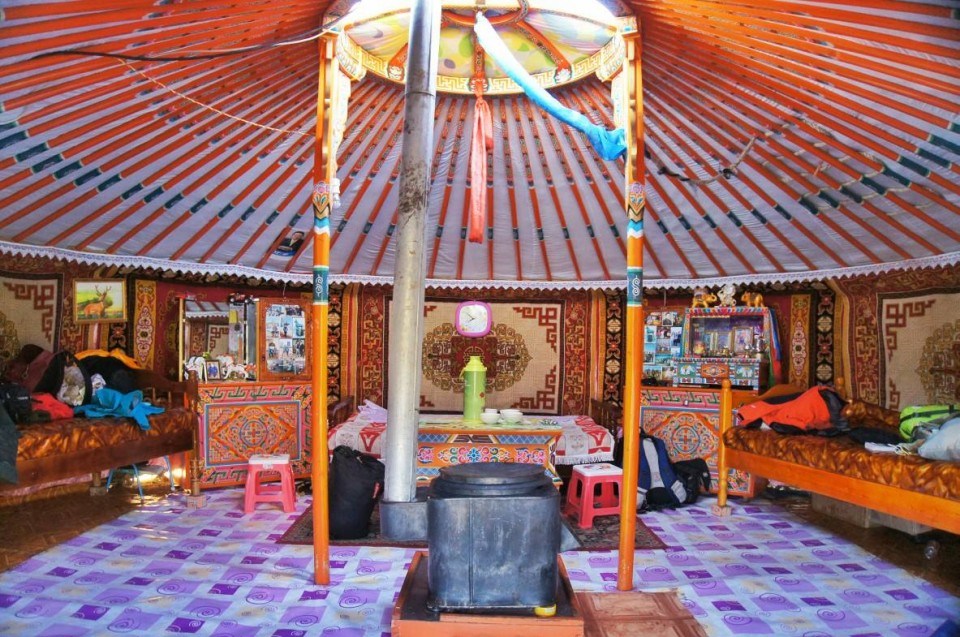 That night, everyone came into our ger. We drank beer in the same tradition as the vodka by the fire, each drinking one cup in a clockwise direction, in a cycle that just keep going round and round. I think it was after the third glass that I felt it was OK to politely decline the next round. I'm not really a beer drinker in general and out here drinking meant lots of dashes out to the toilet, i.e. forest, during the night.

As only one person was drinking at a time, as is Mongolian custom, they asked those not drinking to each draw a picture in a notebook for them. I drew my “Death by Yak” story. The horned yak was there of course, and the two tents, and me with a shocked expression trying to tip-toe around them. One of the horse guides said, “Oh, the black one? I want to kill that yak! It ate one of my saddles!”

In the morning, the daughter waltzed into the ger as if it were her own (because it was!) and started combing her hair in the mirror and preparing the yak’s milk, asking us to help her with various tasks. We felt bad for having taken their ger, but it was also fascinating to see their early morning routine and how the milk was processed. The husband came in too, and their three-year-old boy who started warming to us after initial trepidation and looks of “Why are these strangers in our house?” 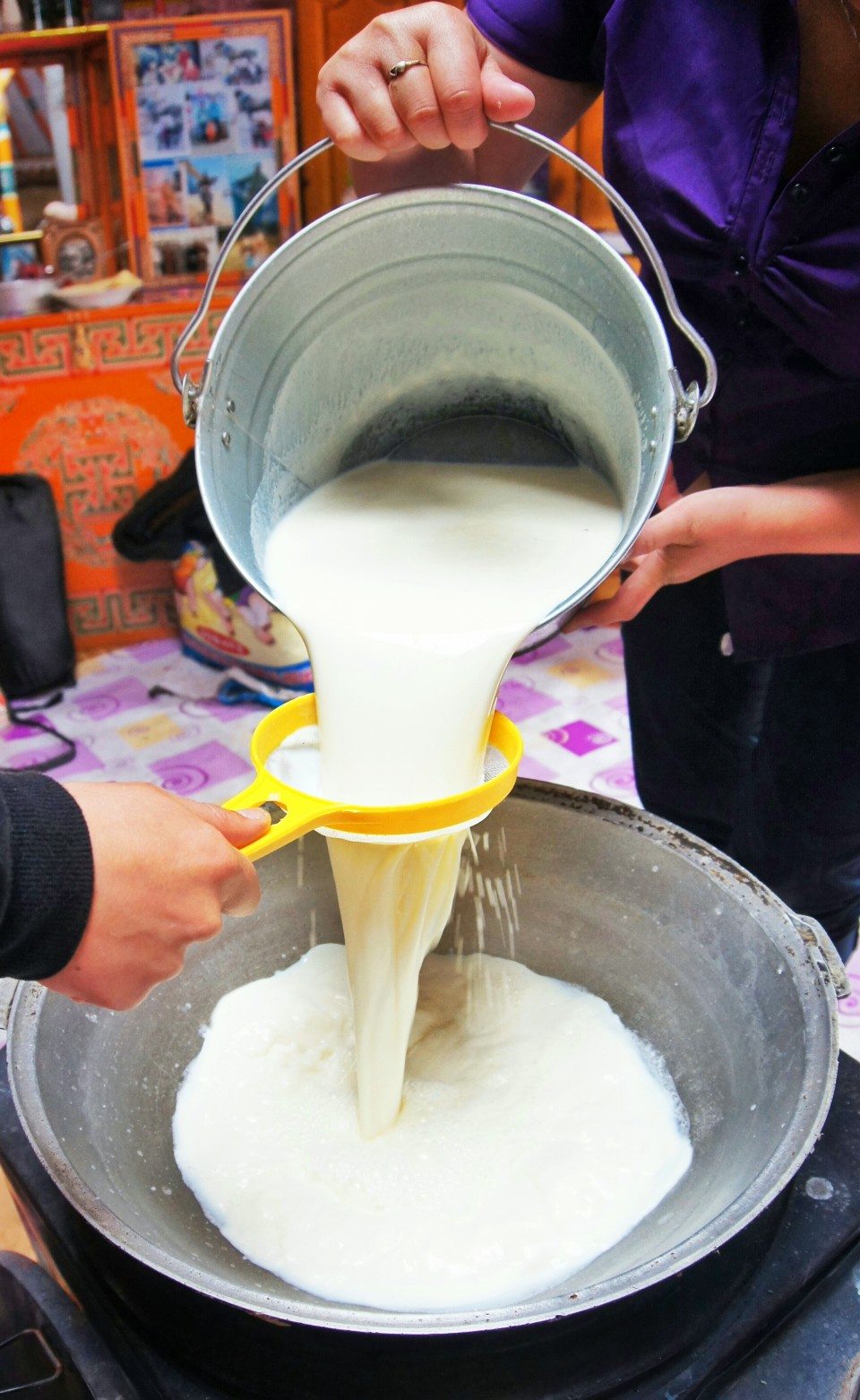 We ate toast with fresh yak’s cream scooped straight from the top of the heated milk, which was actually quite good and thankfully nothing like the curd turd. We played with their son and they were interested in looking at Hai’s photos. They showed us some of their family pictures too, notably one of their son just a month earlier with flowing long black hair. Apparently, Mongolian people believe that a child’s life begins at three so they get their first haircuts at that time. Now the cutie’s round face was even more pronounced with his close crop. 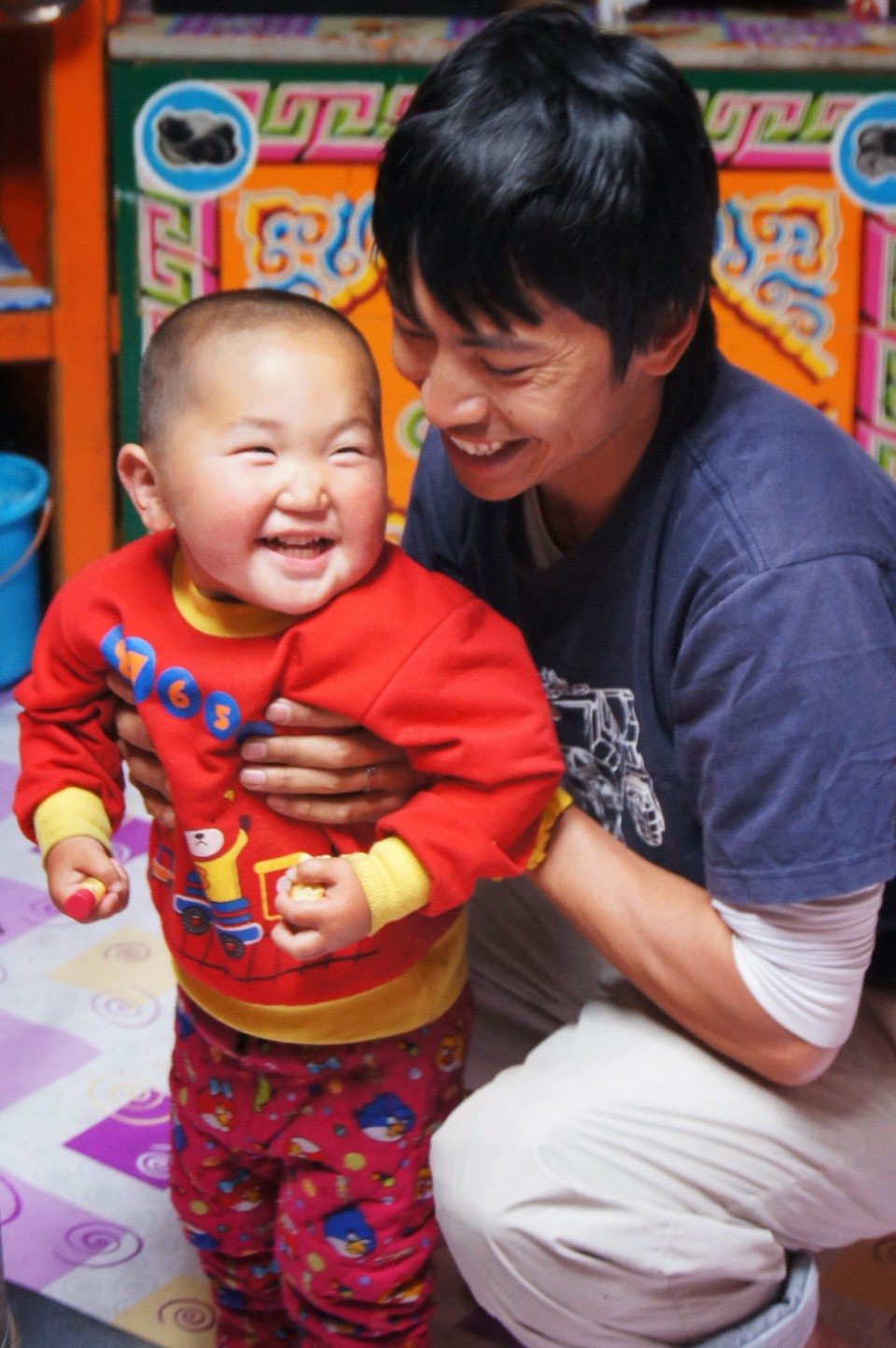 After saying our thank yous and goodbyes, it was time to go back “home” to the waterfall. The stallions were nodding their heads up and down and sniffing the air. Females were in the vicinity, a reminder of their strong instincts.

There’s something about a horse that knows it’s going home. Despite Go Your Own Way’s general preference for the back, he was one of the first to pick up the pace out of camp. He knew we were close. He could smell it.

At a fast pace, this final ride home would only be a couple of hours. It was comfortable to the point that it now felt joyous to ride, something I couldn’t have imagined in the very beginning.

With the wind whipping through our hair and the vast Mongolian countryside as the setting, it was one of those moments you think “Wow, I’m really doing this.” Go You Own Way went for the gallop through the hills home, and it was a feeling like nothing else.

Fantastic piece!I'm so happy that you and Go Your Own Way found some middle ground. : )

That ger is sweet!