There's something slightly petrifying about being handed a horse and being asked to ride it for days across the Mongolian countryside. Half-wild and uncastrated, these stallions had instincts that could only be somewhat tamed, and given the right set of circumstances, well, any human instruction is unlikely to have any sway.

Standing around the horses, the two horse guides who would be accompanying us on our four-day horse riding journey looked us up and down, determining who would be best suited to which horse. The French girl with the jodhpurs looked like she knew what she was doing – she would get the fastest and most expensive one.

Mounting the horse for the first time, you understood this wasn't going to be a pony ride. Just the horse walking around and pulling at the grass while we got ready to leave made me nervous. We were about to depart for days and my only riding experience was probably a carnival pony ride. But we had braided “horse-riding hair.” That makes a difference, right?

It started to rain, conditions that we had prepared for but were going to make this a long day. The horse guides, a father and son, indicated it was time to move off. Some of the horses moved with the guides, but mine was exercising passive resistance. It would turn out that lingering at the back of the pack was part of its complicated character.

We got right into it, starting with a river crossing. It was an anxious few first minutes as we got used to the rise and fall, and the unsteady movements of the horses on the rocky river beds. A while into the ride though, I felt more at ease. We were basically walking and the horse hadn't really done anything to cause me panic. The sun had come out and the stunning Mongolian countryside made the perfect backdrop to calm the soul and allow the time to pass by dreamily.

We got off once to have lunch and for a toilet break. Of course, toilets out in the wilderness are “anywhere” so Hai and I ventured off to a mound not far in the distance. As it turned out, that “mound” was an ancient burial site. “You mean where we peed? Why didn't you tell us?” Apparently not too much of a big deal as they headed over there too, although they probably didn't get quite as close.

A couple of hours of riding later and we were at camp. Tonight we would be camping by a river in tents, rather than a ger. With the tents up in quick time, we offered to help with the cooking but, as usual, our guide refused, insisting we relax. Looking for a way to be productive, I asked “Are we having a fire tonight? We can collect some fire wood.” It seemed we weren't, but then were. Walking towards the forest, it was clear why the son had suddenly shown interest in a trip out of sight from camp. He wanted to smoke. Something we knew his father didn't approve of after he refused a cigarette from our French companions at lunch. Being non-smokers, I ducked back to camp to discreetly get a lighter from the French girls who it seemed had been able to convince our guide to let them cut some vegetables. We're not usually ones to encourage smoking, but feeding his sneaky habit made us fast friends. And mind you, he is 26.

We gathered wood while he hid behind a tree. Small branches were quite abundant so it didn't take us long to bundle big armfuls and have enough that looked like all three of us had been searching all along.

Back at camp, we ate and then the guides went off to visit some friends living in a ger somewhere nearby, but not before Papa had arranged the sticks into a teepee-like formation, the ideal structure for building a fire and something we apparently needed assistance with. We could light it. 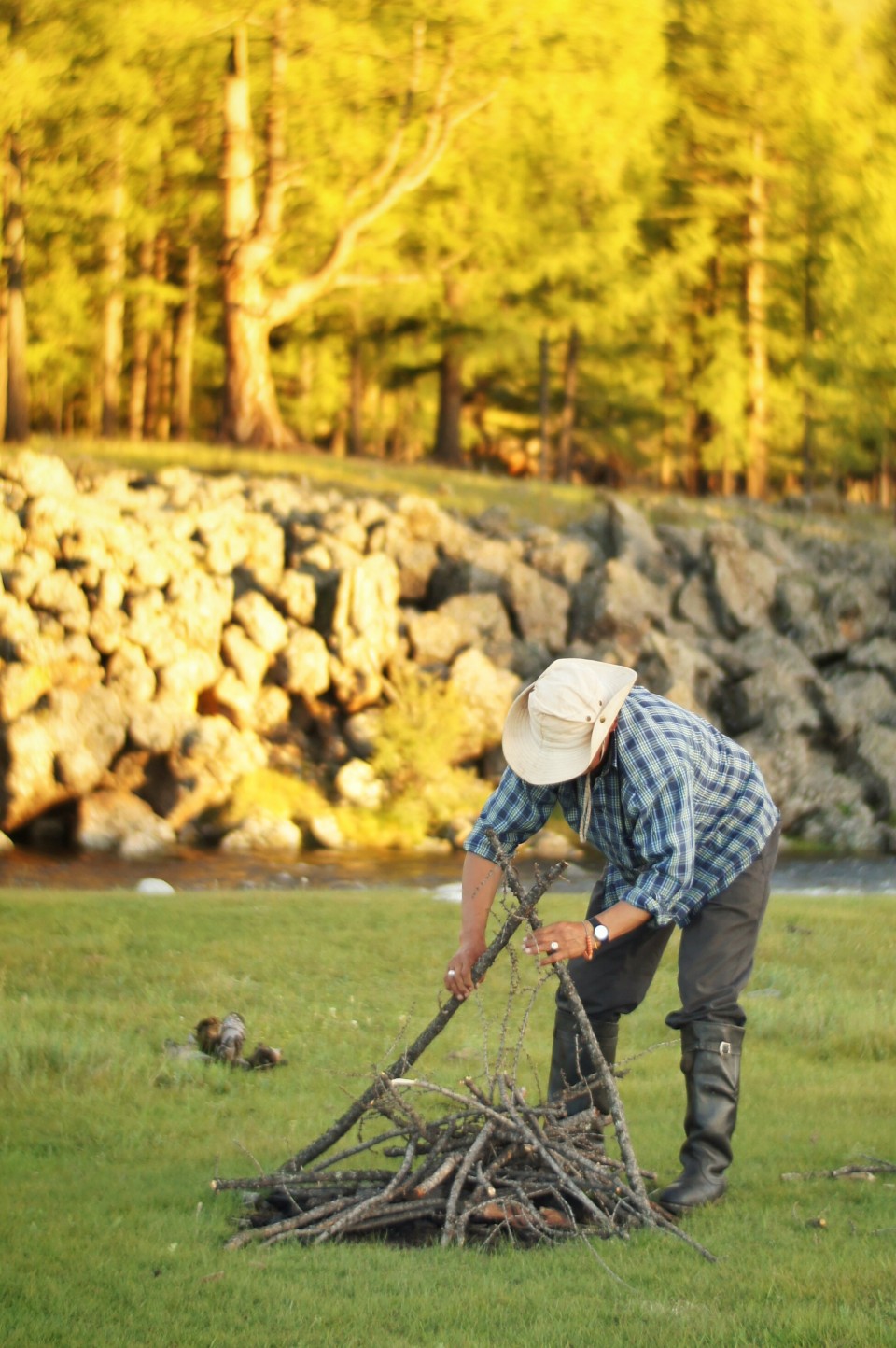 Left to the camp by ourselves, the four of us set about getting the fire going. It would be dark soon and surely not New Delhi in June. While there were plenty of small branches, there wasn't much kindling, the key to getting some good flame going to then light the bigger stuff, so we broke off bark from a nearby log and I tore as many pages as possible out of my notebook that were no longer necessary to keep, as well as fishing out a few random receipts that were tucked in it. We could only bring a few limited things with us as the pack horses had to carry them. 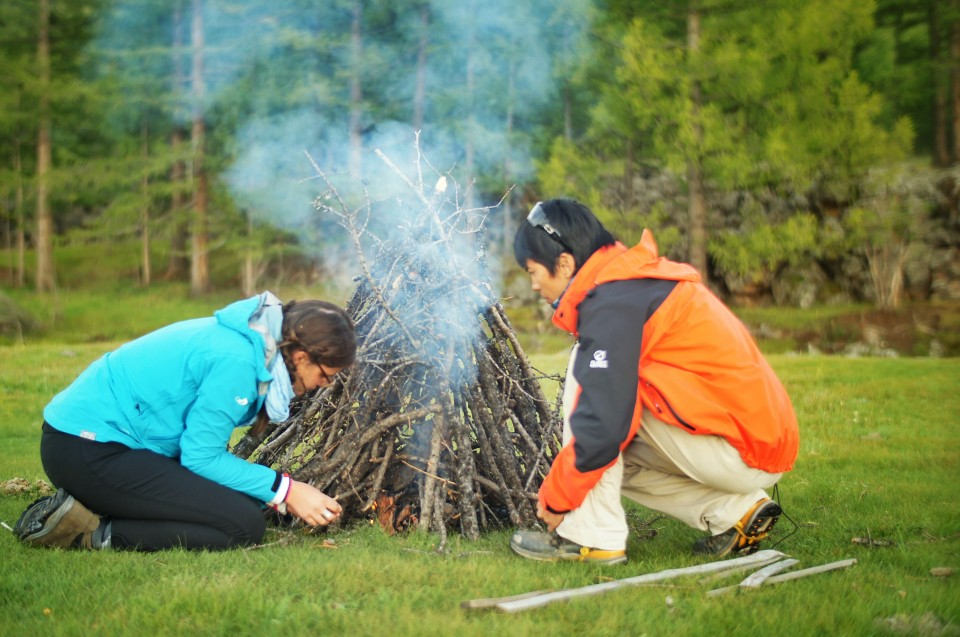 It took a while to get it going to the point that it was sustaining itself, but by the time the guides came back, they looked surprised and then laughed as they approached. Our guide translated for Papa. “You are very good people. We thought you wouldn't be able to light the fire so we brought some petrol from our friends' camp.” He'd obviously underestimated our inner pyromaniac tendencies. 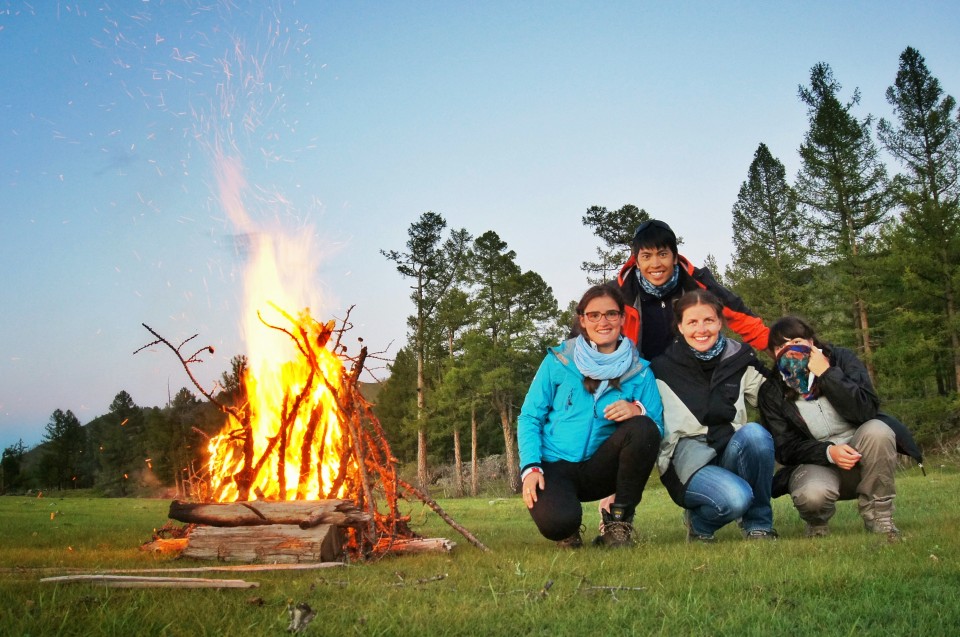 They joined us by the fire, taking out Mongolian dumplings and home-brewed vodka that they'd been given at the other camp. In true Mongolian style, we shared the drink from the same cup. Going clockwise around the fire, we had to drink the shot and then pass it back to be re-filled for the next person. We played cards under the almost full moon and Papa expressed his feelings of happiness.

“You are very good people,” he said again. “Today was your first time to ride the Mongolian horse, the half-wild horse, and you did very well. Tomorrow we will go even faster, and even faster the day after that. The last day, we will be racing home.”

He sang a folk song about the beauty of Mongolian nature, making sounds with his throat that we had never heard before. Despite my anxiety about the heightened pace of the days ahead, for now I could forget about all that and just “be” in this magical place. 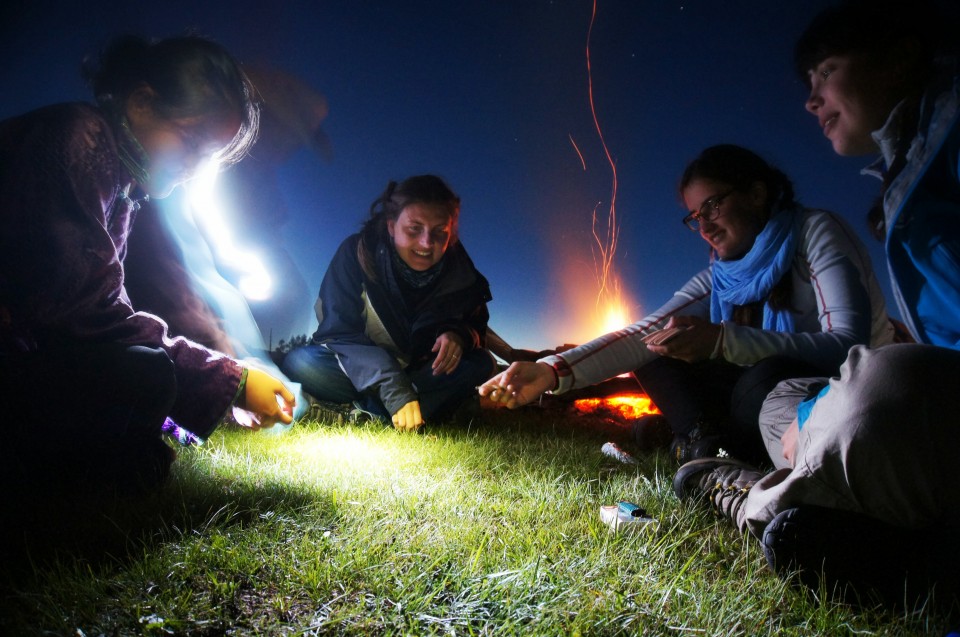 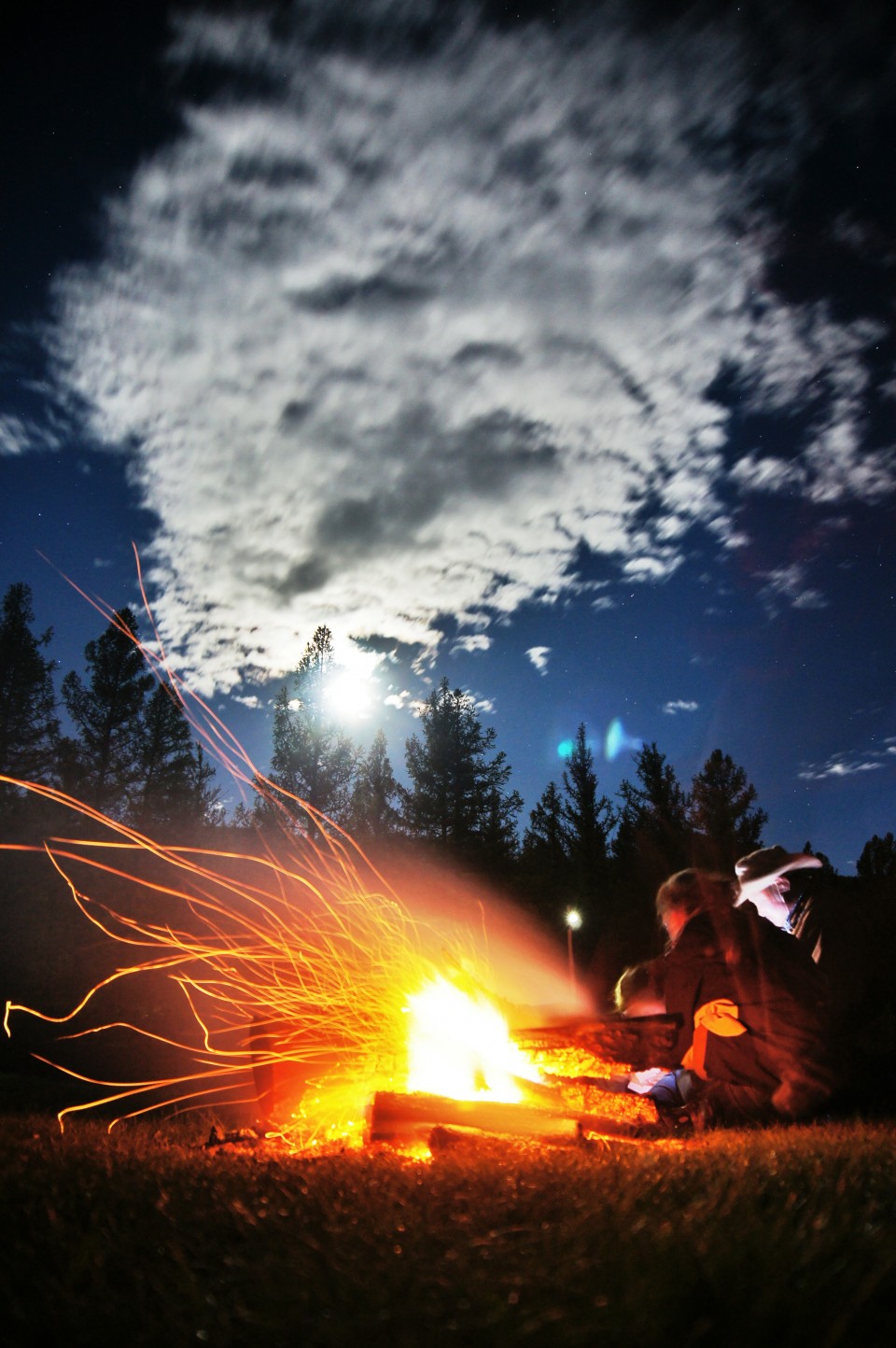 You guys are very good people. Love it!