Having left later than scheduled from camp, and with a long day of driving ahead, the driver didn’t waste any time easing into the bumpy conditions. This was to the almost unfortunate fate of a horse who, despite repeated beeping, was spared after some emergency braking brought the van to a stop within a hair of its mane.

The road conditions were noticeably worse than the day before. Most of the time was spent off-road on unsealed tracks due to piles of dirt blocking the way, apparently indicating roadworks ahead. The sealed roads weren’t any better with potholes the size of backyard swimming pools and the driver’s constant weaving in order to avoid them.

We stopped to see a family erecting their ger in a field, just in time to observe the tying of the customary 81 poles with braided horse hair and a welcome break from human pinball. 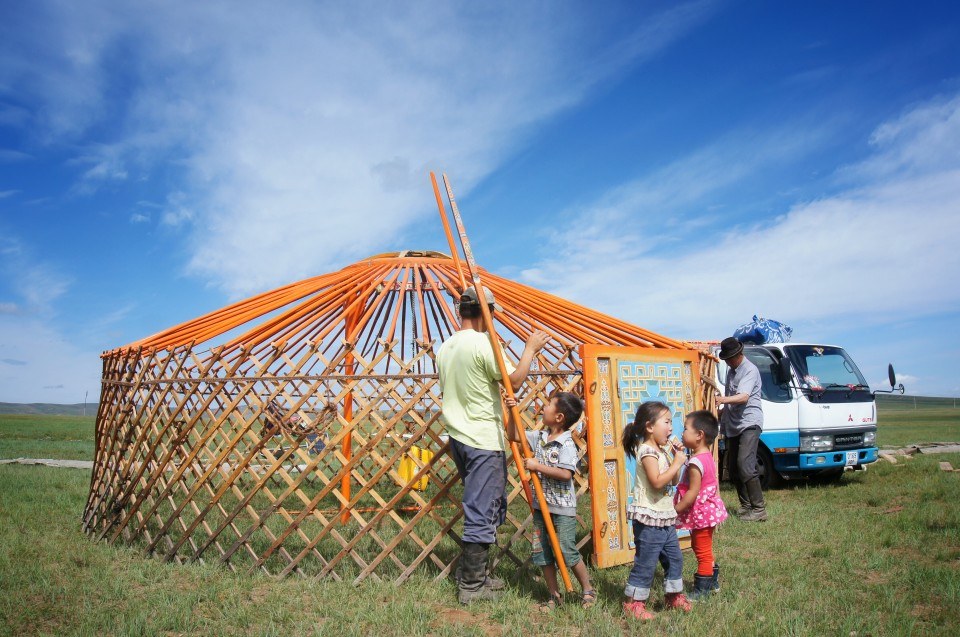 Young children wandered with rosy red cheeks, covered in fluff from the animals. We gave them some candy and cookies. They struggled to open the cookie packets, just kind of sucking and biting down on them, rather than using the precisely-designed edge to their advantage. I offered to open it for the youngest boy who pulled it closer and then ran away about to cry. 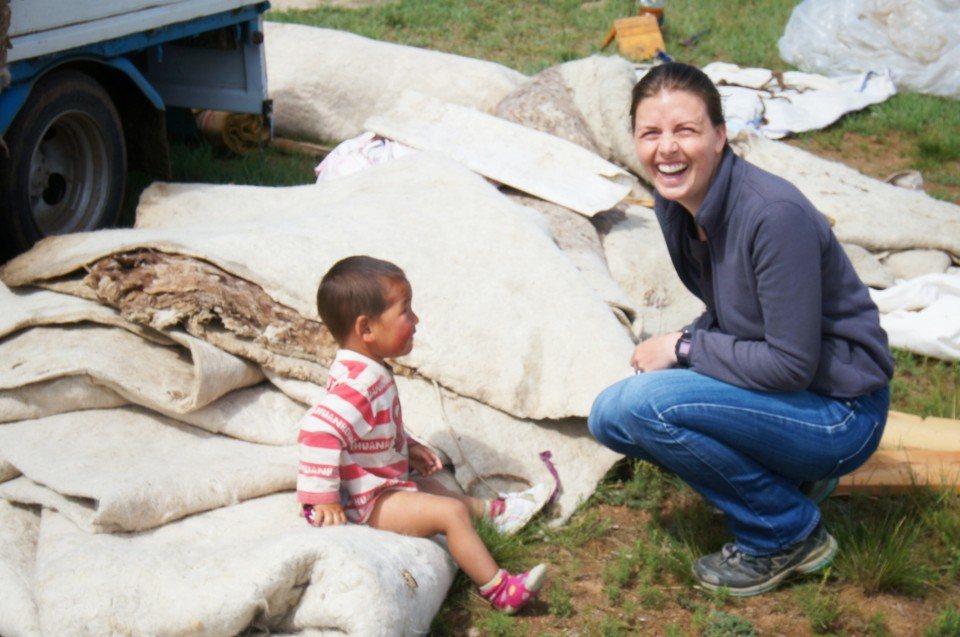 I asked the older brother and the others, gesturing opening it and then giving it back, but they refused to hand them over. Finally, I sought out the language skills of the guide to tell them what I was saying in Mongolian. “I’ll give them back. I promise,” I reiterated. They just shook their heads. “They don’t believe you,” she said.

At the halfway point of our journey, we stopped at the last village we would be passing through to buy gifts, as is Mongolian custom, for the four families who we would be staying with over the next few days. With our box of candy and bottles of vodka, we waited under a tree while the driver went to a repair shop to get a new shock absorber which unsurprisingly hadn’t survived the morning’s journey.

Within what felt like a minute of getting back in the rattling car, the guide produced a plate full of sandwiches from the front seat which looked so delightful to my empty stomach that I swear I saw shiny golden light emanating from them. How in the world did her fingers survive the slicing and dicing of cucumbers and tomatoes on this rollercoaster?

A few more hours of pinball in the backseat and a few river crossings later, we arrived at camp. The first order of camp life was to visit the owner’s ger where we put in practice the ger etiquette we had learned so far: stepping in with the right foot first, not stepping on the threshold and moving to the left, the “guest” side of the ger. We were welcomed with hot cow’s milk and what I have labeled the “curd turd”, a rather unfortunate Mongolian snack, literally curd in the shape of a pile of waste.

When instructed we gave the gifts, then spent a few minutes trying to get through the humungous cups of milk before the guide indicated it was time to take our leave. Outside, Hai's face told the story. During the quick exodus, he shoved that curd turd in, experiencing the full nauseating flavor in moments that may go down in history as one of the worst culinary moments of his life. “How did you guys get through it so fast?” Grinning, the three of us – me and our two French tour companions – pulled out our virtually whole curd turds one by one from our pockets. “Oh, man! I thought you guys had finished them so I thought I should too!” Laughter ensued. Us girls had all come to the same conclusion after first taste bud contact against the moldy rock – that thing had to go!

Later back at the ger, we re-convened in whispers. “What did you do with your curd turds?” I asked the girls. “Well, we thought we couldn't just drop them anywhere in case someone finds them, so we went up the mountain and crumbled them up.” “What did you do?” “I threw it into the toilet.” The toilet was a pit in the ground covered with wooden boards, with holes cut through them for doing one's business. “The problem is you can still see it down there.” “That's exactly what we were worried about,” they responded. “OK, everyone aim for that thing!” It turns out that's not so easy. Curd turds are so hell bent on sticking around that they don't disintegrate in liquid and anything you try to put down there somehow misses the mark.

With plenty of time left before the sun would set, we averted our attention from the hopeless curd turd situation and went to get a closer look at some yaks. “You should keep a distance of several car lengths,” our guide advised. “They are Mongolia's angry animal.” Yaks aren't exactly the best looking of animals but they are kind of cool, and when you have horns like that, well, you kind of demand respect.

The “big waterfall,” the main reason why people camp at this particular point in the Orkhon Valley, was not too far off. The guide had pointed out a house with a red roof in the distance. We should continue following that line. The river branched off into all kinds of smaller waterways. We jumped from bank to bank, strategizing on the best route to reduce the number of jumps required and chances of getting wet. With some requiring a good run-up to maximize air-time and distance, it was equally a leap of faith as it was with one's legs. 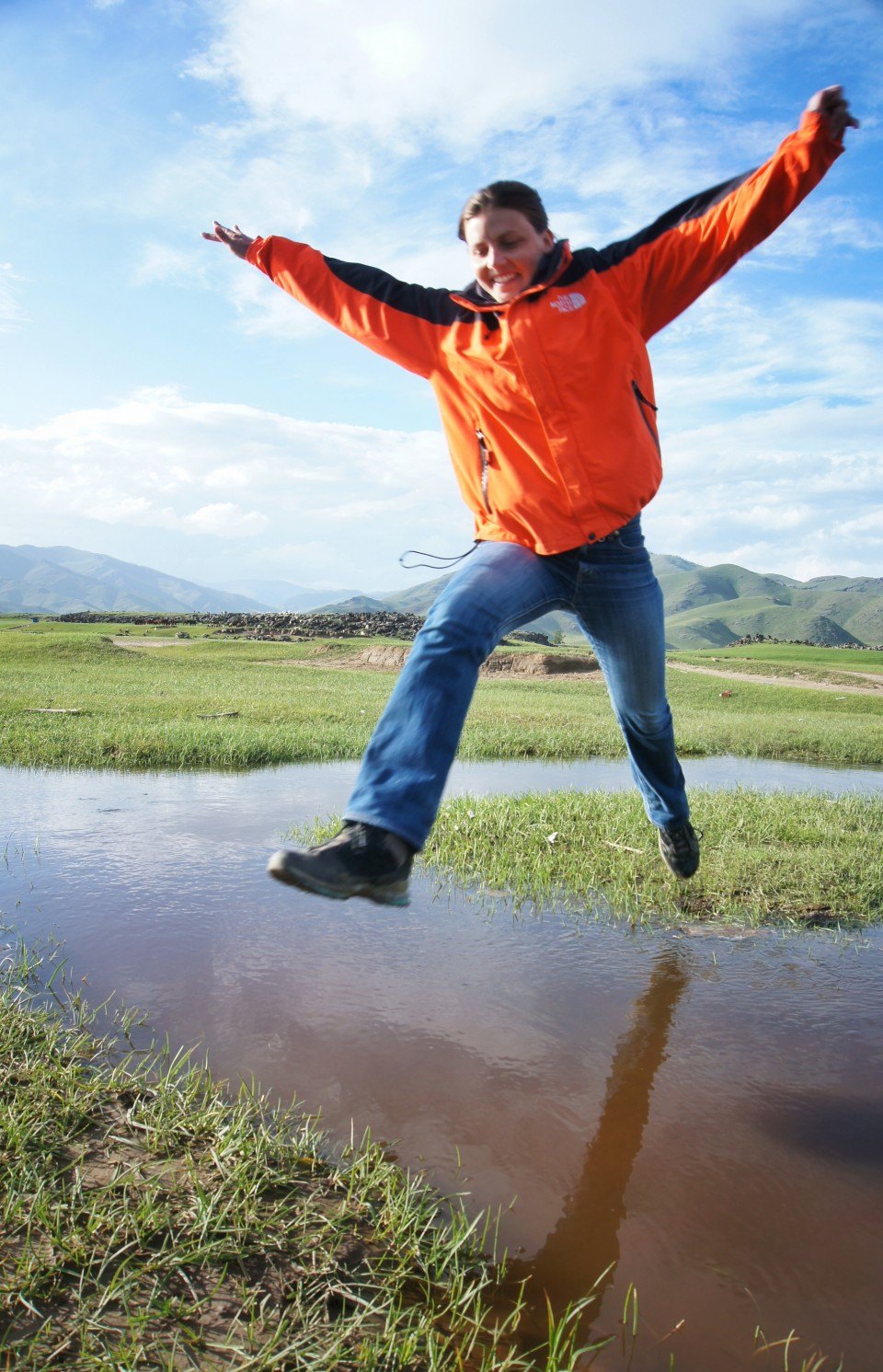 Clearing the water, it was just a matter of walking from there. You can't see the waterfall from a distance, but once you descend upon it, a gorge suddenly opens in front of your eyes and a powerful gush of water assaults your senses. 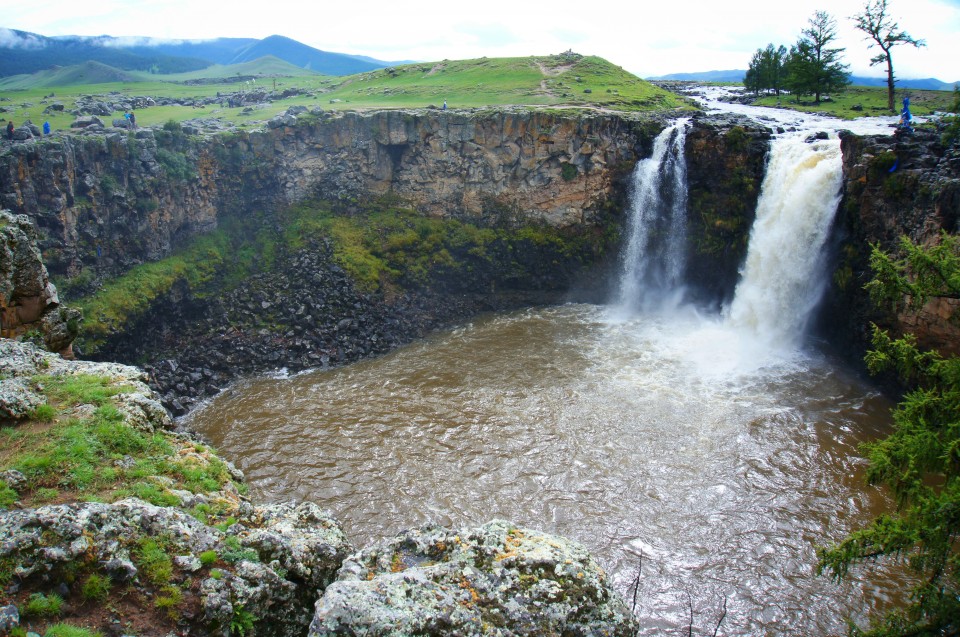 The clouds looked angry. It was time to make a move. We picked up the pace, cutting through the outdoor museum of bones and taxidermied specimens oddly positioned on the grass and skipped across the strategy water game. We got back just in time before the rain came. Luckily the ger also had a fireplace to keep out the chill and the owner came around within minutes of the downpour with wood and a blowtorch to get it going fast.

That night, we played poker with our French tour mates using some extra candy we had bought for any kids we might meet along the way as chips to determine who would get the job of waking up at the most uncivilized hours to add wood to the fire.

Dashes to the bathroom about a hundred meters away were internally debated for the longest time until you came to the realization that no “break” in the deluge was coming and you just braced yourself for the saturation beyond the ger door. The jumping to and from the waterfall proved good practice for the temporary river that had formed between point A and point B. Despite the toilet having no roof and the heavens pouring unrivaled buckets into the pit, there was the curd turd. Still true of form and an obnoxious yellow that was difficult not to notice. Shit!

Mongolian Gers: What they are and the Do's and Don'ts of Ger Etiquette

[…] Typical snacks include bread, dried curd or sweets. Sometimes you may be offered a full meal. Click here for our hilarious “curd turd” encounter. […]

Ok, that's funny! I plan to travel through Mongolia next year. I will brace myself for the "curd-turd".

Wow, how amazing is that story. Is the curd not particularly tasty?

We'll try just about anything once, Nicole. And we love to try local foods. But this one has to go in the "tried it once, don't need to try it again" basket hahaha