The first Sunday in April marks the celebration of the Shinto fertility festival, the Kanamara Matsuri or the “Festival of the Steel Phallus.” Known colloquially as the “Penis Festival”, these festivities celebrate just that: the power of the male genitalia. And it is an event that is gaining increasing popularity, especially among foreign visitors, each year.

The next Kanamara Festival will take place on Sunday, 7 April 2019.

So you're probably wondering why the Japanese celebrate the “steel phallus.” Well, legend has it that sometime back in the Edo period (1603-1867), there was a sharp-toothed demon who fell in love with a beautiful woman. The woman, however, didn't return the demon's affection and decided to marry another man. Angering the demon, he inhabited the woman's vagina before their wedding night and when they tried to consummate the marriage, the demon bit off the groom's penis with his razor sharp teeth.

When the woman remarried, the jealous demon once again made his feelings clear by biting off her second husband's penis. Deciding that enough was enough, the upset villagers concocted a plan to trick the demon. A local blacksmith forged a steel phallus and upon its insertion, the demon's teeth were broken and he left the woman's vagina for good.

Sometime thereafter the legend was commemorated by way of the Kanamara Matsuri and the enshrinement of the actual steel phallus at Kanayama Shrine, constructed to honor Kanayama Hikonokami and Kanayama Himenokami, the Shinto deities of childbirth and lower abdomen health.

The Kanayama Shrine then became renowned as a site for sex workers to pray for protection against STDs. Nowadays the shrine is said to aid fertility and is often visited by married couples hoping to start a family. The festival itself has also become popular with the gay, lesbian and transgender communities.

They have come up with additional monkeys at this shrine. 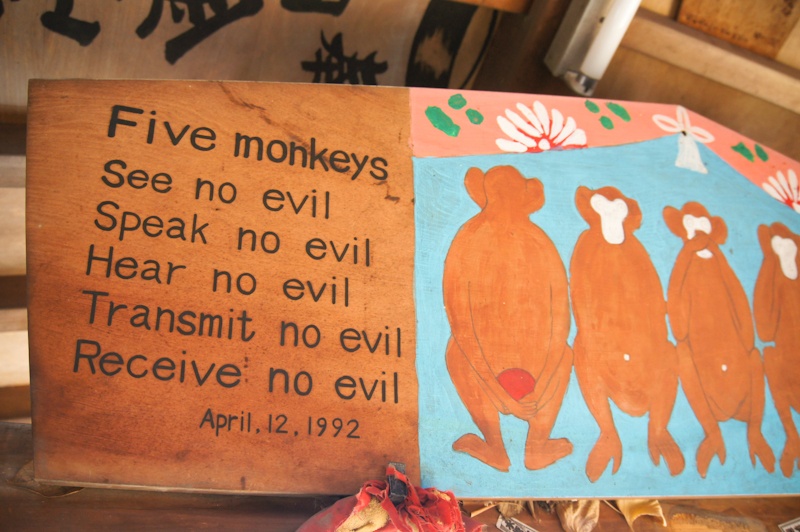 So what happens at the festival?

Well, imagine a whole lot of items and activities dedicated to the male sex organ.

First you are welcomed to the shrine with some festival-appropriate signage. 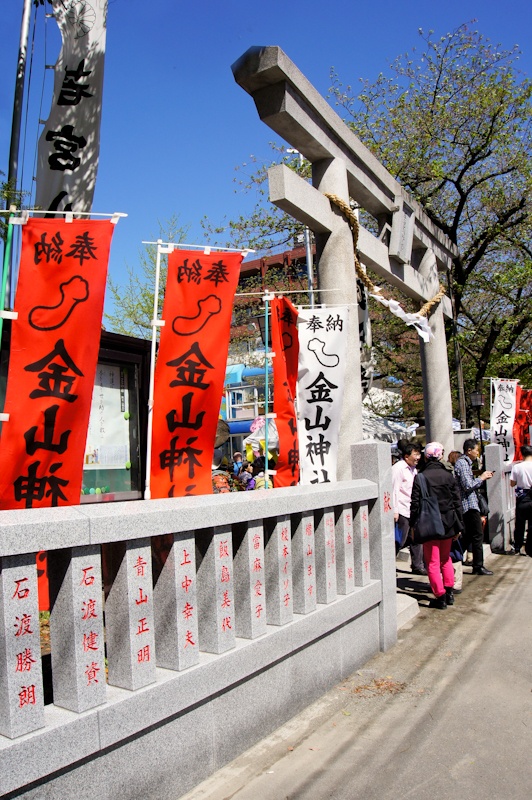 Along with food and drink vendors like any typical Japanese festival, there are also stalls selling penis-themed souvenirs including key chains, trinkets, pens, toys and chocolates. 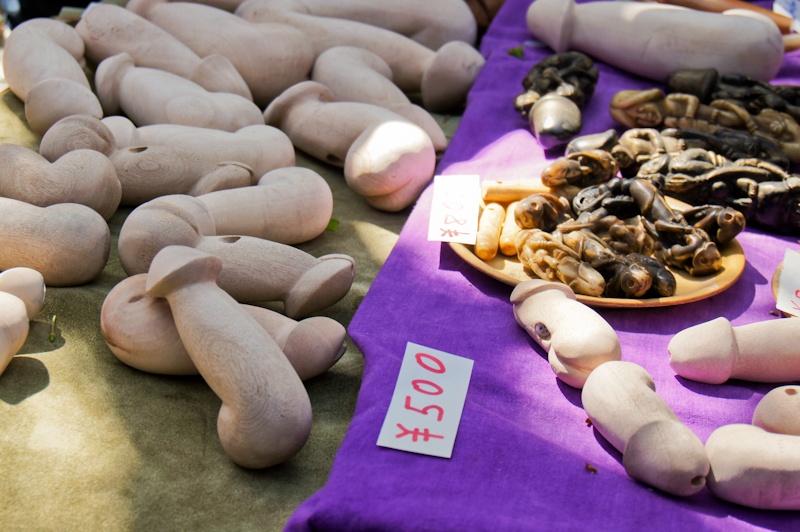 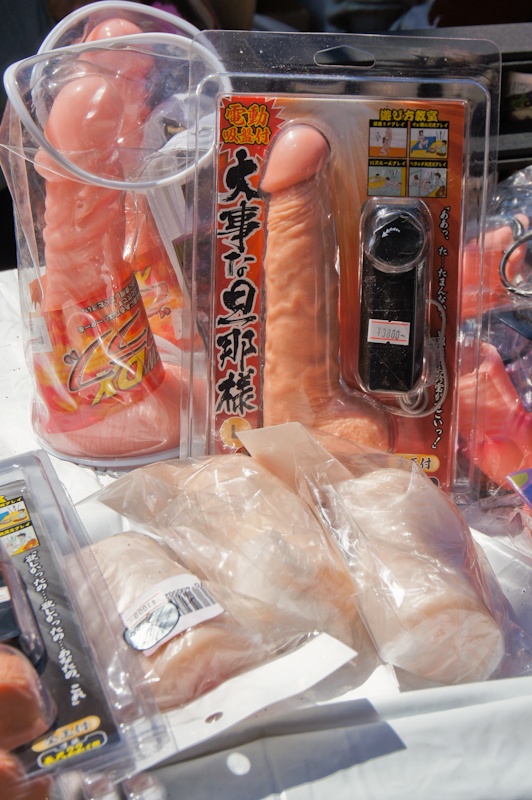 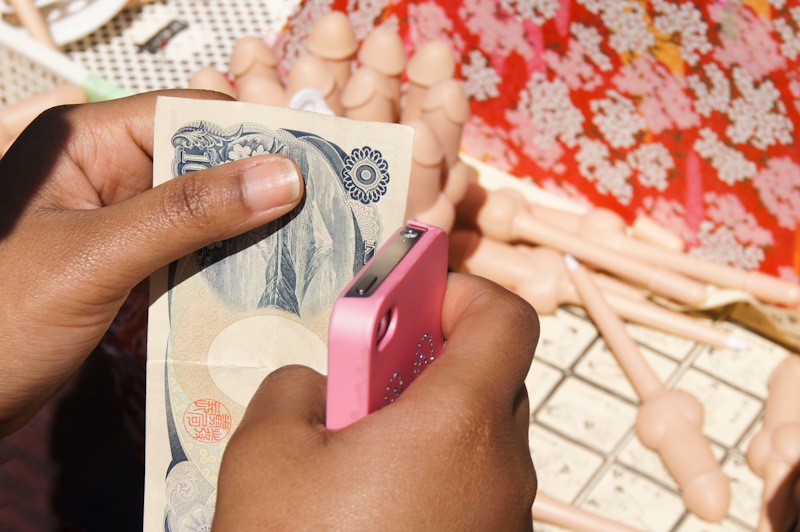 Or how about a penis candle? 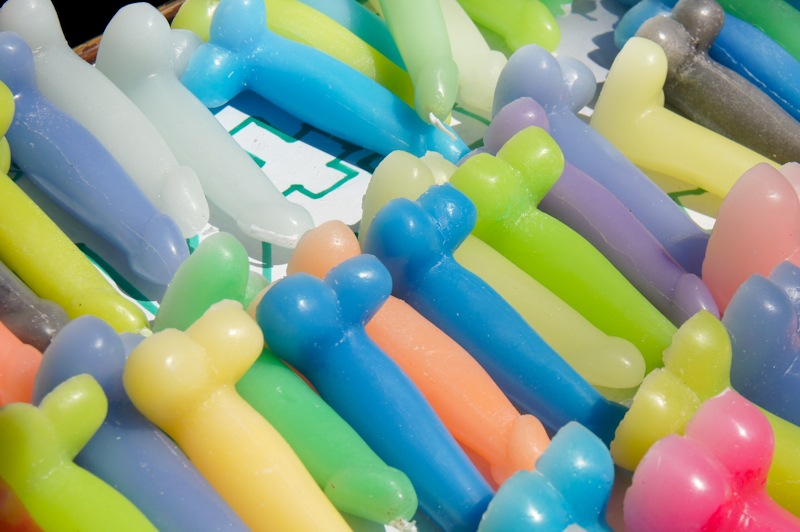 Or maybe a pair of glasses with a penis nose attached? 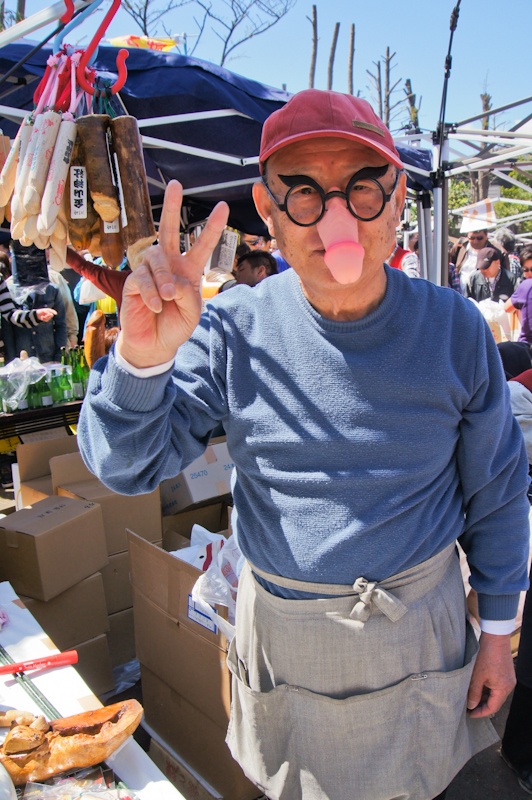 These visitors walked around asking if anyone had a tissue! 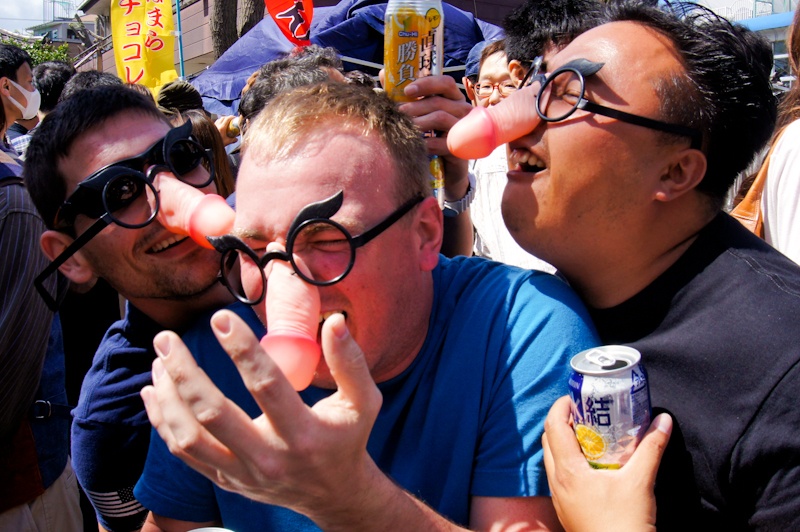 The most popular item would have to be the penis (and vagina) shaped lollipops. Grab one early to ensure you don't miss out and avoid the long queues (they can and do sell out). 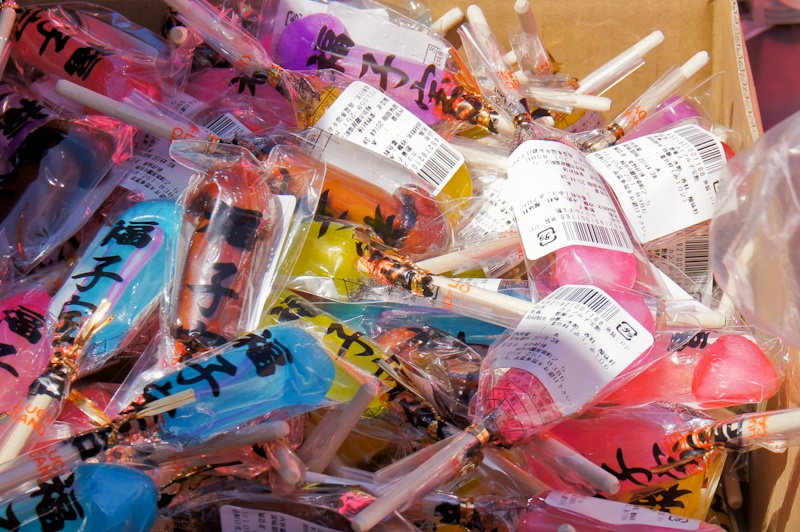 Just take a look at the crowds trying to get their hands on one! 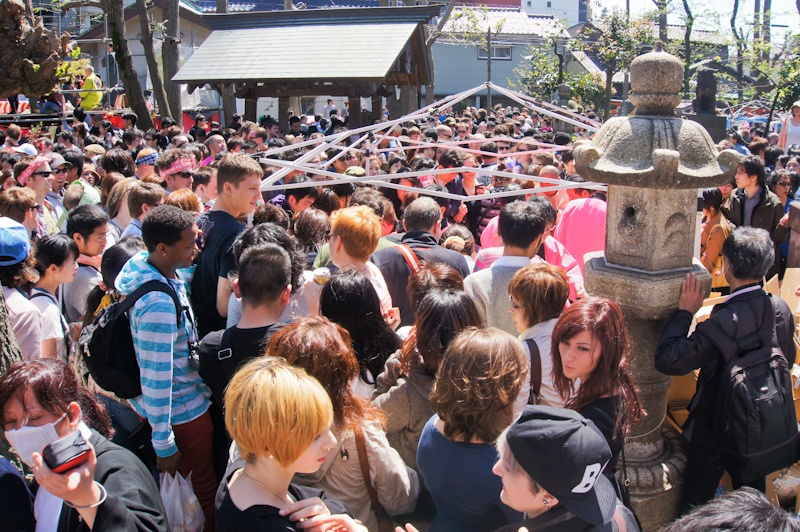 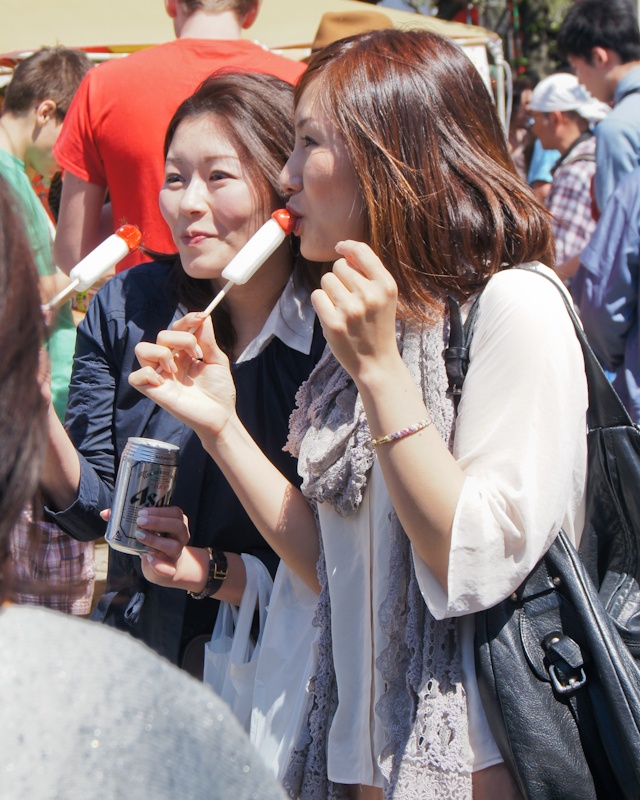 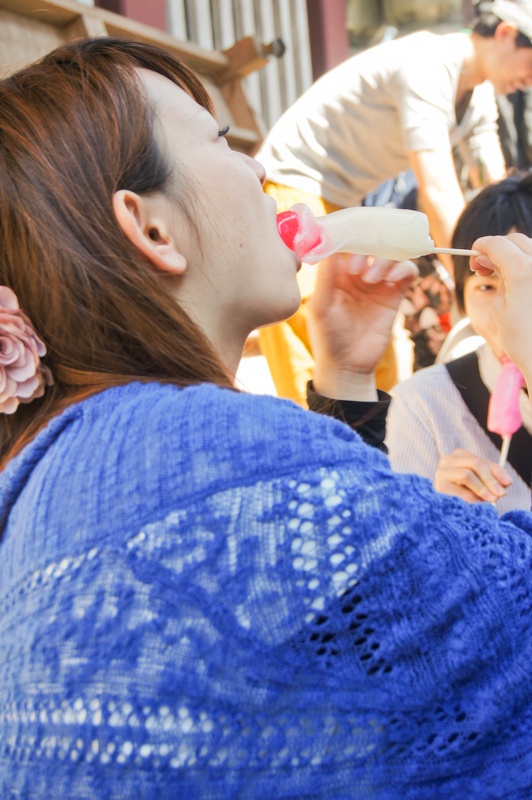 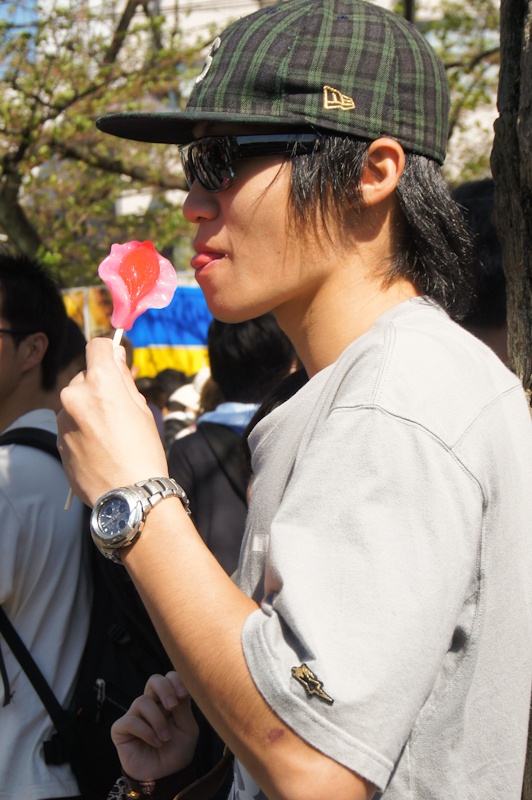 And if you're wondering whether to open your wallet, all the proceeds from items sold go to AIDS research.

There are plenty of opportunities to pose with other phallic items too. 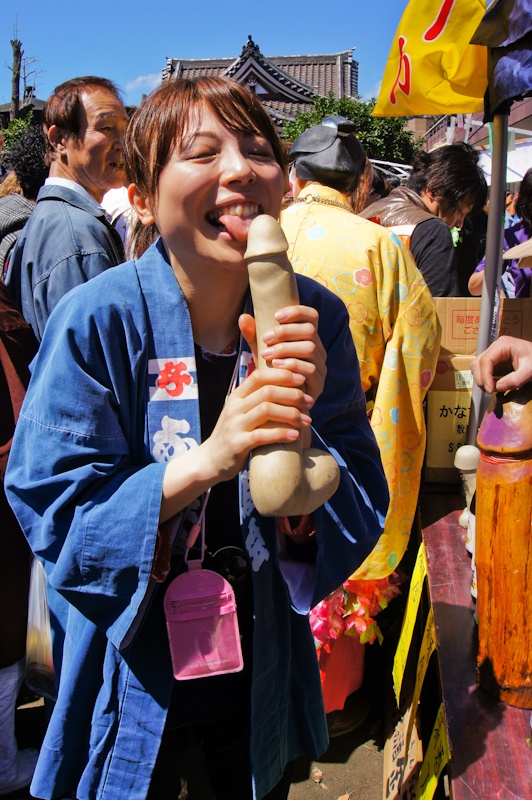 Give this guy a small tip for a photo and he'll show his appreciation. 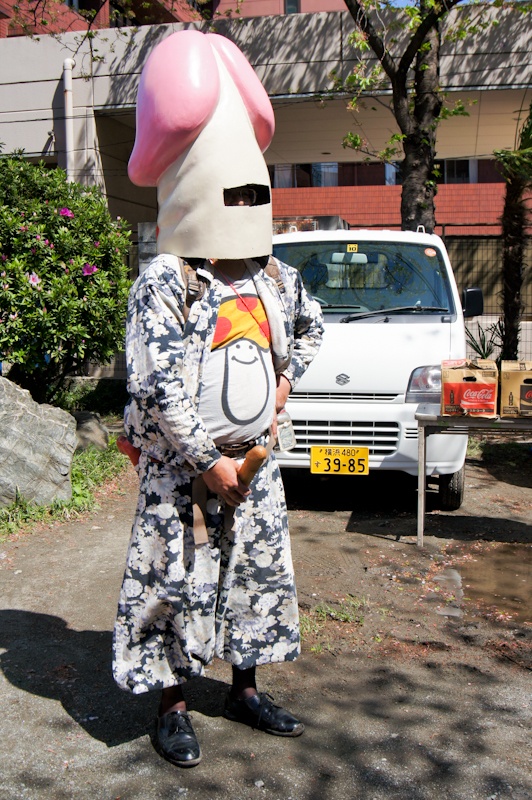 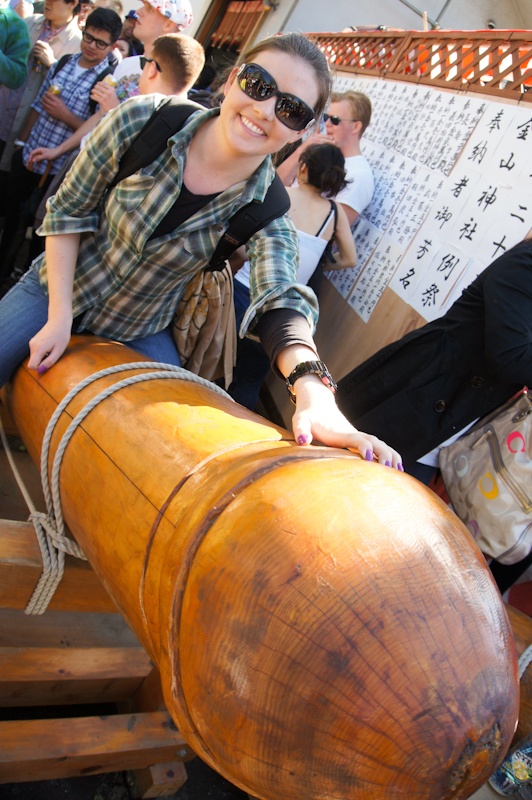 Or a bottle of “testicle-vagina” rice wine? The bottle of sake that the woman is holding here is sold at the festival as a kind of play on words with the characters used for this “Kingyoku/Banko Happy Set” (as Japanese kanji characters can carry different pronunciations and meaning depending on context). While the first word could be taken to mean “testicles”, it's actually in reference to the expression kin-gyoku ryouen, meaning “flawless jewel.” And while the second could be mistaken for “vagina”, it's referring to the expression ban-ko fu-eki, portraying a permanent state of goodness or quality. 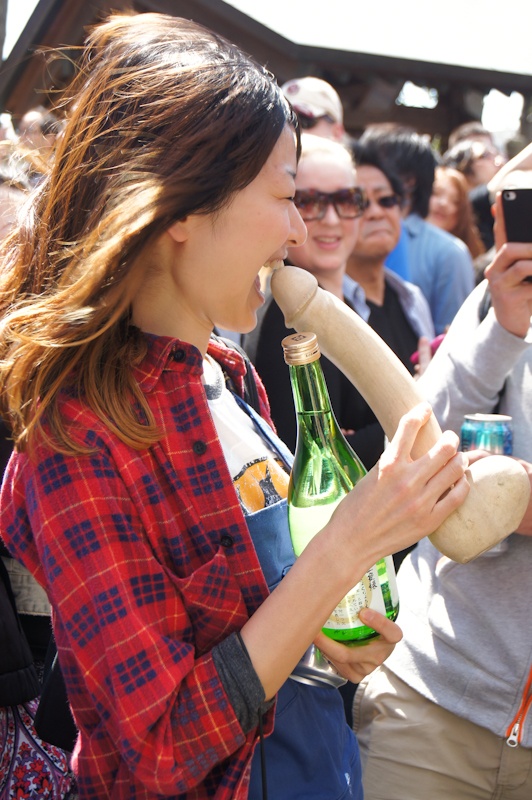 If you can't wait to drink your sake, then the free tasting from early afternoon might be up your alley. But of course there is a Kanamara Matsuri twist! You eat a small dried fish before swallowing the amazake (sweet sake). Why? The sweet cloudy white sake mixed with the salty fishiness of the dried fish is said to mimic both the look and taste of semen! 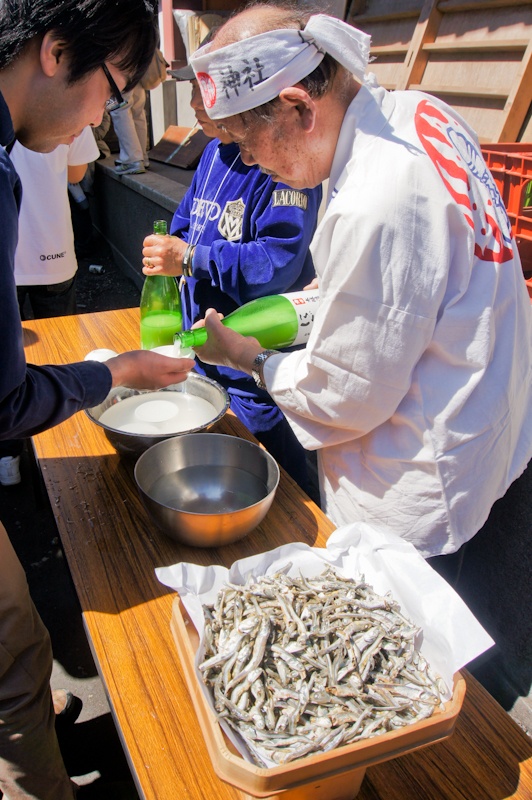 Or maybe you'd like to try your hand at carving a penis out of a radish? 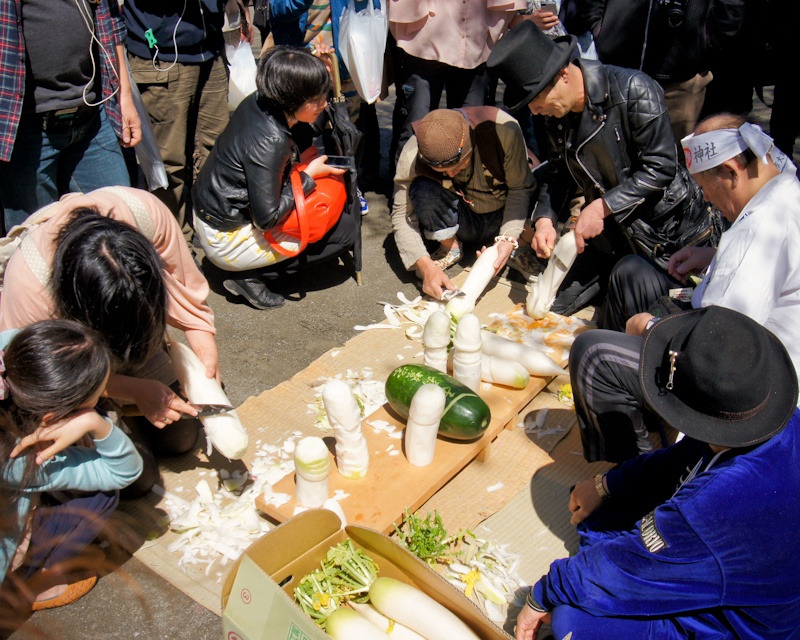 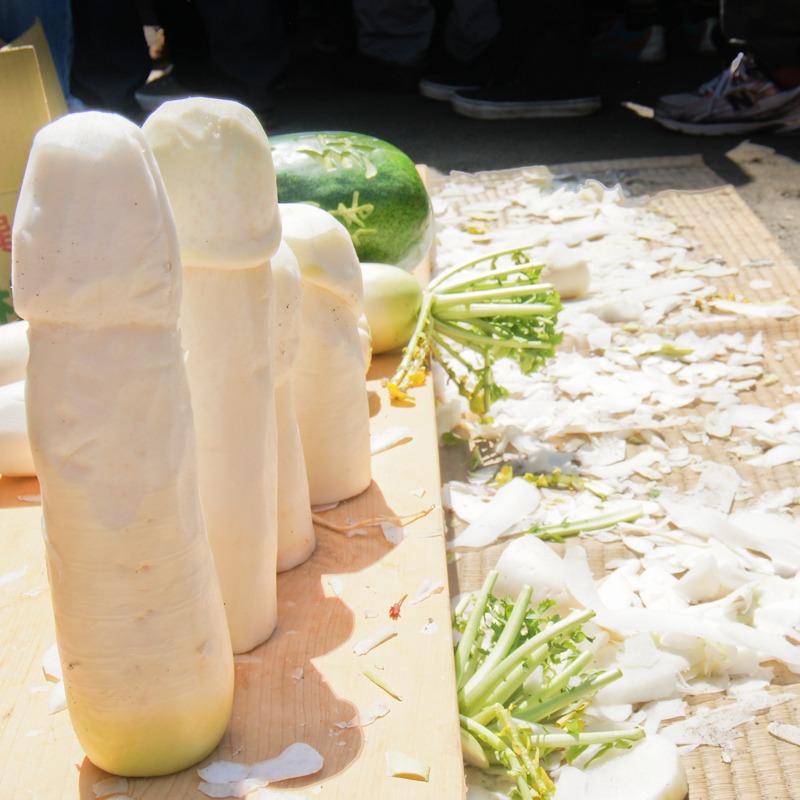 Perhaps the highlight of the festival are the three large phallic portable shrines (mikoshi) that are carried throughout the streets in a parade from around midday. There's the “Kanamara Fune Mikoshi” – a steel penis in a ship – which represents the steel phallus that the woman used to dispel the demon… 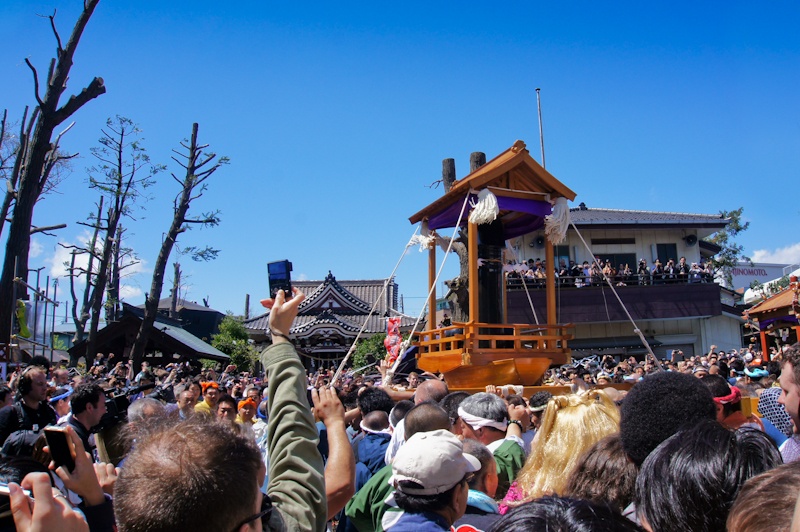 The “Big Kanamara Mikoshi” made of wood… (here they are carrying out a Shinto ritual in order to “transfer” the Gods from the shrine to the portable one to be carried through the streets, and to bless/purify it). 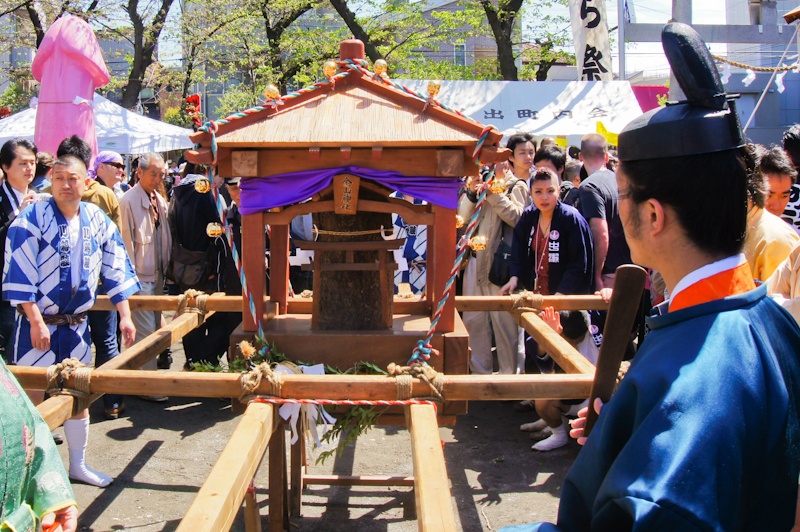 And then the standout pink penis mikoshi known as “Elizabeth” which was donated to the festival by Tokyo drag queen club Elizabeth Kaikan. 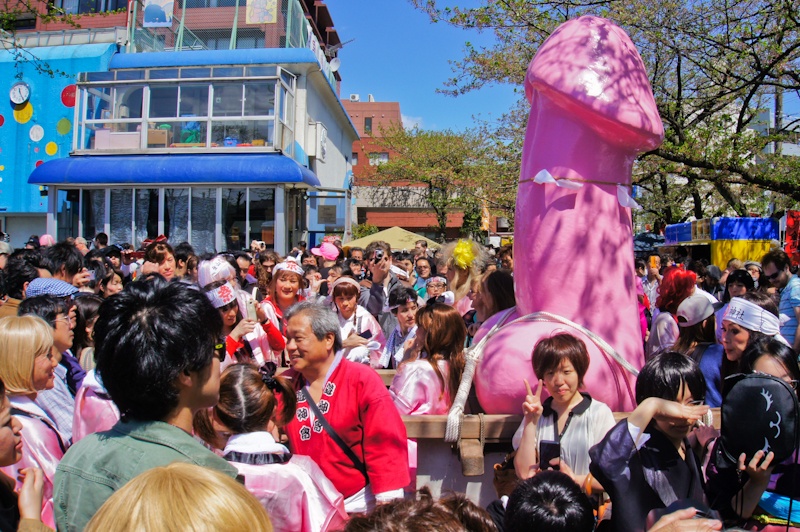 “Elizabeth” is famously carried through the streets by trans-gender/cross-dressing festival participants. 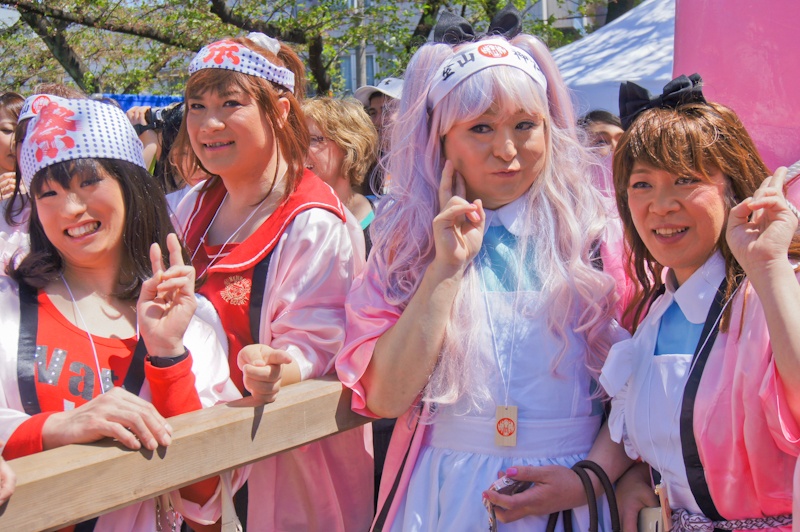 It was a very windy day and “Elizabeth” took on a precarious lean. You can imagine how it sounded to have people in the crowd start screaming “The penis is falling!” 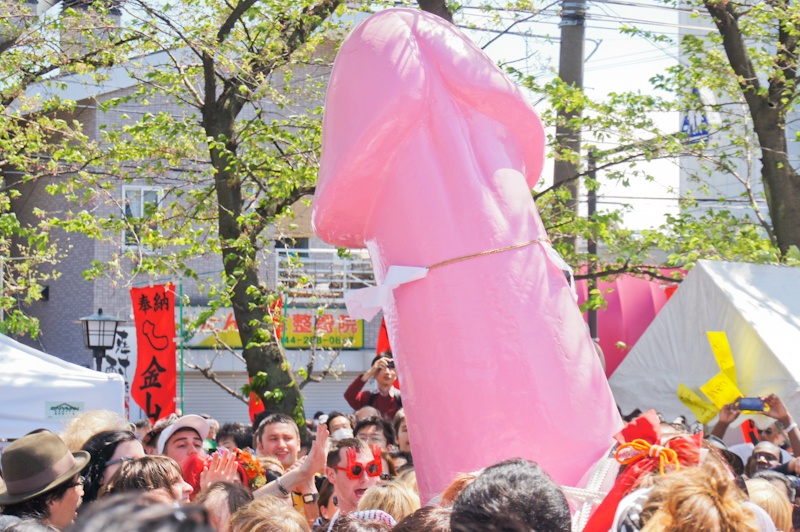 The portable shrines are carried throughout the streets for around an hour and a half before being returned to the shrine so there are plenty of opportunities to take pictures with them both before and after, although the large crowds can make them difficult to get to, especially around midday before the parade.

If you wish to go out onto the streets to follow the parade, make sure you get out of the shrine before 12 as they block off the exit right before the mikoshi leave and it becomes so cramped in there that you literally can't move. Otherwise, you can follow the mikoshi from a distance after they leave and the exit clears. Anyone can participate in the parade, and the shrine actually loans out kimonos to anyone wanting to don one and join in.

Be sure to also wander the festival grounds to take in some of the other cultural displays. 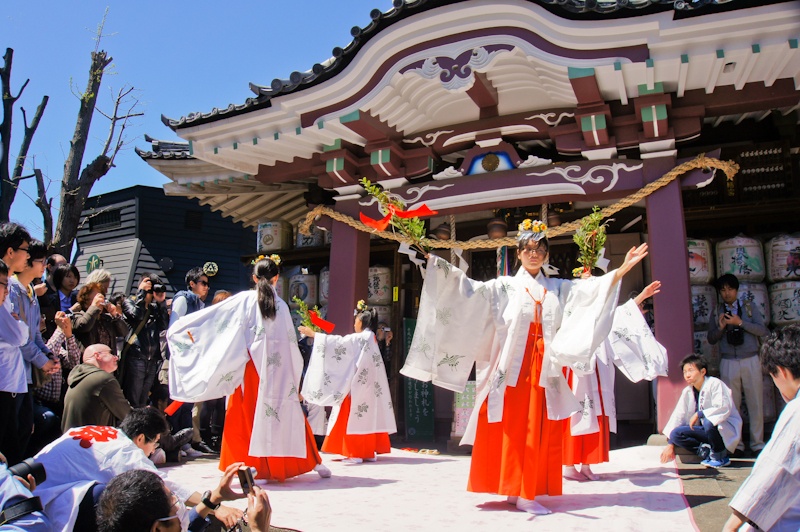 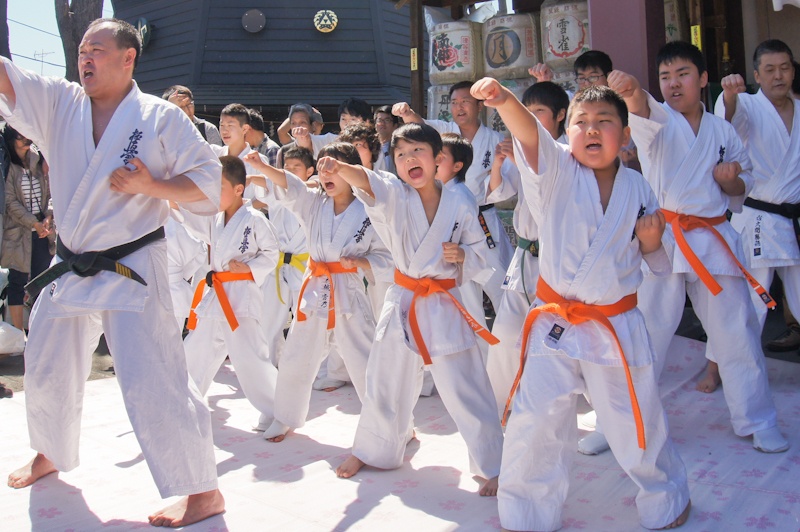 And if you are wanting to get pregnant, then you can take advantage of being at one of the last remaining fertility shrines and pray to be blessed with child. 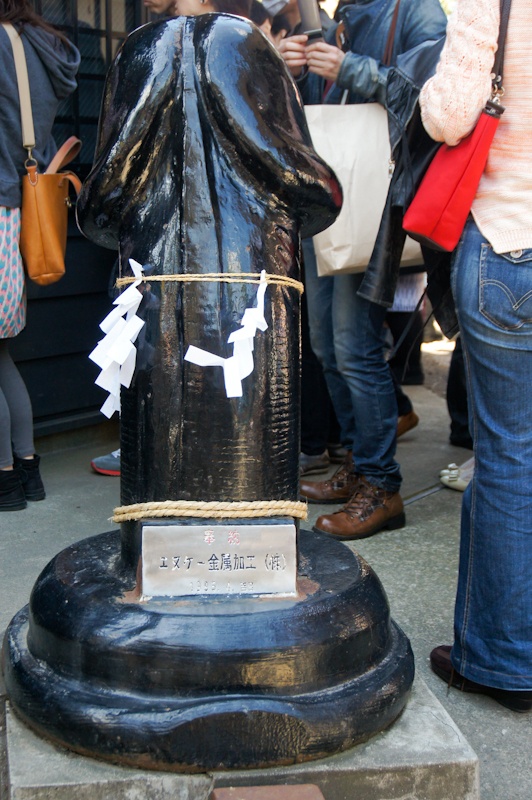 It may appear to be an outlandish display of sexuality (and in many ways it does make Western culture seem quite prudish), but many would argue that the openness of the festival is a healthy one which celebrates the ability to reproduce. In fact, many Japanese visit the festival with their children and happily go about giving them a penis lollipop or propping their babies up on a phallus for a picture without “sexualizing” it in any way. I even passed by a family who were buying penis candles together, the children contemplating with the utmost seriousness which color would look best in their rooms.

It is also a place where people of any sexuality are welcomed and the festival exudes a kind of acceptance that I haven't seen so often in Japan, where ideas of homosexuality and sex change are often ignored and/or repressed as “not the done thing” by society at large.

So why not experience something you don't see everyday and embrace sexuality, whatever your preference, by celebrating the life-creating male sex organ.

Where: Kanayama Shrine on the grounds of Wakamiya Hachimangu Temple, Kawasaki, Kanagawa, Japan.

Time: Officially 11am to around 4pm, however, this festival is getting so incredibly popular these days, it's already packed at 9am. Our word of advice: Go early and head straight for the lollipops so you can avoid the long queues later. The parade takes place from around 12:00-13:30. Other activities conclude around the same time, although the stalls remain open and phallus items are around for more picture taking.

Access: Kawasaki-Daishi train station on the Keikyu Daishi Line. Take the south exit. Upon exiting, you'll see a Sunkus convenience store across the road. Take the street to the right and the shrine is just a minute or so on foot on the right hand side. Just follow the crowds.

From Shinagawa (Tokyo), take the Keikyu Main Line to Keikyu Kawasaki (around 10 mins on the Rapid Ltd. Exp. or around 25 mins on the local service) and change to the Keikyu Daishi Line (5 mins). Total fare ¥240.

The Greatest Attack Name of All Time: Star Gentle Uterus

I know japan is Weird enough with all of their culture and habbit. but this is.. the .. umm.. uniquest ?

[…] While there are some interesting and bizarre festivals that include bonfires, deadly log rides, and giant phallic-shaped ice creams, floats, and toys, what about the off-the-beaten path year-round temples or […]