Di dit. Di dit. Our phone alarm sounds. It's 4am and all my body wants to do is press snooze and roll over. Whhhhhyyyyyyy?!

With all the super early flights and whacked schedules we've had during our travel lifetime, you'd think I would have become adept at sleeping when I can. But no, tell me I have to get up early for something, something important, something I can't miss, when I need every moment of rest I can possibly get, and I'll be restless all night. Guaranteed. Waking up more exhausted than when I finally hit the pillow, after no doubt having stayed up later than I had planned preparing for said important thing in the morning.

Luckily the whhhhyyyyyy of it all was pretty damn special and quickly got me up in a panic for fear of actually dozing through. One of those bucket list items and a dream experience for many, we were going on a hot air balloon ride over Cappadocia!

Now for those of you who have been following us for a while and have read posts like our bungy jumping experience in Japan, you might be like, “Hold on, Jess, aren't you terrified of heights?” Yes, yes I am. But funnily enough, hot air ballooning doesn't scare me in the slightest. It's weird. In fact, I love it, and from a young age I always thought of it as something I definitely had to do. I talked about wanting to do it so much that Hai once surprised me with a hot air balloon ride over the Yarra Valley, a well-known wine region in our home state of Victoria. Only fuelling my desire to fly more, I needed no convincing to go up again in Cappadocia.

We had to be ready to depart the Voyager Balloons office at 5:15am. Luckily, everything in Göreme, the town from which the balloon businesses are based, is within a few minute's walk. And they had coffee of all kinds…and baked goods. This was my kind of place.

All checked in, we jumped on a mini-bus to be taken to the launch site. When we arrived, our balloon was almost fully inflated and we were instructed to get in the basket. This was already a big contrast from our first ballooning experience where the balloon was transported with us and on arrival preparations began, meaning that we waited a considerable amount of time before setting off.

Hot air ballooning is a huge industry in Cappadocia. The amazing weather conditions for flying mean they can fly almost every day of the year! This equates to having an incredible amount of flying hours up their belts and their procedures are like a well-oiled machine. 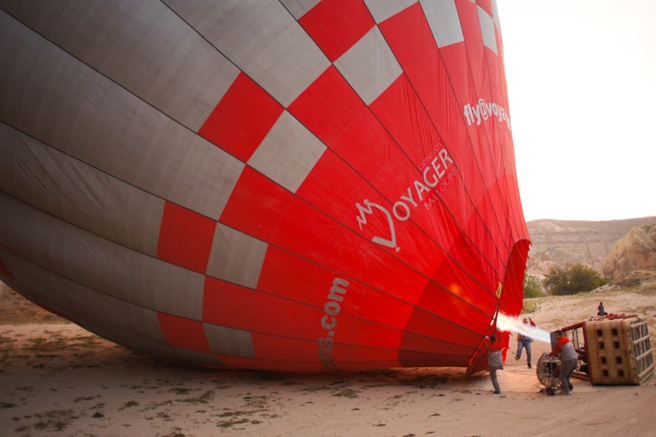 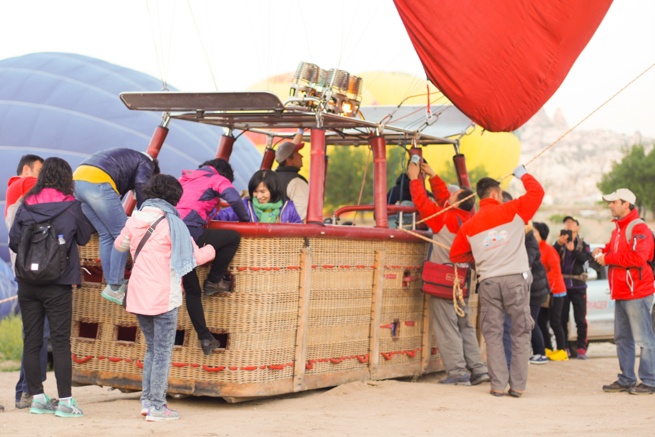 Climbing into the basket. A tip for the ladies: wear pants! :) 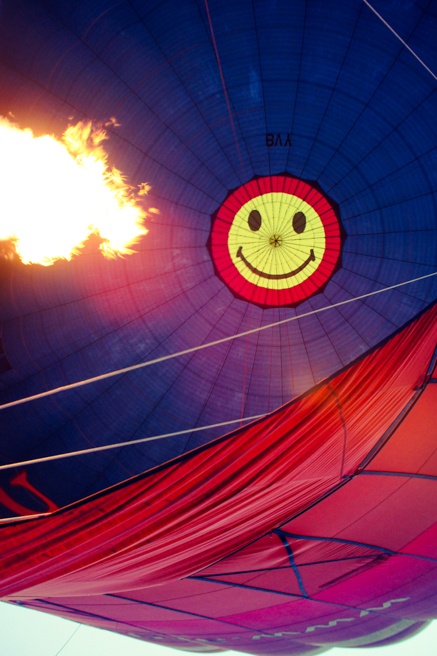 Voyager is the only company to boast a smiley face on its parachute. :)

We didn't even realise when we had lifted off the ground, so smooth was the take-off. Then we were away, being carefully maneuvered through the sky by our pilot, Halis. If you're going to get into a basket that's transporting you at heights, this is the type of guy you want flying it.

Halis set up the second ballooning company in Cappadocia in the 1990s and was/is a pioneer of the industry in the region. He is an incredibly experienced pilot and places a huge priority on safety. It was so interesting (and reassuring to many, I'm sure) to chat with him about all the measures he has put in place to make ballooning even safer, some even adopted by the region's industry as a whole. Although by this time, everyone was so relaxed that even those who had felt jittery about the experience at the office were peering over the side. 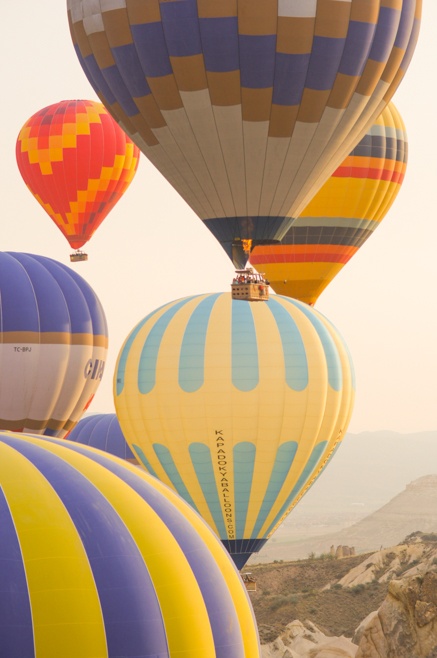 Halis may have been chatting casually the whole time but underlying this is a huge amount of experience in which he is constantly aware and making conscious decisions about the winds to take and where to go. As we approached some large rocks, Halis demonstrated his skills by getting so close that we could basically touch them, and then, at will and with a thorough understanding of flying, he drifted us high above the rock in safety, “Like a Jedi,” he joked.

The Cappadocian landscape is often described as lunar-esque and even like “Mars”, full of magnificent rock formations that are thanks to volcanic eruptions some 30 million years ago! The eruptions left a layer of compressed volcanic ash known as tuff and the process of erosion has been doing its thing ever since, creating a terrain like no other. 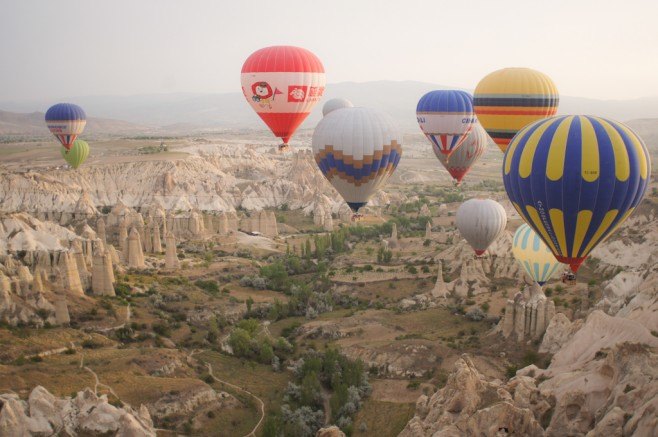 The fairy chimnies are some of the more popular formations, with their mushroom-like caps. Some say they look rather like, um…something else. 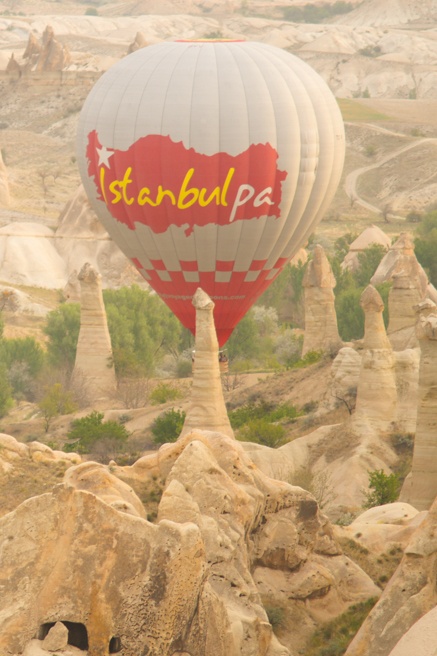 What do you think?

Seeing this unique terrain from above is phenomenal. From going way up high for an 360 degree aerial view to flying way down low through the valleys. 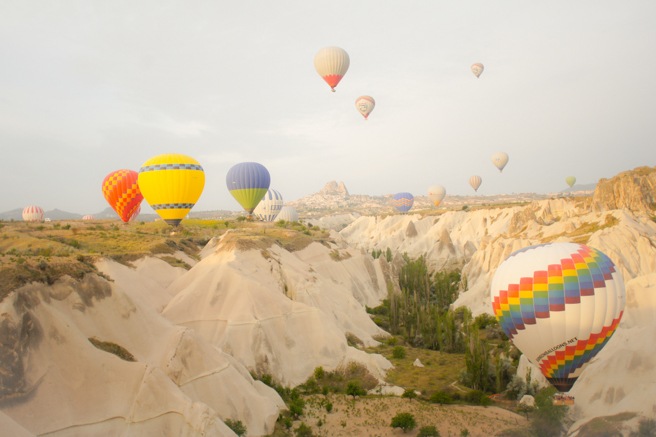 There's the compulsion to document the entire flight with all the varying and breath-taking views presented before you. But make sure you put down the camera at times and take mental images to pop away in your memory bank.

In my opinion, the best reason to go hot air ballooning in Cappadocia isn't the physical landscape, as awesome as it is. It's the fact that there are so many balloons flying at the same time. One hundred in fact! Imagine 99 other hot air balloons all around you, dotting the sky with colour. Where else on earth are there scenes like this on a daily basis? 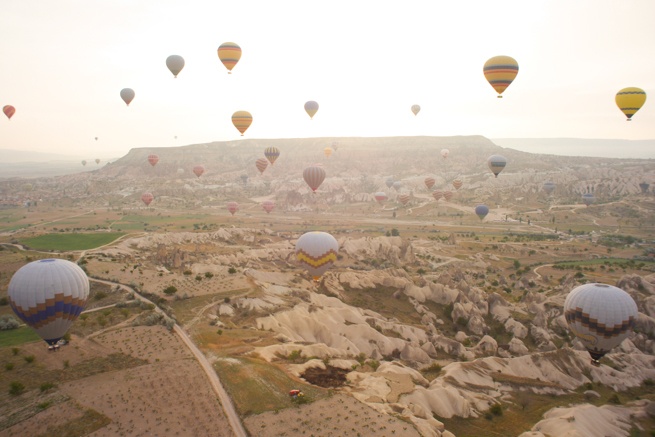 Having taken in the magnificent scenery for an hour, it was time to land. This was perhaps one of my favourite parts. Although part of me wanted a more dramatic landing, ours was memorable for something unexpected. During our first hot air ballooning experience in Australia, we landed sideways and were dragged 50 metres across a paddock in windy conditions. As we approached the landing area in Cappadocia, the crew was already waiting with the truck and trailer. “Are we going to land in the back of the trailer?” I asked. “I can try,” Halis knowingly responded. And then he actually did. Placing us softly and perfectly right in the back. Incredible!

Then of course it was time for champagne and certificates. Drinking bubbly after hot air ballooning isn't just something offered to add luxury to the experience (although it adds a touch of that anyway). This is a tradition dating back to the very first manned hot air balloon flight in France in 1783.

When this strange contraption landed, local farmers raced towards the pilots, Pilâtre de Rozier and François Laurent d'Arlandes, with pitchforks. To appease the farmers for landing in their field and to convince them they were not in fact demons or aliens landing from outer space, they offered them a bottle of champagne which they had brought along to toast their successful flight. Today, every hot air balloon ride concludes in the same way, hopefully minus the angry farmers and pitchforks. ;) 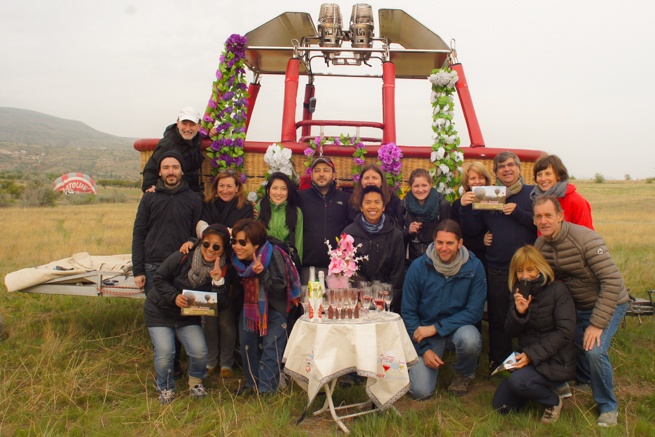 By 7:30am we were back at our hotel, being offered breakfast by the owner. Not that we needed a second one, but I guess a nap can wait a little while longer. Still on a high.

We wish to thank M. Halis Aydogan and Voyager Balloons for hosting our hot air balloon ride and hospitality in allowing us to join the crew. As always, we're keeping it real and tell it like it is.

Fantastic Balloon Rides Around the World - Misadventures with Andi

[…] There’s the compulsion to document the entire flight with all the varying and breath-taking views presented before you. But do make sure you put down the camera at times and take mental images to pop away in your memory bank. This is an experience you’ll want to remember for the ages. […]

So jealous! This is really high up on my bucket list and I owe it to the travel blogging world that I even know about it as I didn't before I started seeing it on blogs! Must have been wonderful!

Spectacular! This is a bucket list item for me for sure! And it's very reassuring to hear your landing was so smooth :-)

Yes, certainly nothing to worry about! :)

What a magical experience! That landing was awesome, and sounds quite different from the sideways experience you had previously.

Loved the video. The flight was exactly how I imagined it would be through your words and pix...peaceful, whimsical, and breathtaking. Love it!

Thanks Britt! It really was a wonderful experience and so glad that we could share it through words, images and video. :)

We were very lucky indeed Charlie! You'll have to get there to experience it for yourself one day! :)