The Japanese seem to be taking Christmas to a whole new level every year. Of course, being a non-traditional holiday, adopting celebratory practices from other cultures is somewhat of a given. One of the most trending adoptions of the past couple of years is German Christmas markets, where the Japanese trade grilled fish for bratwurst and hot sake for mulled wine.

Like most things “foreign” in Japan, expect to pay more for your market fare, but unlike a lot of foreign cuisine in the country we'd label it as reasonably authentic. At the very least it seems to be the general consensus that the Glühwein recipe has not been lost in translation. You can trust us; we made a point of visiting almost all the major Christmas markets in Germany on our last visit.

So if you feel like joining the Japanese in their European take on the season, or perhaps just taking a night off Japanese cuisine for some foreign fare, here are five German Christmas markets in Tokyo where you can get your glow on this holiday season. Prost!

Located next to the most recent attraction to hit the Tokyo skyline, this German Christmas market by Tokyo Skytree, said to be bigger than last year's, is sure to get a lot of foot traffic this season. The wooden stalls selling holiday trinkets, Glühwein and stollen certainly give a homely vibe amongst the downtown city-scape.

Combine your visit with a look at the twinkly illuminations on the pathways connecting the Skytree's Soramachi Mall 4th floor Sky Arena and Tokyo Skytree and Oshiage Stations. Visitors can enjoy an 8-minute projection mapping show involving a 340m large screen every 30 minutes from 5:30pm (last show 8pm), while Tokyo Skytree itself will also be lit up in festive colors from 5:30-10pm (alternating between green and red each day).

Replacing the usual farmers' markets that take place at Yebisu Garden Place's Clock Plaza throughout the year, this Christmas market will offer the usual European favorites.

Check out the beautiful Christmas tree by the stalls and head into the shopping complex for a look at the illuminations display, including the impressive 5m x 3m Baccarat chandelier.

Minato Mirai is a popular date spot anytime of year with its ferris wheel and waterside promenades, but this German Christmas market at the ever-evolving Red Brick Warehouse space in Yokohama gives one an extra incentive to brave the chilly evenings.

Apart from stalls with good bratwurst and even better Glühwein, there are also a bunch of special events, including the chance for the kids to meet Santa on December 14th, 18th, 20th and 21st.

For even more winter holiday fun, head to the adjacent ‘Art Rink‘, an open-air ice skating rink on until February 17th, 2019.

Research in progress: Sampling all the Glühwein in Germany.

A small market area set-up within the Roppongi Hills shopping center, this one perhaps feels a little more manufactured than the outdoor markets. But rest assured, if a German bier, sausage, mug of mulled wine or a snow globe is what you're after, you can find them here. Goods on offer include Christmas decorations imported from Germany and advent calendars.

If you're looking for a Christmas tree or plants to add a bit of festive cheer to your Tokyo apartment, the Fir Tree Shop on Hillside (4-8pm), located on the first floor of Roppongi Hills, has miniature sized ones starting at 1,500 yen, along with wreaths and other decorative items.

While the market on its own is probably not worth a special trip, if you combine it with a visit to the Keyakizaka Illuminations display within the same complex and the Tokyo Midtown illuminations, you've got yourself a very nice winter holiday outing.

Time: 11am-9pm (until 10pm on Fridays, Saturdays and Christmas Eve).

Of all the German-style Christmas markets of the season, this installation at Hibiya Park is perhaps the one we are most looking forward to. Along with the usual German fare, expect a 14m tall traditional ‘Christmas Pyramid' imported straight from Seiffen, Germany's renowned Christmas craft town with a history of woodcrafts dating back to the late 1800s. What's more, this event has the official backing of the German Tourism Association and the German Embassy! 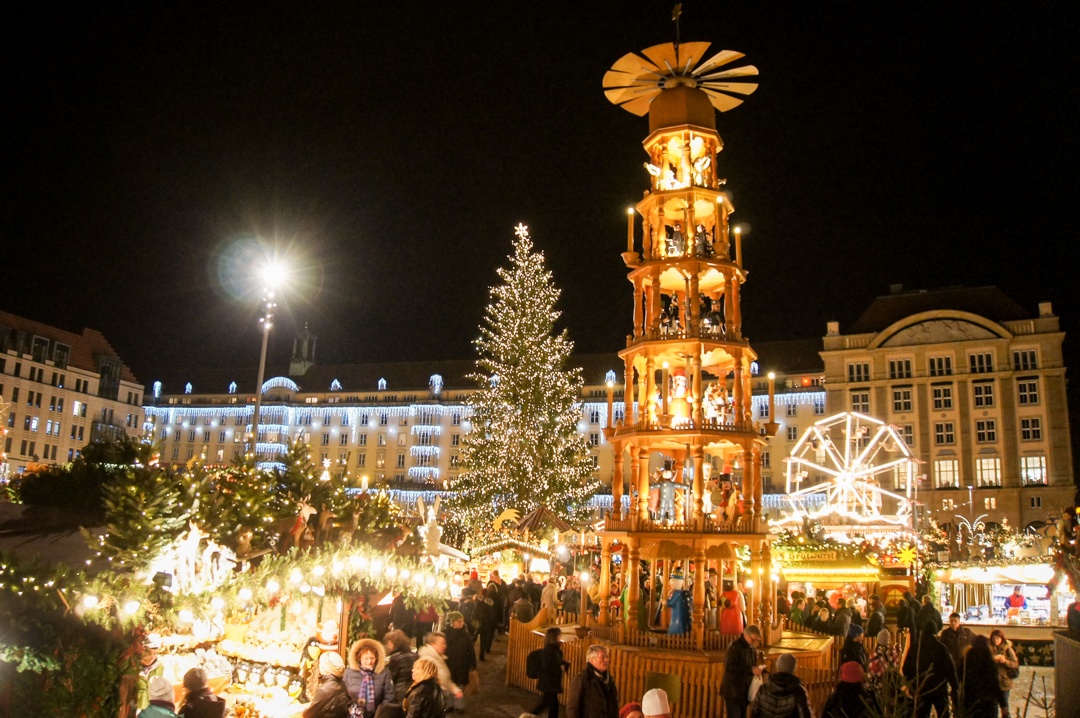 Here's a photo we took of the Guinness World Record Christmas Pyramid at Dresden's Striezelmarkt. Expect to see a similar one at the Tokyo Christmas market in Hibiya.

Are you interested in visiting any of the German Christmas markets in Tokyo? Have you been to any? Let us know what you think in the comments.

Other winter events in Tokyo

Setagaya Boroichi – a 400-year-old flea market in Tokyo! (held on select dates in December and January)

Tokyo's TOP Places to Go at CHRISTMAS 2019 | Otaku in Tokyo

[…] the lead-up to Christmas, Tokyo is host to numerous “winter illuminations” that take holiday lights to a whole new level. […]

Where to see Christmas lights in Tokyo

[…] While at Roppongi Hills, you may also like to check out the decorations at Mohri Garden, the tree in 66 Plaza, the paid ‘Sky Christmas' at Tokyo City View, and the German-style Christmas Market (although in our opinion the latter is small, over-priced and more manufactured than the city's other German Christmas Markets). Read more about top spots for Christmas markets in Tokyo. […]