Last weekend we celebrated our 7th wedding anniversary. We spent it at a ryokan by Misaki Port just a bridge away from Jōgashima, an interesting island that's day-trippable from Tokyo, and we thought it would be the perfect time to tell you more about the ryokan experience.

First off, for those who are new to the term, a ryokan is a traditional Japanese-style inn. It's often cited on lists of things to see and do in the country but it is all too often skipped by travellers on account of the hefty price tag. It certainly isn't cheap, with most double rooms averaging about ¥25,000-30,000 ($250-300) a night. But here's why it's worth the splurge.

1. Stay in a traditional Japanese-style room

There is something beautifully simplistic about a Japanese room. We're talking tatami flooring, sliding shōji screens and low wooden tables with floor cushions. If you want that ‘I'm in Japan' feeling from your accommodation, a ryokan will most definitely do the trick. 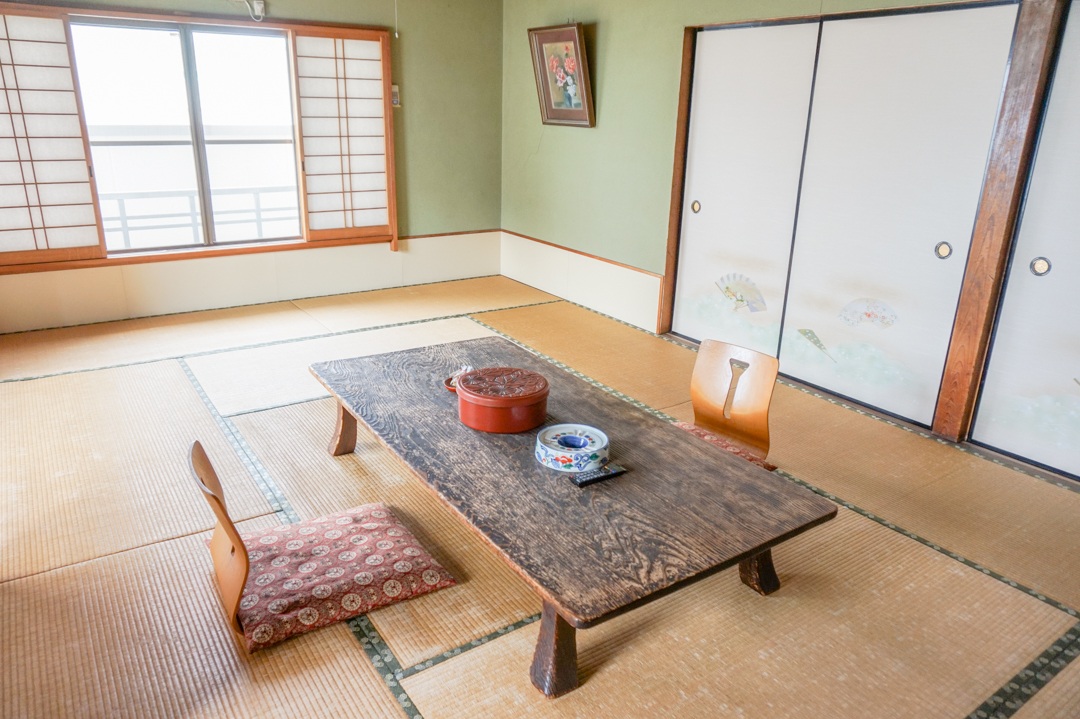 From the moment you set foot in a ryokan, you'll get a sense of the supremely high regard the Japanese place on hospitality and service. Once you've been taken to your room, expect to be welcomed with green tea, prepared by a staff member whose task it is to make sure that you've settled in and that everything is to your satisfaction. 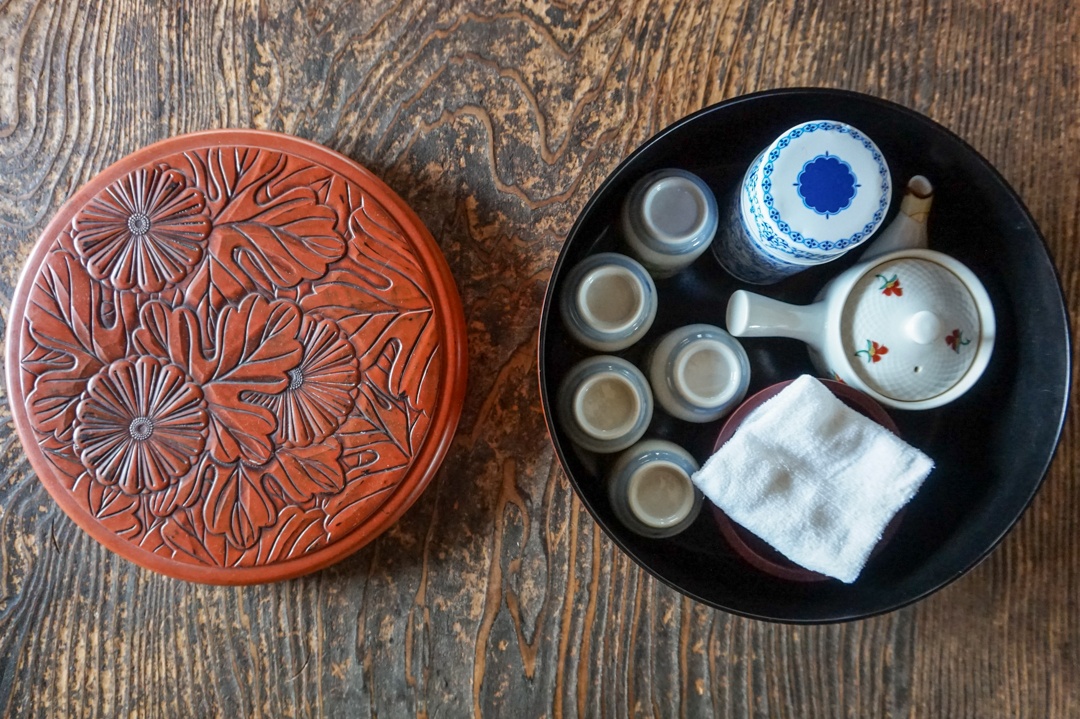 Every detail is considered important. Our private dining room was up a steep set of stairs and the staff member bowed and apologised profusely that one piece of okra had moved from its original position on the plate while she was carrying it up in full kimono! This, one might say, “over-the-top” service (that's borderline uncomfortable at times) really has be experienced to be believed.

You can usually choose whether you want meals (dinner and breakfast) included with your room. Skipping meals obviously brings the cost down, but here's why you should just go all out and get the full ryokan experience.

A meal at a ryokan isn't just any old grub, prepare yourself for a full-on culinary journey. Traditional Japanese cuisine, called washoku, was given UNESCO World Intangible Cultural Heritage status in 2013 for its intricate understanding and appreciation of seasonal produce, supreme balance and role in social cohesion. And it's exactly this kind of elaborate dining that awaits you at a ryokan. 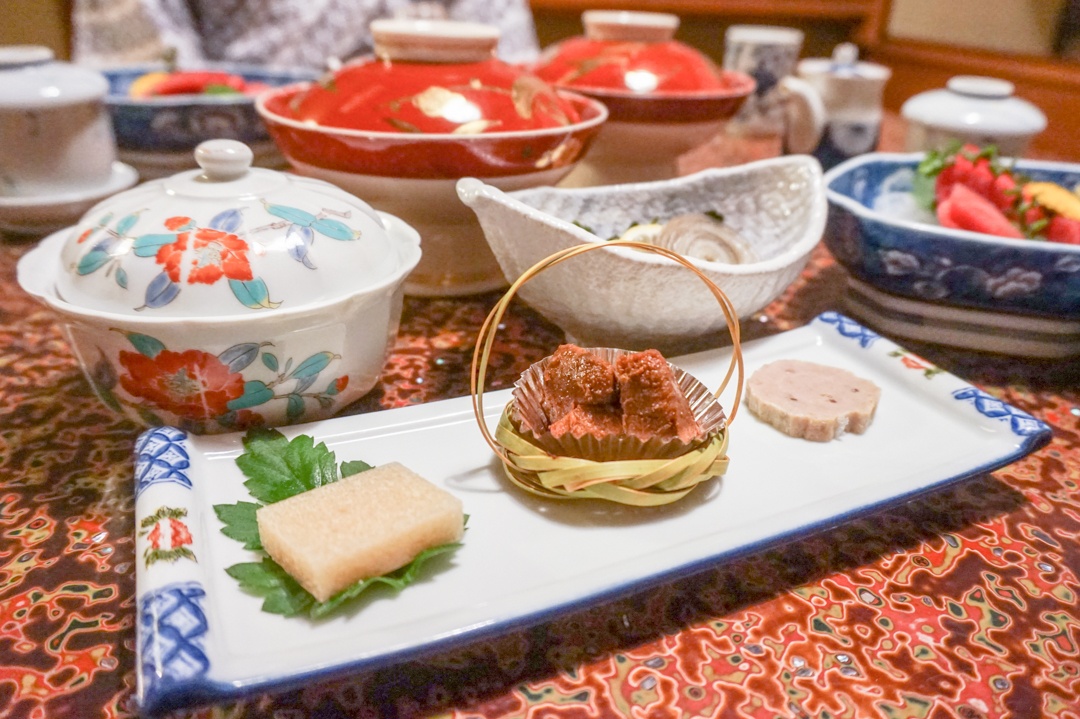 And even more plates were brought out after that!

Expect a myriad of small dishes, delicately and intentionally arranged to achieve perfect harmony. Don't be fooled by the small plates, that's an insane amount of food right there. I challenge you to get through it all!

And, get this. While you're out enjoying your gazillion course dinner, a staff member will go to your room and set up your futons. So once you're fully food comatose, all you have to do is roll into bed! 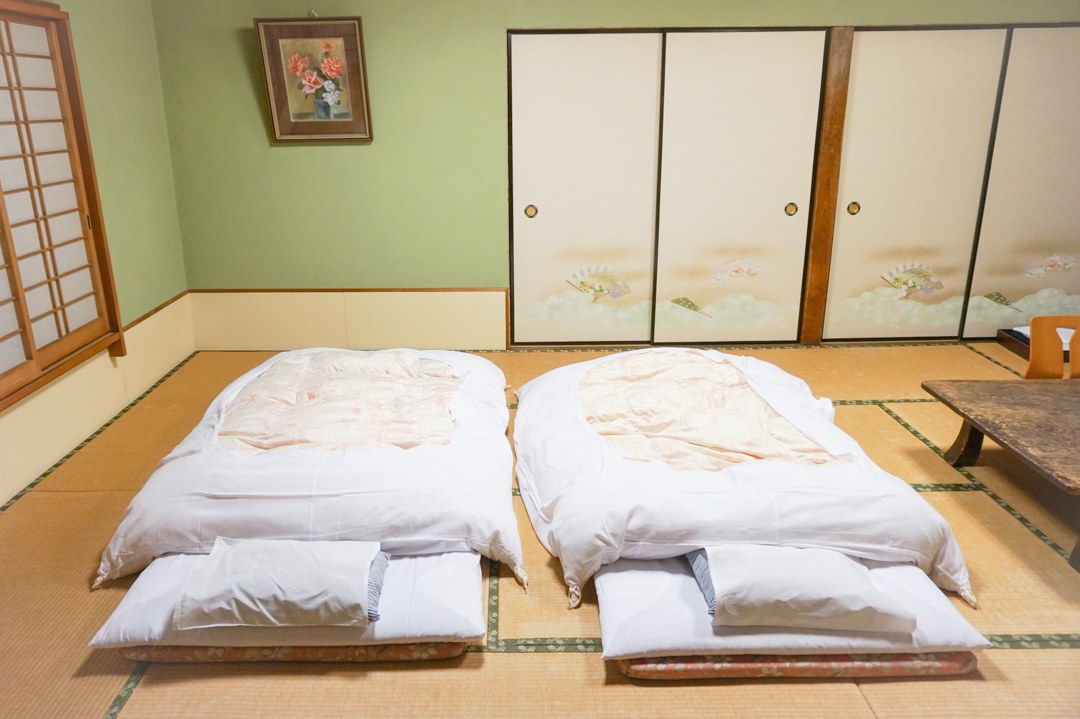 The staff will even come and pack up all the bedding while you're having breakfast! 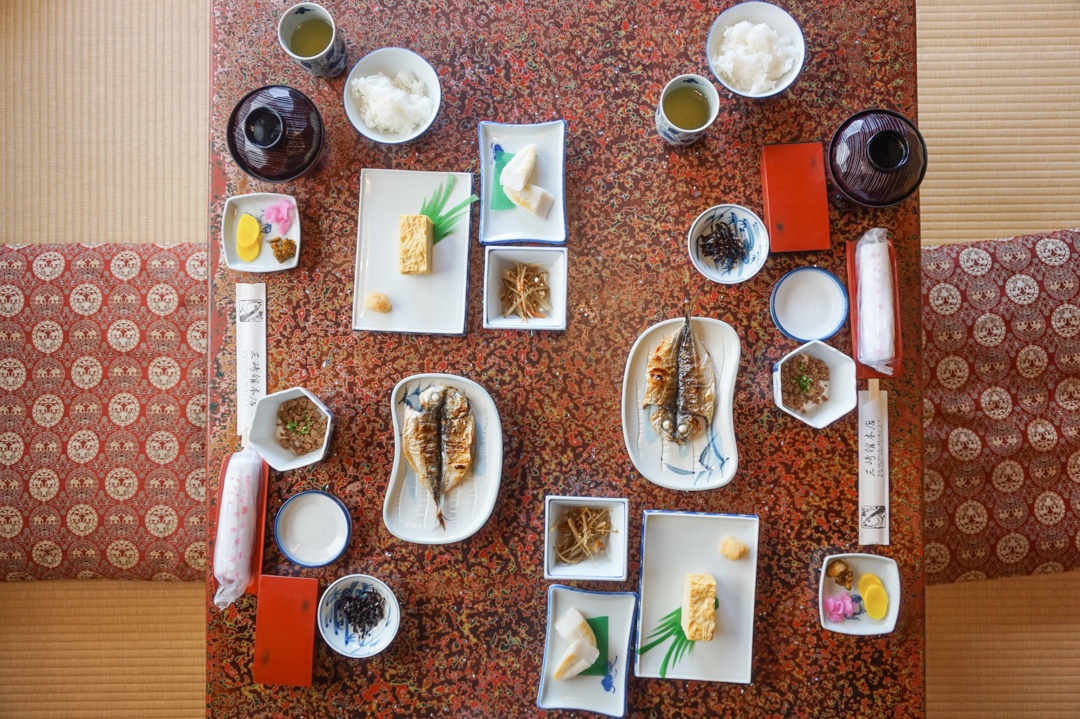 Probably another thing on your list, am I right? Ryokan include traditional bathing facilities that, as guests, you can use for no additional charge. Japanese baths (whether onsen or sento) are a unique cultural experience that give visitors a direct window into this beloved Japanese tradition.

And despite tattoos generally not being allowed in Japanese bath houses, we have had several tattooed readers tell us they haven't had issues using the bathing facilities as guests at ryokan. So while we can't speak for the policies of each individual establishment, it seems that there may be more flexibility when you are a paying guest of a ryokan. Some ryokan also have time-share private baths that you just need to book a time slot for, or, if you have the budget, you can book a room with your very own private bath.

Click here for more information on Japanese baths and how to use them.

Ryokan supply yukata (a basic cotton kimono) that you can wear after your bath, to dinner or simply as you explore the accommodation. They are extremely comfortable and add to the traditional atmosphere.

Try sitting seiza style like this while enjoying some tea in your room or during meals. Not gonna lie, we can't hold it for a full meal – your legs will go numb! But with some secret stretches under the table when the staff leave (shhhh), it's fun to dine like this once in a while. 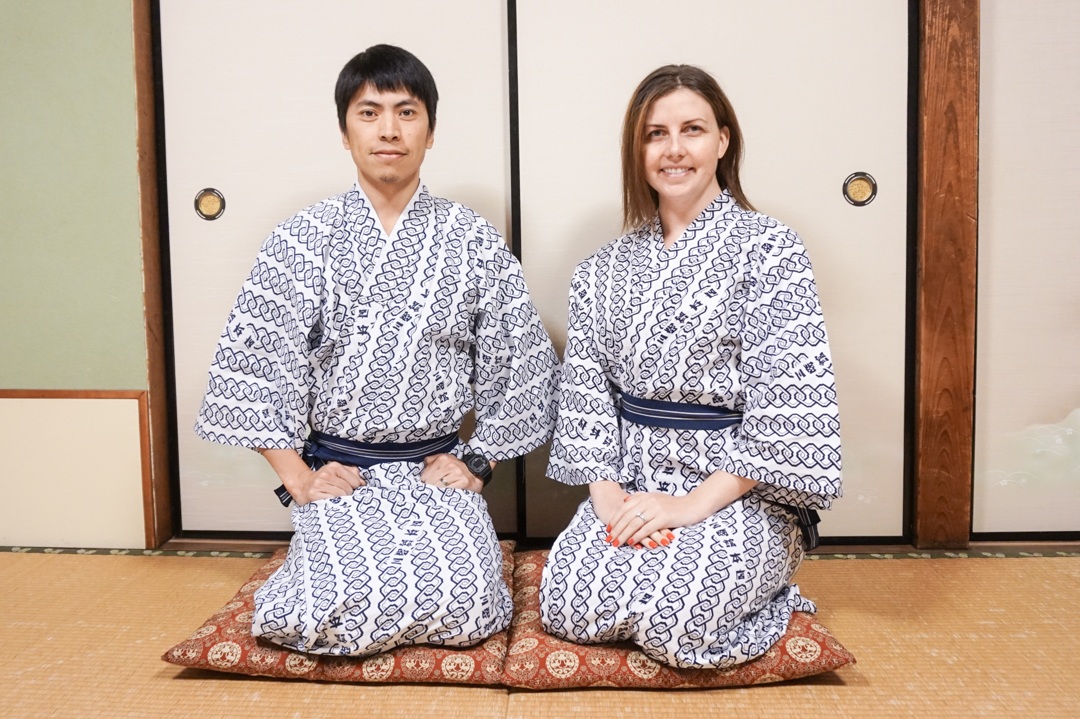 Considering that you can check so many things off your Japan bucket list at a ryokan and for the insane amount of top quality food you get, the high price tag isn't that crazy after all. So save your pennies and factor a night at a ryokan into your Japan travel budget. It will probably be one of the highlights of your trip.

Have you ever stayed at a ryokan? What was your experience like? Is a ryokan on your Japan bucket list?

[…] Jessica Korteman and Hai Huynh of Notes of Nomads are seasoned travellers who don’t usually spend a lot on accommodation; preferring instead […]

Hello, wanted to stay at a Ryokan hotel with my husband and 2 kids (age 6 & 9). Would like exactly what you experience here with traditional Japanese style room, the tatami mats and washoku meal and being able to explore the accommodation in yukata. My questions are will the room fit the whole family? Are kids that age allow to enter the baths? Or should I book a room with private baths instead? Which Ryokan did you stay and can recommend that are kid friendly (maybe in Toyko or Kyoto area)? Thank you Jessica.

Basically all ryokan are what you describe, so you can really take your pick! Rooms are generally very spacious and can easily fit a whole family (many Japanese families stay at ryokan with kids). Just say you are traveling with two kids when booking (as they'll need to know for dining/bedding arrangements).

Kids are definitely welcome in the baths, so there is no need to book a private onsen (unless you want to). Kids are expected to follow the same rules as adults in the baths, so you might just need to talk them through what I imagine would be a new process for them. I took my 9-year-old niece who was visiting from Australia to one last year and just explained the rules as we went along. Although she was a little shocked that everyone was naked, she really enjoyed learning something new and even asked to go again the next day!

Kusatsu Onsen: One of the Best Hot Springs in Japan

[…] of the Yubatake. They aren’t cheap but if you haven’t read our post on ryokan yet, take a look here for why we recommend staying in one at least once during your trip to […]

Hi! My husband and I are going to be in Japan for about 2 weeks. We were wondering if there are any Ryokans that you would recommend? Thank you so much! Also, your blog has been extremely helpful with planning our trip!

Hi Pallavi, so glad to hear that! I hope this message doesn't come too late. Where are you heading in Japan?

[…] Five reasons to stay in a ryokan in Japan – Jessica Korteman […]