Part Seven of my account of working as a volunteer in Ishinomaki, a town hard-hit by the earthquake/tsunami of March 11th 2011, as part of clean-up and recovery efforts. 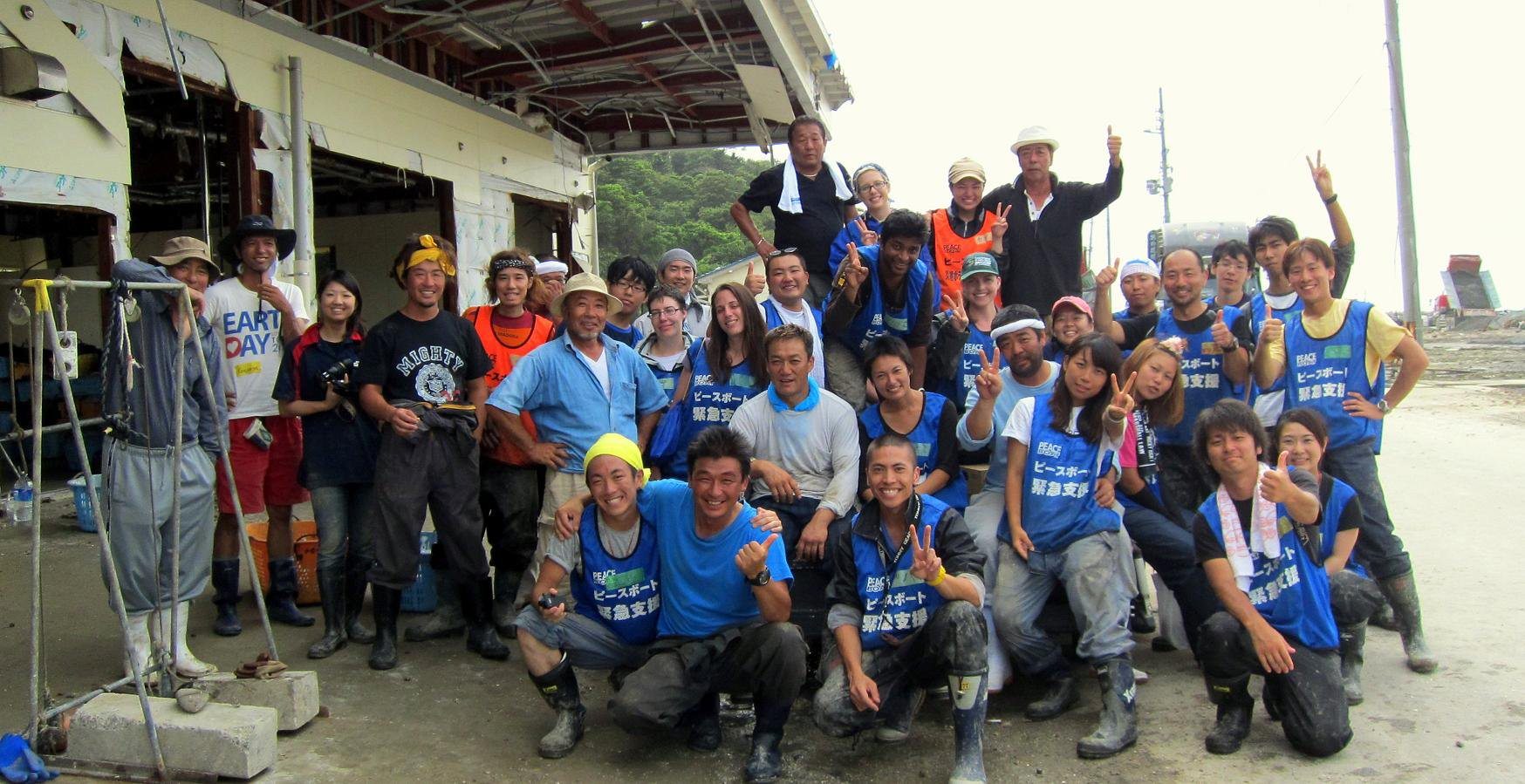 8/5 – New gloves! My first pair of rubber gloves had barely held up yesterday, having been ripped apart by the sharp scallop shells over several days’ work. Luckily I had been wearing double gloves: leather on the inside and rubber on the outside so avoided injury.

Today I went out one last time to hang oysters in the bay, and then spent the rest of the day in the oyster assembly line bantering with the local fishermen. The place we were using to rope the oysters used to be a storage warehouse, one of the fishermen pointed to the place where their working place used to be, now a barren patch of earth a short distance away.

Actually being able to farm oysters over the next few years was one thing, but being able to sell them at the end of it all was another. One of the fishermen drew a map on the ground with a stick. “Here we are now”, he pointed. “Here is Fukushima Daiichi nuclear power plant, about one hour away to the north. And to the south, here is another nuclear power plant”. He paused. “Oysters from this area are some of the best in Japan but let’s hope we can convince others of that when the time comes”.

It was a really emotional goodbye to the fishermen who we had grown so close to over the past week. It was not only our last day there but the last day for Peace Boat. The industry in this bay had been kick-started and there are other areas in need. The fishermen were really appreciative of all the help they had received, just as we were so appreciative, humbled and honored that they allowed us so warmly into their working and often their personal lives. The hesitation to actually get on the bus and go was indicative on both sides, all of us prolonging the goodbye and calling out for just one last speech or photo.

They bought us all drinks which we enjoyed together as we went around saying goodbye. They even sent us back with a slab of coffee cans for the trip home. This was on top of the “aisu” (ice cream) they bought us as a mid-morning snack most days. One of the fishermen never got tired of having the same conversation with me during those breaks. He would always call me over and say “Aisu, aisu…oishii yo” (Ice cream, ice cream…it’s delicious). After taking one from the bag and thanking him, he would always compliment me on my choice and ask “Do you have aisu in Australia?” “Yes,” I replied. “But not as good as the aisu in Japan”, I continued. He smiled. “In Japan we have so many types!” “Yes, and all so delicious”, I said. “Yes”, he confirmed. “Do you eat koalas in Australia?” “No”, I replied. Cheekily he’d always say, “Koara o tabetai!” (I want to eat a koala!)

There was barely a dry eye on the bus as we pulled away, we continued to wave even as the fishermen became barely visible in the distance.