Part Six of my account of working as a volunteer in Ishinomaki, a town hard-hit by the earthquake/tsunami of March 11th 2011, as part of clean-up and recovery efforts. 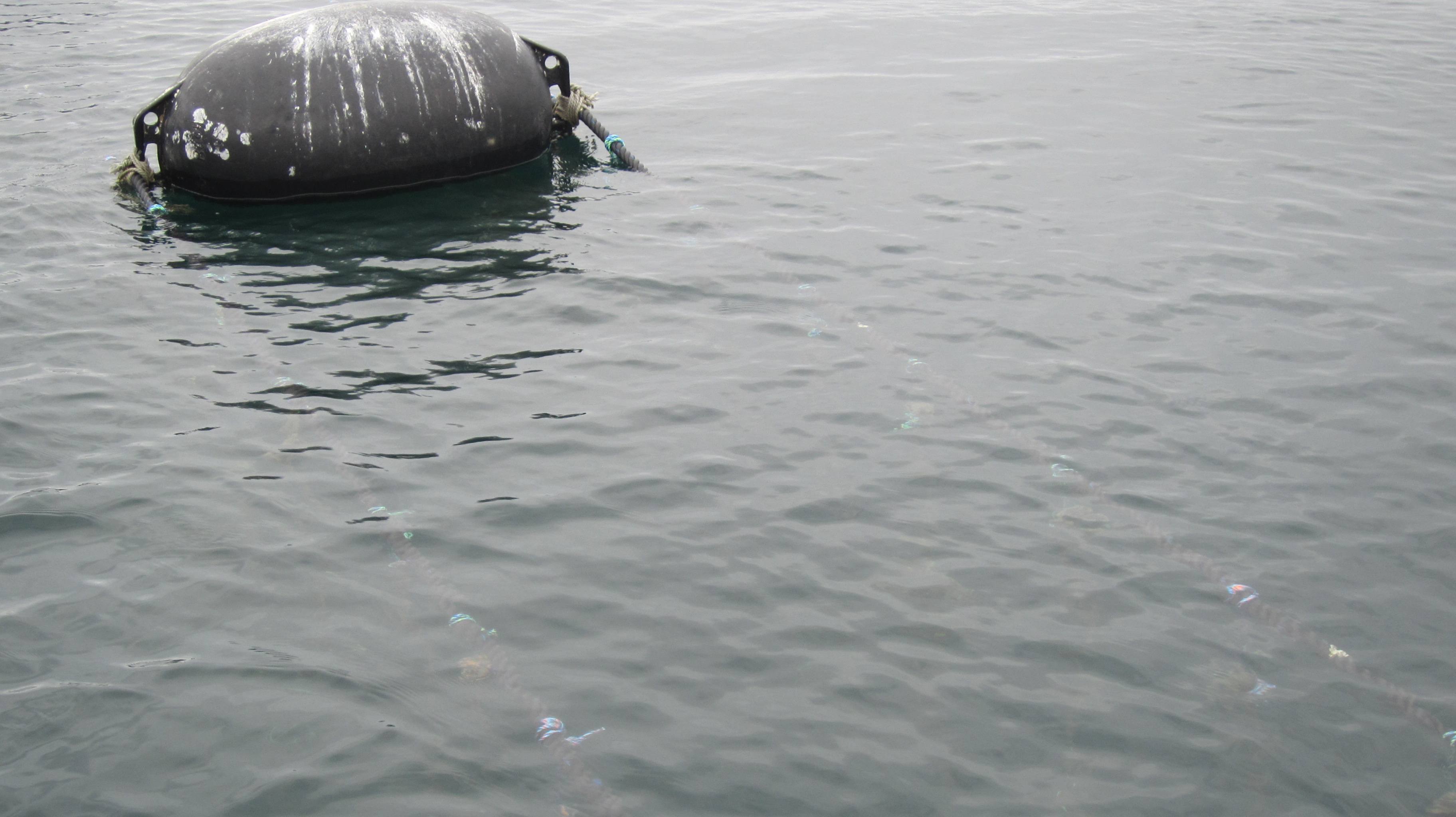 8/4 – Today I started off in the oyster assembly line, working to wedge those shells we found yesterday between the two intertwined ropes. It wasn’t long though, with the ropes that had already been completed by other volunteers yesterday, that we again had enough to head out into the bay for another round of oyster lowering.

Today one of the fishermen I had become close to, Yasa-chan*, taught me a new skill: how to tie the knots to secure these ropes, heavy with their shells and infant oysters, to the two parallel ropes submerged below the surface between each buoy. I practiced with scrap pieces of rope on the boat. Tying and untying, showing Yasa-chan for approval, untying, retying…He laughed and shook his head at how seriously I was taking mastering this new skill, but in a warm and proud way, and almost in disbelief that we were there just for them.

I was now ready to try on the actual oyster lines. I was passed a rope already lowered straight down to the depths below with the weight of a gravel-filled bag at the end to keep it precisely that way, untangled with the other ropes around it. I grabbed it, tied it to the rope already in the water and showed it to Yasa-chan to check its durability for the two-year task ahead. With his approval, I let the rope fall through my fingers to be caught by the knot I’d just made. After several ropes, satisfied that these knots were sturdy enough to keep the ropes and more importantly the oysters they were holding secure, I was left unsupervised. The occasional call of “dame!” (don’t!) as I let another rope go was always met by laughter from the fishermen as they watched my subsequent scramble to catch it. To my relief the knot held every time, and even though part of me knew they were just joking around, I didn’t want to chance it. Their warm and jovial attitude made me smile, testimony to the unwavering strength of spirit that was keeping this town alive.

Today was the first warmish day we’d had. It was especially warm in the full rain suit, not so much about keeping the water off as we were dripping with sweat anyway, but more to protect our skin from cuts from the razor-sharp scallop shells. The skilled fishermen however seemed to get by with rubber gloves and a t-shirt with sleeves rolled up to resemble more of a tank top.

Yasa-chan’s two daughters joined us today, playing in the water off the side of the boat while we continued to secure the oyster ropes. I wondered how they felt, surrounded by that water that swallowed their mother and brother only months ago.

I’ve never been the best at hands-on tasks and with risk of sounding ridiculous, I felt really satisfied that I was able to participate in their work without being a liability or slowing them down. It felt good to feel useful. By the end of the day, we were lowering oysters faster than ever. A good day’s work.