Part Five of my account of working as a volunteer in Ishinomaki, a town hard-hit by the earthquake/tsunami of March 11th 2011, as part of clean-up and recovery efforts.

8/3 – A dreary and rainy day. While the others continued to work on the oyster ropes at our usual spot, a few of us were dropped off at another area of Kobuchi-hama to meet the fishermen. After about 20 minutes, a couple of boats pulled up to the shore. We quickly hopped aboard and set off to search for oysters that had been lowered into the bay before the tsunami. Not like the ones we tied yesterday, they had all been lost, but let me take you back a few steps before the oysters get put into those two intertwined ropes.

Scallop shells are left as a by-product of the scallop industry. Once farmed and the meat shipped to restaurants, these empty open shells are then sold to oyster farmers who use them to cultivate oysters. The fishermen string the shells on wire and then lower them into the bay so that the naturally occurring larvae in the water can attach themselves to the shells. The scallop shells provide an ideal base for oyster cultivation, the closely-strung shells in protected bay areas making an excellent hiding spot for larvae to attach.

Once this process has occurred, the strings of shells are taken out of the bay, the wires cut and then the individual shells dotted with oyster larvae are positioned in the intertwined ropes to be placed out into the bay a second time, this time for a two-year duration. With work on the oyster ropes going at a fast pace, we had almost run out of shells and it was time to salvage what we could from the bay in one last ditch effort to get the best out of this year’s oyster season. All the fishermen were working together this year. Not everyone still had a boat after the tsunami and saving this coastal town’s fishing industry had become a combined effort.

The two boats went out searching in different areas. Our boat stopped some way out in the bay. Another fisherman was there and helped guide us above the shell beds with the help of a long stick. His small vessel was also empty. We found a spot with quite a few strings below, the fishermen yanking them up to the surface with their long hooked sticks. We were told today’s job would be difficult. Apparently the fishermen had called earlier to ask how many women were coming along as they were concerned about the strength required. I guess us four girls over the two boats had shown we were competent enough to get the job done during yesterday’s outing.

You can imagine piles of shells that had cemented themselves together over many months, to the metal bar they were resting on and to the other strings around it. Breaking that apart was no straight-forward task. Each time the fishermen brought one up though, they released it and let it fall to the bottom. After some time, they turned to us and said that these shells were now useless. They usually remove the strings from the bay between March and April which was obviously not possible this year. The larvae had developed too much in the tightly-packed strings, now deformed in the small space and unsuitable for the next stage of cultivation. They continued to pull up more strings, hopeful that some could be spared. I really felt for them, seeing the hope drain from their faces, already emotionally attached to this community of fishermen and their stories. This place, these oyster beds, was where they found many bodies, their family, friends…and now these waters had taken their livelihood too. In defeat, we went to search new waters.

We spent hours on the boat, the rain got heavier. One of the fishermen asked if I was cold, if I wanted some cover. To be honest I couldn’t feel anything, oblivious to the greying skies, just intent on finding something, anything. It wasn’t until later that I realized how wet my face and hair was. The fishermen pointed out things along the way, how they fitted in with the tsunami story. A rock named “Dog Island” because its shape resembled one. Its head knocked off with the force of the wave. At one point, one of the fisherman who was leaning against an empty palette said, “I’m sorry. I’m sorry”. I looked up at him, puzzled as to why he was apologizing. “You came here to do something today but there’s just nothing left”. “Don’t be sorry”, I said. “We only wish that we could have found something for you”.

We started back towards our usual Kobuchi-hama working station. Time had gotten away from us. At a point, the boat almost abruptly slowed down and one of the fishermen asked, “Do you mind if we try one last place?” “Of course not”, we mutually agreed without even a second needed to think about it. We changed course a little, meeting up with the other boat along the way and we were now proceeding almost side-by-side to our last resort.

Sitting on the edge of the boat with our waterproof hooded jackets pulled over our heads to shield from the rain, a small inlet came closer into view. We almost all stood simultaneously to put our hands up above our eyes to test our vision. On this tiny patch of shore, there were strings of scallop shells, a sizeable amount too. I smiled but quickly hid my emotion conscious of the fact that they could be just as unsuitable as the last. As soon as the boat touched some sand and before the boat had come to a complete stop, a couple of the fishermen jumped off and inspected them. After prodding through a few of the strings, “They’re good”, they yelled. “They’re good!”

In almost an insane kind of way we frantically jumped off too, like in the movies when someone has been lost in the desert and they think they see water. They question if it is a mirage. Then upon placing the liquid to their lips, realize they have struck gold and that survival is now a plausible option. This may sound totally dramatic and not a matter of life and death, but that moment when everyone realized that all these shells could be saved and surging into action cannot be described as anything else but a fantastical dream.

We worked hurriedly, as if at any moment this mirage might disappear. We ran back and forth, grabbing what we could from the shore and piling them onto the palettes on the boats with occasional relieved laughter. Within a matter of minutes, we had gone from absolutely nothing to exactly two boat’s worth full of shells, almost as if it was meant to be. The mood changed to one of satisfaction. While this year’s yield would undoubtedly be significantly lower than usual, we had come back with the morale boost that everyone needed.

You might be wondering why these shells were not in the same overgrown state as the others. At some point after the tsunami, these shells were pulled from the bay bed and placed on the shore. Not being constantly submerged in water meant that the larvae didn’t continue to develop as they would under usual conditions. The daily tide washing up over them was enough to keep them alive. In short, the move had saved them.

We were dropped off not so far away, a hill between us and where we usually work. Some of the fishermen stayed on the boat to bring it around to the other side of the bay, while we all jumped in the back of a pick-up truck to meet up with the other volunteers.

It was good timing. The others had finished placing all the remaining scallop shells into the ropes and had even started collecting more ropes from surrounding tsunami rubble, and were now breaking for lunch. After lunch we could get straight into preparing those shells we had just collected, cutting the wires and sliding the shells off into baskets. With the baskets prepared and stacked for tomorrow, the encroaching tide was our cue to call it a day. As the mini-bus pulled away, today’s Captain waved us off from a temporary house. 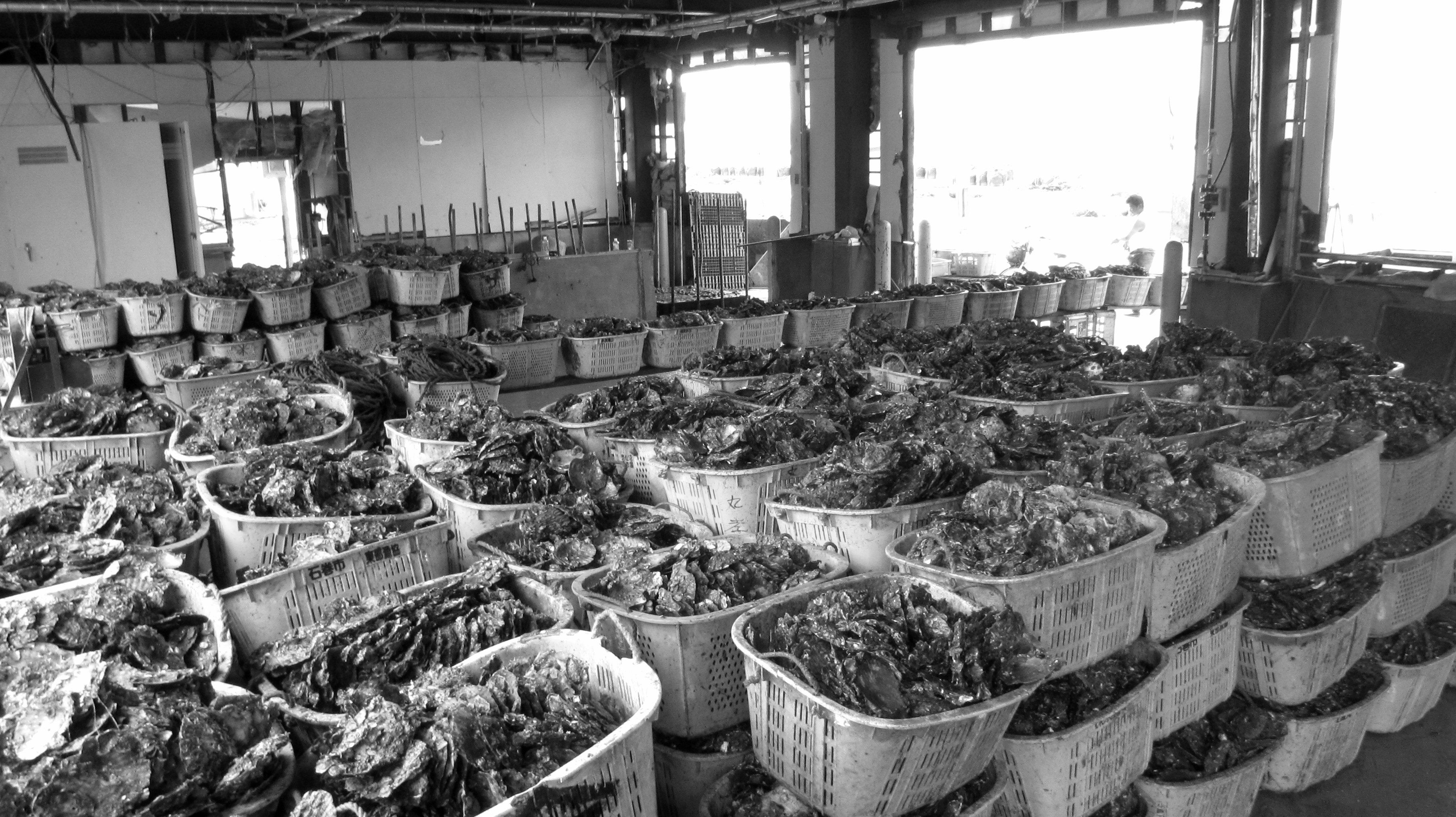