Part Eleven of my volunteering accounts in Ishinomaki, a town hard-hit by the earthquake/tsunami of March 11th 2011.

The next morning we emerged early from our tents to join Peace Boat volunteers for the day. After the usual radio taiso (morning exercises/calisthenics) and singing to wake us up for the day’s work, we received our assignment. Today we would be going to Onosaki, a town so devastated by the tsunami that the roads had been completely washed away. Access to the town had only been re-established six weeks earlier by way of a makeshift gravel road that had taken months in the making. Because the town had been completely cut off, it remained as it was the day the tsunami hit.

The rest of the volunteers went by bus, while we slowly followed along the dusty path by car, often having to pull aside to allow vehicles traveling in the opposite direction to pass. It was the most devastated area I have seen to date. The town had been obliterated. We passed by the elementary school, now a shrine to the 67 children who died there. I shook my head in disbelief as we continued through this terrible dream-like scene. The road was surrounded by water. Water reaching so far off into the distance that I thought it was a bay leading out into the open ocean. But this water never used to be here.  This was tsunami water that just never receded or only partly so. Submerged beneath this newly formed lake was a densely populated residential area and all its memories.

Upon arriving at the site of today’s work, we were split into two teams, working on two different houses at opposite ends of the street. There was debris everywhere. We were given instructions on how to separate the materials: work together to remove the biggest pieces first and then categorize into central piles of wood, metals, plastics, electronics and personal effects. Anything that may be precious to the owner of this house or their family would be cleaned and taken to a center where they could be collected. We could move around as we deemed the safest but we shouldn’t touch the blue sheet behind the pile of rubble because it was covering a dead cow and we shouldn’t walk close to the precariously lop-sided frame of part of a gutted house to the side that looked as if it could topple with even the smallest aftershock.

We got to work, assessing the best way to free things. It truly was like a big puzzle. The beams of the house had completely fallen with electrical wires still attached at points, which then in the surge of water had become completely wrapped around and tangled with other items. We had to follow the cords, cutting them with a pocket knife as we went along to free each beam one by one, allowing us access to the debris lying beneath it. Nails and brackets of all kinds were jutting out of the pieces of wood and metal sheeting. At one point I looked down, as I wondered why one of my boots felt so heavy and uncomfortable, to find a plank of wood attached to my rubber boots courtesy of a nail I must of stepped on as I scoured over the collapsed house. Luckily, it only made its way into the rubber sole and not my foot. It started to drizzle lightly but we had waterproof jackets and pants and were so focused on the task at hand that a little rain was not going to bother us.

For the new volunteers this was their first time in the field. One of them nervously asked me about the smell. To be honest I couldn’t smell anything. Perhaps I had gotten used to it. “It’s probably the cow”, I said. “Do you think there could be a body?” she asked. There certainly was a possibility but none of us had any idea what we might find so I found it pointless to worry her or others. “This stuff has been here for 5 months now”, I said. “It’s bound to smell”. A couple of the guys tried to lift the refrigerator that was face down on the ground. As they lifted it, all the doors swung open, and shelves and drawers of spoiled food and bugs came tumbling out of it. Now that I could smell. A look of relief came across the girl’s face. What she had been smelling must have been that.

I had tried, as best as one can, to mentally prepare myself for finding a body. This area had been basically untouched since March 11. No rubble had been moved. We were the first to touch this house. This meant that the bodies of those missing but presumed dead were here somewhere. I don’t know how I would of felt if we had in reality come across someone. I probably would have had the same look of alarm as that girl, and I’m sure that image would have stayed with me forever. However I found solace in the fact that even if that did happen it was a good thing, for it would mean someone being returned to their family, them being able to put them to rest as they chose and bringing some closure.

The rain got heavier and heavier until we were told to stop work and take shelter under the eaves of a now wall-less home that somehow still managed to stand and be stable. I was eager to get back to work. The three of us who had come for the ceremony were only here to volunteer for the day and we had made significant progress on the remains of the home that I wanted to see through. Unfortunately the weather gods had other plans and rained out the rest of the day’s work.

Driving back along that bumpy road I felt disappointed that we couldn’t do more today but at the same time grateful that I had been given the opportunity to see this place, the worst I had seen. It was important for me to see and understand the reality of what had happened from different perspectives. The clean-up was only just beginning here, recovery was long off. At the very least I could share my stories and hope that others would continue to donate or even get here themselves. A police car passed us with sirens on interrupting my train of thought, a body discovered by another group of volunteers just up the road from where we had been working.

Back at the university, we packed our bags into the car. We were lucky that other volunteers had prepared food, perhaps leftovers from meal services to the local community, and we were welcomed with tasty fish on rice followed by a steaming hot bowl of tonjiru (soup made with pork and vegetables and flavored with miso), the perfect comfort food for the cold and rainy day and indeed the first hot meal we had received while volunteering.

We started the long drive back to Tokyo with full stomachs and even fuller memories. I had grown fond of this place, its people. I wondered how things would look the next time I was here. The progress was going to be slow but I could decidedly say it would be better. Gambatte Ishinomaki! (Hang in there, Ishinomaki). 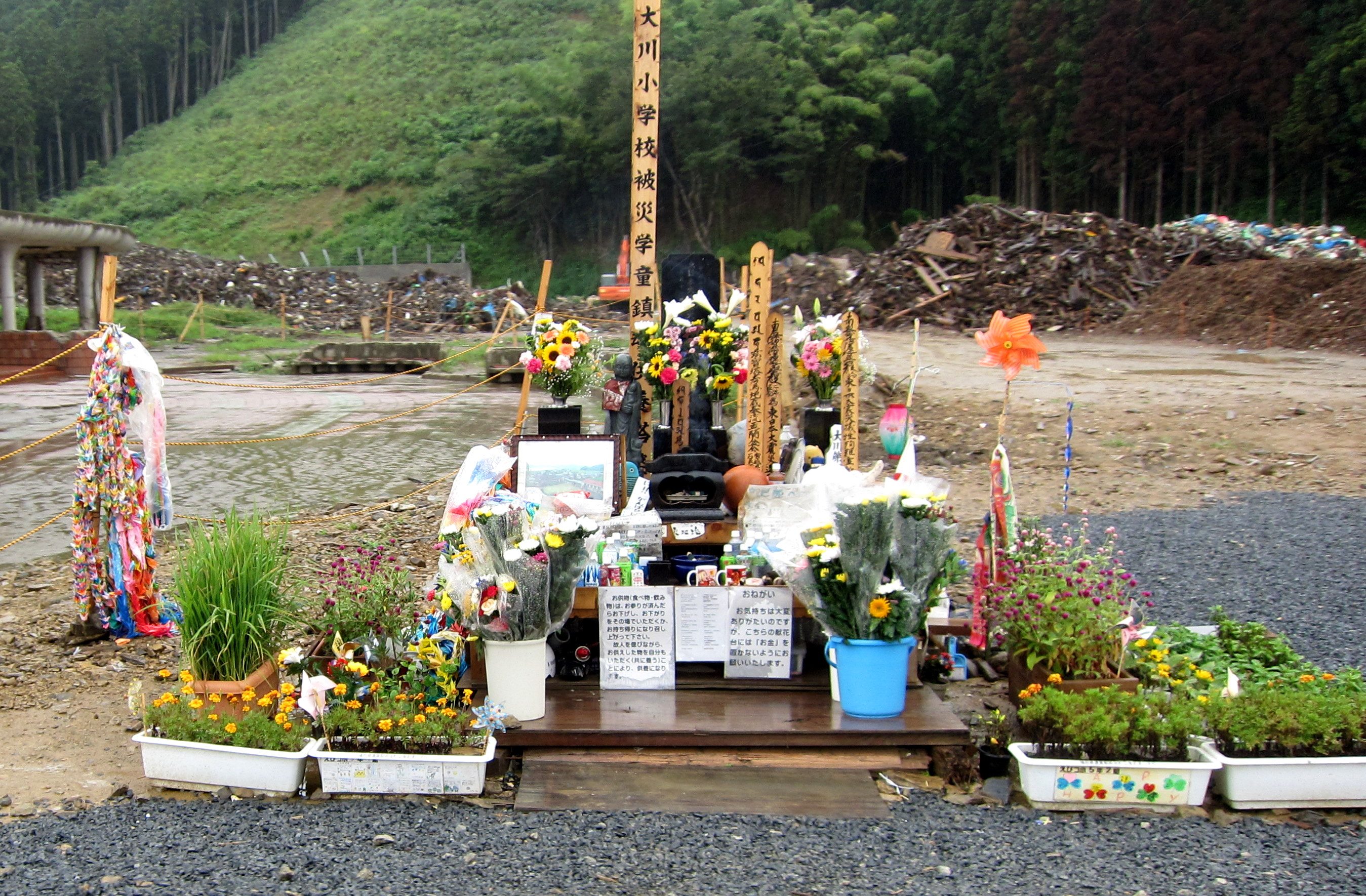 This shrine now marks the elementary school grounds where 67 young lives were lost. 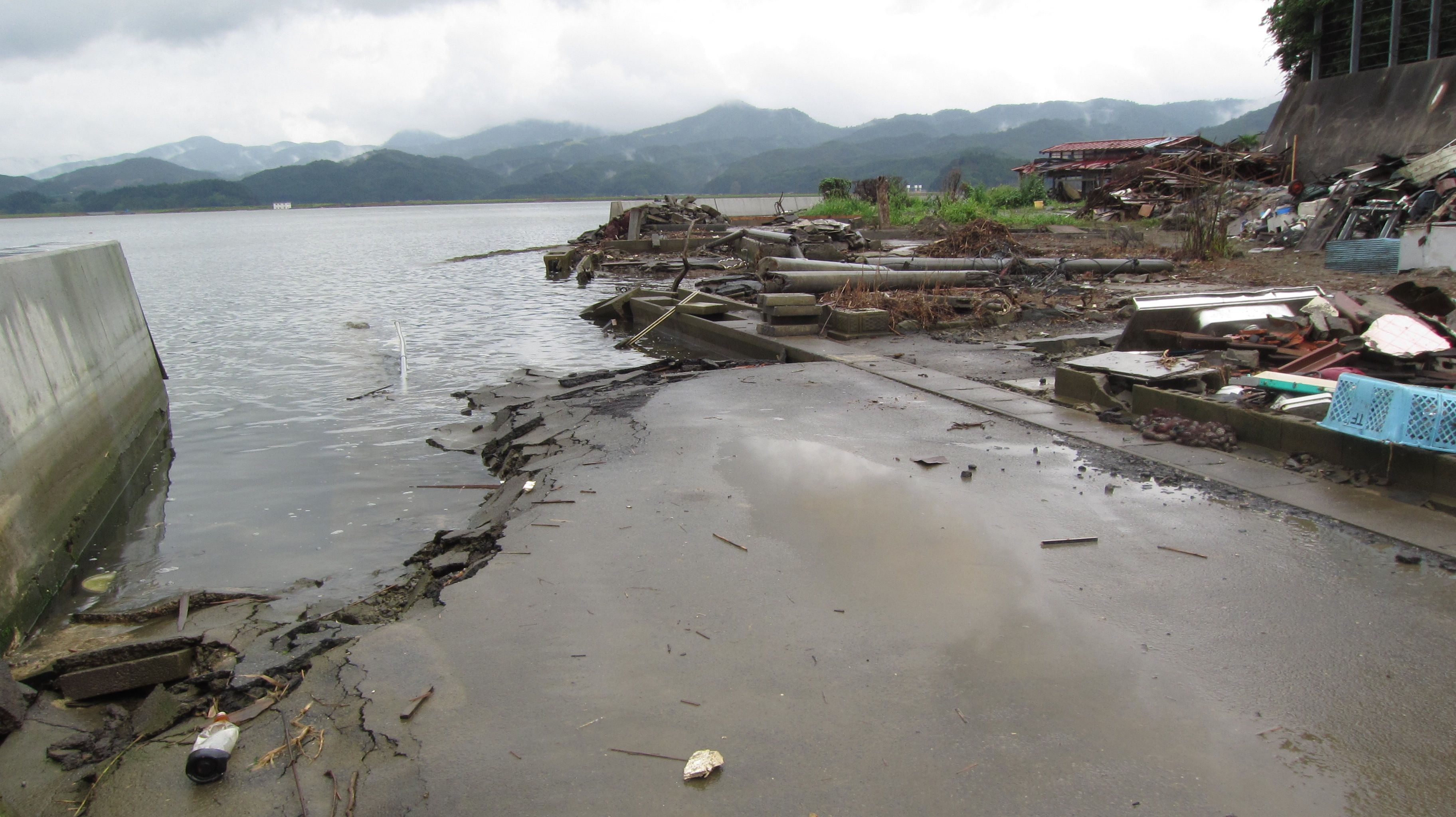 We were working along this strip of land, the mountainside stopping the tsunami from encroaching further inland. The water had receded enough to expose the debris from houses in this small area. The water to the left now remains permanently. 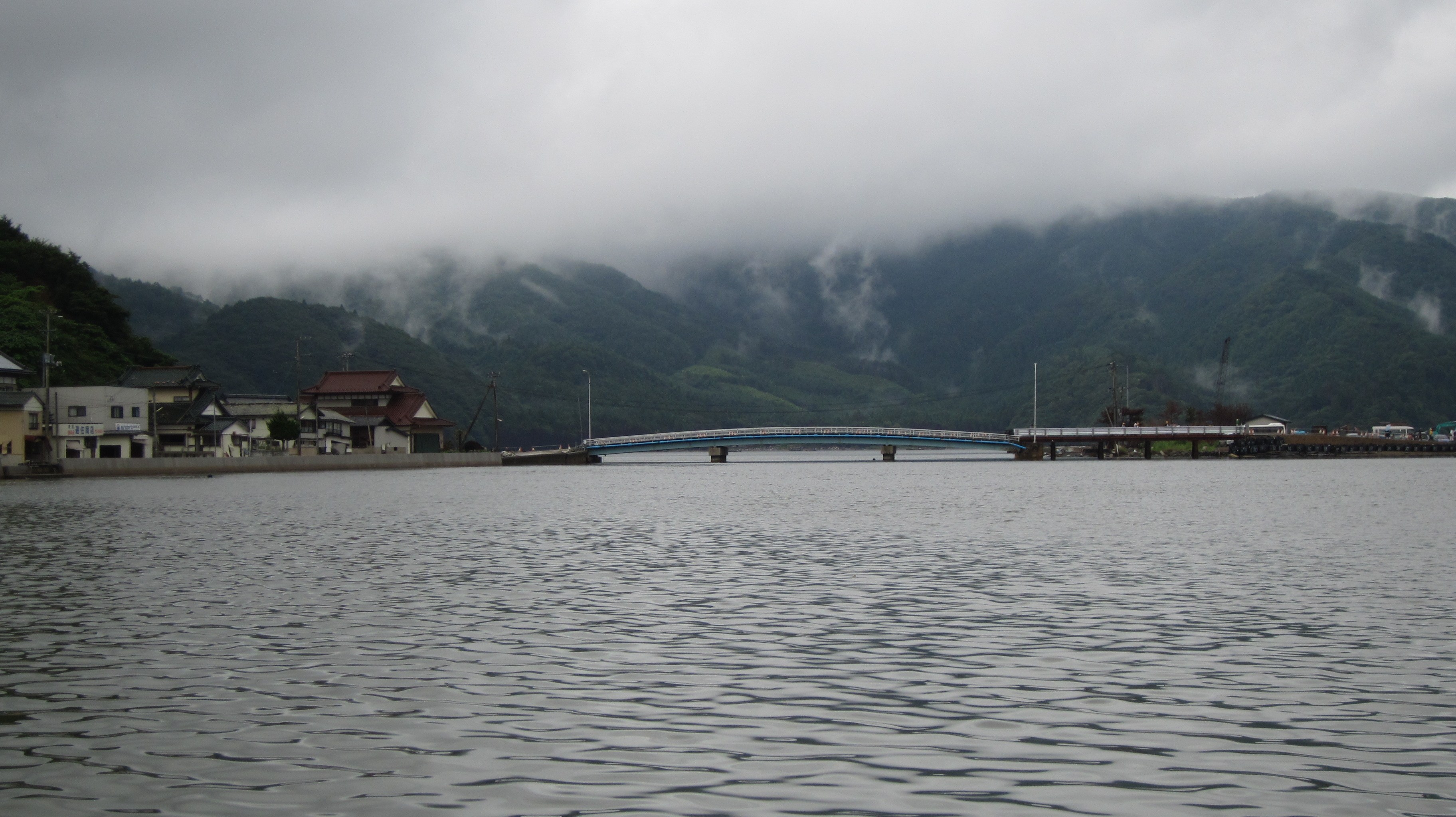 The bridge connecting the make-shift gravel road to the area we were working on. 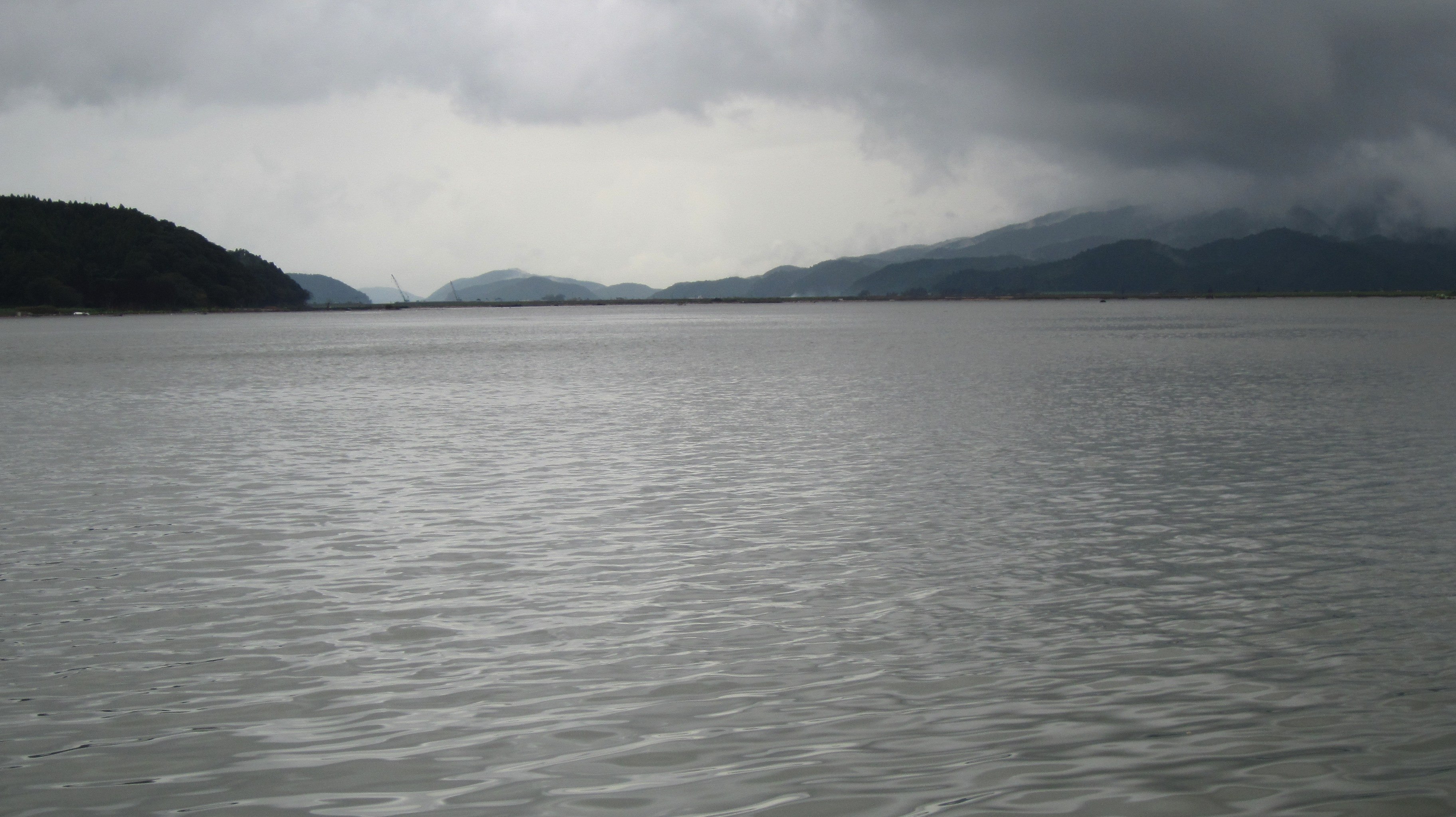