Part Ten of my volunteering accounts in Ishinomaki, a town hard-hit by earthquake/tsunami of March 11th 2011. 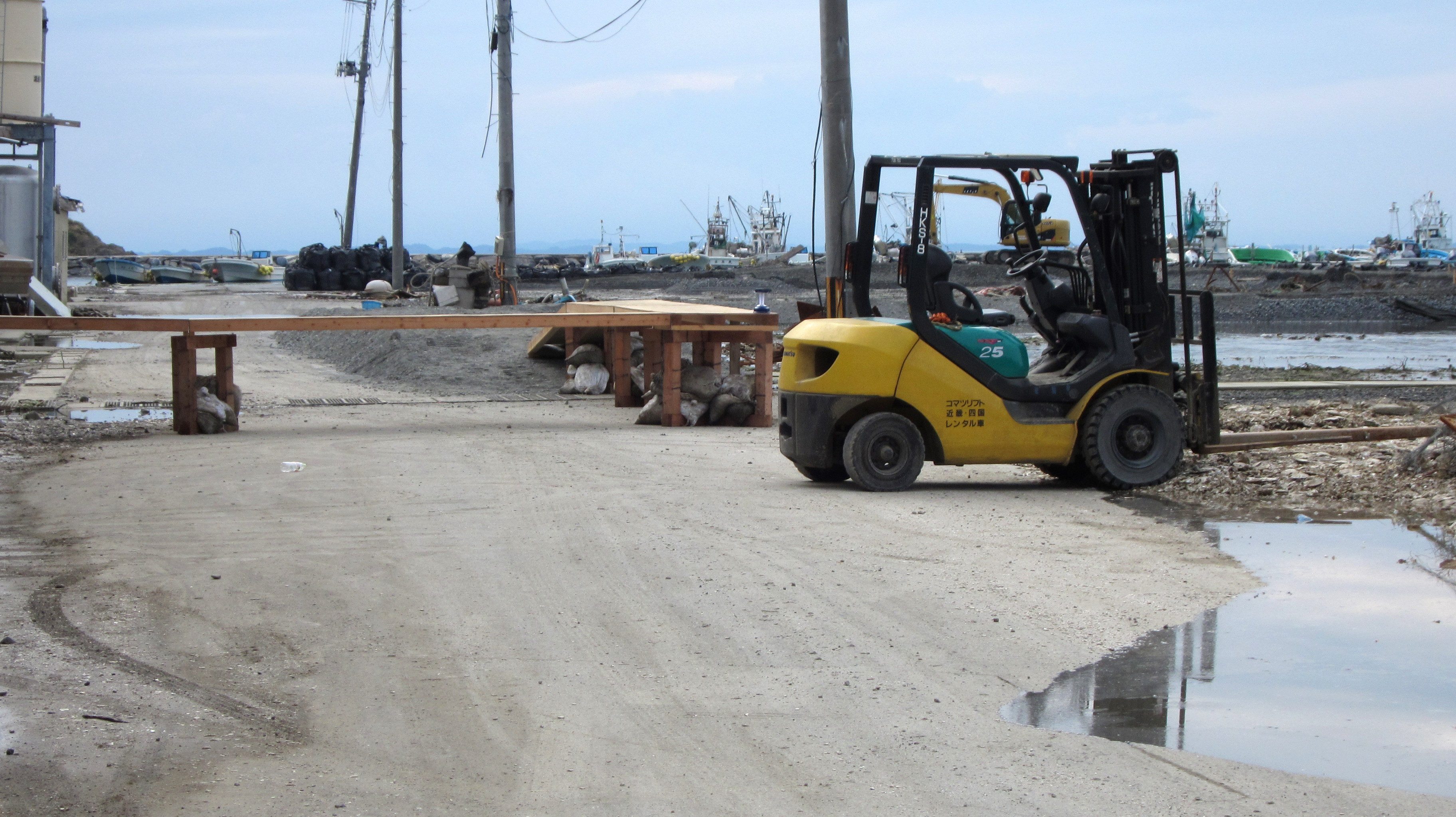 Something didn’t quite sit right after returning from my first trip to the disaster affected areas. I felt strange to be back in a place that now seemed so disconnected from the continuing reality of Tohoku. Something had changed in me. I now saw the disaster through different eyes. Not just my own as my heart starting racing and the floor beneath me no longer bore the groundedness I had always known, but through the eyes of someone who had gone through all of that and much more, and come up empty. During my last goodbye with the fishermen, I had felt a certainty that our paths would cross again, not simply by a chance meeting but because we would make it so. The fishermen kept in almost daily contact, and within two weeks a few of us who had become close to them were invited to attend a memorial lantern ceremony at Kobuchi-hama.

We drove nine hours to the bay. Now I could appreciate the skills of the bus drivers we had during our first stay, locals who had generously given their time to transport volunteers. The roads were incredibly damaged, damage I hadn’t noticed before from the back of the mini-bus. Jagged lines like lightning bolts had caused gaps and cracks, and parts of the road had been uplifted entirely or fallen away down the mountainside. The mountain road, already dangerous with its constant sharp twists and turns, was now laden with obstacles.

We were greeted warmly when we arrived, almost with a sense of surprise followed by happiness that we didn’t just say we’d visit them again but that we actually came. Of course, not long after our arrival, they had gotten a hold of some ice creams. It had only been two weeks since we were here roping those oysters but this already felt like old times.

The fishermen were busy building a wooden platform that would be used to access the boats releasing the lanterns into the water when the tide rose. They had basically finished constructing it by the time we got there but they did need help testing its stability. Firstly that it could hold the weight which involved us parading up and down it, and secondly to ensure it didn’t float away once the tide rose which involved sandbagging the base. Our clothes quickly became muddied with the wet, dirty bags. We didn’t care though and they laughed as we happily dove into the work with them despite our non-work attire. We prepared the solar lanterns too, removing them from their packaging and setting them out ready to light the way that evening.

We had the chance to speak to the head of the conglomerate. He was out the back preparing ropes for seaweed cultivation. We had gotten the last of the oysters during our previous visit so it was now on to seaweed cultivation for the next six months. He said they were preparing the ropes that were saved and also new ones that they were able to source from overseas.

After a couple of hours, we started back to town. Just a tiny way up the hill though we pulled over, spotting two other fishermen. They were out by the road side, stoking a drum of burning debris.

After returning to the university grounds to set up camp, it was a quick turn-around before the hour or so long drive back to Kobuchi-hama. The light was growing dim when we got back. The scene was one of tranquil beauty, the path lit with the solar lanterns we had prepared earlier.

Locals pulled up out the back with pick-up trucks filled with exquisite and delicately-prepared paper lanterns, each one representing a person lost from this community. The lanterns shone brightly in the darkness. We were handed two lanterns, one for each hand, and we walked in silence up the makeshift path, through the working area, up on to the wooden platform now surrounded by water, and to the boats. As I walked, I took a moment to read the name of the person, always beautifully inscribed down the side, and take in the love and heartache that must have gone into preparing this lantern, which often included offerings of sweets and origami paper cranes. The profoundness and privilege of being allowed into this moment was not lost on us.

It was a solemn walk, going back and forth to collect two more lanterns, two more people, each time. But always acknowledged warmly at both ends with an ‘arigatou gozaimasu’ (thank you) or ‘otsukaresama desu’ (thank you for your efforts).

There was a distinct beauty to the scene around us despite the sorrow of the occasion. Everything had been prepared with the utmost care and attention to detail, indicative of how important it was to them to send their loved ones off well into the afterlife.

When all the lanterns were in the two boats, we stood by the water’s edge and watched as the boats were paddled out into the bay by hand, not by the usual motor.

Kobuchi-hama looked so different by night, a tranquil wetland. The moonlight reflecting off the high tide and the call of birds, croaking of frogs and the breaking of water as fish jumped around echoed into the still night.

The boats made their way into the bay, and after some time we saw the first of the lanterns making their way into the water. A small group of us, no more than 15, the few of us volunteers plus a small group from the local community, stood in silent prayer. The only movement was the wiping away of tears. This time I didn’t cry though. Not because I was not moved by the scene before me or that I had stopped feeling the enormity of the loss after the months that had passed, but because I felt a strange sense of peace at that moment, that this small fishing community was finally in a place where their people: fathers, mothers, children, friends, were now able to be acknowledged and honored with such beauty and dignity after months of limbo. I felt the healing process had begun. For that I felt a serene contentment and soaked up my surroundings, feeding off this community’s spirit, unsure if I would ever see such a heartbreakingly beautiful scene with my own eyes again. Fireworks intermittently lit up the night sky in the distance, the show far enough away that it showered the night sky with color in silence, an unexpected yet beautiful addition to the scene.

Our stares stayed fixed on the lanterns until the very last glimmer of light faded into the horizon. The boats came back, now hidden in the darkness with the lanterns gone, just small flashlights and the sound of voices alerted us to their approach. They were not serious low whispers as you might expect, but heartfelt laughs. In true Kobuchi-hama spirit, like the unbreakable resilience I had witnessed during my first trip, they honored their loved ones by remembering the joy they had brought to their lives, their gratefulness for the blessing of life.

We all walked back to the working shed with linked arms, warm handshakes. It felt different to be there at night, no assembly lines, just empty space with the flicker of solar lanterns lighting up our faces. We stood around in a large circle and heard from some of the fishermen, it was emotional. Afterwards we chatted casually and elongated our goodbyes yet again with more pictures and well wishes, and banter over packing up the lanterns.

It was now pitch dark and the fishermen took a few of the lanterns to light the way back to our cars. We stood around in the dark with another round of goodbyes and another speech by one of the fishermen. He thanked us again for everything and invited us back again for the harvest festival they would be having once the oysters were ready. “I don’t even want to sell them”, he said. “I just want to save them all and have a big oyster feast with you all”.

It was another good 10 minutes after that before I turned the key in the ignition. As we drove off into the darkness, we could see them waving us off in our rear lights, ‘ki o tsukete ne’ (take care, won’t you), they called out. They texted us until they knew we were safely down the mountainside and in our tents. 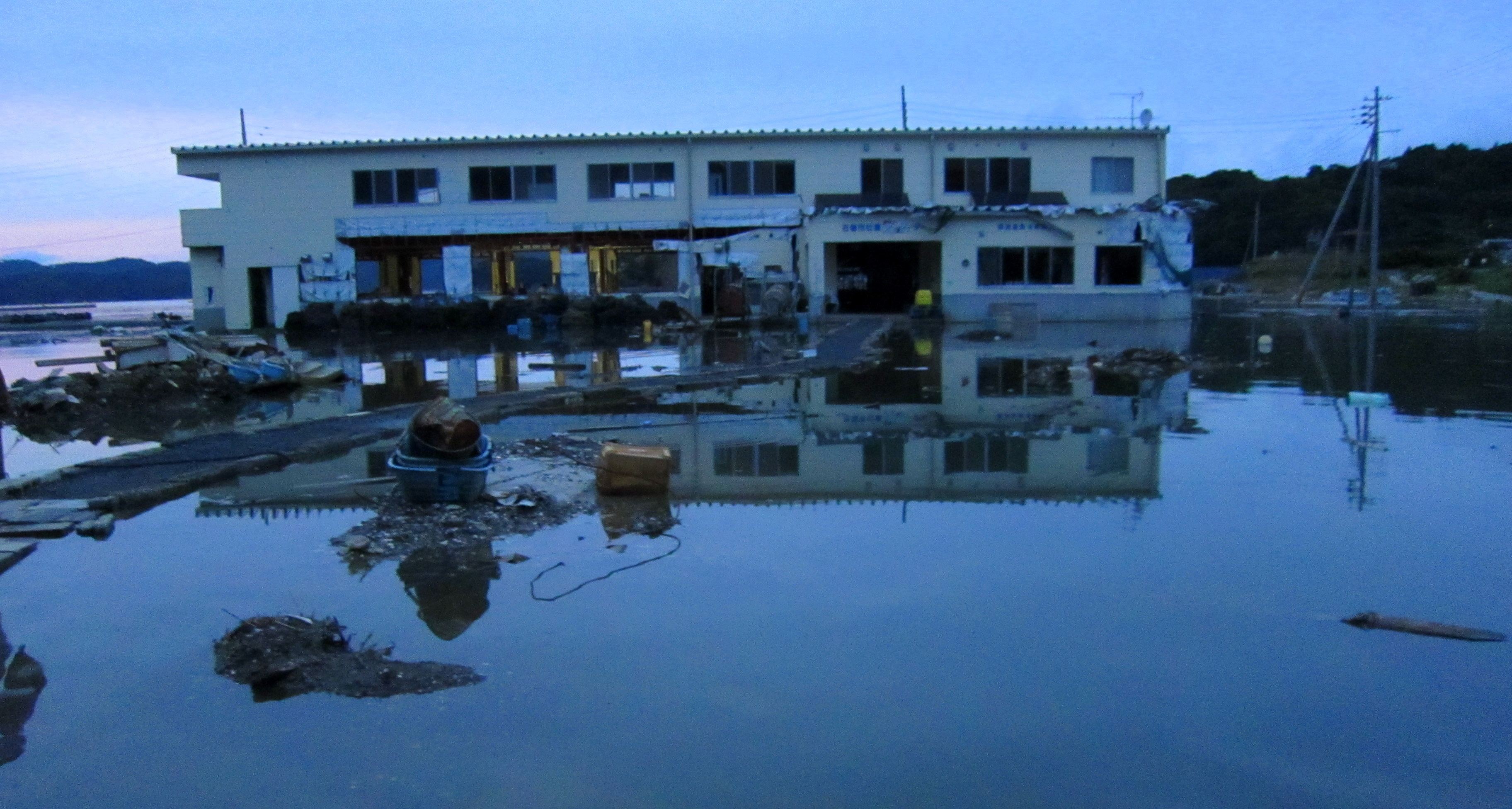 The light grows dim and tide rises as we arrive at Kobuchi-hama for the lantern ceremony. 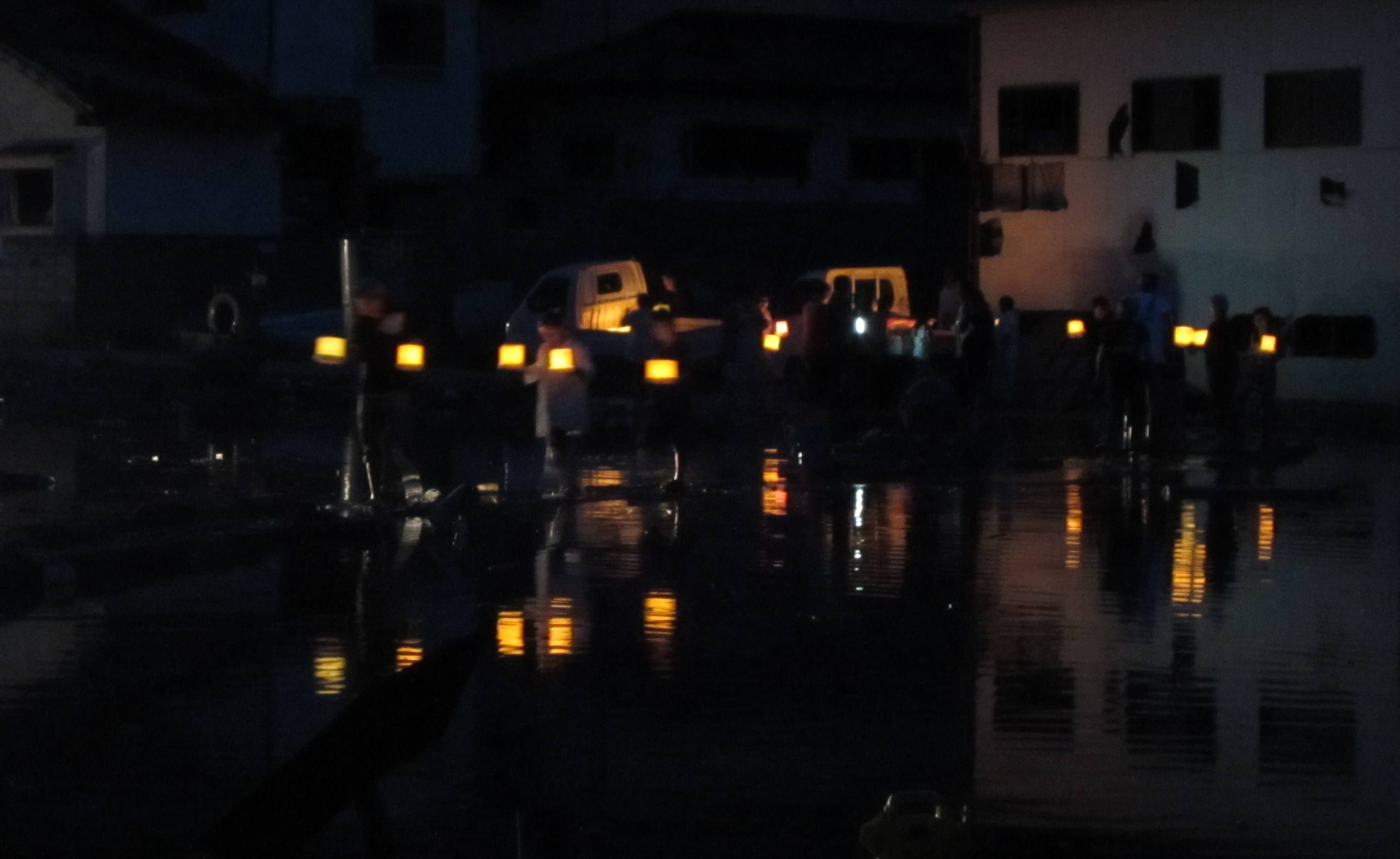 The lanterns begin to be taken from the pick-up trucks.