Want to start the New Year afresh? Well, a dip in the freezing waters of the North Sea off the coast of the Netherlands will do just that…literally.

Have I mentioned that the Dutch are cray cray? Well, if their New Year's celebrations are anything to go by, they are. And Hai is now claiming this must be where I get it from.

The idea of the New Year's Dive on January 1st began in the 1960's and since then has become an annual Dutch tradition. In total, about 40,000 people take to the icy waters at over 60 locations, with the biggest one taking place in Scheveningen, The Hague.

Dragging ourselves out of bed after a few hours of sleep, we once again walked the streets, now littered with carnage from the fireworks the night before. There were now only intermittent bursts from those continuing the explosive fun, but for the most part the streets were quiet. Even at such an early hour after a party that had been basically going on all night, the beach-bound buses were quite full, mostly filled with those going to do the same thing as we were. All armed with our towels and changes of clothes, the bus emptied at the terminating station, Kurhaus. No knowledge of the local area was required to find the event, simply follow the crowds converging towards the beach, just 100 or so metres away.

When we got to the registration point, things came to a little bit of a standstill as the newly arrived participants tried to absorb into the crowds and find the ends of the queues. We went all the way down to the other end where luckily there were shorter ones. The lines were orderly and everyone was in a festive mood whether they had come out especially for the event or were still out from the night before. With a participant cap of 10,000, you should get there by the time registration begins at 10:30am to avoid disappointment. We arrived at 10:30am, reached the front of the queue to register at 11am and the event had reached capacity by 11:30am. 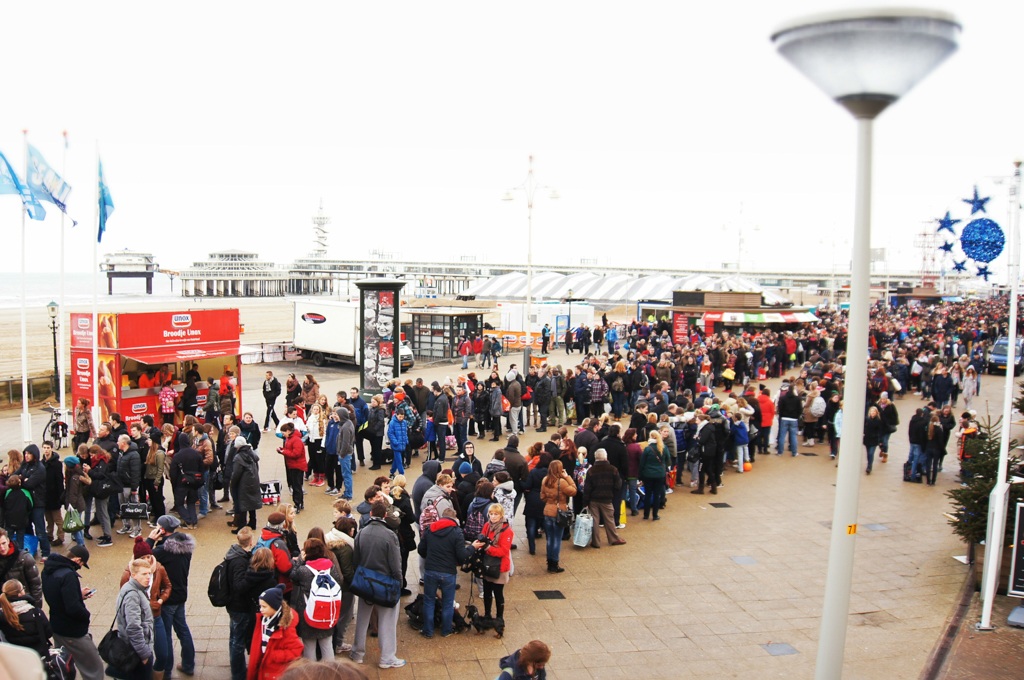 While they call it “registration”, you don't actually have to register any details, it is rather more a ticket stand. If you are a group, there is no need for everyone to queue up; one person can buy any number of tickets and they'll just keep selling until sold out. Tickets cost €3 with €1 being donated to charity.

The beach area is cordoned off and you'll need a ticket to enter whether you are wanting to participate or just take photos. However, anyone is welcome to observe or take photos from the surrounding board walk and spectator areas. When you show your ticket to enter the beach, you'll receive a goody bag from the sponsor with an orange beanie, a participation ribbon and a big can of Dutch pea soup. Most people don the beanie right away creating a rather fluorescent sea of Dutch pride. Although you certainly don't need to be Dutch to participate and with the event's growing acclaim, more and more tourists are taking part in the spectacle. 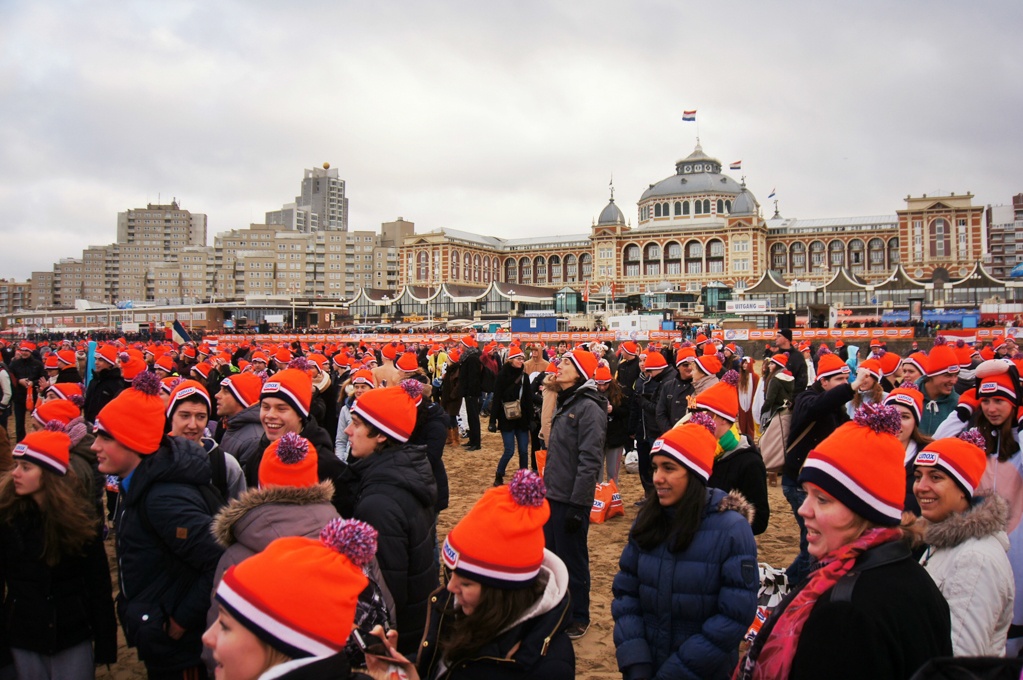 There are large tents at either end of the beach area where participants can shelter from the weather, however, there are no changing rooms. Best to have your swim wear already on under the layers so you'll just need to strip off. However, unless the weather turns really bad, we'd recommend heading to the main stage for the real fun. With the start of the dive not until 12pm, the beach dance party will keep you moving and warm, and it's worth getting down there early just to soak up the atmosphere and see the crazy costumes that people have come up with. The more awesome the costume, the more likely one is to get on the local news. And some use the occasion to promote their own brand or cause by wearing uniforms or bringing signs. The bikini-clad babes are of course always a hit with photographers, highlighting just how crazy this challenge is during the midst of a European winter.

Unless you're one of the really crazy few, you won't want to be getting down to your bikinis and shorts until the final few minutes before the dip. Even just your bare feet against the sand is enough to start loosing feeling in your toes. Because of that, many people went in with their socks on or wore flip flops or sandals. 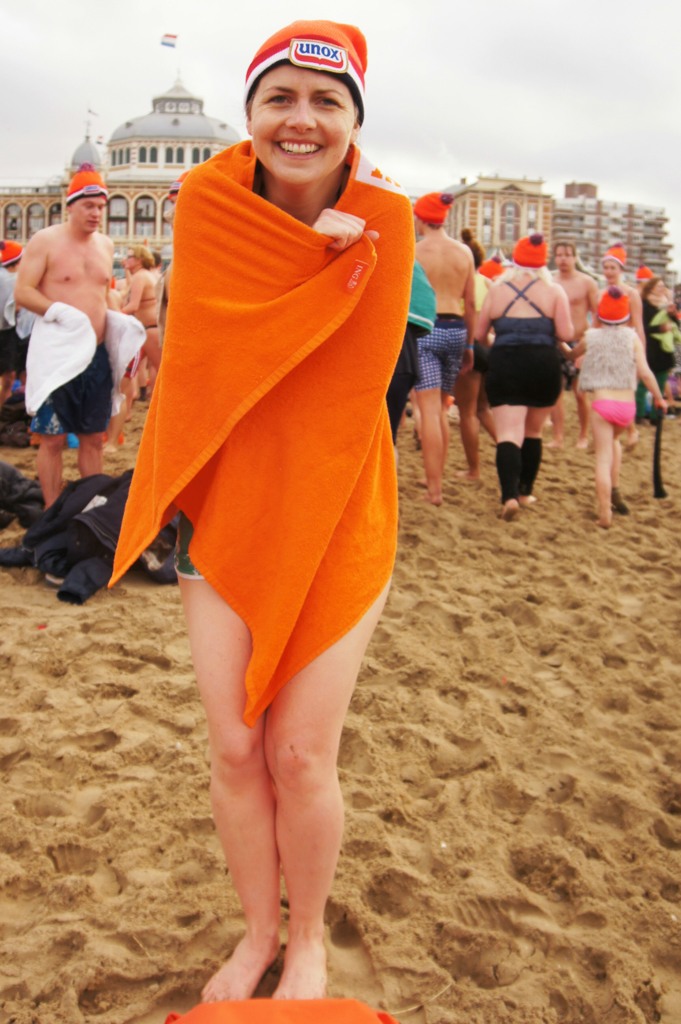 When the siren sounds, the crowds dash towards the water in a celebratory frenzy. While the water is (unsurprisingly) freezing, there is something about the collective energy that just makes you run in without hesitation. With so many people in the water, the waves you can't see coming seem sudden and quickly take you from waist to chest deep. Most return just as quickly as they went in having already felt the lashing pain of water that bitterly cold. 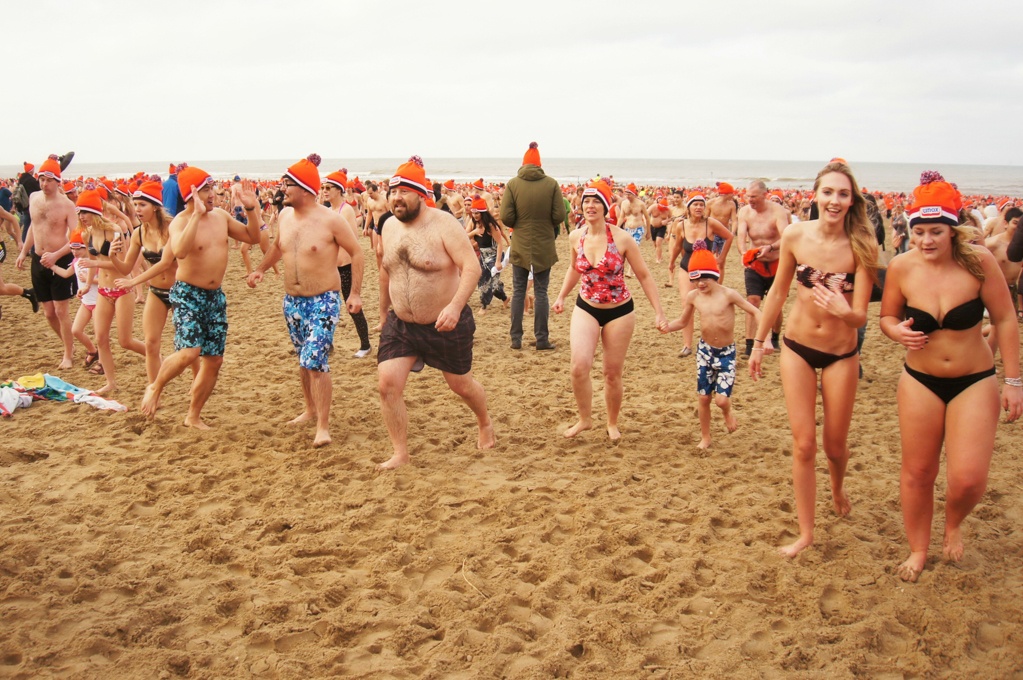 It's then a mad sprint to find your bags on the beach. We deliberately aligned our bag with a landmark and brought along our fluorescent yellow rain cover from one of our backpacks to pile all of our stuff into, making it easier to pick out amongst the thousands of bags and also kept all of our stuff together. And, believe me, you really don't want to be scurrying around trying to locate where you left your gear in your excessively cold state. Put your towel at the top before the dive so it will be the first thing you can grab. You'll then be wanting to get your clothes on as soon as possible. In the crazy scram to try to get my socks on (not feeling your toes has to be the worst part), I put both on and just stood on the sand rather than putting one on and stepping into my shoes one at a time! I ended up bringing home half a beach!

After getting re-acquainted with your warm, dry clothes, one can recover with a free hot bowl of Dutch pea soup. I remember this dish as a child and not really liking it, most likely because I'm not a fan of peas. Whether my tastes have changed, this was a particularly good batch of soup or I just didn't care what it was because it was hot, it was pretty damn tasty.

We got back on the bus triumphant, feeling a sense of camaraderie with the other orange beanie wearers and happy we were here to share in an annual tradition. We went, we conquered, and started 2014 with a splash! 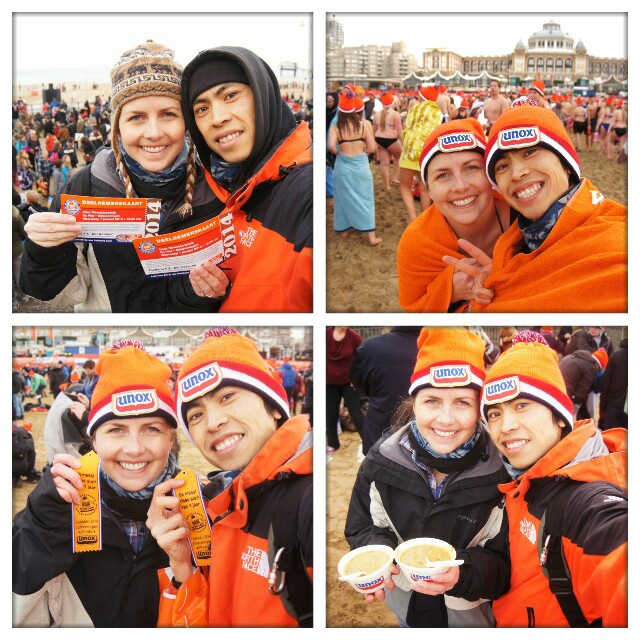 Have you or would you participate in a New Year's Dive?

Congrats you crazy kids! Personally, think we're going to skip out on this kind of adventure. We freeze our tushies off enough at home. ; )

Thanks, Britt! Yes, saw your post on surviving the winter in your part of the world so don't blame you really! ;)

This is awesome! Congratulations on doing the dive! Love these photos! We never went out and saw this but we have very fond memories of Scheveningen. My best buddy while living in the NL lived a 5 minute walk from where your photos were taken.

One summer he went home to Minnesota and let us stay in his place for the 10 days he was gone. That was our summer vacation as our funds were very limited. Bell commuted to work in Amsterdam from there a couple days. I watched the Netherlands beat Brazil in the World Cup semi final on that beach on a beautiful day. The beach hang outs in summer in Scheveningen are fantastic. We had so much fun there!

Your post brings back great memories. Happy New Year to both of you!! :)

Thank you! We froze but it was worth it for all the fun! Sounds like a nice summer break you had in Scheveningen - must be a lively atmosphere at that time of year. There were of course a lot of people on New Year's Day because of the dive, but it quickly became quiet as everyone downed their pea soup and headed home for a shower. hahaha

Thanks for sharing your great memories of the area and Happy New Year to you and Bell too!