New Year's in the Netherlands. What can we say? Crazy doesn't even begin to cover it! Think of the most insane party you have ever been to and then give all of those people matches and explosive devices. You can probably see where this is going.

While fireworks can only legally be set off from 10am on December 31st to 2am on January 1st, that doesn't stop the Dutch from starting days earlier when they can start acquiring them in a festive relaxation of fireworks laws. Of course, those wanting to get the party started even earlier find a way to get them on the black market or from neighbouring countries.

Stepping out of our apartment in The Hague at around 10:30pm was like stepping into a war zone. We waited for a break in the fire, looked both ways as we got to the bottom of the stairs, ready to make our dash through the streets.

Where were we headed? To Duindorp beach to witness one of the most spectacular bonfire events we will likely ever see.

We'd wandered to the beach earlier in the day to take some photos of the set-up. When we arrived mid-afternoon, they were busy loading wooden crates onto this ever-growing tower. Men were climbing it to put the crates in place that were being lifted by crane, and every so often they would jump up and down on it to check if it was stable. Um, what happens if it's not, we thought?! 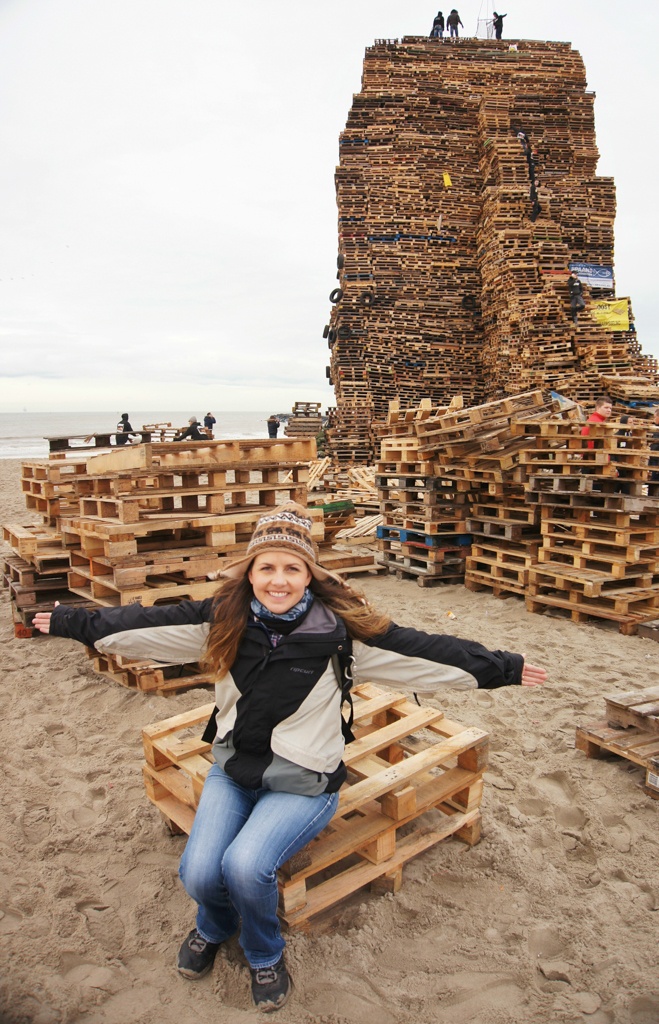 On a beach on the other side, another team was busy creating their own bonfire mountain. You see, this is a contest between the neighbourhoods of Duindorp and Scheveningen to see who can make the biggest fire. Pride was on the line. And they try to out-do themselves and each other every year. It seems Duindorp had been able to conjure up more sponsorship this year. They had a crane. As far as we could see looking down the beach, Scheveningen didn't. Were they passing up all those crates by hand?

Back on the Duindorp side, a DJ was pumping music and keeping the team motivated. A rather meaningless safety barrier surrounded the base that everyone ignored and no one battered an eyelid when kids started throwing fire crackers into the crates.

The big blaze was scheduled for midnight, so we returned home to have dinner with our Dutch hosts before heading out closer to the main event. We walked the hour or so to the site, stopping at an elevated look-out on the way to see all the fireworks going off across the city skyline. Official firework displays don't really need to be had here; you'll get a show regardless.

Back along the sand, we could see the tower off in the distance. It now stood at about five storeys. We arrived just as the first torches were set to the base. Revelers chanted and rejoiced in delight in the same way that mischievous young boys might anticipate the grand explosion of some elaborately dangerous project they had been scheming all afternoon. Again, never mind the safety barrier. 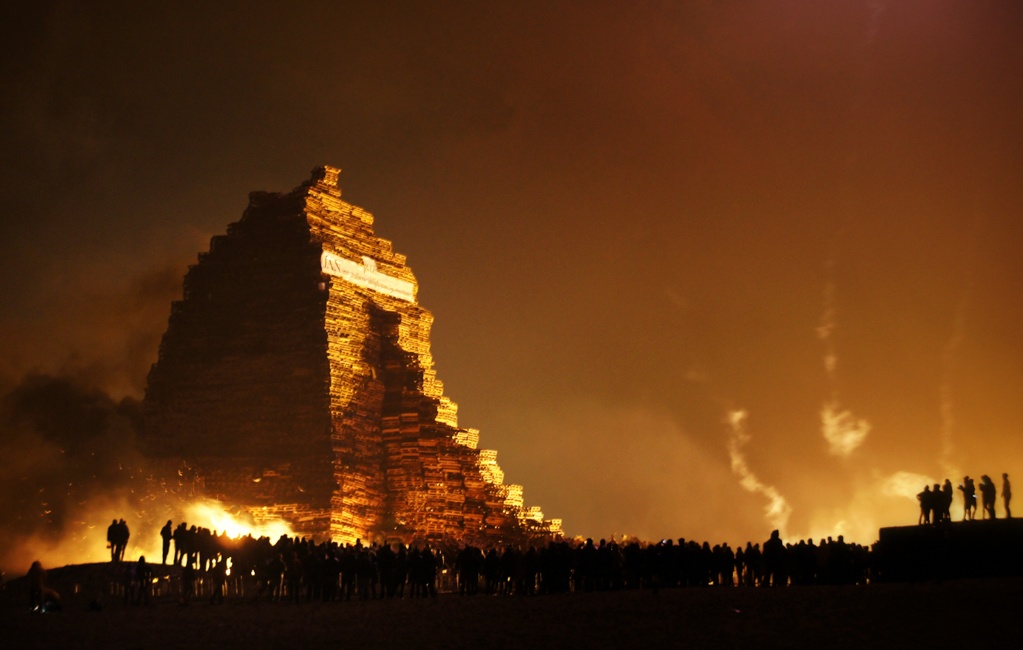 It didn't take long though before everyone was forced further back from the raging flames engulfing the tower. We moved down to the shore line where there were fewer people. From that angle, it was very clear that the mountain was burning unevenly from one side. That isn't going to hold, we commented. 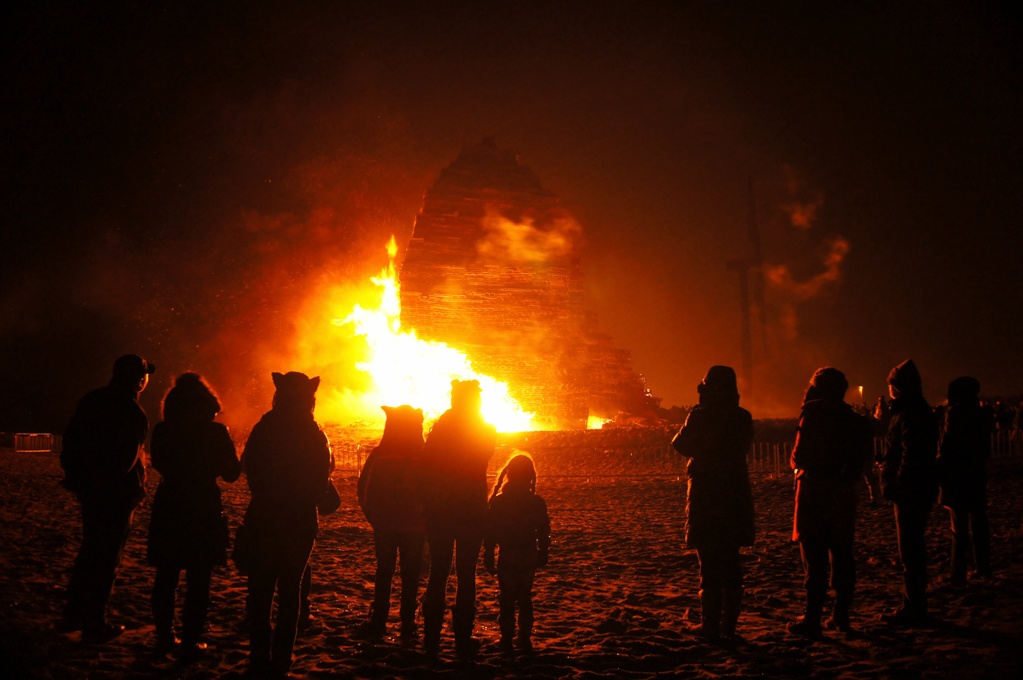 Minutes later someone ran down the beach urging people to move back. We could see the scenario unfolding before us. The tower started leaning directly towards the shore line. Ruuuunnnnn!!!!!! The entire top came crashing down, sending a wave of palettes cascading down the sand, slipping and sliding and bouncing off one another. Even through the headphones I was wearing to stop my eardrums from bursting and my heart from stopping at every sudden bang, I could hear the mixture of cheers and screams around me.

It came close, like within metres of people close. Thanks to that man who had the foresight to warn others of the impending danger, it could be outrun.

Seeing as though no one was hurt, the scene quickly returned to festive with laughter and photo-taking. The rogue crates became make-shift seats for party-goers to take in the rather surreal surroundings and enjoy the first hours of the new year. 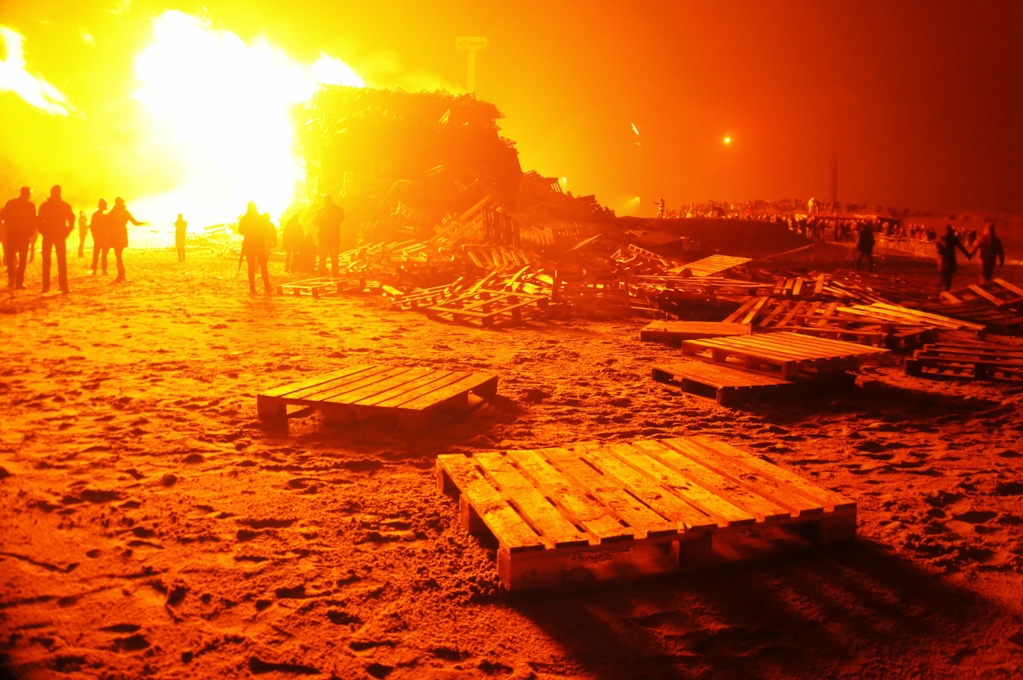 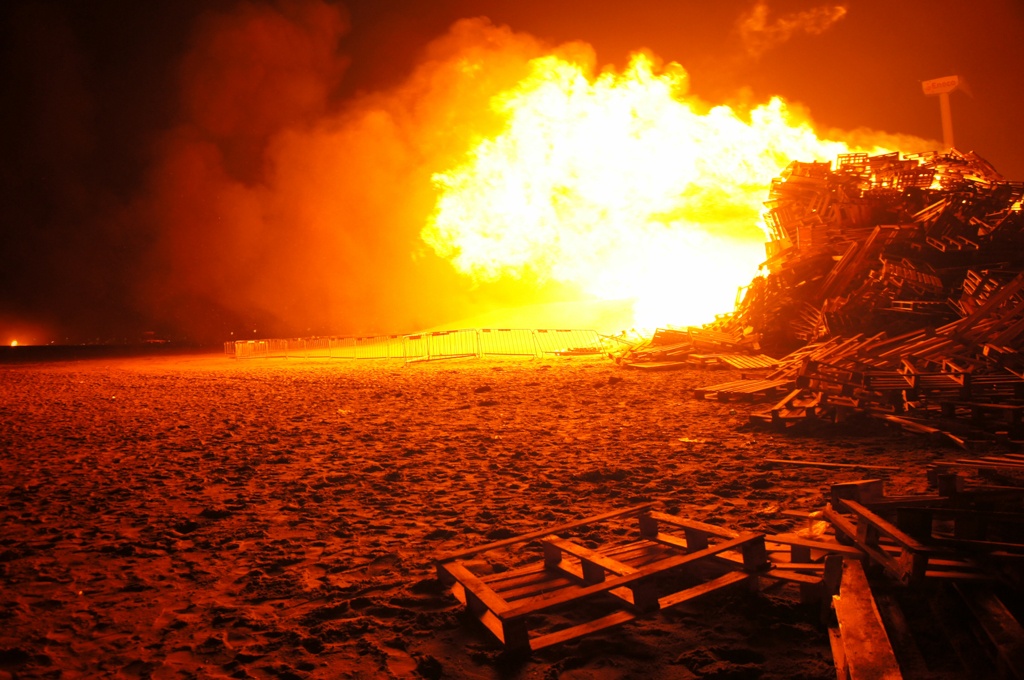 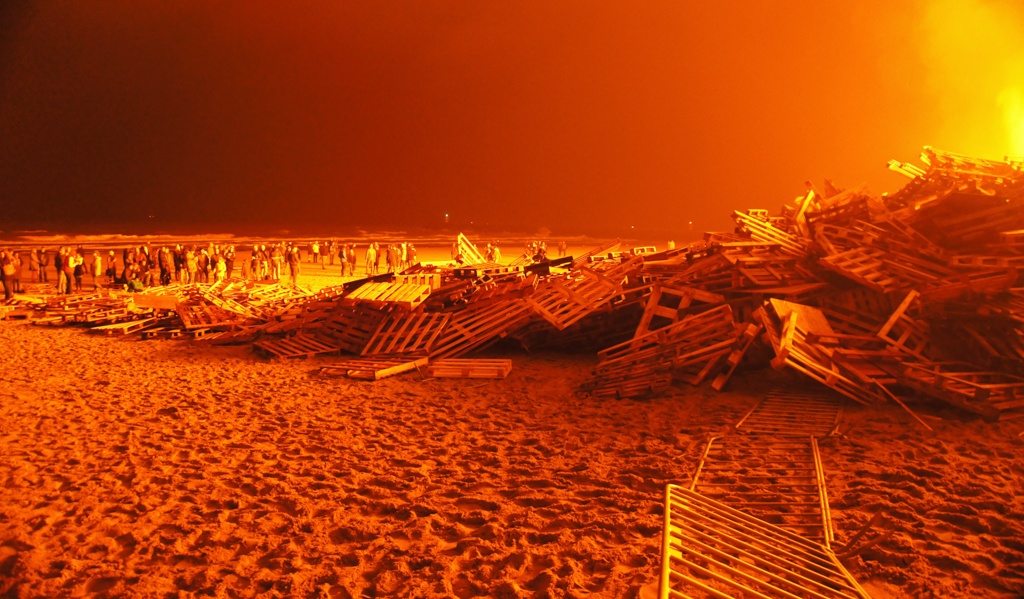 The “safety” barrier and how far over the palettes actually fell. 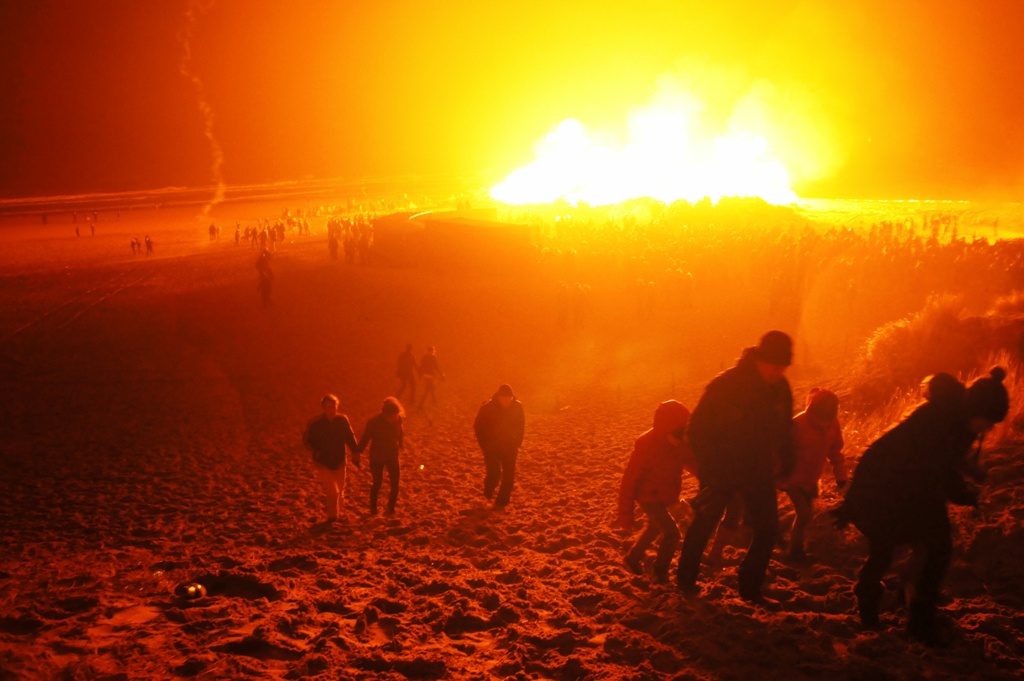 Of course, the Dutch had saved their biggest and best fireworks for midnight and the party afterwards. It was at least an hour back to our apartment on foot. Unlike many countries we have been in for New Year's where extra public transport services are put on to get the crowds home, in Holland public transportation shuts down at around 8pm on New Year's Eve, stating it is far too dangerous for services to run with so many people and fireworks going off all over the place. Well, they are probably right about the latter.

We darted in and out of streets, trying to take the safest route but often being startled as we turned corners or as fireworks were thrown from small dark roads into the middle of major ones. They were being thrown from balconies, attached to street signs and even set off at the front of gas stations! The streets were full of things that go bang and figures running from something about to.

The effect of this simultaneous display of pyromania was a constant rumbling across the city and what felt like a movie-esque quest of survival back to the safety of home.

2am came and went and despite fireworks technically becoming illegal again, the night was young and there was plenty more where that came from.

Who actually came out victorious in the bonfire battle? That we can't be sure, but if there were points for execution of a spectacular collapse, then Duindorp had it covered.

What did you do for New Year's?

Er, maybe I'm just too sensible but I would have started the fire near the top

Haha I know, right? Anything would have been better than just one corner at the bottom! LOL

Interesting way to spend New Year's! We were just the 2 of us, having diner together, a simple one, with a bottle of wine, on our south on the Carretera Austral. Something nice. And Raul's surprise is on the way: it's for tomorrow afternoon! :D

It certainly was an interesting evening! hahaha Dinner with a bottle of wine is always awesome! Have to go read what Raul's surprise was! :)