Despite my fear of being eaten by an alligator in the Amazon (read my previous posts on anacondas and pink dolphins to understand why), we were lucky to encounter one up close at camp.

There was a particular alligator that liked to sun itself on the banks right outside camp. In fact, he liked it so much he had been doing so for six years. Our guide had named him and occasionally fed him, particularly during the rainy reason when there wasn't much food in and around the river. He had some scarring too, courtesy of “las chicas” the guide informed us.

Our first encounter with this alligator was one sunny afternoon. We came out of our little hut on stilts (unaware of the background story) to see our guide approach the still river and then suddenly start provoking a set of jaws out of the water. You'd think we'd be used to his antics by now but he managed to surprise us yet again.

He took a few steps onto the bank, still half submerged, jaws open, before the guide gave him a little affectionate touch on the nose. Alligators' eyes face outwards so if you stand directly in front of them you can manage to get your hand above their snout before they realize it. Not that I recommend putting your hand or any part of your body near one.

Hai managed to summon up the courage to give it a tap on the nose that day, while I just stood in front of it for the longest time. I managed to get within about 30 centimeters before he took a step towards me and I retreated. I'd seen how quickly those jaws could slam shut and I didn't want my hand in between them!

The next day, the alligator didn't come because of the heavy rains but I told the guide that if he came the next day, I wanted to give it another try. So the following morning I went down to the river trying to find this alligator who I eventually found on the other side of camp and who had, according to our jovial guide, been waiting there since 5am to eat a girl like me.

The others gathered and the guide gave me some leftover spaghetti from the night before to feed him, but he wasn't very interested. I strategically positioned myself on the other side of a stump and after hesitation finally gave him a little tickle on the nose.

With all fingers accounted for, I can now say I survived a close encounter with an Amazonian alligator. 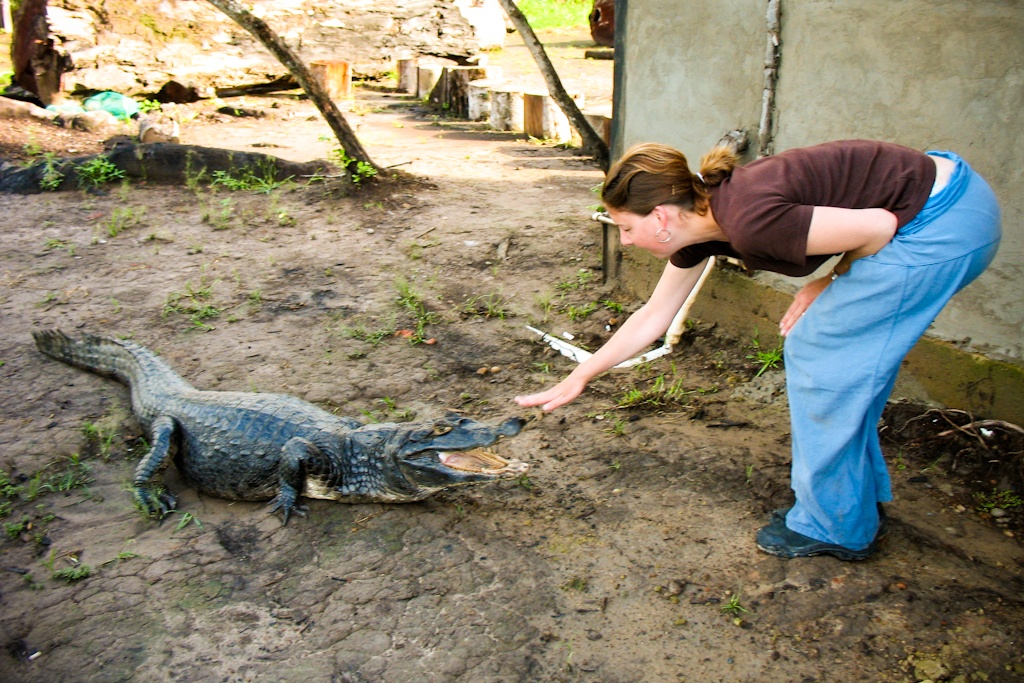 My best attempt that morning by the river before the others were up. 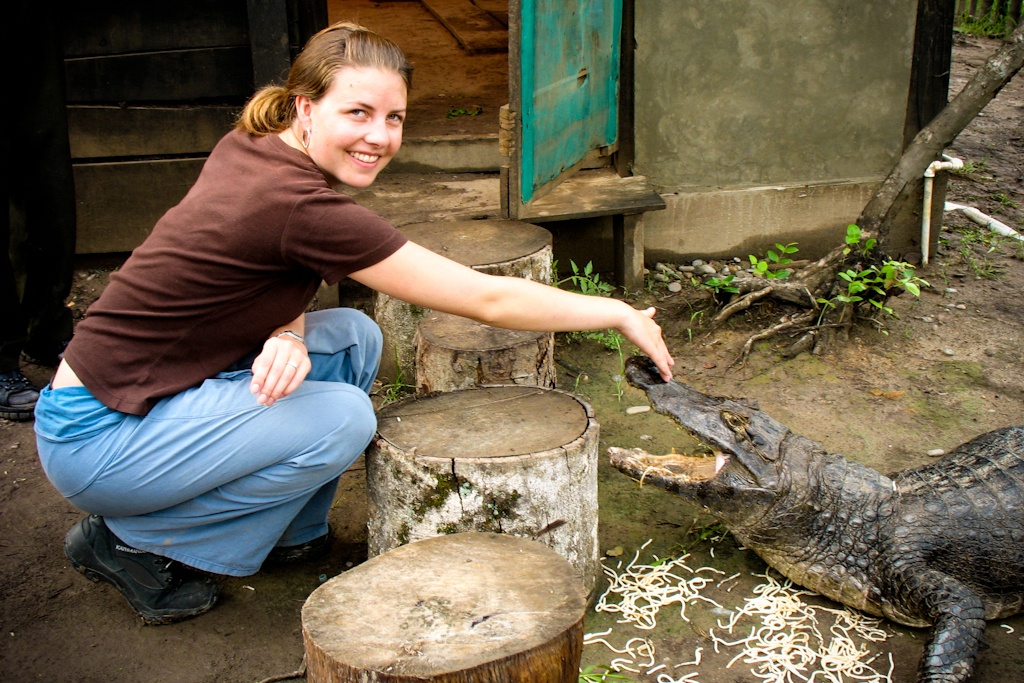 You crazy girl. :D I was holding my breath when I watch this video.

That's amazing. I love alligators. You are one cool chick for not being afraid of him.

Oh, I never said I wasn't afraid, Shantaya ;) But they are pretty amazing creatures, aren't they?

Well-done you! Glad the alligator was not as snap happy as your camera person. Great pictures! I wrestled with 2 alligator at the same time when I was in my 30s. It finished when one of them took a liking to my finger and held onto me for grim death. It took a few minutes to release it as those needle type teeth which punctured the skin. For alligators of twelve inches in length, those jaws were powerful. The maddest thing I have ever done with a large animal was to lie on the floor while an elephant put her foot on my back and massaged it for 5 minutes. It was a great feeling, mad, but a great feeling.

Brave Encounters on the Wild Kind - ha! Great Photos and Good for You in getting up close and personal!

Good on you, lady! you're awesome and incredible! that's definitely a nice one on your "amazing things I've done" list! and, I love the new header design by the way! Cheers to all of that! Jul'

Thanks Jul'! And thanks so much for noticing our new look! Glad you like it! :)