To fill a void. This was the objective of architect Jakub Szczęsny when he set out to build the world's thinnest house in Warsaw, Poland; an urban project that has subsequently stretched ideas of possibility and imagination. 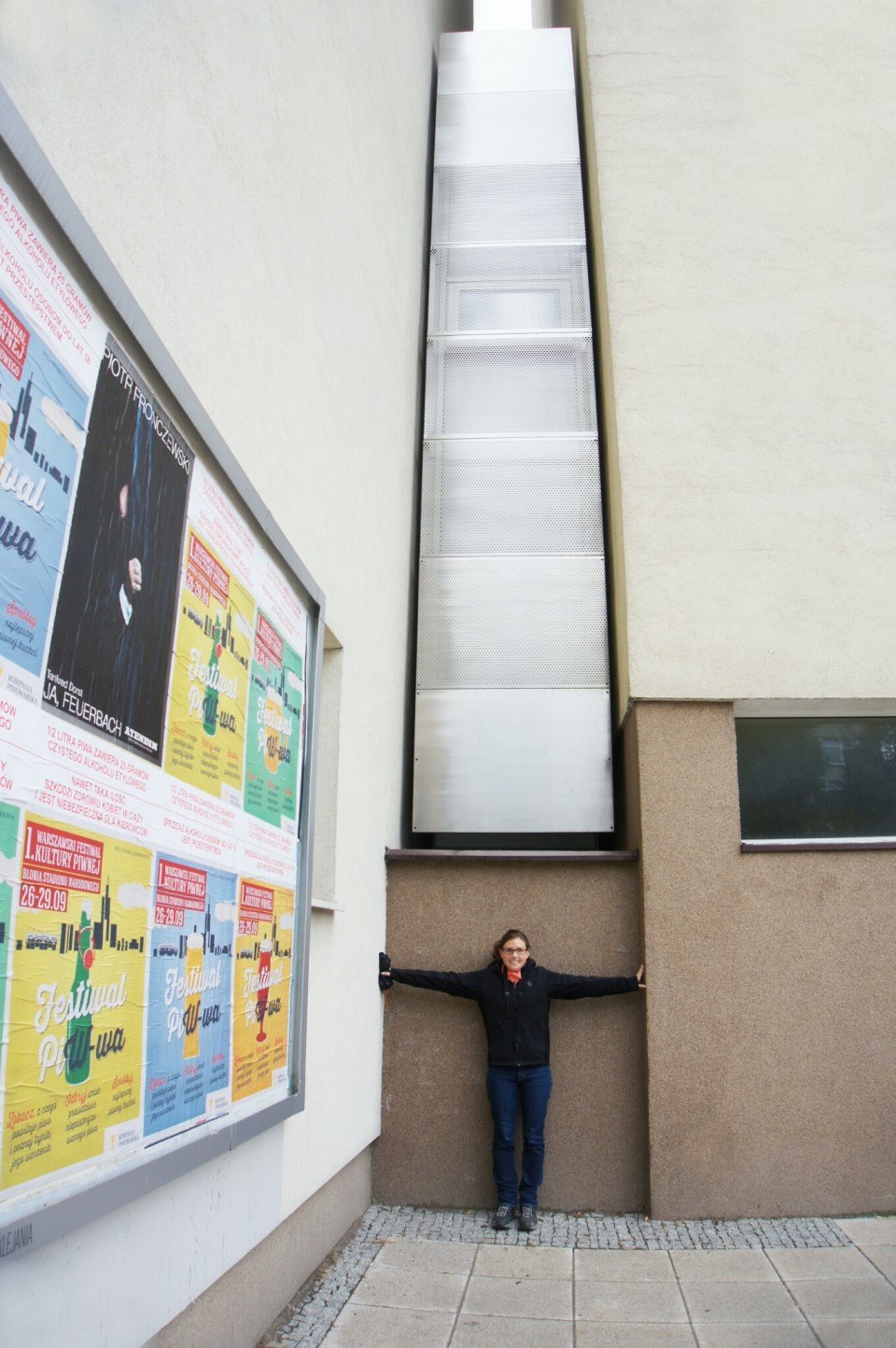 The Keret House, as it is now known, was born out of a chance sighting of a narrow unused space between two buildings in Warsaw's Wola district, stark and contrasting representations of a painful past and the randomness of post-war reconstruction, and coincidentally where the big and small ghettos were once divided by a street. On the one side a pre-war ex-Jewish tenement block and the other a post-war coop pre-fab building, here lies just one example of how post-war urban decision-making has lead to random, unused pockets of space throughout the city.

Szczęsny set out to re-imagine this “void” and fill it with a functional and liveable space that would restore its productivity. Taking inspiration from architects, particularly from Japan, who have worked on similarly narrow plots of land, Szczęsny designed an art installation that could be inserted between the two buildings on a plot of just 92cm at its narrowest and 152cm at its widest. The 14 sq metre house may be on a microscale, yet has all the features of a liveable and workable space including a bed, desk, lounge, kitchen and bathroom. A project that took three years in the making, Keret House was finally completed in 2012. Take a tour through the world's thinnest house with us.

The stairs leading up to the hatch in the floor to enter.

As you come up you'll see the dining table, followed by kitchen and bathroom. The ladder leads to the alcove on the second storey. 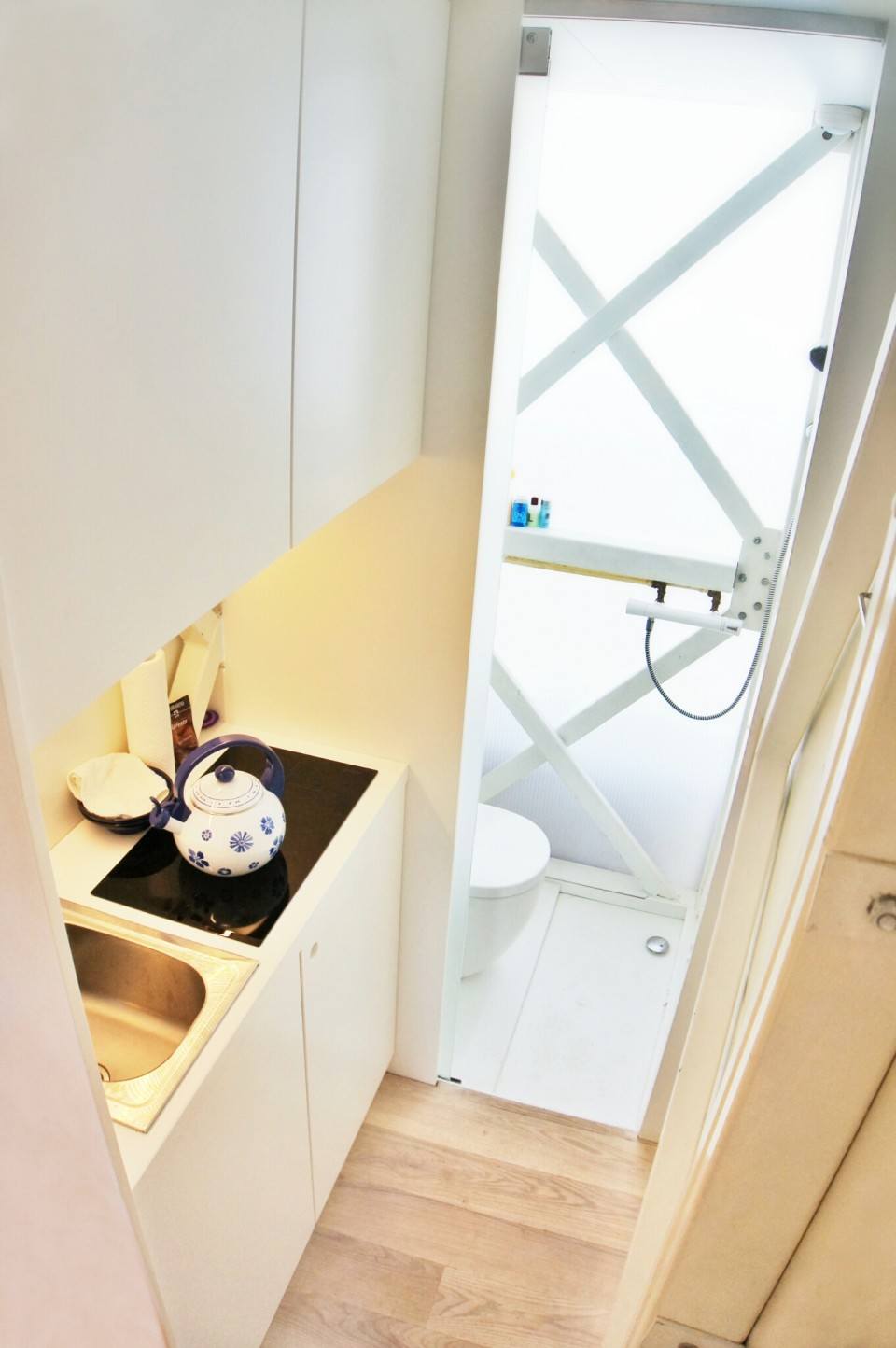 A closer look at the kitchen and bathroom. 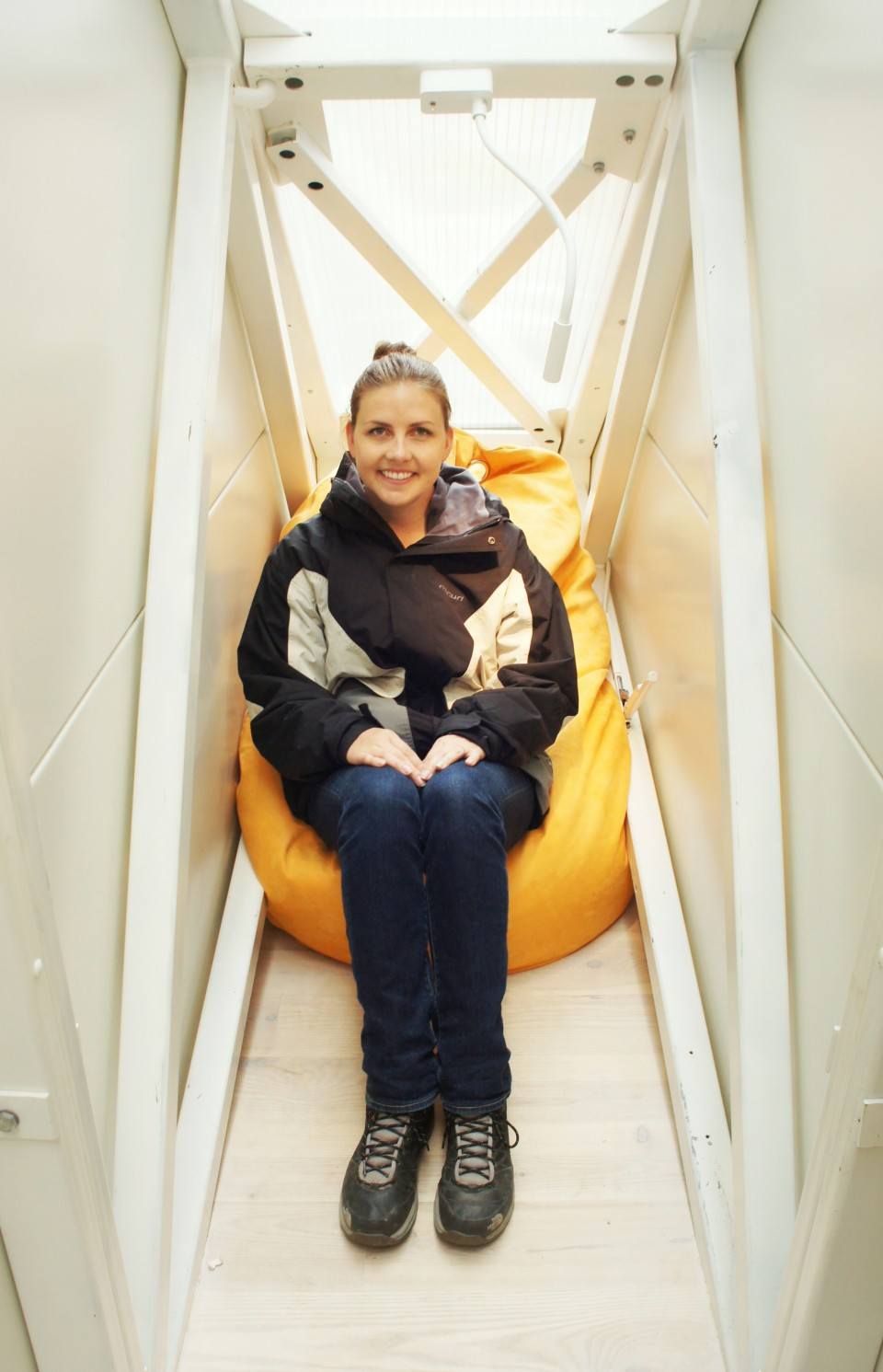 Turn around and you'll find the living area with a comfy bean bag and reading light. 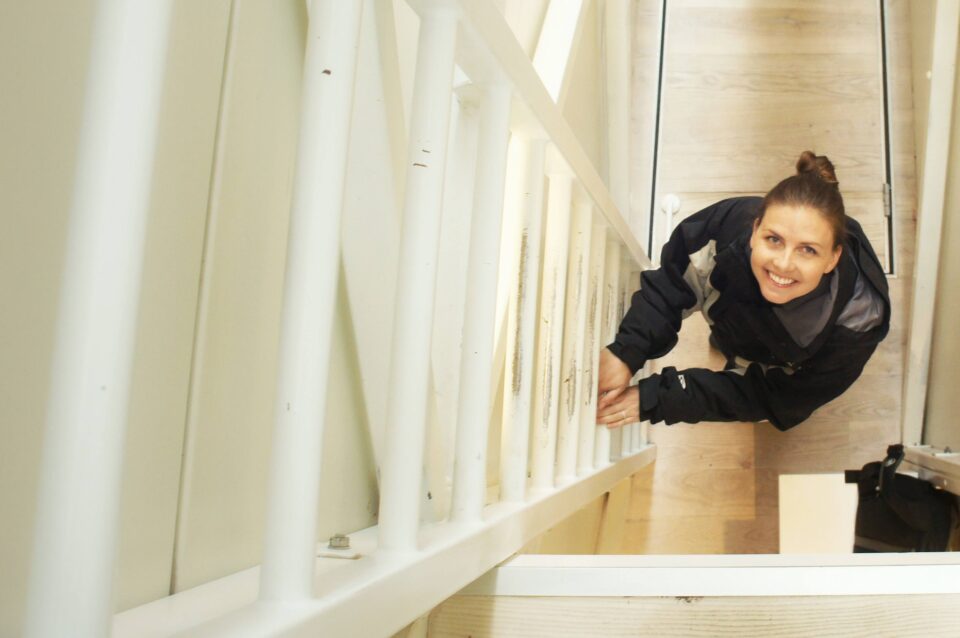 The ladder to the second floor alcove. 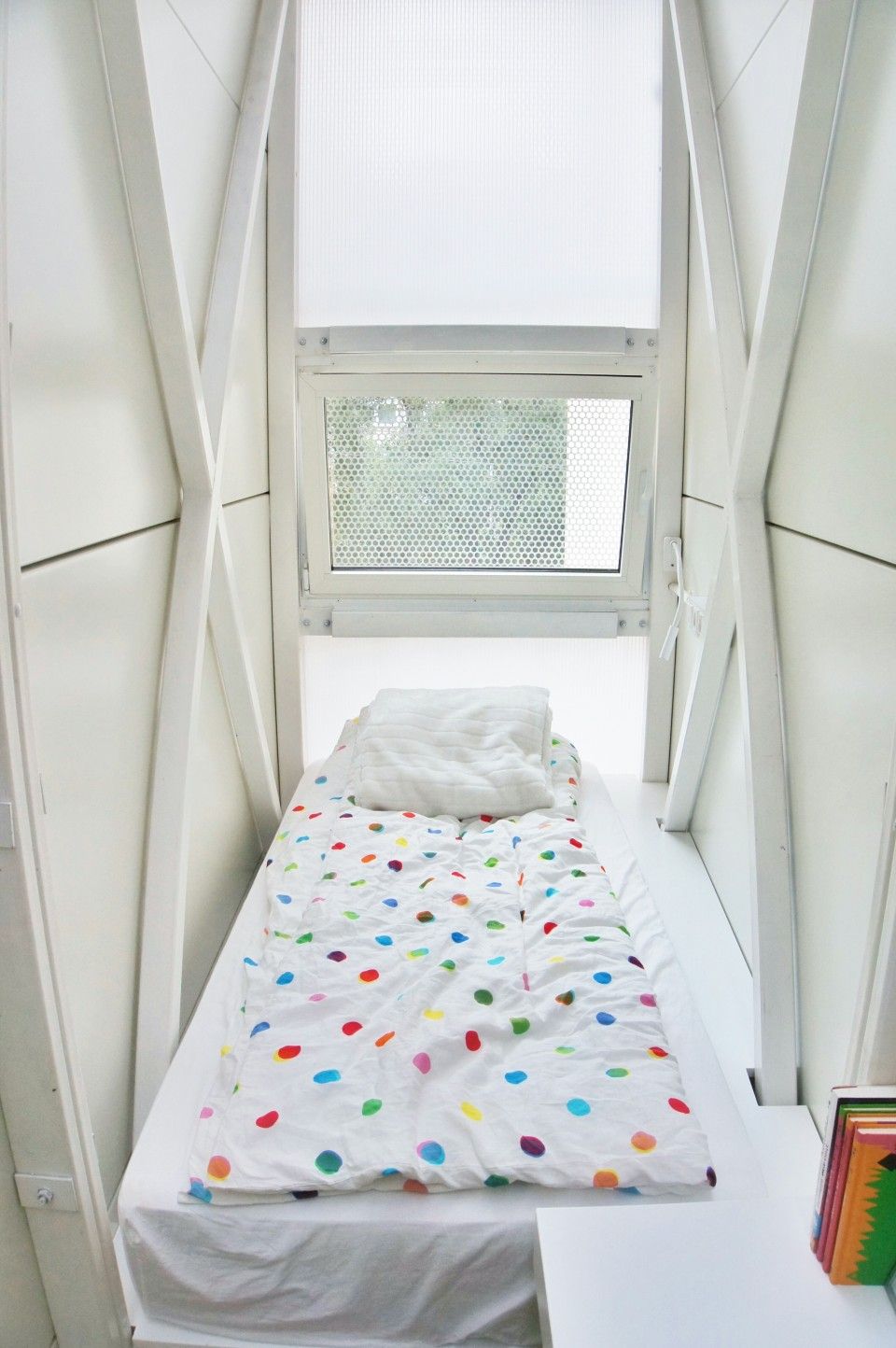 The upstairs alcove houses the bed and desk where the natural light streaming through the window provides for an excellent working space.

Who uses the house? Just as Szczęsny had thought about giving meaning to the voided space, he also gave great thought to who would occupy it; the person who would ultimately give the project meaning by using it. Who would want to live in the thinnest house in the world? Someone with a good sense of humour, someone who would feel at home in the “chaos” of Warsaw's urban landscape, someone who would want to be at the heart of it all, yet secluded. Who better than a creator, a writer. So it was with these thoughts in mind that Szczęsny invited Israeli writer of Polish descent, Edgar Keret, to live and work in the house for a time, and become the ongoing caretaker of the premises.

Keret House now functions as a sanctuary for artists in the fields of architecture, literature, visual arts, music and film. Through its residency program, artists may apply to stay for a period of three weeks, while prominent artists may be invited.

The installation provides an interesting twist to Warsaw's eclectic urban landscape. While wedged in contrast to the buildings around it, which in many ways makes it fit right in, it also acts as a binding element that brings the two buildings together, to “communicate” as Szczęsny would say. Well, it's certainly gotten the conversation started.

If you'd like to see the inside of Keret House for yourself, check out their website for open days and donation information.

The Keret House will be “filling the void” until at least 2016.

Tell us, could you live in the world's thinnest house?

[…] Yes, there is such a thing and it’s in Warsaw! You can go and take pictures of Keret House from the outside anytime, but be sure to check out the open house days to see if they coincide with your visit. For a donation, you’ll be given a tour (2 people at a time – they don’t call it the world’s thinnest house for nothing) and you can get a taste of what it’s like to live there – peer into the bathroom, write a note from the study and even sit on the bed. And people do live there. It’s an artistic haven of sorts where artists of a variety of disciplines can apply or be invited to stay for three week periods. To learn and see more of this fascinating structure, check out our full post on this little known but totally cool attraction. […]

Goodness, I can live in there! Just enough space to accommodate me. And yes, Britt was right, the natural light's awesome, love it! <3

It really is quite an ideal space for one! And the natural light is glorious, isn't it! Perfect for getting some vitamin D and ensuring you don't go crazy while spending your days in there writing. ;)

You should apply to stay, Ruth! I think it would be an awesome experience to write about! :)

Ack! It's like a super skinny shotgun house. How does one move? Sideways?

Hahaha It wasn't THAT cramped for us, but it is definitely a house only built for one!

I am floored by the amount of natural light in there. All I was thinking during those initial photos was...teeny tiny cave!

Of course a writer would live there. I'm totally drawn to it. It's like a modern tree house. So cool!

Yeah, it gives the impression of being gloomy at the stairs, but inside it's like a bright IKEA showroom hahaha

You should totally apply for the residency program, Britt, and write part of your next novel there!

What a lovely place. I've never heard of it. So cute and so tiny, indeed. Love the kitchen!

It's really cute, isn't it?! And yet it's really not that well-known in the local community. All the local people we talked to in Warsaw had never heard about it. "We have the world's thinnest house? That's kinda cool." :) You'll have to visit next time you go back home. :)