Today, on this the 4th anniversary of 3.11, I'd like to keep it simple. Not because I don't still have many more thoughts on it. Trust me, the debate about future plans in the region is more relevant now than ever. But if you don't read anything else about current day Tohoku, I want it to be this.

Come visit. Please. See for yourself.

If 3.11 wasn't already devastating enough, compounding that is the fact that many people are experiencing difficulties getting on with their lives because visitors, for the most part, are simply not going there anymore. That means few jobs, few opportunities, few means to change their situation.

Despite what the media may try to have us believe because bad news sells, Japan is not a dangerous place, nor is it a rotting nuclear wasteland. I'm not suggesting going frolicking in the exclusion zone, but what about all the other areas affected by the events of 3.11 that are completely safe and open for visitors. Yes, including big chunks of Fukushima Prefecture. The word “Fukushima” keeps being bandied around as if the entire prefecture should be avoided, rather than a particular area.

I have no idea how widely reported this was outside of Japan, but some of you may or may not know that Prince William visited the affected region earlier this month and the Founder and Chairman of Tohoku-based NPO It's Not Just Mud (INJM), Jamie El-Banna, got the chance to speak with him (or rather the other way around, I guess). (You may remember that all of the proceeds of our fundraising activities in Tokyo went to this fantastic organization and is a group we wholeheartedly support). 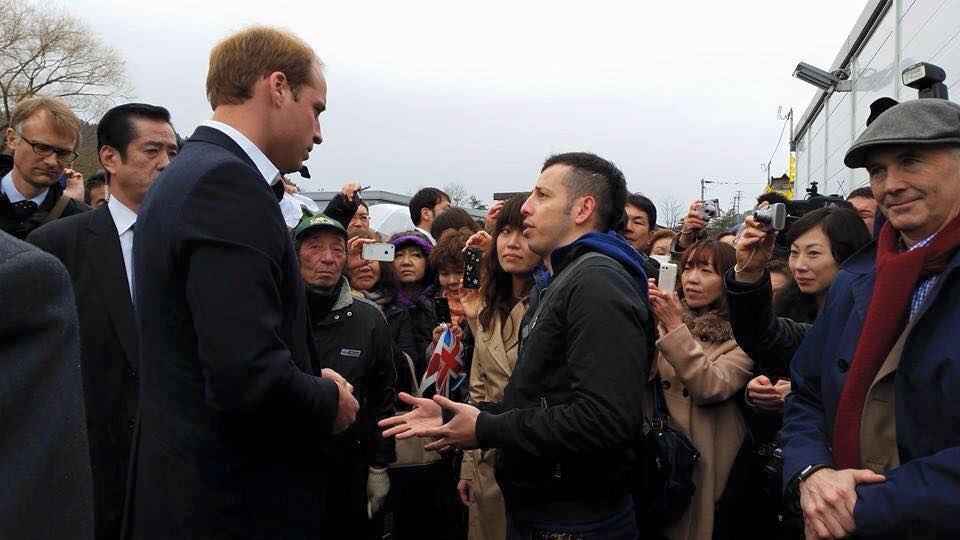 This is an excerpt of what Jamie posted on Facebook later that day.

“As was posted earlier, I (Jamie) was able to have a brief chat with the Prince! As soon as we had finished talking I was mobbed by reporters who were interested to hear what we talked about, and what it was like to talk to royalty. I figure I'd share here as well.

We spoke about what INJM has done up until now, and some other stuff which isn't so interesting. The interesting part is the next bit.

I told him that it was wonderful that he came not only to Ishinomaki/Onagawa, but also to Fukushima.

There are many people who still think Tohoku is dangerous, especially Fukushima. This is a mindset that is held not only by non Japanese but many Japanese people too. The fact that the future King of England came is a real vote of confidence for the region. Hopefully people will adopt the thinking of “If it's safe enough for him, then it's safe enough for me!”

In true English fashion he brushed it off as no big deal, but he said that he felt that the trip to Tohoku was one of the most important parts of his whole trip, and something he had insisted on.

Now, those who know me will know that I'm pretty cynical and really not that into meeting celebrities or even giving interviews (although I have given many…). But for a Royal to come, there is no personal agenda. He doesn't need approval like a politician does, nor does he have an album coming out he's trying to sell. He knows that to many people it is a huge deal that he comes, and I think it gives a real boost to the people in the region. Hopefully others will follow his example and come and visit one of the nicest places in Japan.”

So without saying any more, I invite you to come and experience Tohoku and its warm people for yourself. Spend some of your tourist yen there and see a different, truly wonderful part of Japan. You can create positive change if only you choose to see it.

Great story! Thanks for posting. I missed this in the mainstream media.

Thank you, Autumn! I wish more things like this would get reported on, rather than just doom and gloom stories.

I just watched the documentary Pandora's Promise the other night and it had some good information about radiation. The beach in Brazil had natural radiation higher than that in most places in Japan! I'm relieved at this information because I hope to move to Japan next year and work as a chiro. Just found your blog btw, it's fantastic! www.kimkine.blogspot.com

Hi Kine! Yeah, a lot of fear mongering and misinformation has been presented in the mainstream media. Most people don't realise that we are exposed to radiation in all kinds of ways in everyday life.

Thanks so much for your kind words. Checked out your blog and it's wonderful. Have been meaning to try those Lush solid shampoos! I'm sure you'll love Japan. Be sure to let us know when you get here! :)

Japan will be on my wish list at some point and I hope I can rely on you for more useful information on places to visit. Fukushima and all the places you talk about always trigger my curiosity on a country that is already widely attractive and I hope that by his coming, the Prince will have changed some people's mindset on going or not to Japan and Fukushima area. Thanks again for showing us the great parts of Japan, in spite of what people continue to think, too caught up in what the media want them to believe.

Thank you 'Jul! I certainly hope that his visit will change people's thinking too. It's been a long four years for those in the affected areas and it's time that visitors start returning.

Whenever you come to Japan, we'll be guides at your service. ;)