This past week I received an email that had a profound effect on me. In fact, even as I write this now I'm getting teary eyed. It's probably not the kind of news that affects many people so deeply, but for someone who has been travelling since their teens, getting this kind of message from someone you became close to in those formative years on the road tends to elicit a more emotional response than a reasoned one.

The email was from Sofie, the co-owner of a guesthouse called the Red Palm in Kuala Lumpur. The news was that they had closed their doors for good in February.

Why did this news mean so much to me? Well, let me take you back to 2005 when I was completing my international internship as part of my university studies. Already obsessed with travelling, I chose a course that would allow me to spend as much time abroad as possible. While you didn't have to do your final year internship overseas, it was highly encouraged, and I didn't need to be asked twice. I ended up organising mine with a class mate at an NGO that was addressing issues of violence against women, and promoting women's equality and empowerment in KL.

With the internship organised, the next step was to find an affordable place to stay for the six week stint abroad. Fortunately the friend who I was doing the internship with had some family in Malaysia and we were able to stay with them for the first few days while we worked out our living arrangements for the duration of our trip. That's when we came across the Red Palm. It was ideally located, the price was good and we instantly fell in love with the place and the staff Sofie, Hanis and Kamel. They were even so kind as to offer us an even better rate considering the length of our stay.

The Red Palm was not your average “for profit” business. It was a two-storey house and they treated everyone in it like family. We spent countless evenings eating together in the communal kitchen and they took me and my friend out many times to show us some of their favourite eats around town. I even remember them cooking this amazing BBQ dinner for everyone outside in the front yard to celebrate one of the guest's birthdays. Thanks to their kindness, anything we needed to arrange during our stay – from getting local SIMs to arranging transport – was all worked out.

I also have them to thank for telling us about one of the most impacting experiences of my young travelling career: the Thaipusam Festival. If you don't know about this festival, it's a Hindu ritual that takes place every January at KL's Batu Caves where devotees essentially work themselves up into a trance and climb the stairs to the Cave's temple with steel hooks and rods pierced through their skin. It was one of those travel moments when I just stood there and thought, if nothing else becomes of this trip, to have been here and witnessed this has made the cost of getting here more than worth it. I wish I had photos to show you but back then I had a film camera (remember those days!) and all of the prints are in a box somewhere in Australia. I'm now dying to get back there with Hai one day for him to photograph it.

Thanks to my friends at the Red Palm, I feel an instant comfort in KL in a way that I can't say about too many cities around the world. When our most recent round-the-world trip had us travelling to KL, I told Hai that I had to go back to the Red Palm and introduce him to my Malaysian family. I sent them an email explaining who I was and hoping they'd remember me eight years later. I got a quick response back from Sofie saying that of course they remembered and couldn't wait to see me and meet my husband.

Hai and I made our way to the Red Palm based on my memory of the streets alone. I allowed the sights and smells to guide me, and for the fond memories to come flooding back. I got confused when I couldn't find the Indian restaurant that we used to use as a reminder of which street to turn down, but eventually the pull of familiarity lead us in the right direction and there we were in front of the white house with the red door and small number 5. No sign, like before. I liked it that way. It was just like coming home.

Sometimes there is great comfort in knowing that some things never change and the interior of the Red Palm was exactly how I remembered it. Kamel was on the computer by the front desk, just as he usually was. We chatted for ages about when I was there last and what's been happening since. “Oh, the Indian restaurant closed a couple of years back,” he explained.

Soon Sofie and Hanis were back too and it was time for the evening meal. It was Ramadan and with sunset upon us, they invited us to break fast together. In the kitchen, I wasn't surprised to find another regular guest joining us. Once you get to know these guys, you won't feel the need to search for any other accommodation whenever you're back in KL. We caught up and reminisced, and Sofie couldn't stop laughing when she recounted that time my friend and I went to a hair salon to get our hair straightened for a ridiculous price and it was all frizzy again in the humid heat the next day!

We had the opportunity to go out to one of their favourite places for dinner the following evening too and I was so glad that Hai was finally able to get to know them. Hai and I were already dating at the time when I went on that first trip to Malaysia and it was over the lines at the communal computers at the Red Palm that I first heard him say, “I love you.” The rest is history, as they say.

I had known that guest numbers had been a bit up and down, but to hear that the decision to close had been made still left me feeling shocked. In some ways it isn't surprising considering they only have five rooms and it's not expensive to stay. But at the same time, I often wondered why, because of those very reasons, they were not always at full capacity and the most in-demand guest house in KL. They had everything an independent traveller could ever want in a hostel and more. With the rising costs to keep the business open, however, it was no longer feasible to continue on this way.

Significantly increasing their rates or going full-scale promotional wasn't them, and that's exactly why I and the 17,000 other guests who have stayed over the past 10 years love them. They were genuine in everything they did for you. I loved the small scale of this place, its cozy and welcoming feel, and that no matter how long you were gone for, it still felt like home.

I guess this news came at a time when I'm strongly feeling the loss of so many awesome small businesses. I was really upset to hear that the authentic sushi place I recommended in Tokyo on this blog a couple of years ago has now closed its doors too due to rising rent costs and now another Tokyo cafe I recommended has also recently stopped serving food and transformed into a retail shop for similar reasons. I feel like I'm running out of all my best recommendations!

Sofie, Hanis and Kamel, what can I say but THANK YOU for the most wonderful memories. I'm deeply saddened to hear that more people the world over won't get the opportunity to have the amazing experience of staying with you at the Red Palm like I did. Whatever you do next, I'm sure you'll continue to spread joy and happiness to those around you. See you next time we're in KL! 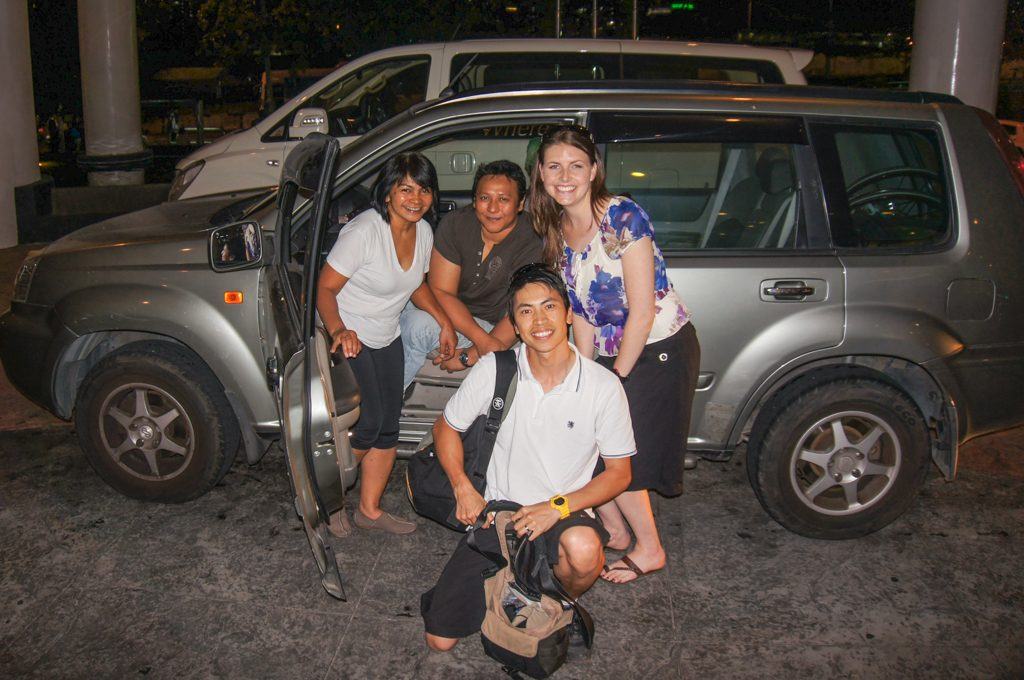 Hanging out with Sofie and Hanis, July 2013.

It's always so heart-breaking to hear such news, specially with the great memories you have of the place and people who made it so alive. It's so sad that such a beautiful place had to close and that your friends now have to think of another way to earn their living... Makes me think of all those little businesses, bookstores, markets, and hostals, all those places that make people want to travel more, discover more, feel at home away from home that are threatened to close because of transnational firms... We need to support the former, not the latter; we need to aim for them because they're the ones being "human" still!

Yes, we need to hold onto and support these small businesses that make the world a better place with every opportunity we get!

How sad, I'm sorry to have missed the chance to stay there. I hope your friends are onto bigger and better things!

Unfortunately I know all too well what you're feeling. When I read last year that the wonderfully historic town of Shangri-la, China had burned down, I was devastated to the point of tears. We spent a week there the year before and fell in love with the place and its people. And now it's all gone. It just breaks my heart. But that's the beauty of travel - of getting to find these places and meet these people that make such an impact on our lives.

"You will never be completely at home again, because part of your heart always will be elsewhere. That is the price you pay for the richness of loving and knowing people in more than one place." ~ Miriam Adeney <3