If you're looking for the perfect place for a little Japanese seaside getaway with great food, a dramatic coastline and the friendliest locals, the Sanriku coast of Iwate is not only largely undiscovered by foreign tourists, it's got a heart that you'll remember long after your trip. The kind you find beating in the inaka – Japanese countryside – and that remains remarkably strong even in the wake of great adversity.

Iwate is Japan's second largest prefecture, equivalent to the size of the entire island of Shikoku, home to four of Japan's forty-seven prefectures! At the same time, it maintains the second lowest population density in the country. On both fronts, Iwate is second only to the huge northern island of Hokkaido. In short, the prefecture is blessed with ample space and few crowds, all just a couple of hours' north of Tokyo by bullet train.

Iwate is part of the Tohoku region and is one of the prefectures that was severely impacted by the 2011 Great East Japan Earthquake and subsequent tsunami. While it has naturally taken time for the prefecture to prepare for the return of tourism, Iwate is now ready and waiting for visitors to once again experience its rich culture and natural beauty, and also its reconstruction progress firsthand.

Visiting Iwate and the Sanriku coast not only assists in the reconstruction of the area, but also builds a new narrative for the region, one that focuses on what it has to offer, rather than what it has lost.

This year, 2019, couldn't be a more exciting time to visit Iwate prefecture and here's why. 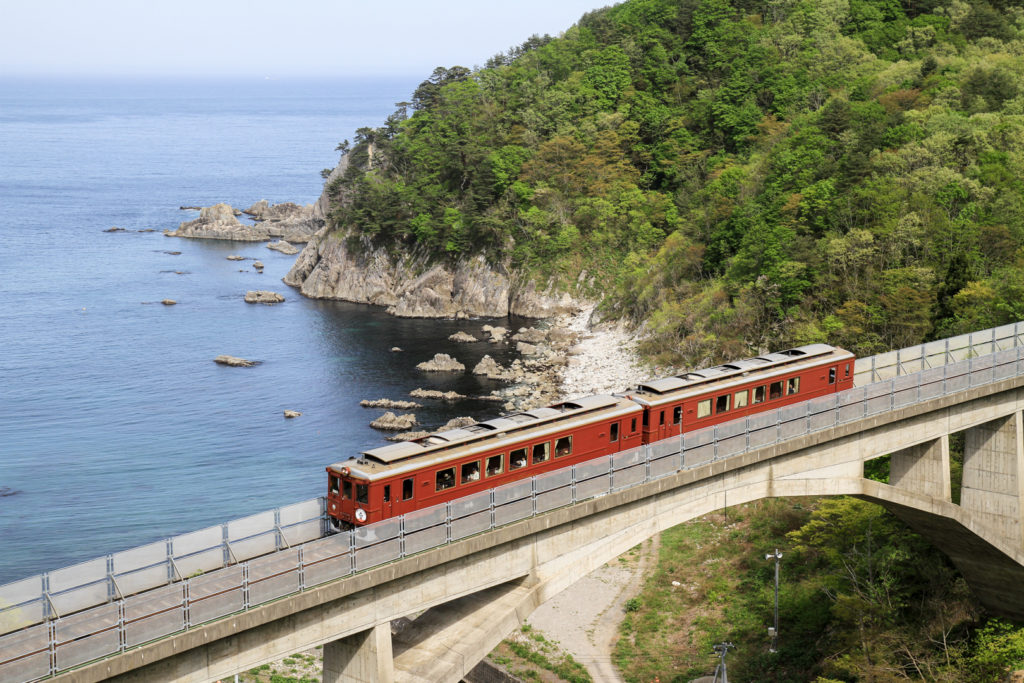 Iwate is literally back on track with the grand opening of Sanriku Railway's Rias Line on 23 March 2019. Prior to the 2011 earthquake and tsunami, the Sanriku Railway had two lines – the northern Kita Rias and the southern Minami Rias lines.

The railway was massively impacted by the disaster, but both tracks were fully reopened by April 2014. The middle section that connected the two lines, a line run by Japan Railway (JR), however, was irreparably damaged and has been out of service for eight years. JR has recently finished rebuilding the line and handed it over to the Sanriku Railway so that all three sections could be connected to form one unbroken 163km-length track.

As of late March 2019, visitors can now enjoy Iwate's stunning coastal views on the newly renamed Rias line all the way from Kuji in the north to Ofunato (Sakari) in the south, without the need to transfer. Not only is this a significant move towards unity and recovery, but it's dramatically improved access for visitors.

The railway also offers special seasonal train services, such as the “Kotatsu Train”, in which you can have the cosy Japanese winter experience of sitting under a heated table covered with a blanket, and the “Zashiki Train”, which features carriages with tatami seating.

The 2019 Rugby World Cup in Japan will be a special event. Not only will it be the first time for the event to be held in Asia, it will also be an opportunity for visitors to experience the excitement all across the country.

Japan will be spreading out tournament games over 12 different host cities – with Kamaishi in Iwate being one of them. Kamaishi has a special connection to rugby as the local Nippon Steel Corporation team, nicknamed the “Northern Iron Men” for their incredible strength, and who were predecessors to the current local rugby team, the Kamaishi Seawaves, was the first team ever to win seven consecutive All-Japan Rugby Football Championships. 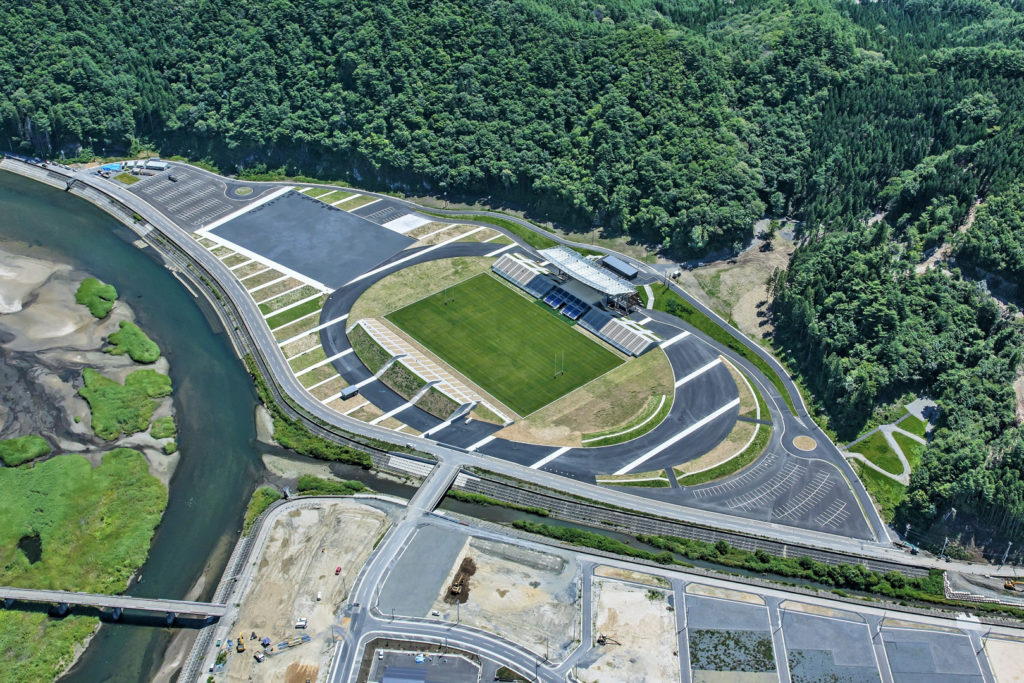 The two World Cup games in Kamaishi will be held at the Kamaishi Unosumai Memorial Stadium (also referred to as the Kamaishi Recovery Memorial Stadium). The stadium has been built on the former grounds of the Kamaishi Higashi Junior High School and Unosumai Elementary School. All six hundred students at school at the time of the 2011 earthquake and tsunami survived.

The junior high school students took the initiative to evacuate immediately after the initial quake, prompting the elementary school students as well as local residents to follow them. All working together, hand-in-hand, they made it to the evacuation point, and then made the call their location wasn't safe enough and evacuated to even higher ground, a decision that saved their lives. This story is often referred to as the ‘Miracle of Kamaishi' and is a telling reminder about the importance of exercising leadership, and not becoming complacent and relying on past disasters as your precedent. 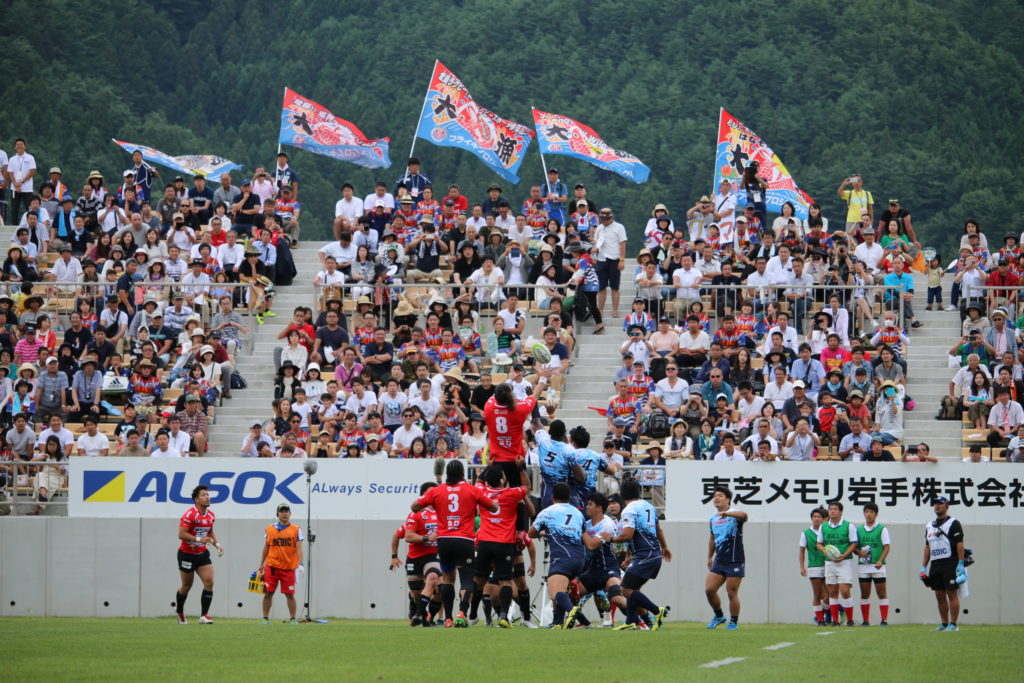 The Kamaishi Unosumai Memorial Stadium, which opened in the summer of 2018, now stands as a proud monument to the area's recovery and resilience. While it is the smallest stadium being used during the 2019 Rugby World Cup, at 6,000 seats and another 10,000 temporary seats being added for the event, it will no doubt be one of the more special locations to support.

Those who miss out on tickets can still enjoy matches on the big screen in the ‘Fan Zone' at Shimin Hall on game days throughout the World Cup. No prior registration or tickets required.

Takata-Matsubara Reconstruction Memorial Park – a place to remember and rejuvenate

Rikuzentakata City's Takata-Matsubara Reconstruction Memorial Park, or the Iwate Tsunami Memorial as it is informally referred to, will soon become a significant symbol of disaster recovery in the region.

Rikuzentakata was one of the hardest hit areas during the 2011 earthquake and tsunami, with its city center virtually being wiped off the map. With the tsunami debris now cleared and the land raised by some 10-12 meters, the task of planning and rebuilding a city from the ground up is currently underway, and the Iwate Tsunami Memorial is a big initial step in that direction. 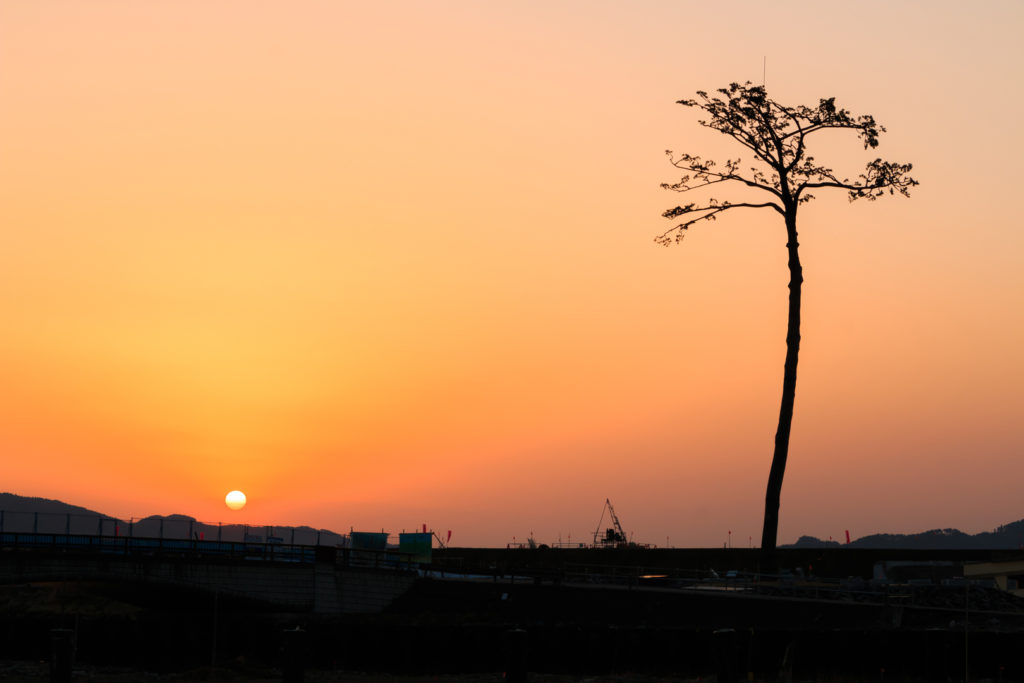 Before the disaster, Rikuzentakata was known for the Takata Matsubara, a two kilometer-long stretch of shoreline covered by around 70,000 pine trees. It was ranked among the top 100 landscapes of Japan and many believed that the pine forest would act as a natural defense in the case of a tsunami. Unfortunately, the tsunami washed away all of the pine trees bar one. Now known as the ‘Miracle Lone Pine Tree', the 27-meter-tall, 200-year-old specimen, has become a symbol of hope during these very difficult years since the disaster. Sadly, the tree is no longer alive, perishing due to salt toxicity eighteen months after the tsunami. However, it was removed temporarily, the original trunk preserved, and then reinstalled with replica branches as a memorial to the disaster victims, and continues to stand tall among the reconstruction efforts.

The ‘Miracle Pine' along with three other ruins (the Michi-no-Eki roadside station “Tapic 45”, Kesen Middle School, and a 5-story apartment building) will remain along the shoreline and become part of the new Takata-Matsubara Reconstruction Memorial Park. The former Michi-no-eki with food and shops is being rebuilt and a new Iwate Tsunami Memorial Museum, or Tsunami Denshoukan, meaning a place to pass down information, is currently being constructed.

Both the Michi-no-eki and the Iwate Tsunami Memorial Museum will be opened in September 2019, just ahead of the Rugby World Cup. The rest of the park is set to open before the Tokyo 2020 Olympics.

The Michinoku Coastal Trail presents one of the most exciting recent developments in Japan for outdoor enthusiasts and coastal lovers. Spanning from Hachinohe in Aomori to Soma in Fukushima and covering the entire length of Iwate and Miyagi prefectures in between, it's more than 900km of dramatic and topographically intriguing Sanriku coastline. 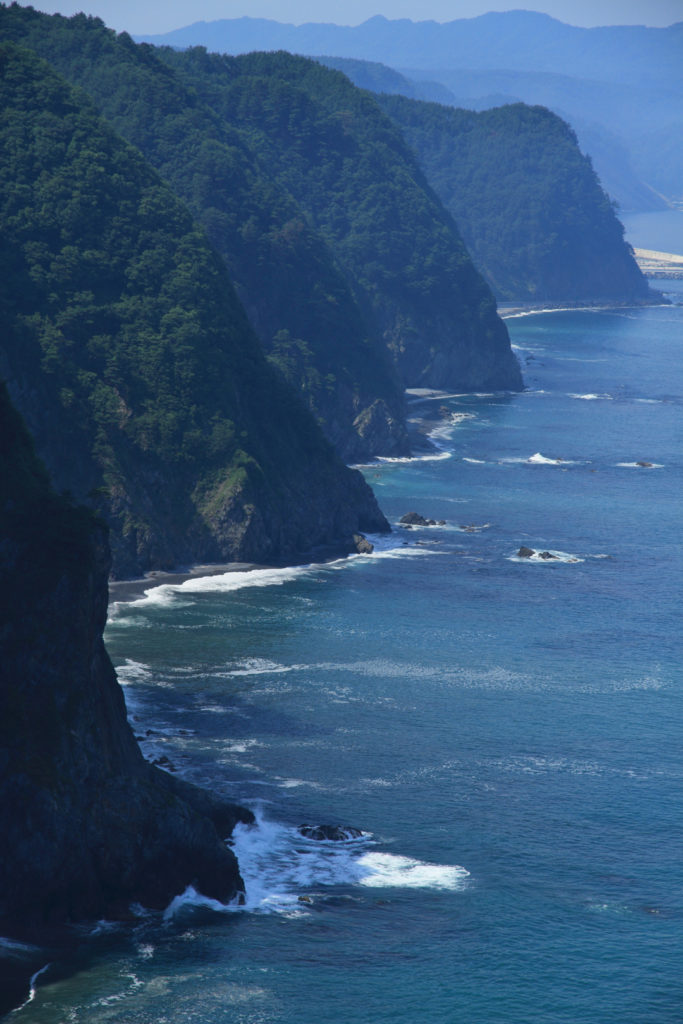 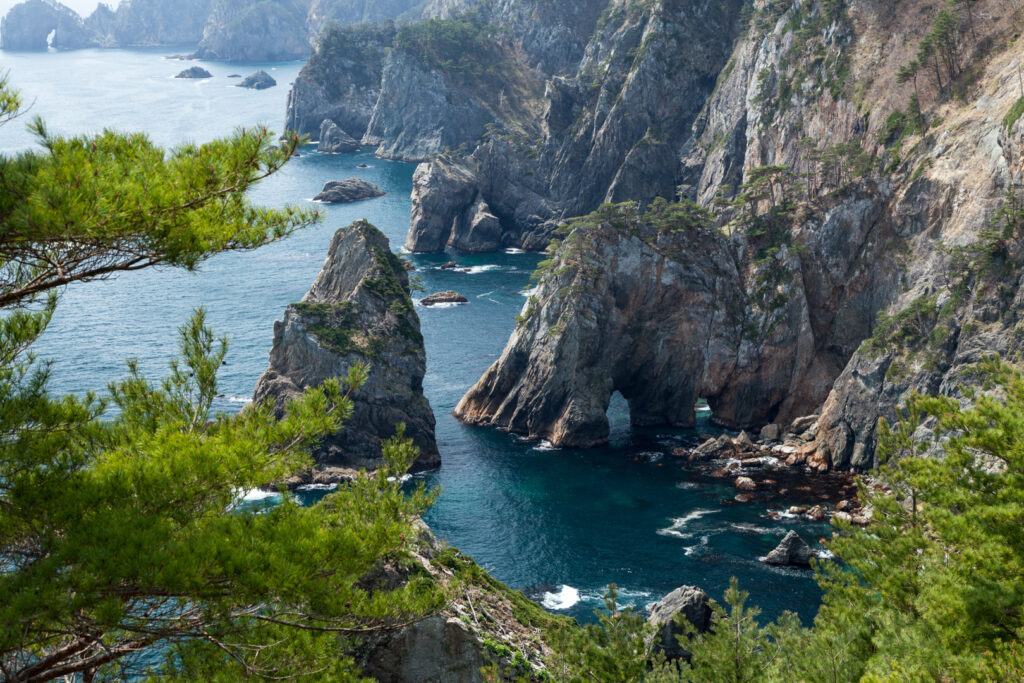 Walking the trail from end to end takes around two months. However, if you don't have the time or inclination for that, you can simply choose a section of the trail that interests you. Fortunately the Ministry of the Environment makes that really easy with an impressive Michinoku Coastal Trail English website that details the sections of the trail and its unique topography, distance and average walking times, scenic spots and points of interest along the way, and official camping grounds. It also includes up-to-date information on periodic trail maintenance and closures, and any other details pertaining to the trail and hikers. 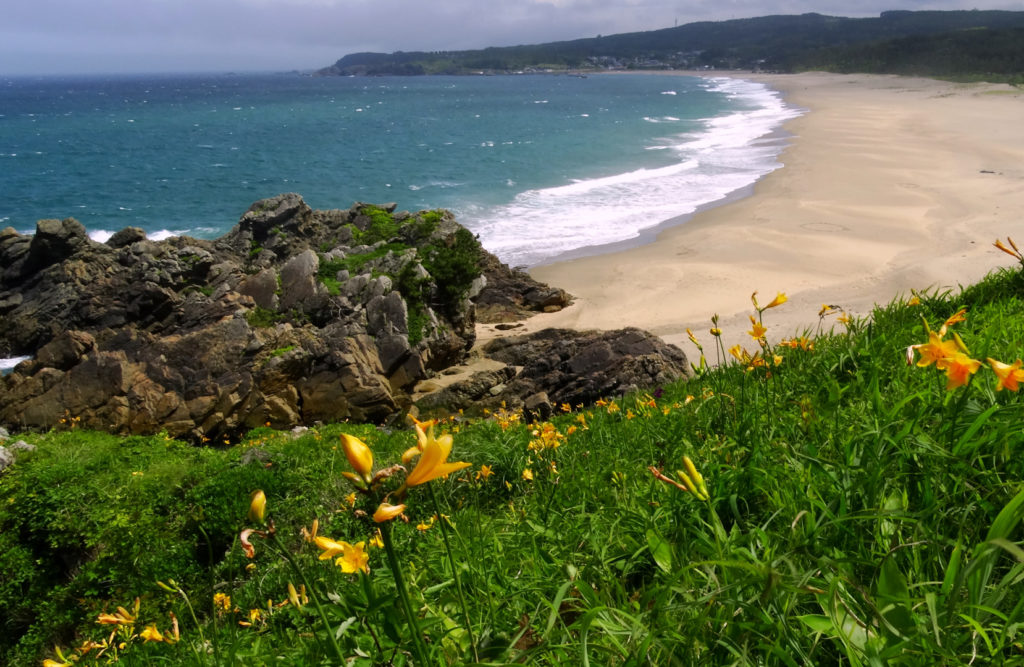 Another useful resource is that of Explore Tohoku and their new Michinoku Trail website, which includes first-hand tips and videos from the trail, and additional accommodation options.

The full length of the Michinoku Coastal Trail will officially open in June 2019.

In the summer of 2019, Iwate will be hosting 68 days of events showcasing what the region has to offer and the progression of reconstruction efforts as part of the 2019 Sanriku Disaster Risk Reduction & Reconstruction Project.

Thirteen cities and towns on the Sanriku coast of Iwate will participate and will host a wide variety of interesting activities. Visitors can enjoy making specialties of the region such as locally produced fish sausage and sake bottles made of squid, and udon, soba and rice cakes at special cooking events. 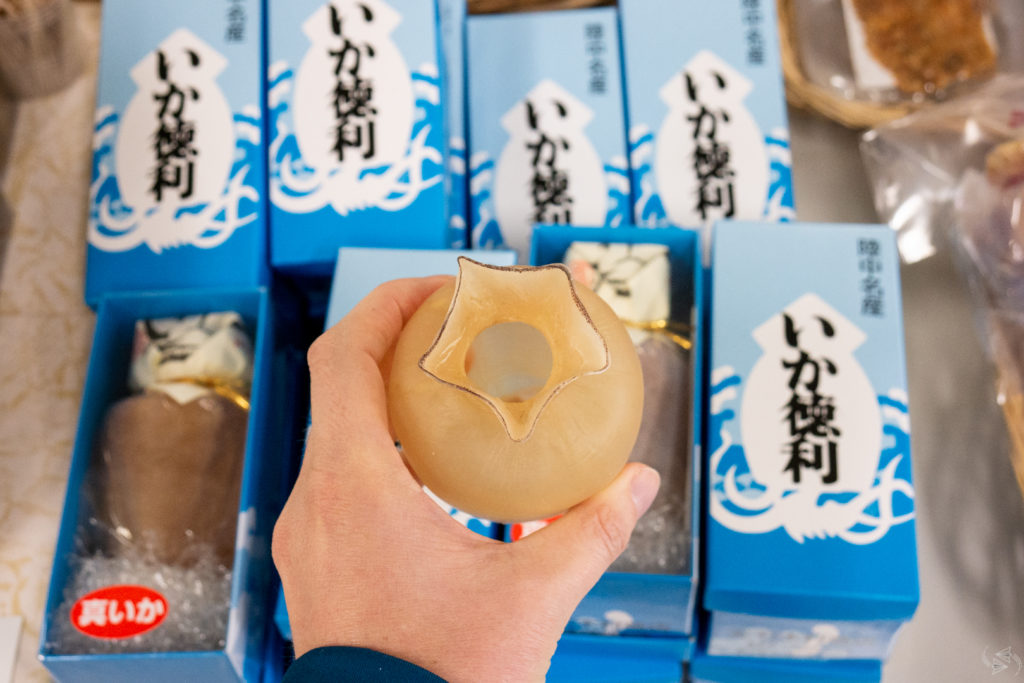 Ika no Tokkuri, sake flasks made from dried squid, a specialty item of Iwate, that you can eat after using 2-3 times.

There will also be arts and culture activities such as Kuromori Kagura performances (a type of traditional folk dance), cruises on a Yakatabune boat in Ofunato Bay and a Goyo Mountain Samurai Matchlock Rifle Performance Group show, with the added bonus of trying on samurai armor afterwards.

For those who'd like to sample the incredible natural land and seascape of the Sanriku Coast, there will be guided walking and trekking tours on offer, and the chance to search for gold and amber. And visitors wanting to learn more about the disasters of 2011, reconstruction efforts and disaster education can participate in various workshops and guided tours.

This is just a small sampling of some of the activities awaiting visitors as part of this summer of special events. The Sanriku Disaster Risk Reduction & Reconstruction Project will take place from June 1 – August 7, 2019. See their official website (linked above) for more information about the project, scheduled events and how to get there.

Will you be visiting Iwate in 2019 and beyond? Which activity from this list most excites you? If you have any other Iwate travel advice or favorite things to do in Iwate, feel free to add them in the comments!

This trip was supported by the Iwate Prefectural Government. As always, our opinions remain our own. 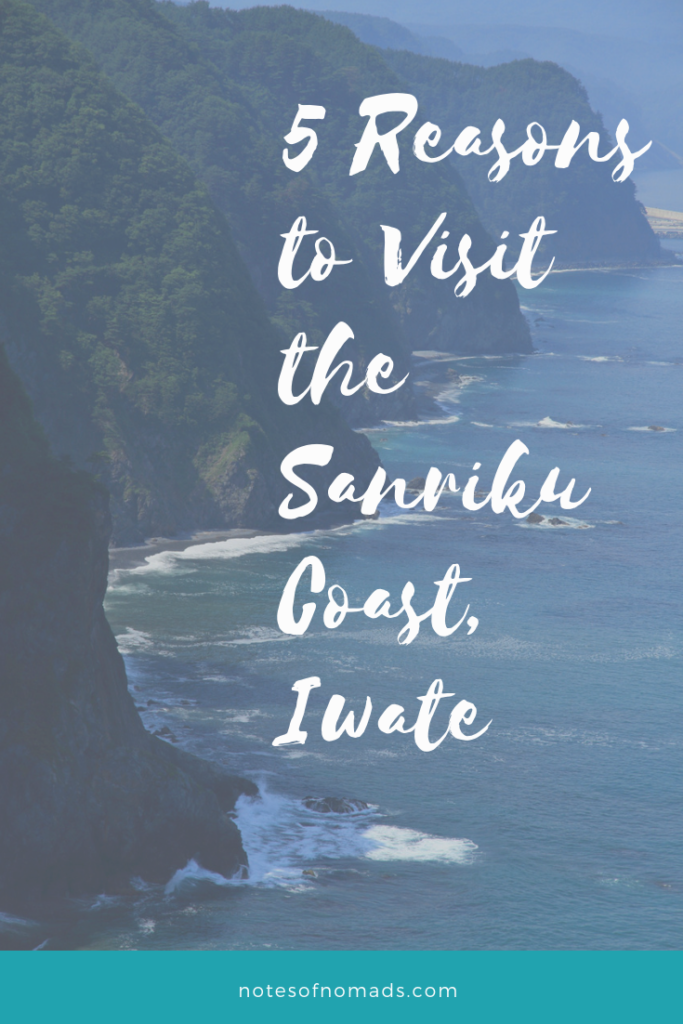