Inu no Hi, literally meaning the ‘Day of the Dog,' is an important pregnancy ritual and rite of passage for pregnant women in Japan.

As dogs are widely believed to have easy and uncomplicated births as well as large litters, dogs are considered to be a symbol of smooth delivery and an animal deity of sorts for safe childbirth and fertility.

That's why in Japan you'll find images of dogs on many maternity products and websites. They aren't there just to look cute!

What is Inu no Hi exactly?

Inu no Hi is a day when pregnant women (and their partners and families) visit a shrine to pray for a safe childbirth.

While pregnant women (and anyone who wishes to pray on their behalf) may visit a shrine anytime for anzan kigan (safe birth prayers) and purchase special omamori (amulets) for a safe delivery, Inu no Hi's association with dogs and easy labour has given rise to its own special customs.

Inu no Hi is celebrated during the 5th month of pregnancy (between 16 and 20 weeks).

Unlike in many Western cultures, where pregnancy is often publicly announced at 12 weeks, in Japan, this is usually done at the 16 week mark. Once a pregnancy has reached this point, it is considered that the most critical danger period has passed. However, the timing of Inu no Hi is also and more often associated with the fact that a pregnant woman will generally start developing an obvious bump during this period and will customarily start wearing a belly or maternity band at this time.

Essentially we can say that Inu no Hi is the day when pregnant women traditionally start wearing a ‘haraobi‘ (pregnancy wrap or band). It is used to help support that growing baby bump and relieve issues with posture and backache, but it is also fundamentally associated with keeping the baby ‘warm' and to ‘protect' the baby from a knock or fall.

The idea and benefit of keeping your belly and the baby warm is a very strong cultural custom in Japan that is advocated through the pre-natal care system and belief systems passed from mother to daughter. Hospitals and clinics will show pregnant women how to tie them around this time in the pregnancy, and they are often expected to wear them even in the height of summer.

When is Inu no Hi?

The dog is one of the twelve animals of the Chinese zodiac, on which the traditional Japanese calendar is based. According to this belief system, not only are years assigned an animal, but every single day of the year is, too. Just like years, they repeat on a 12 day cycle.

Therefore depending on the calendar for that month, there may be two or three ‘Days of the Dog' each month.

Intertwined with this is Rokuyou (六曜), the six day calendar system of lucky and unlucky days. It is used for planning wedding days and all manner of important events in which you want luck on your side, like starting a business.

The most auspicious of all the Rokuyou days is Taian (大安), or day of ‘great peace'. It is believed that on this day all things proceed well.

This means that when Inu no Hi also falls on Taian, it's considered a particularly auspicious day to commemorate this pregnancy rite of passage. As such, you'll often find shrines more crowded on these days, along with any Inu no Hi that falls on a weekend. If you're trying to beat the crowds, especially at the more popular shrines, then a weekday is usually your best bet.

You can find Inu on Hi calendars (戌の日カレンダー) easily online. Many maternity websites feature them as a resource for expectant mothers and of course to promote their maternity belt range.

Inu no Hi that are also Taian days are usually denoted by a different colour or special mark to help you time your visit if you wish to (in the above example, the Taian days have a heart mark). Although it should be noted that most months won't have any ‘dog days' that fall on Taian, so you have to be lucky for one to occur during your 5th month of pregnancy.

My Inu no Hi Experience

I was extremely fortunate to do my Inu no Hi on May 1st, 2019. Not only was it a Taian day, but it was also the very first day of the new Reiwa era in Japan and the ascension of the new Emperor, so it was a very auspicious day all round.

It did mean that the shrine was extra busy, since it was also a national holiday, but there was a celebratory mood in the air and the shrine was prepared for the crowds with plenty of staff and carefully managed lines.

We went to Suitengu, the most popular shrine in Tokyo to pray for a safe childbirth. One of the enshrined deities at Suitengu is Suijin, the Shinto god of water. Suijin is revered for having power over fertility and safe delivery, and also to protect children from drowning.

What can you do at Suitengu Shrine on Inu no Hi

Of course, you can do the usual thing you do at a shrine, which is to offer a prayer. But in addition to that, there are other practices and rituals associated with a smooth childbirth, that are also popular.

One is to buy a pregnancy pack that contains auspicious objects. These particular packs are specific to Suitengu, so they will likely vary depending on where you go. Some places may not have packs at all, and you can buy some (or possibly all) of these items separately.

At Suitengu Shrine, they offer two packs. Both options were 4,000 yen (roughly US$40). I decided on the one containing the traditional maternity girdle, a 5-meter-long piece of cotton cloth. I've heard of some being 10 meters in length, which seem like an epic task to tie!

There are a number of words that are used for slightly different types of maternity wraps – you might hear terms like haraobi, fukutai, haramaki and sarashi. At Suitengu Shrine, they offer a belt called ‘mizusu obi' (御子守帯) that has been blessed at the shrine. While I am no expert on the specific differences between them, essentially they are all varying types of maternity belts with the overriding purpose of providing added support during pregnancy.

In addition to the mizusu obi, my pack also contained an omamori (lucky charm) for safe childbirth, a plaque to hang in either the kamidana, home altar, or in a high place at home, and a charm that is worn by the grandmother at the baby's first shrine visit.

Participate in a special blessing

Another option is to participate in a special blessing ceremony. At Suitengu, this costs an additional 8,000 yen ($80). Only one person may participate, so this is usually the expectant mother.

With a piece of paper with my name and address on it, I was directed to a room downstairs. There I handed the paper to the staff who wrote my name in Japanese calligraphy and I was given a numbered ticket.

This number is your group number. When your number is called, all the women in that group proceed in single file inside the shrine (this area is usually off limits to the general public). When I got to the front, the shrine priest collected my calligraphy paper and handed me a small bottle of sake in a box, presumably to enjoy after the birth.

I was in a group of about 30 expectant mothers and the ceremony lasted probably around 10-15 minutes, and involved chanting, prayer and being blessed by the priest one-by-one.

I took a closer look at the sake at home later and inside the box was a set of stickers, a small bamboo basket and an explanation. The bottle was actually in the shape of a dog and the stickers were to decorate it with! The explanation said that it was a ‘lucky dog' for childbirth, in reference of course to the association of dogs with a safe delivery.

Then it said that by combining the kanji character for ‘dog' (犬) and the kanji for ‘bamboo' (竹), it looks like the character for ‘smile' or ‘laugh' (笑). So by putting the bamboo basket on the dog's head, you are symbolically creating the kanji for laughter. They go on to say that this has the meaning of 『笑いがたえないように』(May the smiles/laughter never stop).

Visiting this statue of a dog and her pup is almost a mandatory stop at Suitengu Shrine. Expect a line as almost everyone wants to get a photo here.

You can throw a coin in the box and pray to either be blessed with child or for safe delivery. You then rub the heads of the mother and pup, and then rub one of the twelve zodiac signs around them. If you are already expecting, you rub the one corresponding to the year your child will be born in. If you're hoping to become pregnant, rubbing your own zodiac sign is said to aid fertility.

Overall, participating in Inu no Hi was a fascinating experience that gave me further insight into Japanese pregnancy culture. It was interesting to witness so many pregnant women in the one place and it's one of those times when you question whether Japan's birth rate is really declining!

Since Australia doesn't really have any pregnancy customs like this, at least not in mainstream Australian culture, I felt fortunate to be able to participate in this before leaving Japan.

Do you have any special pregnancy customs or rites of passage in your culture or know of any interesting ones around the world? 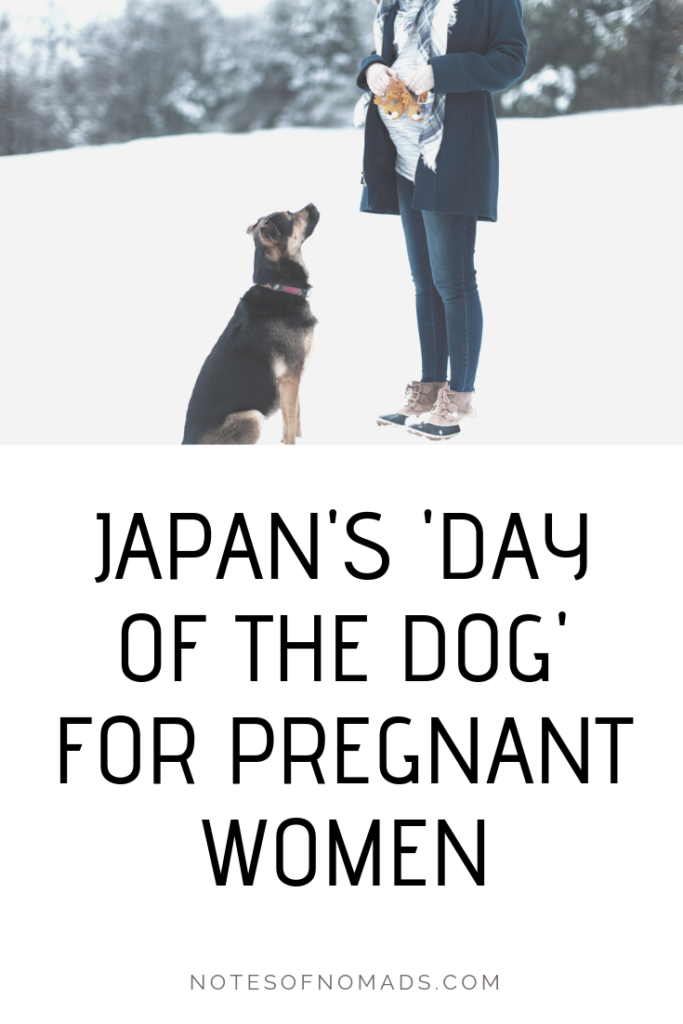 I loved this, super interesting! I want to do this in the coming weeks, but I can’t find a Inu no Hi calendar for 2020 to choose what day to do the prayer on ?

Hi Lisa, so glad you found it interesting! You can actually pray today, May 31st! Or the next dates are June 12th and 24th. I will update the calendar with all the dates for the year in the post too.

Have fun celebrating Inu no Hi and all the best with the remainder of your pregnancy!

As a dog owner I find this ritual particularly intriguing.

Haha It is rather unique and interesting, right? It's fascinating how a small idea, like the belief that dogs generally have less complicated deliveries, can turn into a deeply rooted custom that's observed for generations to come.

Such an interesting ritual! Again, Japan has a way of looking at life moments with an utterly different perspective, it's so invigorating to read! Thanks for sharing!

Thank you so much, Jul'! There is literally a day or custom for everything - and I love that about Japan!

Next pregnancy update is coming very soon! Time is flying by fast now, so it's important to make a deliberate effort to enjoy the small moments. Writing them down also helps me reflect and to see how much things have changed from month to month.

Hope you are well and enjoying warmer weather where you are! Much love x

This was such a delight to read. I love the Japanese culture and it's always fun to learn more of the details, even if I'm not likely to be pregnant any time soon lol. Hope yours is progressing smoothly. Alison

Thank you, Alison! I find all of these Japanese rituals so fascinating as well, so I enjoy sharing them. My pregnancy is going well, thank you. I'm writing my next pregnancy update as we speak (can't believe it's already been three months since the last!).

Thank you so much for following along on our adventures!