Almost two years after the earthquake/tsunami that triggered the Japanese nuclear disaster, those from the Fukushima exclusion zone remain refugees. It's a little known fact that approximately 170 people from Futaba who were forceably evacuated from their homes because of their proximity to the Fukushima Daiichi nuclear power plant, are still living in an emergency shelter in Saitama prefecture north of Tokyo.

With nowhere to go, the mostly elderly residents are forced to live in an abandoned school building, sleeping in old classrooms shared with others, their only privacy that which can be created with cardboard boxes. No cooking facilities mean they are forced to buy ¥350 (US$4) cold pre-packaged meals three times a day and heat them in a microwave.

Earlier this month, I visited the center, joining other volunteers to cook them a proper hot meal and to provide some festive treats, and to generally let them know that they hadn't been forgotten.

While all of the evacuees were grateful for the special meal, for most the social interaction was a little overwhelming, opting to take some food and take it back to their rooms. As you can imagine, after two years of shelter life and no timeline of when they can return to their homes, morale is low. However, for those who were up for some company, we were there to lend a shoulder and an ear, and to generally spread a little Christmas cheer.

There was music and wreath-making and a large donation of blankets from the Matsushima Relief Fund, such a necessity in the freezing school building. We had gathered together some small Christmas gifts, which we left on a table for them to choose whichever they liked. There is something so quietly rewarding about watching a scene like this from afar – seeing someone pick up one of your gifts and their reaction as they opened it. Their smiles warmed my heart.

Yet, to be honest, I felt a sense of sadness for much of my time there that weighed heavily on me, and at times had me holding back tears. To see people in such a desperate situation, that even the smallest amount of food was prized, was difficult to see. The evacuees had bought cardboard boxes down to the former cafeteria where we were located, into which they placed servings of the food and treats – some for now and whatever they could get for later.

A few times when I looked up from making onigiri (rice balls), I caught the eye of someone stacking cookies or pickles into their box. I would try to show them warmth through my eyes and smile. They would always ask if it was OK. “Of course, take as many as you like,” I would reply. Nobody was rude or taking any more than their share, yet you could feel that many felt ashamed to ask for the food directly, hence their subdued movements trying not to make a scene about it. The disaster had taken away any independence that their age had not, a depressing side-effect not to be underestimated.

Of all things, the rice balls were the most sort-after item. Volunteers had brought along four rice cookers from their own homes, as there weren't any cooking facilities there. We had them going constantly our entire visit, but it was difficult to keep up with demand. We were literally waiting by the rice cooker when there was 1 more minute of cooking time to go and then we'd assume our positions – one person would pour the rice into a mixing bowl, another would go put another batch of rice on, while another mixed in some seasoning, and a few others were waiting with sheets of plastic wrap to receive a portion of hot rice and mold it into the usual triangle shape. We had received orders and many were willing to wait an hour just to get one to supplement the mediocre boxed dinner they would get later, and then be charged for the privilege of receiving it.

One volunteer asked one of the elderly evacuees if there was anything she would like her to bring next time she comes. The old lady went silent and said “What do I want….? I just want to go home.”

The mayor of Futaba-cho, who was also evacuated to this same emergency shelter, has been to Geneva to report to the United Nations about their situation and the Japanese Government's severe lack of assistance to nuclear disaster victims.

This was the third time that Intrepid Model Adventures had arranged for volunteers to go to the shelter and prepare a hot meal. They are now planning to make it a monthly occurrence so that evacuees have something to look forward to each month.

If you are in Japan and interested in getting involved, please send us an email via our Contact Page, and we'd be happy to introduce you. If you are not in Japan to participate directly, there is one very important thing you can do: spread the word about the existence of this shelter and lack of assistance to all victims of this disaster by the Japanese Government – in this shelter and otherwise. 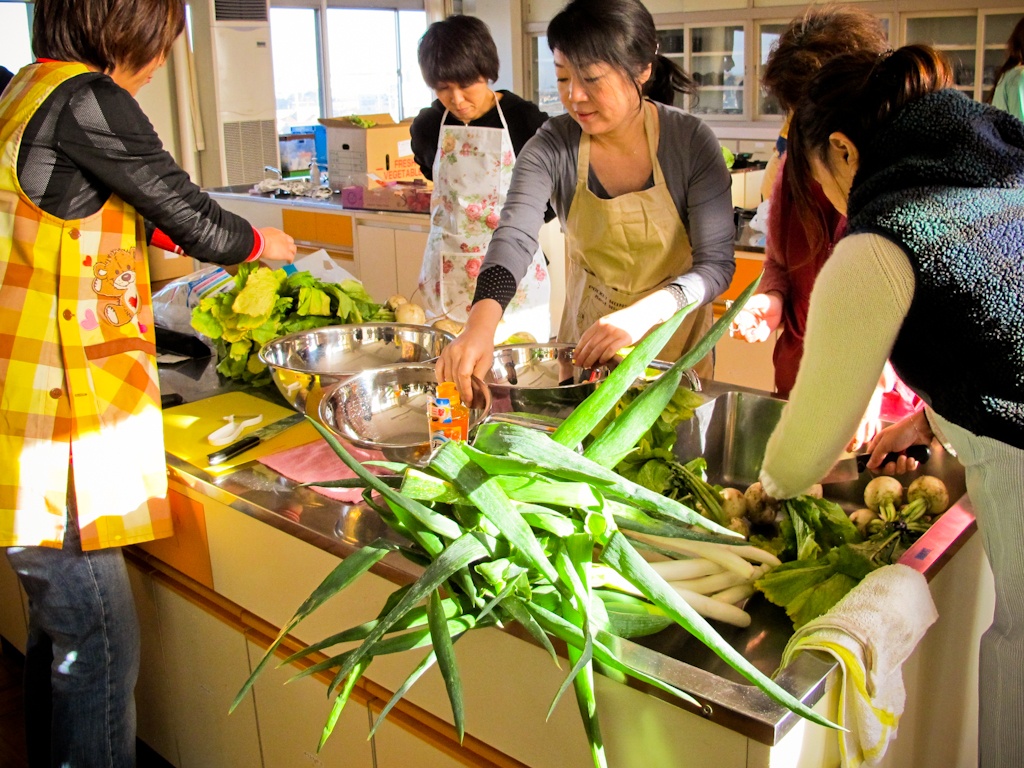 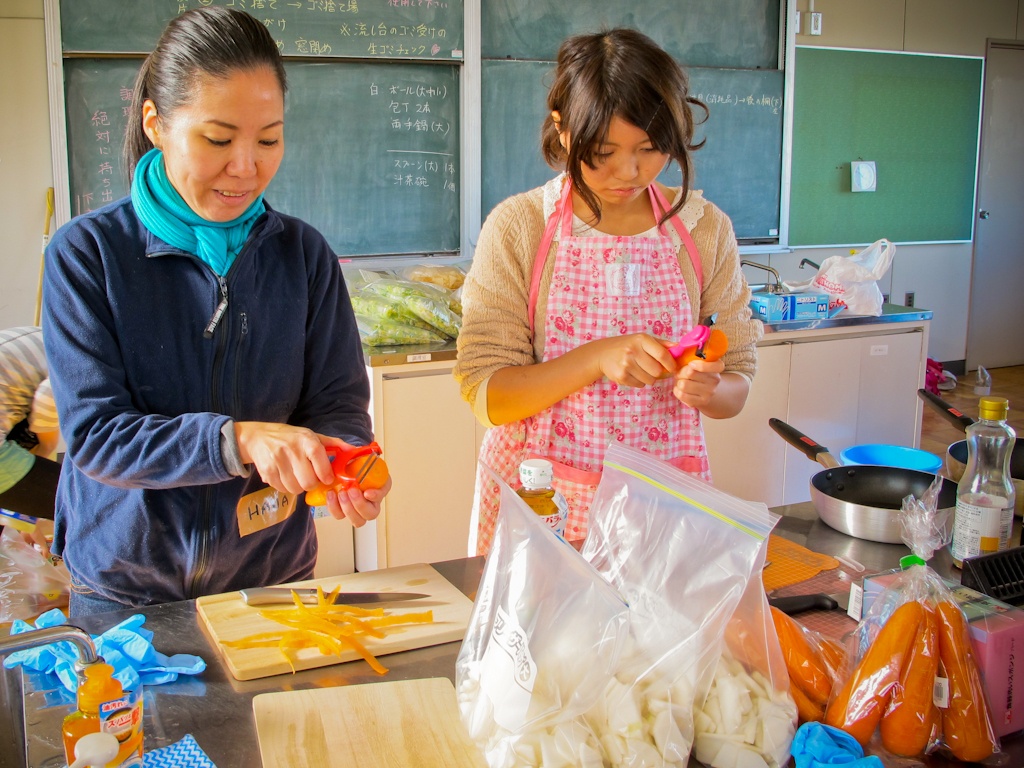 Peeling carrots for pickling – did you know that in Japan they have a dressing that pickles them in 30 minutes? 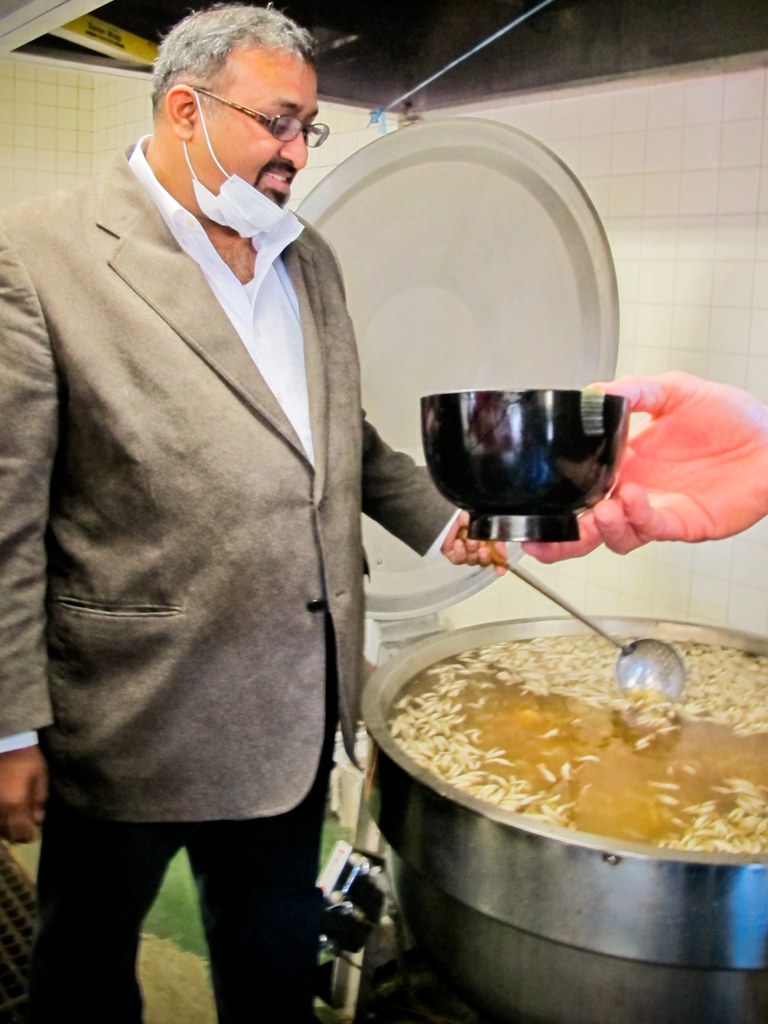 I think that was the biggest pot of soup I have ever seen! This is a soup from Tohoku – some comfort food from home for the evacuees. 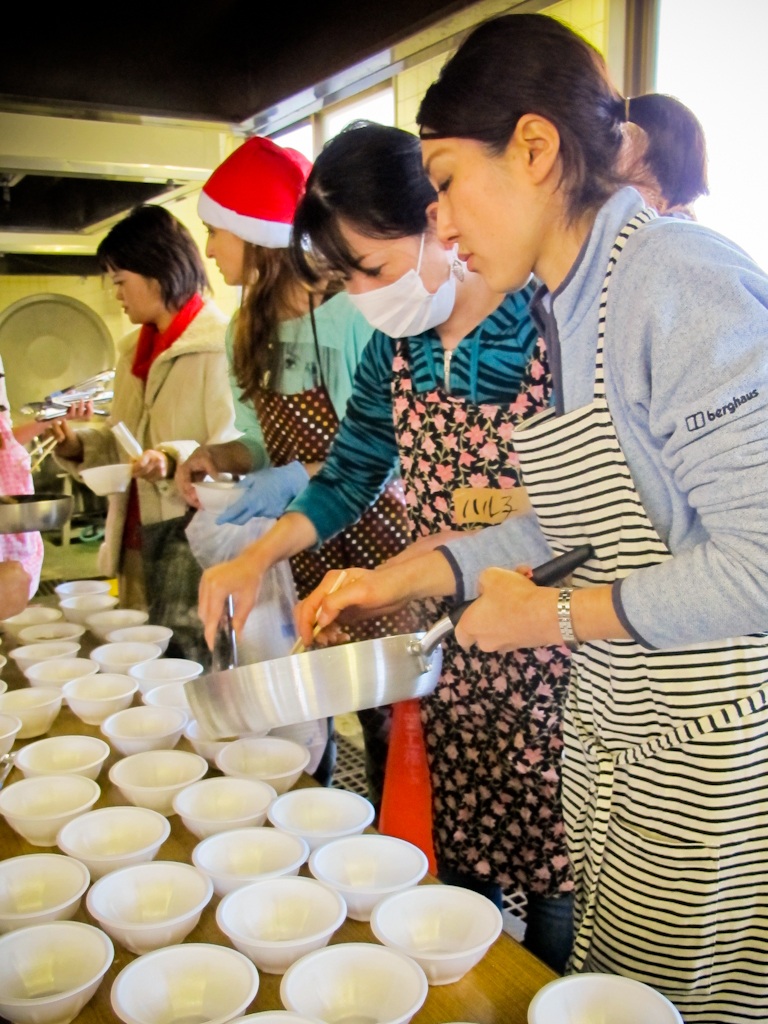 Serving the pork and cabbage stir-fry. 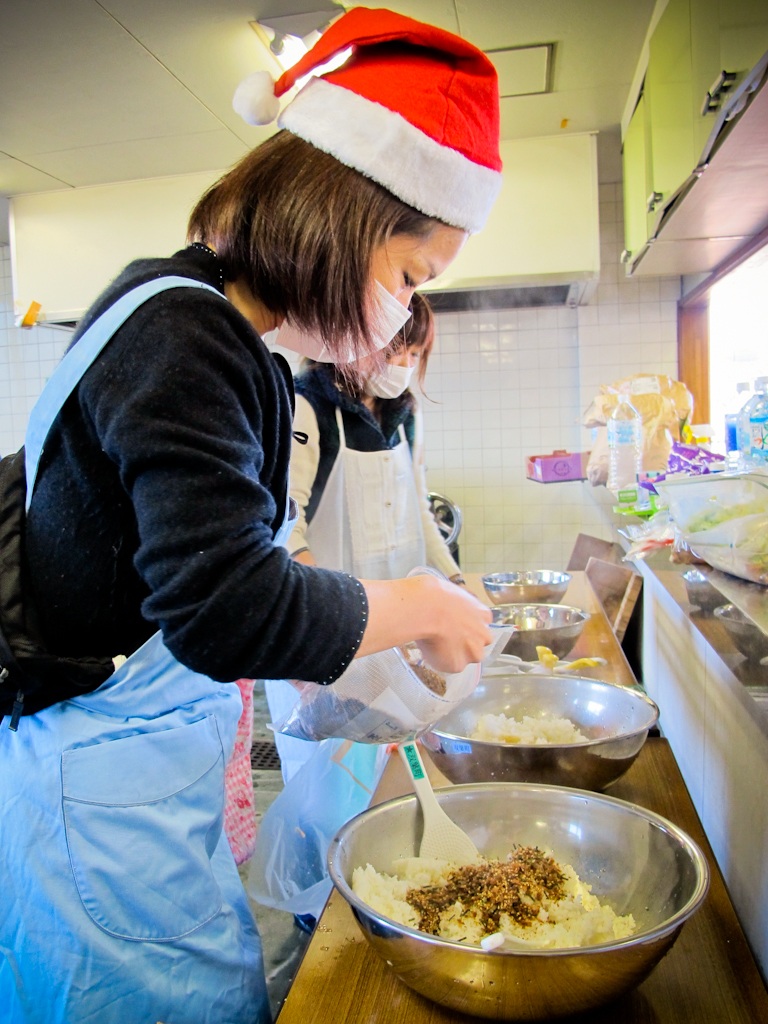 Making onigiri (rice balls) fresh out of the rice cooker. 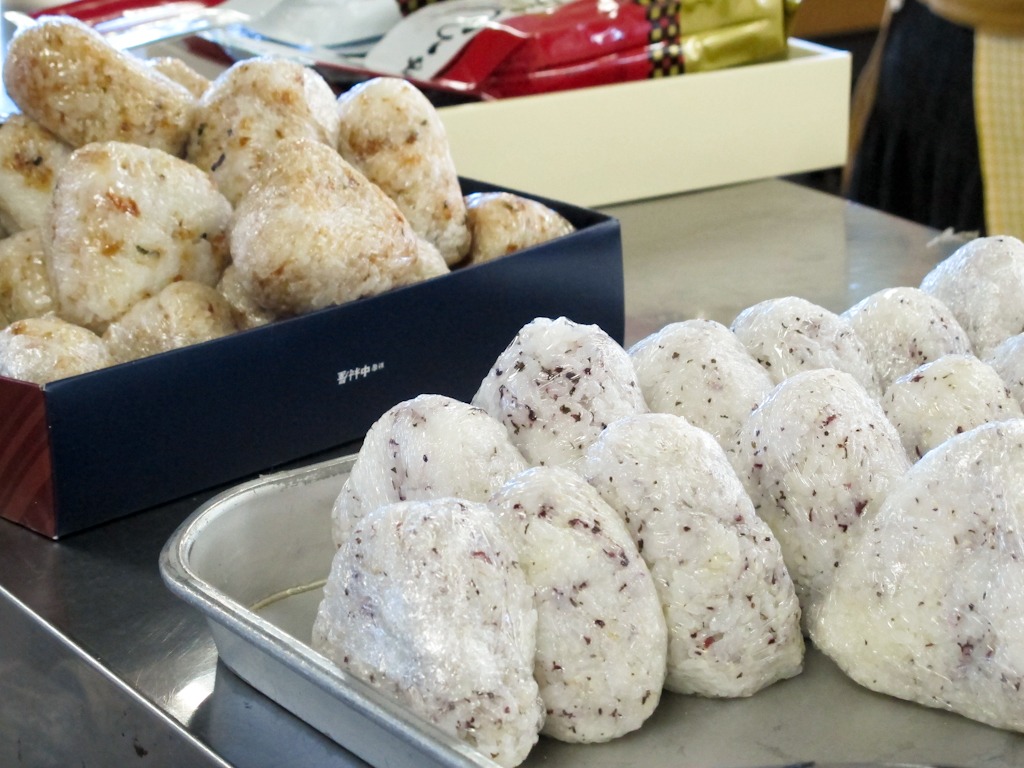 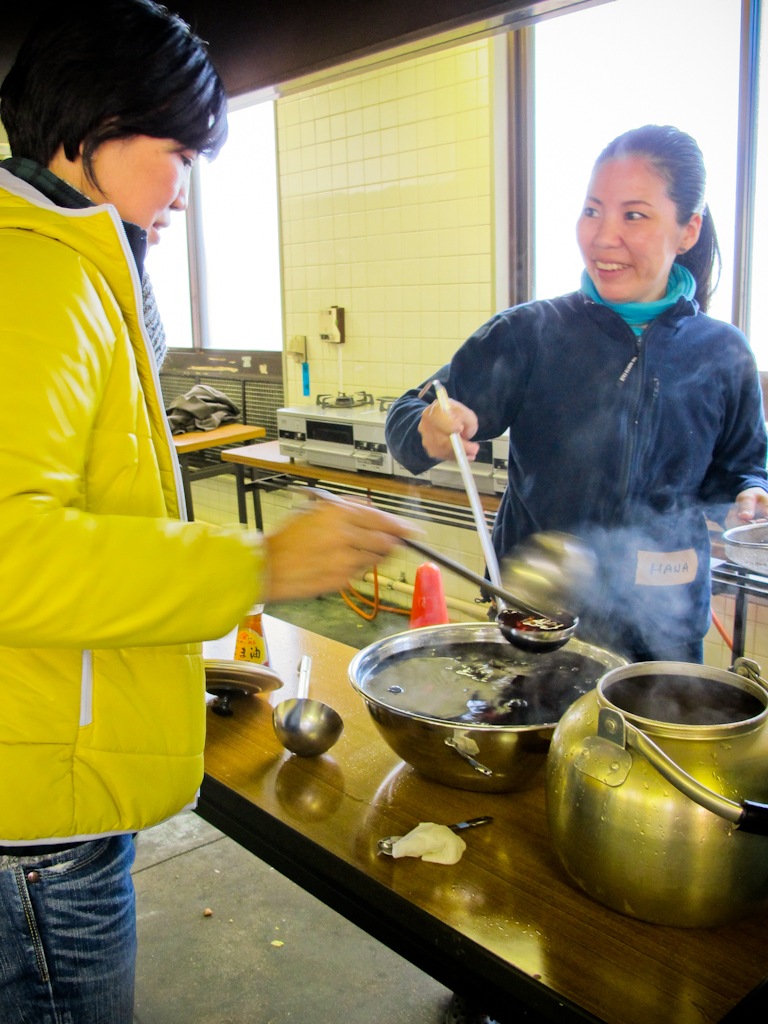 Now that's a pot of tea! 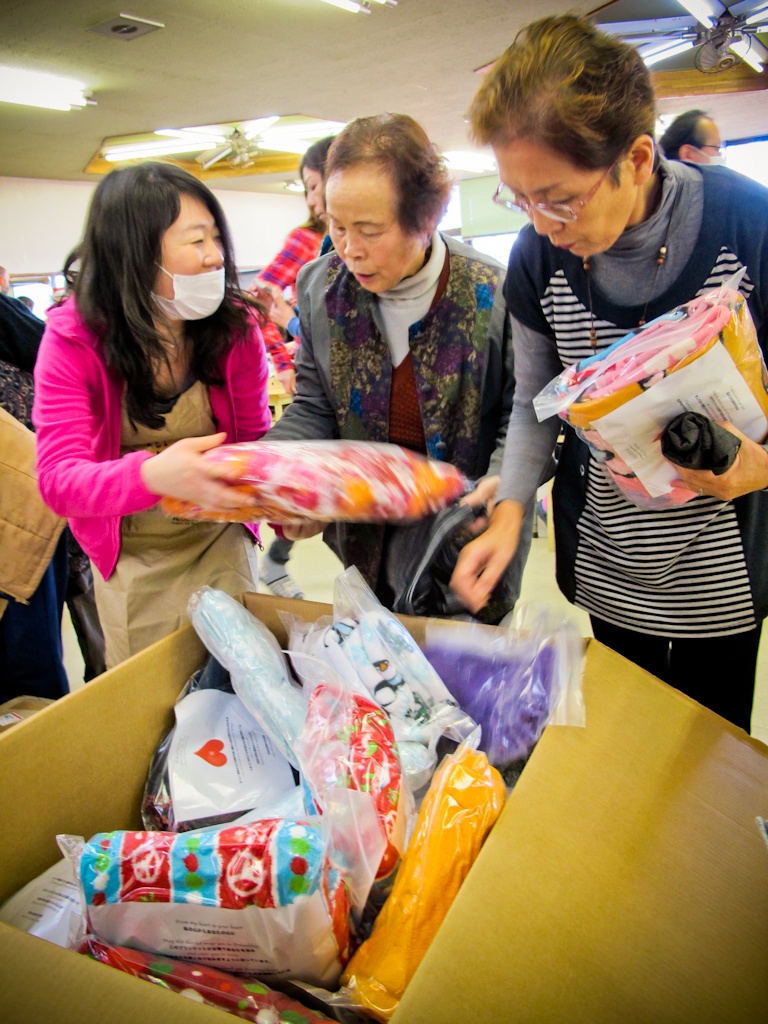 One of the volunteers helps evacuees pick out a free blanket donated by the Matsushima Relief Fund. 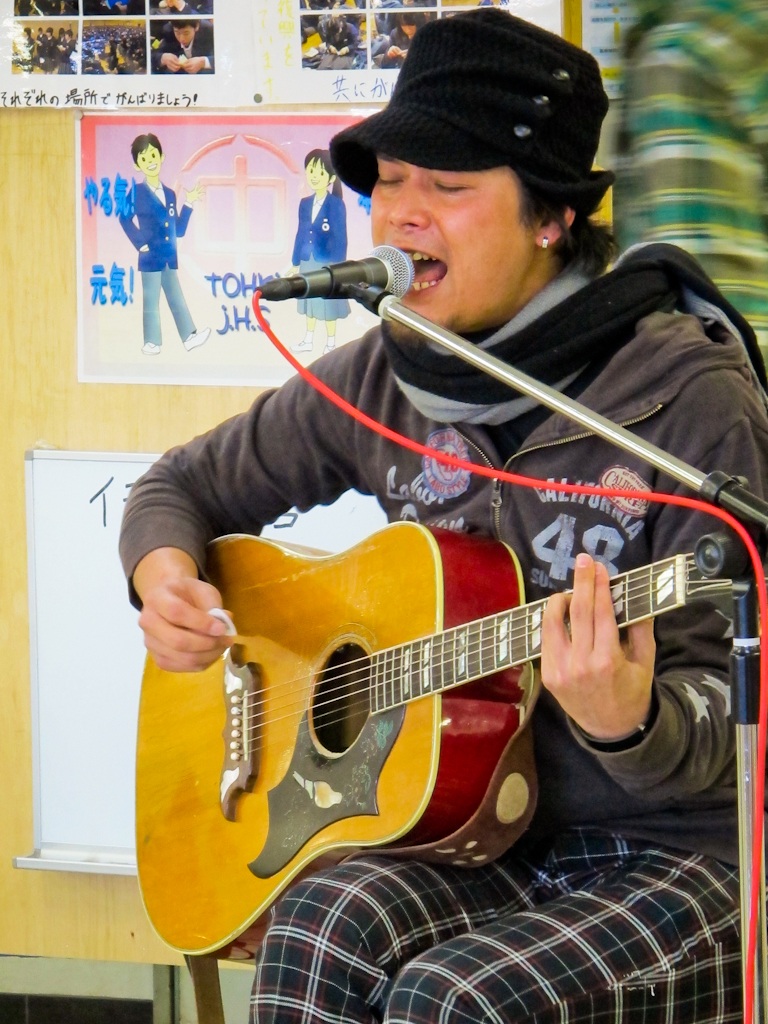 Some musical entertainment to get into the festive spirit. 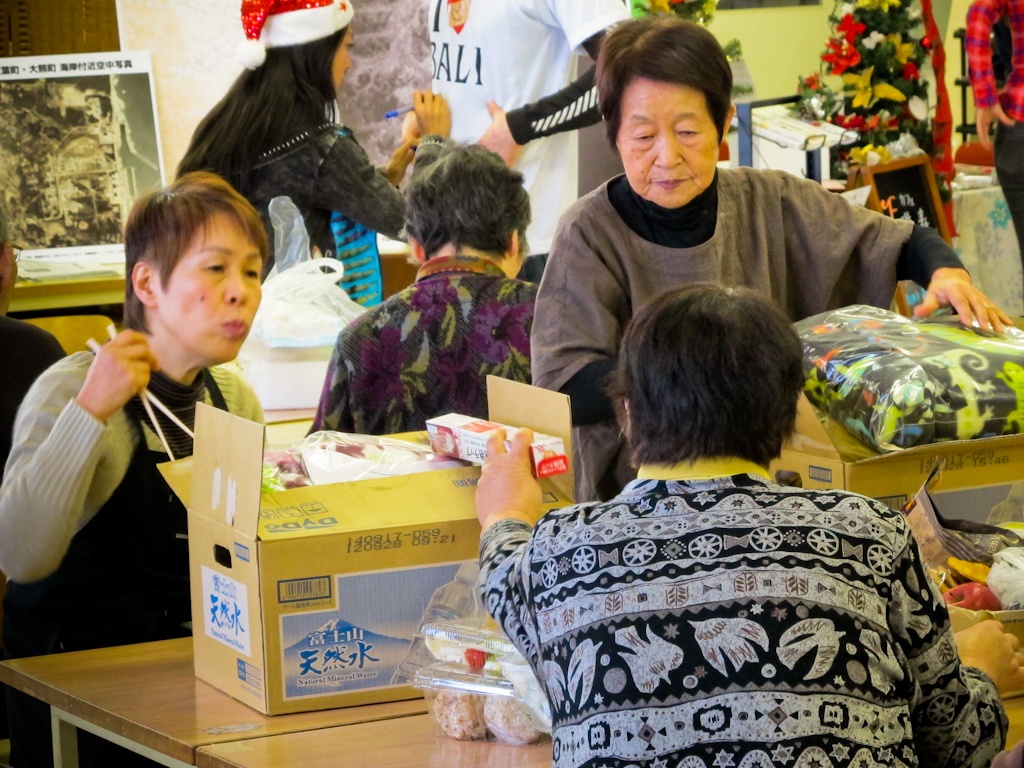 Evacuees with their boxes of supplies from the gathering. 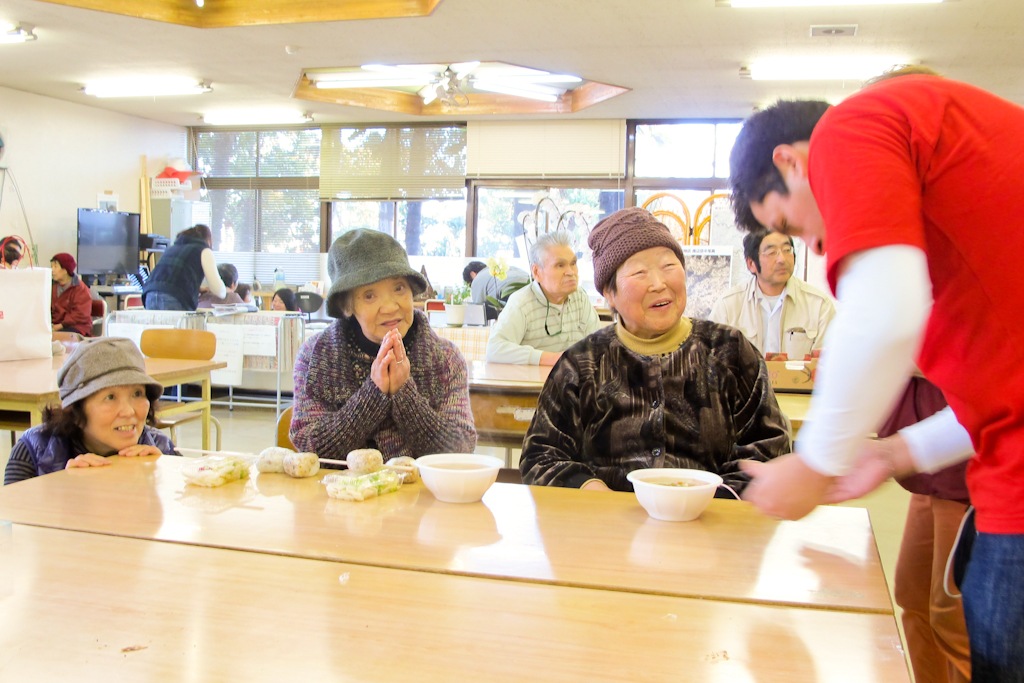 Always warm and gracious, evacuees were grateful for a change of menu. 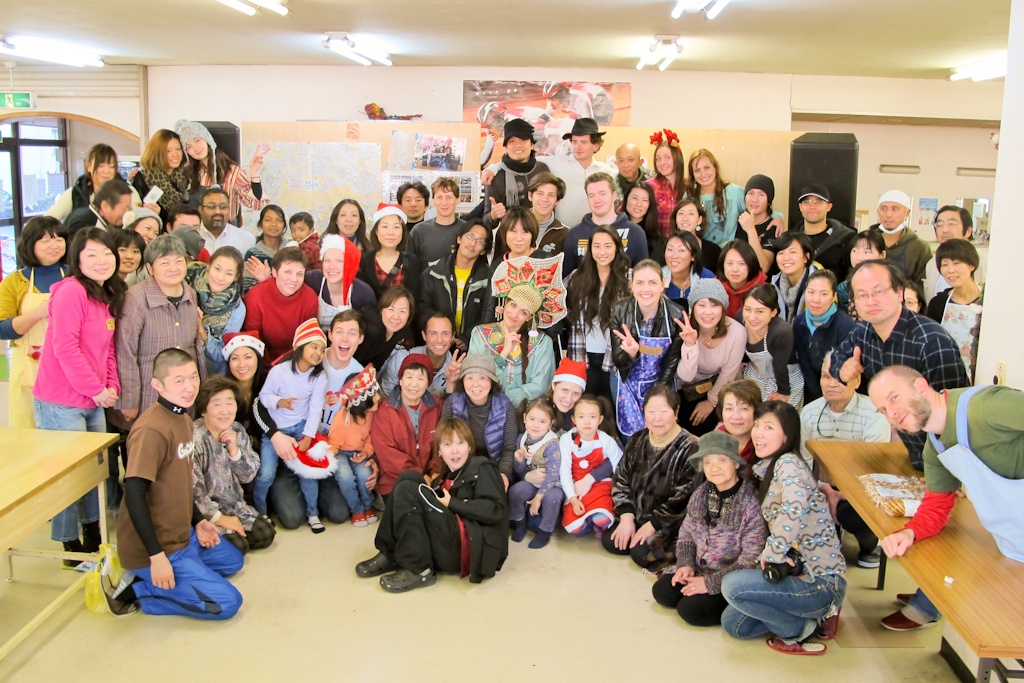 Group shot with those who stayed to hang out. 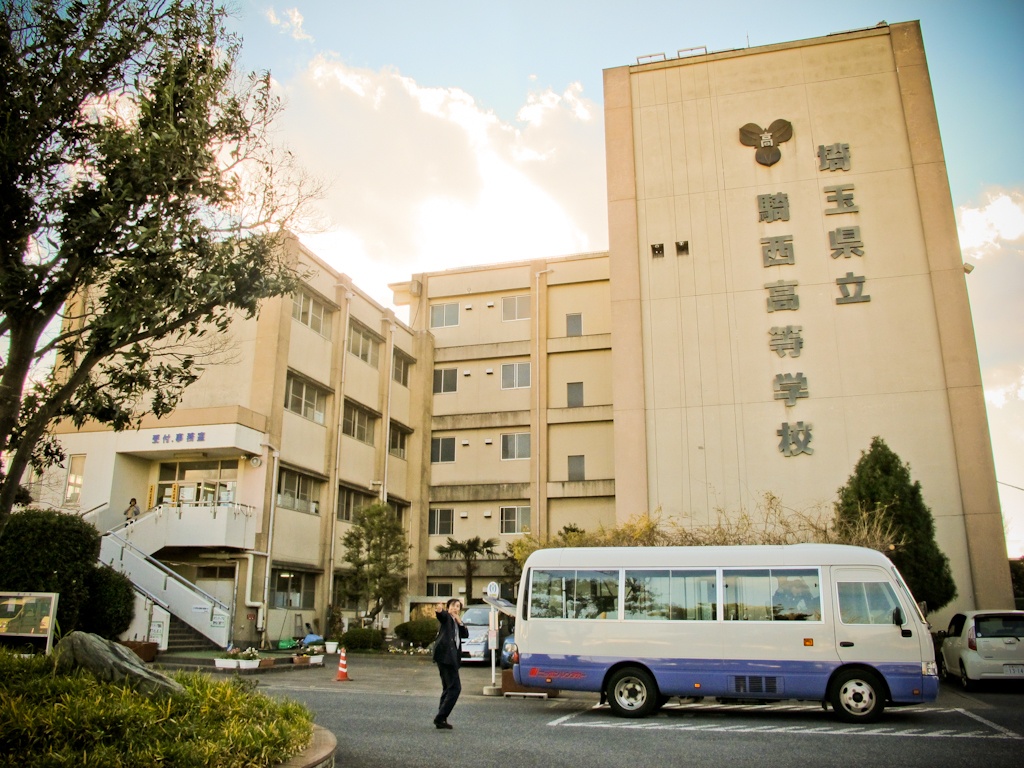 The grounds of the former Kisai High School in Kazo City, Saitama, now the site of the last remaining evacuation center after 3.11.