One of the intoxicating things about travel is the sight, smell and taste of food. Meandering through smokey alleyways and lively markets, wandering to wafts of deliciousness and stopping at endless street stalls for a sumptuous snack. For us, cuisine is a big part of discovering a country, its culture and people. And we'll try just about anything once.

So upon arrival in Cusco, Peru, we knew that part of our culinary adventure had to be cuy or guinea pig. Yes, that little hamster-like creature you had as a childhood pet is somewhat of a delicacy in the Andean highlands and has been a traditional part of the Peruvian and Bolivian diets since pre-colonial times.

The wild variety of guinea pig native to the Andes known as cavy was first domesticated for consumption as part of religious ceremonies around 5000 B.C. Head into the Cusco Cathedral and you can see a religious painting of Jesus and his disciplines sharing none other than a platter of guinea pig!

Since its initial role in religious ceremonies, its consumption as a general foodstuff has become far more widespread. In fact, an estimated 65 million guinea pigs are consumed annually in Peru. That's a lot of guinea pig! There's now even an annual festival in the town of Huacho where guinea pigs are dressed up and judged in various categories including “fattest” and “best dressed.” There's even a fashion show! You can guess what becomes of the models at the after-show party!

From a financial and environmental perspective, there are a lot of advantages to consuming guinea pig over many other meats. They take up far less space and resources than larger animals like cattle, breed quickly and can be raised in an urban environment. They are also very high in protein with a low fat content. In addition, guinea pigs provide a means of supplemental income for families who can raise and breed them in their homes and then sell them at market.

When we ordered cuy off the menu at a small and dimly-lit family-run eatery in Cusco, we weren't quite sure what to expect. A while later, our meal was served…whole. 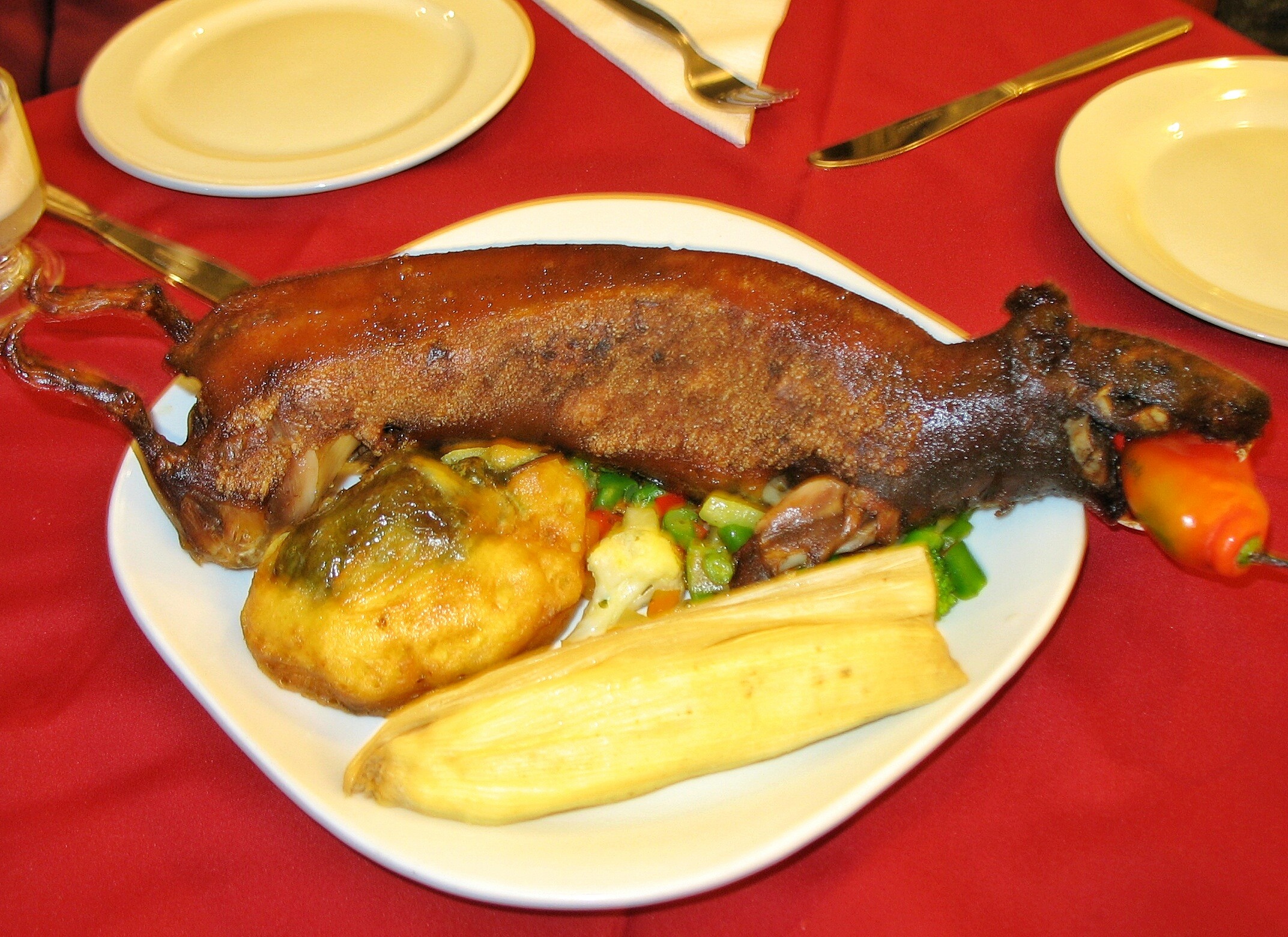 Yes, still with its head, teeth and legs, and a red pepper (or capsicum as we call them in Oz) in its mouth. (Sorry about the poor quality of this photo, but you get the idea).

We just kind of looked at it for a while. They had given us knives and forks but where do you start? How does one eat a guinea pig? Seeing our slight confusion, the owner of the restaurant came over and offered to, well um…serve it in a more palatable fashion. His young son was curious – we were the only ones there at such an early hour. We saw him staring and hesitantly approaching, and when we indicated that it was OK to come over, he gave us some pointers too.

The actual taste of guinea pig is not that bad – often described as something along the lines of rabbit or the dark meat of chicken. It's more that your mind is telling you to reject it because it is something you haven't been brought up to think of as food. However, if you can get over that mental hurdle, you might just enjoy this typical Peruvian dish.

What's your thinking towards food when you travel? Do you take a “When in Rome” approach? Or do you have your limits? What's the “strangest” food you have eaten? Let us know by sharing your thoughts and experiences in the comments section below.

Being an animal lover, I must admit that I would definitely have some doubts before ordering it but it certainly looks tasty.

It's not something that I would order again for the taste, but it's certainly a culinary experience, that's for sure.

I went to a guinea pig farm when I went to Peru and all I remember is wanting to grab all of them and run away so I could set them free. haha, Did you eat the teeth too? I remember people chowing down on them.

Hahaha Maybe you should have tried leaving a few cages open. I'm sure the chaos of guinea pigs running away en masse would mean at least some could escape ;)

No, we didn't eat the teeth! Didn't know that people did that! In fact, I don't think we ate any of the head. Did you try guinea pig while you were there too?

I would definitely be willing to try guinea pig while in Peru, but wouldn't have expected it to come whole like that. Good thing the manager was there to offer instruction. :) I would have to overcome a mental block about eating them, though. Especially since I used to have pet guinea pigs.

Yes, eating something that is totally out of the ordinary and not at all part of your culture can be difficult. It wasn't exactly a "chow-down" kind of meal for us either. Just keeping an open mind as you do, Juliann, is the important thing I think. Many countries/cultures eat things that others do not and vice versa, and sometimes people can be quick to judge. If there are things we don't want to eat, we don't have to. There are so many aspects to a country's cuisine that we can experience, and being open to them is how we discover new things. Here's to more culinary adventures!

You're already off? or is it a reminiscence of a previous trip? if you're off, Happy Travels!

When I was in Peru, I tried but couldn't get over the mental hurdle, as you call it and didn't taste the cuy. In spite of this miss, I usually try and eat what the locals eat, where they eat (street stalls, markets, etc...) off the touristy path of more expensive and "europeanized" restaurants. I want to taste the real flavors of the place I'm visiting.

In the state of Oaxaca, Mexico, the specialty is fried grasshoppers in a chile sauce. Small, medium or large. They're not very tasty in themselves, albeit crunchy of course and the chile does it all! ;-)

In Camboya, near Siem Reap (at the entrance of Angkor Temples), they fry... tarantulas! This one I definitely passed, I'm so afraid of spiders in general, I couldn't even bring myself to look closer at the heap of fried tarantulas waiting for a customer...

No, we haven't started the next adventure yet. I was recounting from our very first RTW trip from 2006-07. But the next trip is certainly creeping up on us!

Yes, I think it is all in the attitude, Jul'. I don't think travelers have to eat everything imaginable in a place to experience a country's cuisine. There are certainly things I have passed up and will pass up in the future. But I think it is all about being open to the tastes of a new country, as you said - visiting local eateries and trying out things that local people usually eat. It's such a shame to visit a new place but eat like you do back home/usually!

Those grasshoppers with chili sauce sound interesting. I'd try that! But I'm with you on the tarantulas. Not sure I can get over that mental hurdle :)