Think you've eaten wasabi before? Chances are you probably haven't, even if you've visited Japan. I know, I was as shocked about this as the next person and I've been living in Japan for years.

So what the hell have we been eating all this time?

Most condiments presented as wasabi in stores and restaurants are actually horseradish mixed with green food coloring, and often some mustard too. Tell-tale signs that it's not real wasabi include a very green color and an intense kick in the nasal passages upon consuming it. This is basically every sushi chain I have ever been to.

Genuine wasabi comes from the grating of the thickened stem (rhizome) of the Wasabia Japonica. It belongs to the same family as the horseradish but it is a different plant. Not only is horseradish a completely different colour (horseradish white and wasabi green), the main part of the plant, the “flesh” if you will, is also different; we harvest horseradish for the root and wasabi for the stem (rhizome). Therefore translating wasabi as “Japanese horseradish” is technically incorrect. 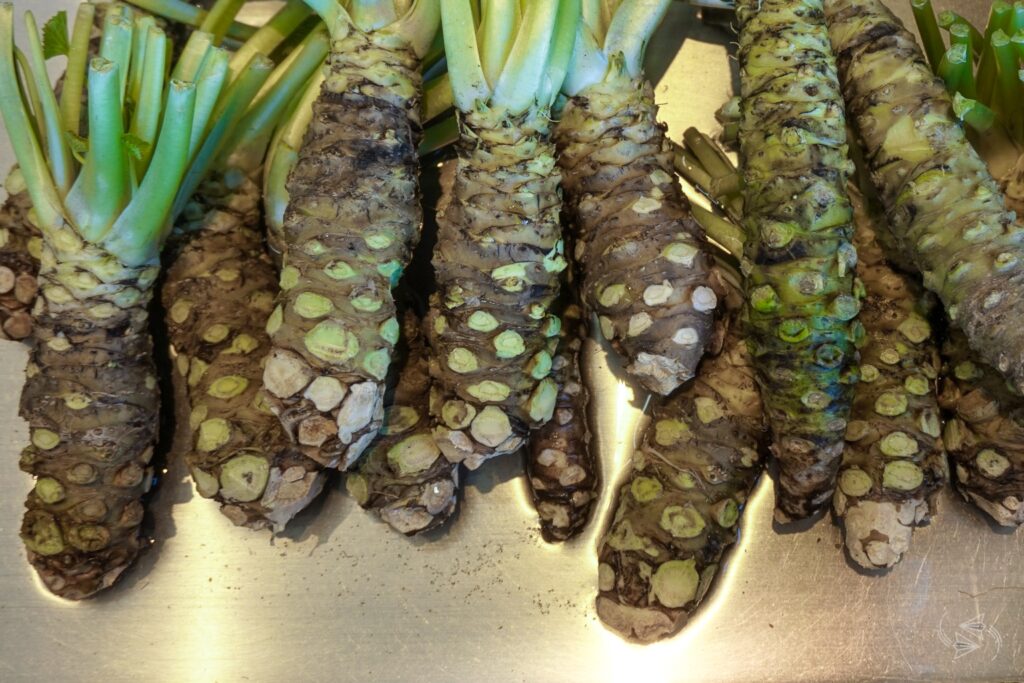 All parts of the wasabi plant – the rhizomes, roots, stems and leaves – are harvested, processed and valued for use. Although it is the rhizome where most of the flavour is concentrated and the part that produces the paste we most associate with wasabi. 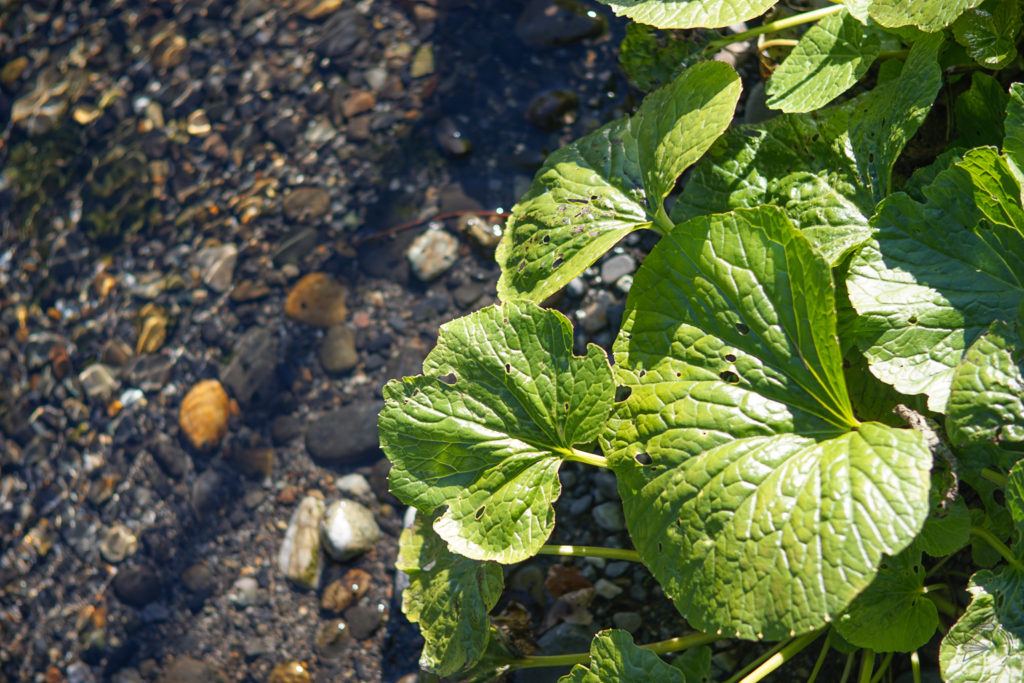 Wasabi still in the ground.

Why do restaurants serve fake wasabi?

The bottom line is wasabi is expensive, even in Japan. Real wasabi requires very specific conditions and a lot of pure, clean water to grow. It is actually grown in gravel beds flooded with spring water. Not to mention you are looking at 1-3 years for it to mature, after which time you may pull up a large wasabi stem or just a baby one. Large wasabi stems are prized and a single one can fetch 10,000 yen (around 100 bucks) in big cities like Tokyo, and even more when exported. 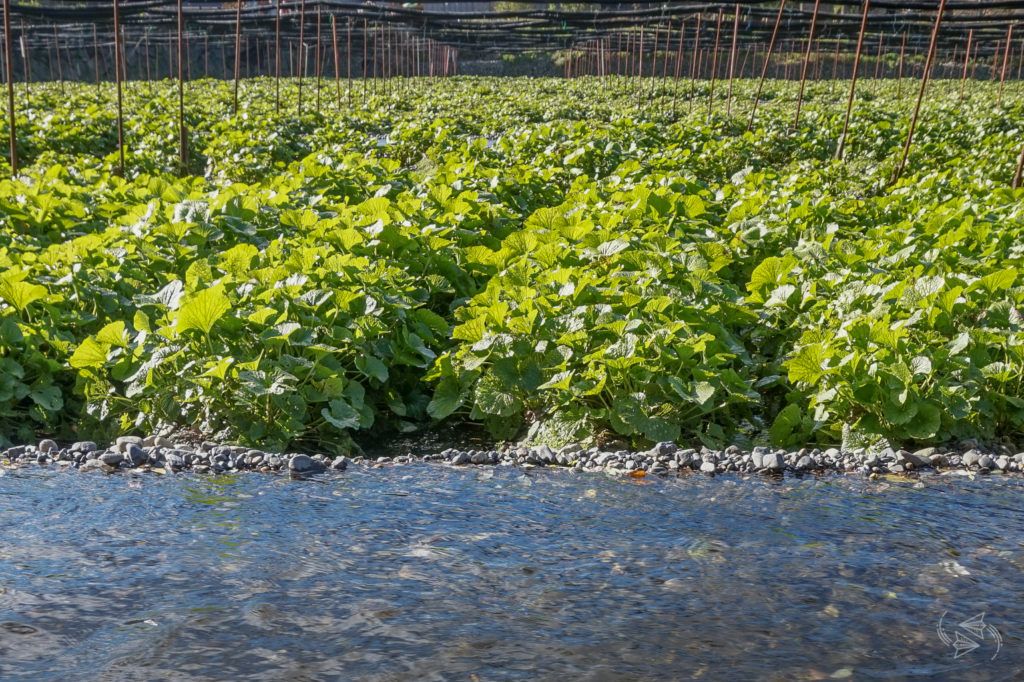 Will this be a good crop?

On the other hand, horseradish grows bigger and more quickly, and can be produced far more cheaply, while still somewhat mimicking the wasabi flavor.

Fresh wasabi also has a very short shelf-life – the rhizome stays good for just a couple of weeks in a crisper or bag in the refrigerator. Once grated and released to the open air, genuine wasabi only holds its flavour for about 15 minutes, that's where the custom of putting the wasabi under the fish on sushi came from – it holds the kick for that little bit longer.

Once we understand the difficulty and expense of cultivating wasabi, it's easy to see why horseradish has become the world standard wasabi substitute.

So, where can I try real wasabi?

You can of course find real wasabi in Japan and around the world but you're going to have to seek it out. Given the cost of real wasabi, your best shot is an expensive Japanese restaurant or by finding a genuine grower or supplier online. You can of course get lucky and find more affordable options, especially if you're travelling near an area where it's grown.

If you're travelling in Japan and want to sample fresh and delicious wasabi straight from the source, we recommend a visit to Daio Wasabi Farm in Azumino City in Nagano Prefecture. 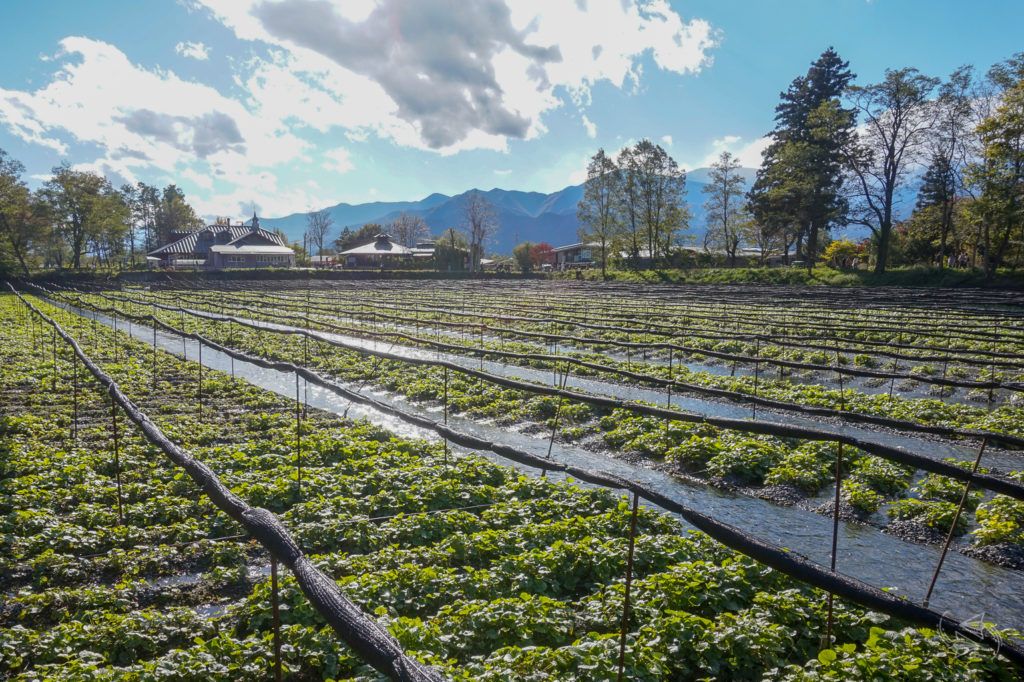 At 15 hectares, it is Japan's largest wasabi farm and is a must for wasabi enthusiasts or those just looking for an interesting Japanese experience. Who knew there was so much to know about wasabi!

This wasabi farm is not only located in a very picturesque part of the Japanese countryside, it is also completely free to enter and wander the grounds to see the wasabi growing process in action. 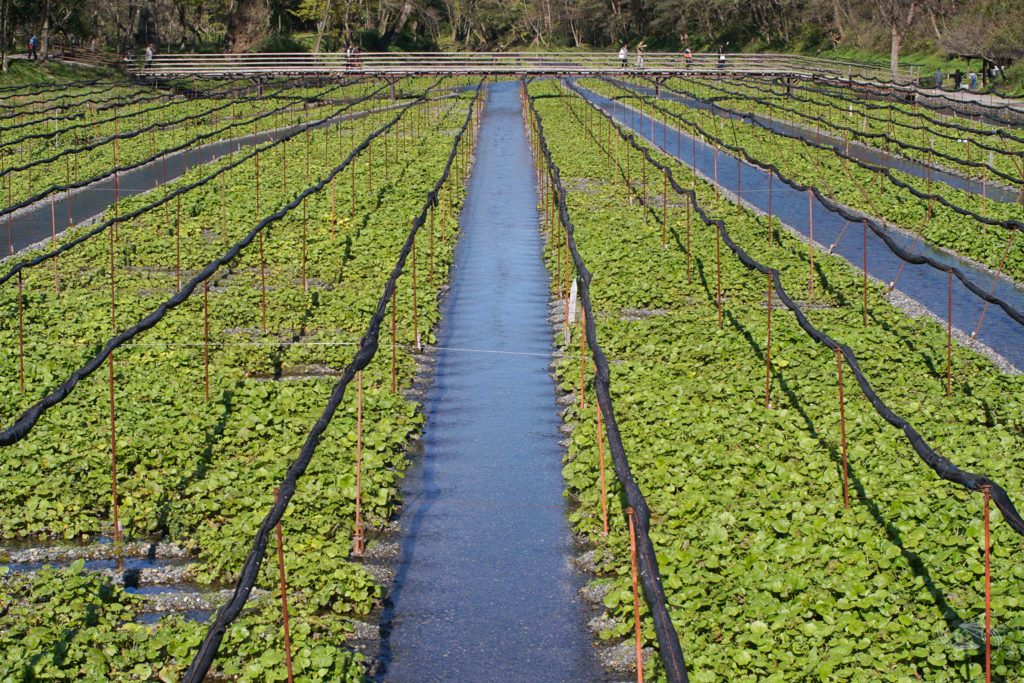 Around the grounds at Daio Wasabi Farm.

Daio Wasabi Farm was opened in 1917 and is named after the ancient local hero, Hachimen Daio, whose spirit is also said to be the farm's protector. The environment must be precise for wasabi cultivation and this is one of the few locations in the country where conditions are ideal. The farm sources the 120,000 tons of pure, spring water it needs per day for its 150 ton annual yield from the nearby Japanese Alps, which you can also see from the farm on a clear day. The water itself is kept at a constant and crisp 13 degrees Celsius all year round. As wasabi plants are very sensitive to harsh sunlight, from May to October expect the plants to be covered with black shade cloth – you can still see the plants from the side though. 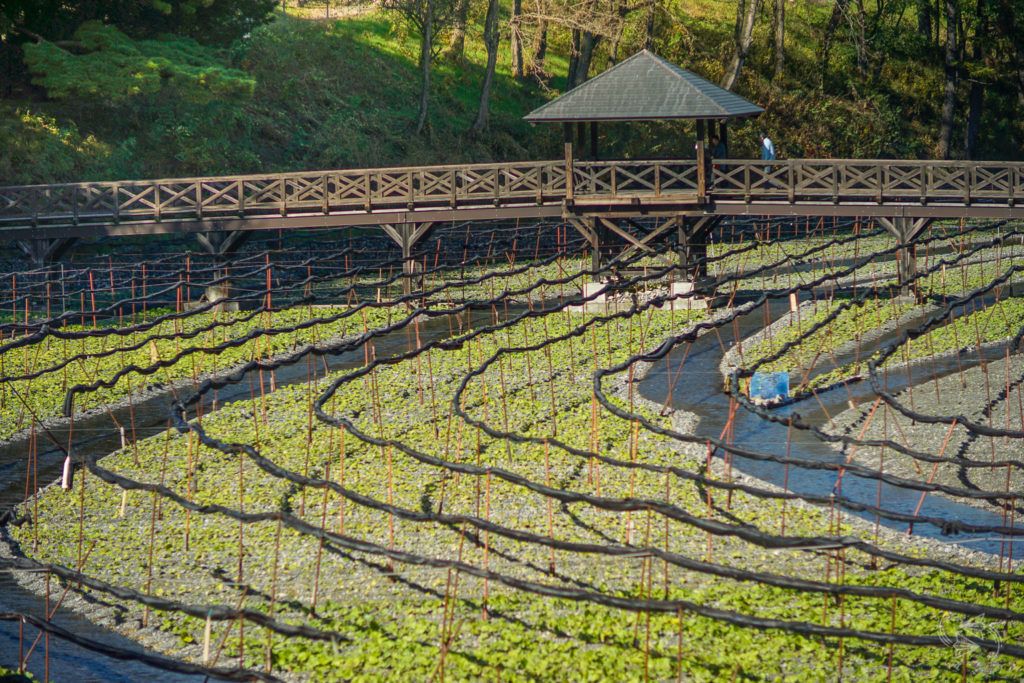 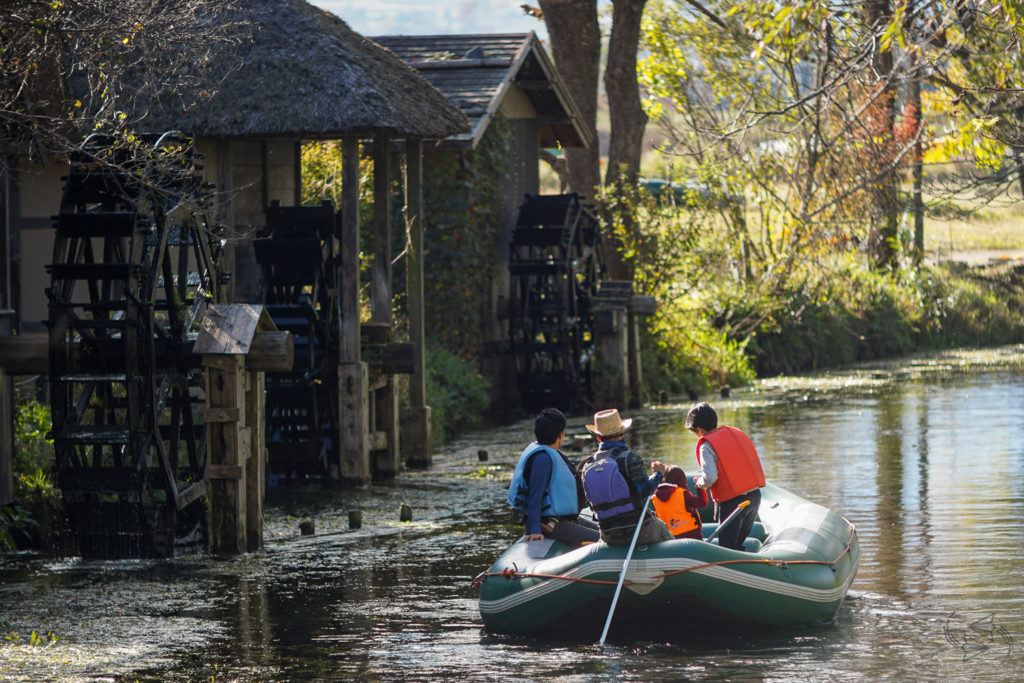 These are the water mills that were used in the Kurosawa film ‘Dreams' in a segment entitled “Village of the Watermills”. Pretty, right!

The best part of Daio Wasabi Farm – the food!

You absolutely cannot leave Daio Wasabi Farm without trying some real wasabi products! The selection of products on offer include wasabi burgers, wasabi ice cream and even wasabi beer! Many people consider wasabi a kind of super food because it's packed with Vitamin C and also has a number of antibacterial properties. 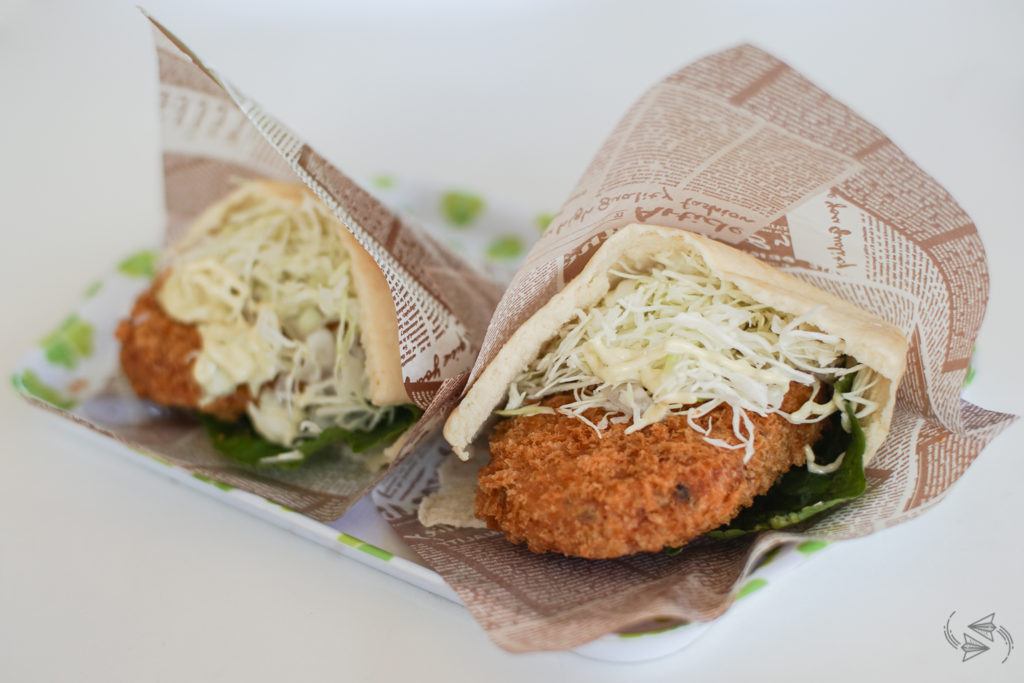 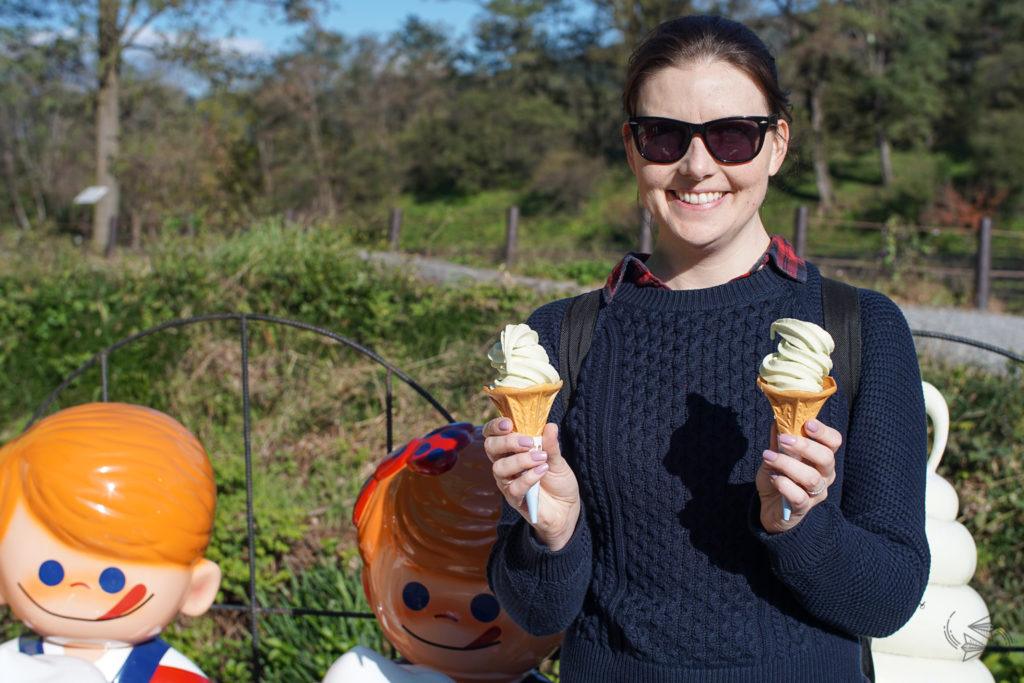 If you're thinking, no way! I haven't liked it in the past or I'm not a fan of spicy foods, we encourage you to give it a second chance, especially if your only experience has been with the fake and straight-up-the-nose local sushi chain knock-offs. Fresh, genuine wasabi is actually rather mild in comparison. You may still feel a bit of a burn but it's not the really harsh kind that has you screwing up your face and holding the bridge of your nose. The color itself is notably paler and the taste is sweeter and more herb like.

Check out our visit to Daio Wasabi Farm here.

Pin me for later!

ACCESS: Daio Wasabi Farm is located approximately 3 hours away by train or car from Tokyo.

From Hotaka Station, it is a 10-minute taxi ride or a 40-minute walk. Bicycles are also available for rent for 200 yen/hour outside Hotaka Station.

If you're driving, there's a free, large carpark at the farm entrance.

What would you like to sample at Daio Wasabi Farm? What have your experiences been with wasabi – real or fake? Do you like it?

I visited a restaurant in Singapore last Friday where I had to grate my own wasabi to go with unagi. It's quite clean and it was almost lost amid the heavier flavours. I still wouldn't eat it on its own!