A trip to Nakano in central Tokyo will have your expectations of icy treats elevated to a whole new level (literally). Tucked away on the basement floor of geek haven Nakano Broadway, Daily Chico's super-sized soft serve ice cream cone will challenge even the most avid dessert lover. The store's “Tokudai Soft Cream” is a tower of eight different ice cream flavors! Yes, eight! One serving of every flavor on the ever-changing menu. And all for the price of ¥390! That's around US $4! 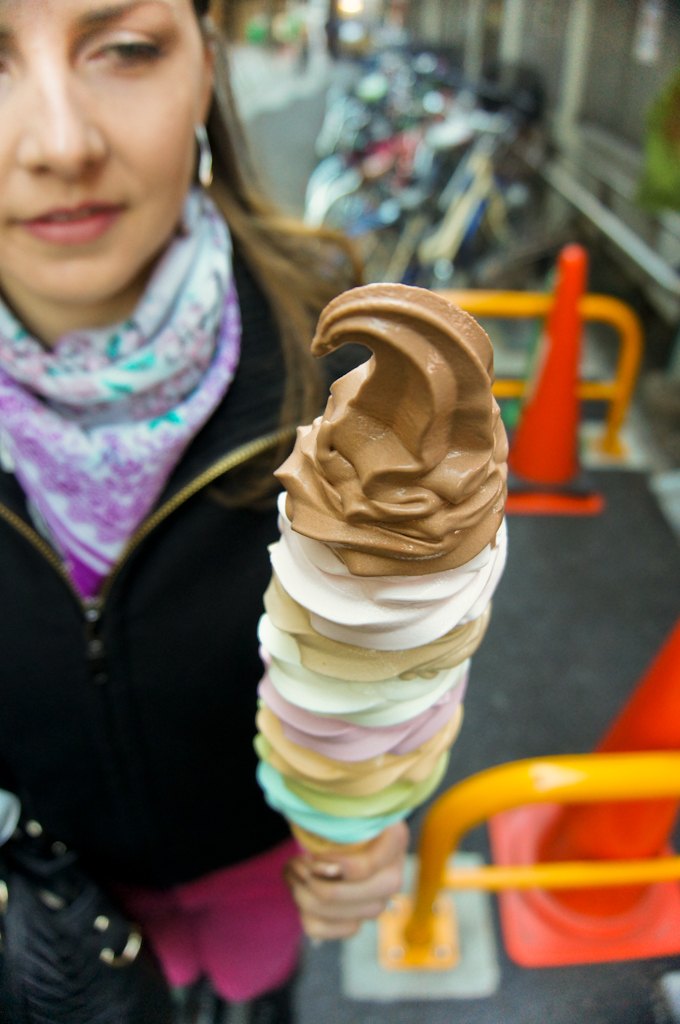 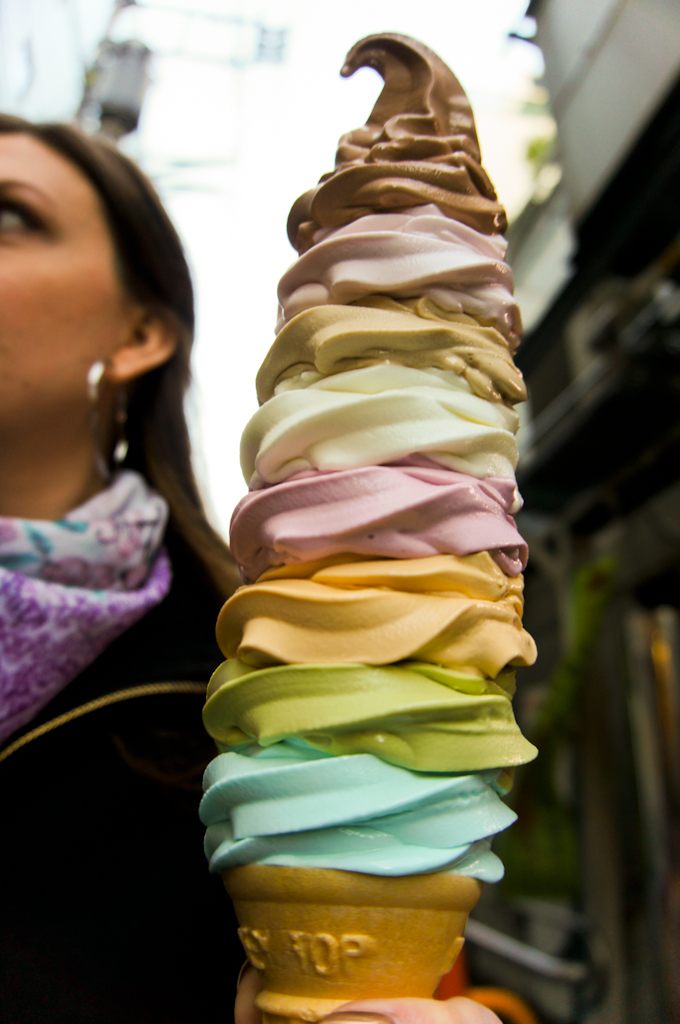 From top to bottom, we have chocolate, strawberry, mocha, vanilla, grape, caramel, green tea and ramune. They translated ramune as “fizzing candies” and then put a question mark after it. :) Ramune is a type of carbonated soda drink popular at festivals which you open by using the cap to push the marble ball acting as a cork into the liquid, thereby creating a hole for you to drink from. It has its own distinct flavor but I would liken it to very sweet lemonade or bubble gum.

Walking around with the precarious tower is generally frowned upon and the adjacent Petit Paris store has invested in signs indicating that you can't walk through with your ginormous treat. Bet there have been more than a few toppling towers in there. Most people hang around by the stores rubbish bins as a safety net for pending disaster.

We quickly went up the nearby stairwell and out of the building to take some photos outside. In a narrow pedestrian street by the bicycle parking, we tried to make headway as soon as possible. It had been three and a half years since we visited and let's just say that it was the middle of summer and the white shirt I was wearing was never the same again. Our leaning tower of ice cream ended up stuffed into a vending machine bin (for cans and bottles) to avoid further violation to the pristine streets. Sorry Japan!

This time we were determined not to fail and we had the freezing winter weather on our side. Seconds in, we were already pressing our fingers to our temples in a state of brain freeze. The elderly couple in the small shop across from us were having a good laugh while pretending not to stare at the comical battle before them. When we got it to a reasonable size, we stepped into the arcade to take a few more shots. It seems that it was still stare-worthy and got more than a few sugoi‘s (wow's). We felt like saying, “You should have seen it before!” Hidden away from street level, the store's existence is unbeknown to the average passerby who will simply look at you with amazement and think you have portion control issues.

After repeated intense ice cream headaches and solid teamwork, we are happy to call this attempt a gigantic success!

So what do you think about this eight-storey giant? Are you up for the challenge of a “Tokudai Soft Cream”? What flavors would you like to try?

Access: Take the North Exit of Tokyo's Nakano Station (on the JR Chūō and Chūō-Sōbu Lines as well as the Tokyo Metro Tozai Line). Directly in front of you, you'll see an arcade known as the Sun Mall. Walk straight down this arcade until you reach the Nakano Broadway building (there's a huge sign – you can't miss it). After you enter, you'll see a small information booth to your right. Just after the information booth, there is an escalator with a red sign that says “SEIYU” going down to the B1 floor. At the bottom of the escalator, go left and just follow the path that takes you past all the fruit and vegetable stores and the pharmacy. When you can't walk ahead anymore, turn to your left and Daily Chico (デイリーチコ) is right there on the left-hand side. If you are looking at a small ice cream shop that also sells crepes, just turn around, Daily Chico is behind you. Basically, if you have entered the Petit Paris section, you have gone too far.

Daily Chico is open seven days a week from 10am-8pm. 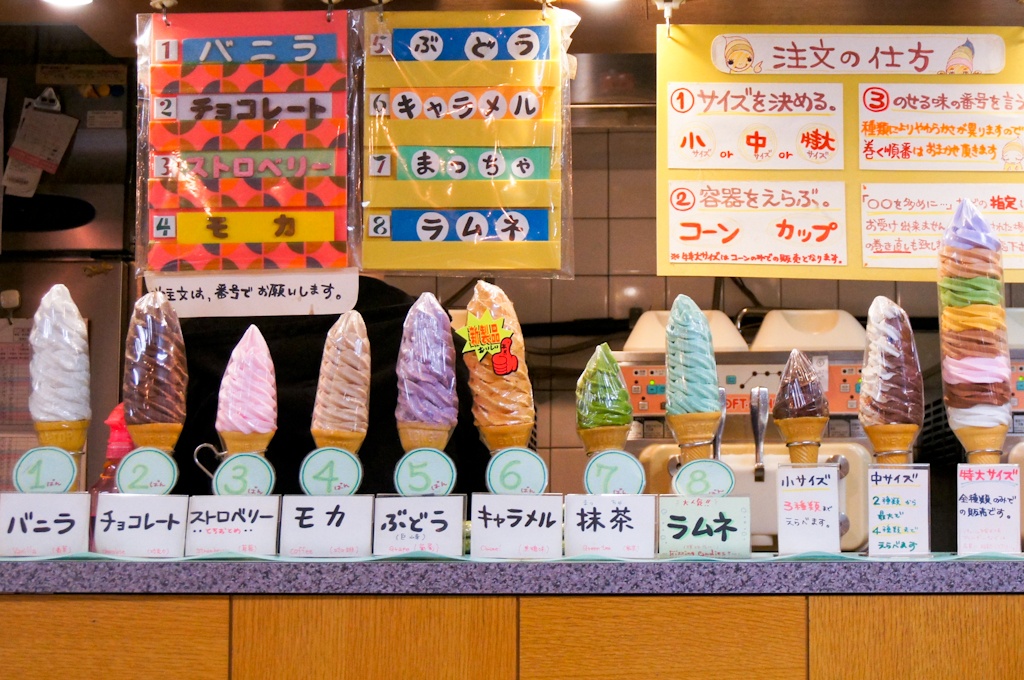 […] We found Daily Chico thanks to Jessica Korteman over at Notes of Nomads, where she posted super clear instructions on how to get there. This is a must do for any icecream (or just general life) enthusists visiting Tokyo – check out the original article for directions:  https://notesofnomads.com/super-sized-tokudai-ice-cream-nakano-tokyo-japan/ […]

[…] So I discovered this blog: https://notesofnomads.com/super-sized-tokudai-ice-cream-nakano-tokyo-japan/ […]

Omg, that's amazing! Do you have other soft serve shops to recommend in Tokyo? we'd like to visit all of them xD

No place in particular comes to mind, however, we'd definitely recommend trying black sesame flavor! It has a unique taste and we're big fans. It's definitely something to try when in Tokyo/Japan. You can find it at various locations, but we know you can get it at Namco Namja Town in Ikebukuro.

Hope that helps and happy eating! :)

Why didn't we see this while in Tokyo? I guess we have to go back for this reason alone ;) Great story!

Thanks, Franca. As the store is so hidden, even many locals don't know it is there. It's a little Tokyo secret ;) Always a good reason to go back! :)