Her matching mustard pant and shirt set stood out across the vacant square, her outstretched arms waving and gesturing for us to come over. Having just arrived off the bus from Trà Vinh, we were wandering aimlessly trying to find a place to eat in that awkward time between lunch and dinner when many restaurants choose to close their doors. Without any other options in sight, we followed the brightly attired stranger to the open garage-looking space with small tables and low red seats.

The group of women greeted us warmly and asked us to come in for a chat. We ordered two white ice coffees first, as usual. “We've actually just come off the bus and are quite hungry. Do you also sell food?” Hai asked. They didn't, but said they could get us some. “What do you want?” “Anything you recommend.” “OK, you have to try this dish.” Two of the ladies hopped on a motorbike and came back a short time later balancing two bowls of soup with dipping bread that was deliciously deep-fried like a donut. As we ate and drank, they asked a lot of questions and told us about their families and their children.

“One of the kids is super cute” they said. “She's fat and has long hair.” Conversations about weight are basically open for public discourse in Vietnamese culture, yet, for the most part, no one seems to take offense to it. I had flashbacks to our Vietnamese engagement ceremony in which I was to wear the traditional ao dai. I remember going from shop to shop with Hai's mum only to be told that I was “too fat” to fit into any of them. I ended up borrowing one from a friend but it still had to be pinned to stop the press studs from coming undone whenever I exhaled and my rice intake was rationed for the week preceding the event.

Some time later, a solid five-year-old wearing a silky red outfit and with even silkier jet-black butt-length locks, got off a motorbike of a random relative. In fact, to this day we are not actually sure who she belongs to. Other kids joined the party too and soon I was roped in to playing games with them while Hai was left to keep up with the more complicated Vietnamese conversations. The first game was throwing a soft rabbit toy in the air and trying to catch it. That went on for some time. Then we played a Marco Polo-esque game where one person stands with their eyes closed while the rest join hands and chant in a circle around them. When the chant ends, the surrounding group disperses while the person with their eyes closed tries to find and touch one of the others.

As night descended they asked me to come out to the adjacent square to play more. The square had a lovely night-time vibe with many locals enjoying the balmy evening and kids roaming alone in a way that we were allowed to as kids and is now unfortunately a thing of the past in many places. We played their “Stand up, sit down” game, threw shuttle cocks back and forth to each other and played hide and seek where everyone hiding hides in the same spot! Hard to camouflage yourself en masse in such an open space but yes, we can all line up behind the rubbish bin in single squatted file!

After several hours, Hai came to see what we were up to. Fascinated with his camera, they took joy in posing for and taking photos, that mostly came out blurry because they were laughing too much and couldn't keep the camera still. 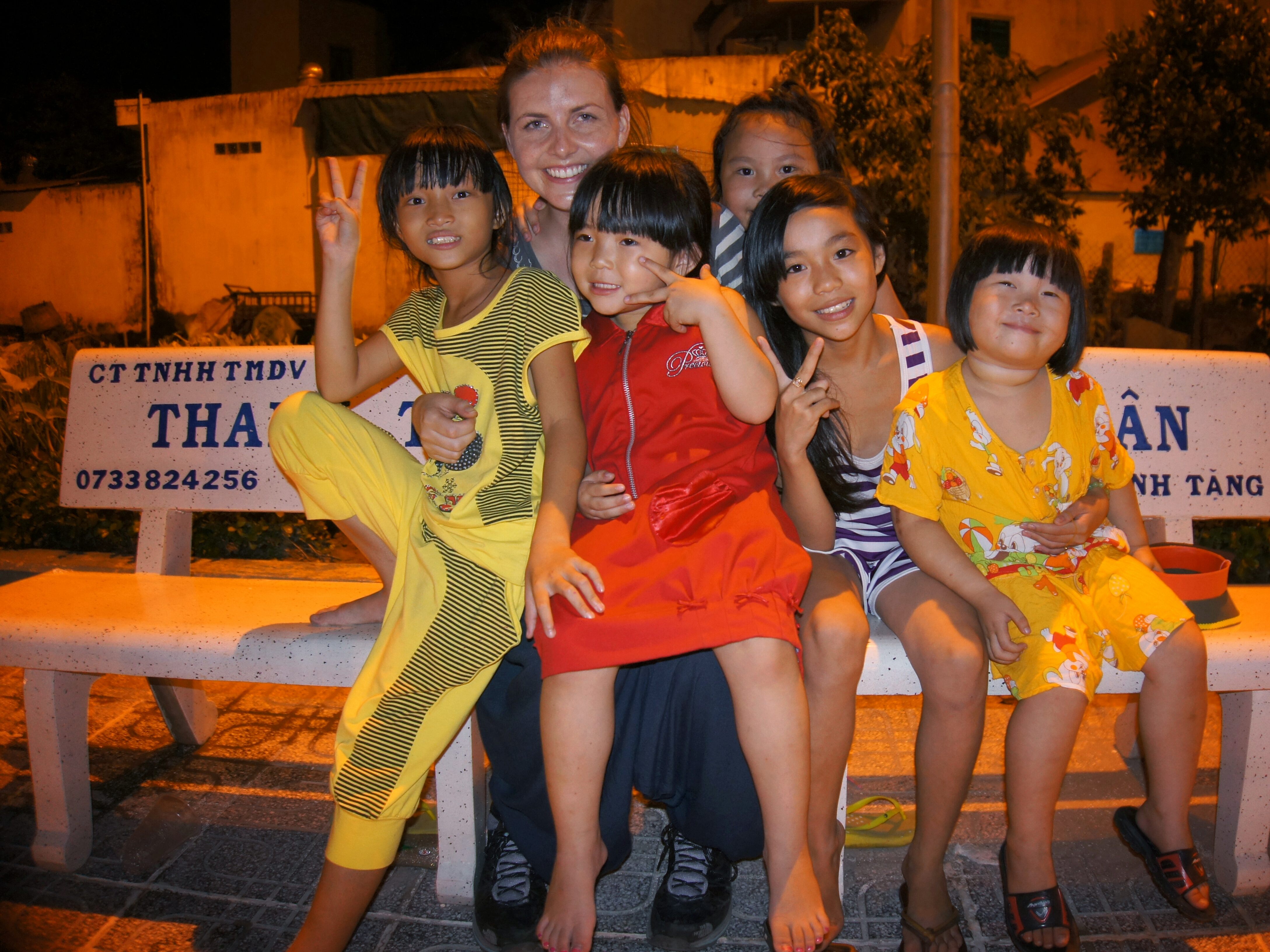 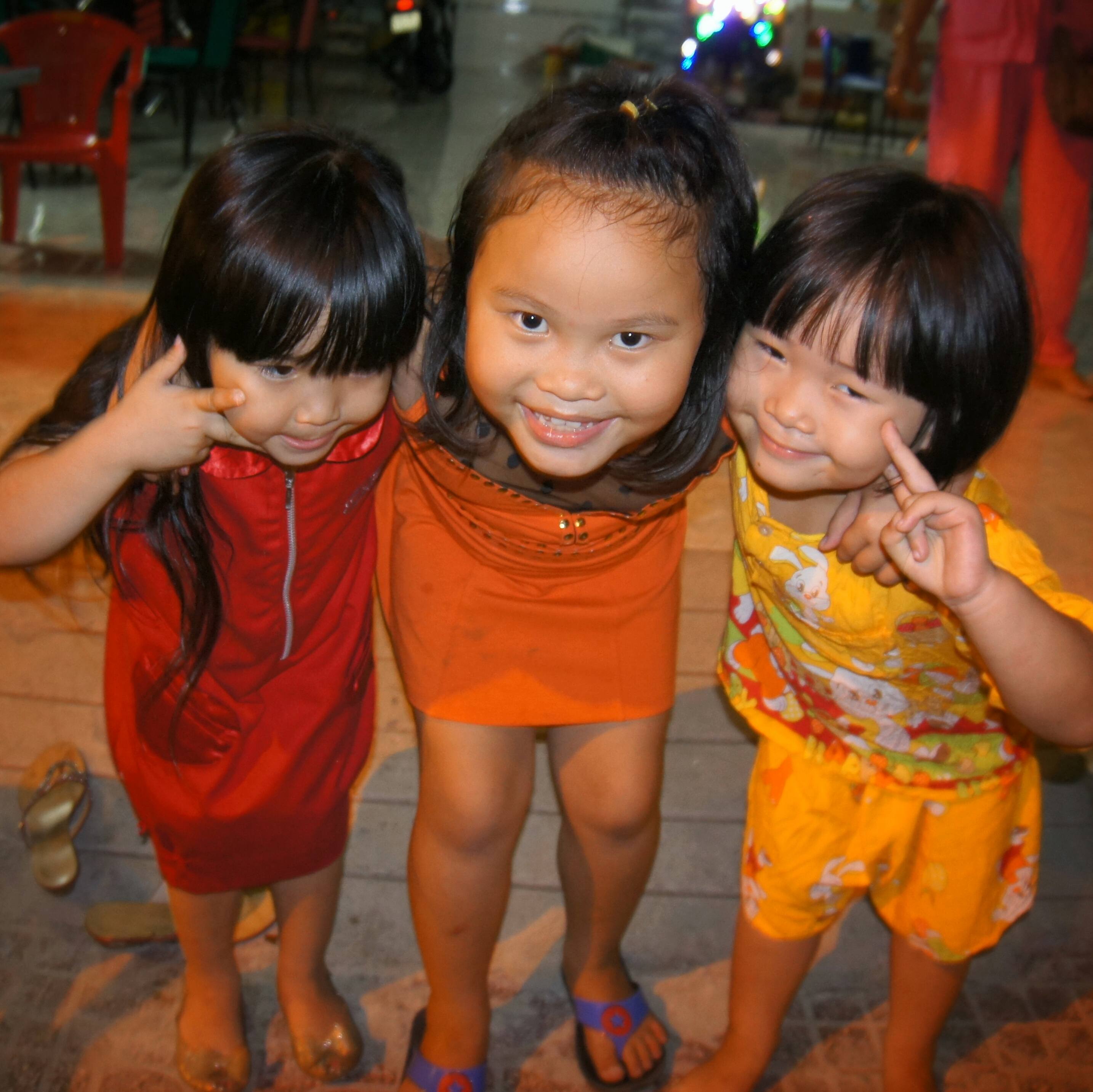 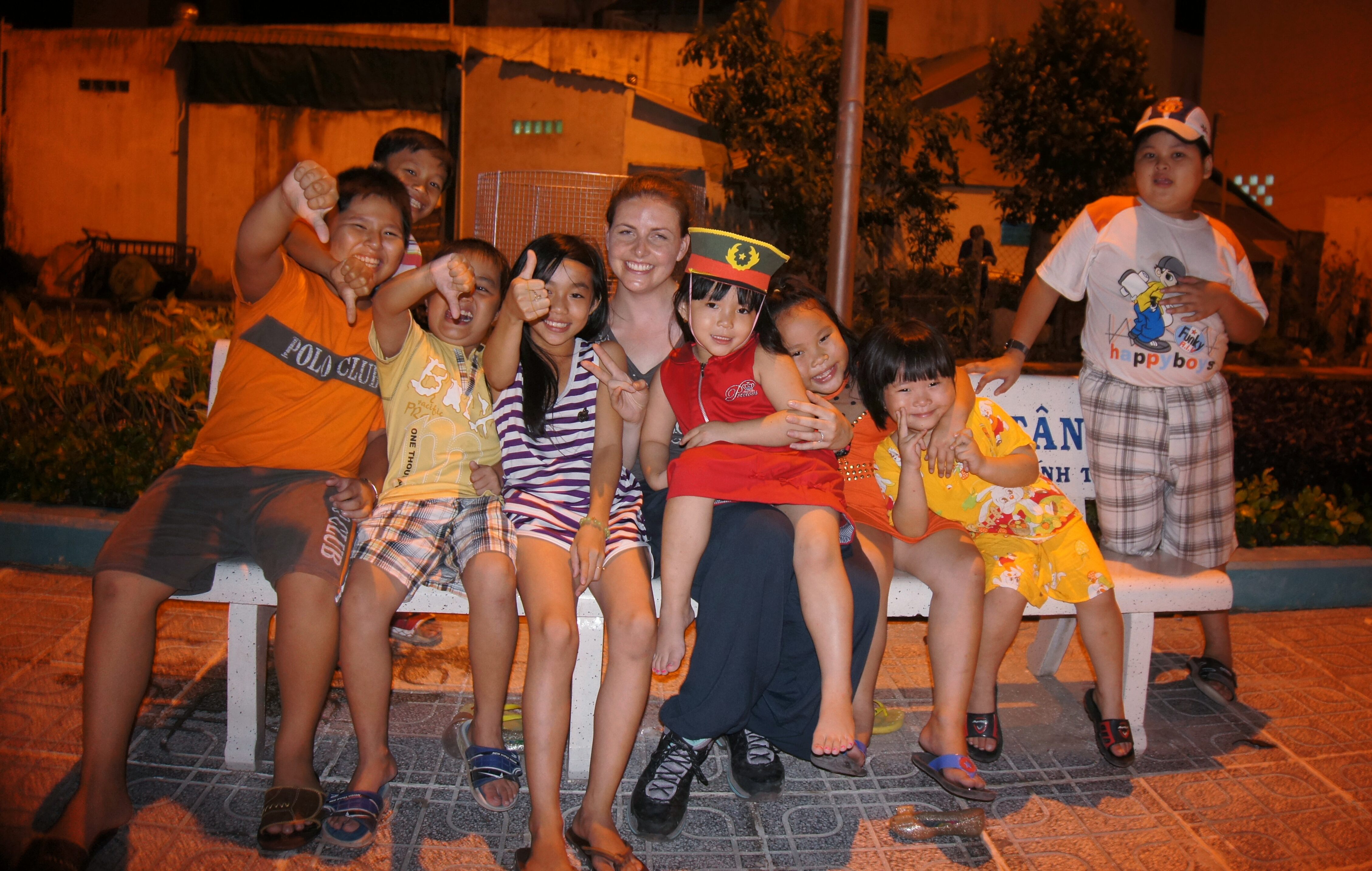 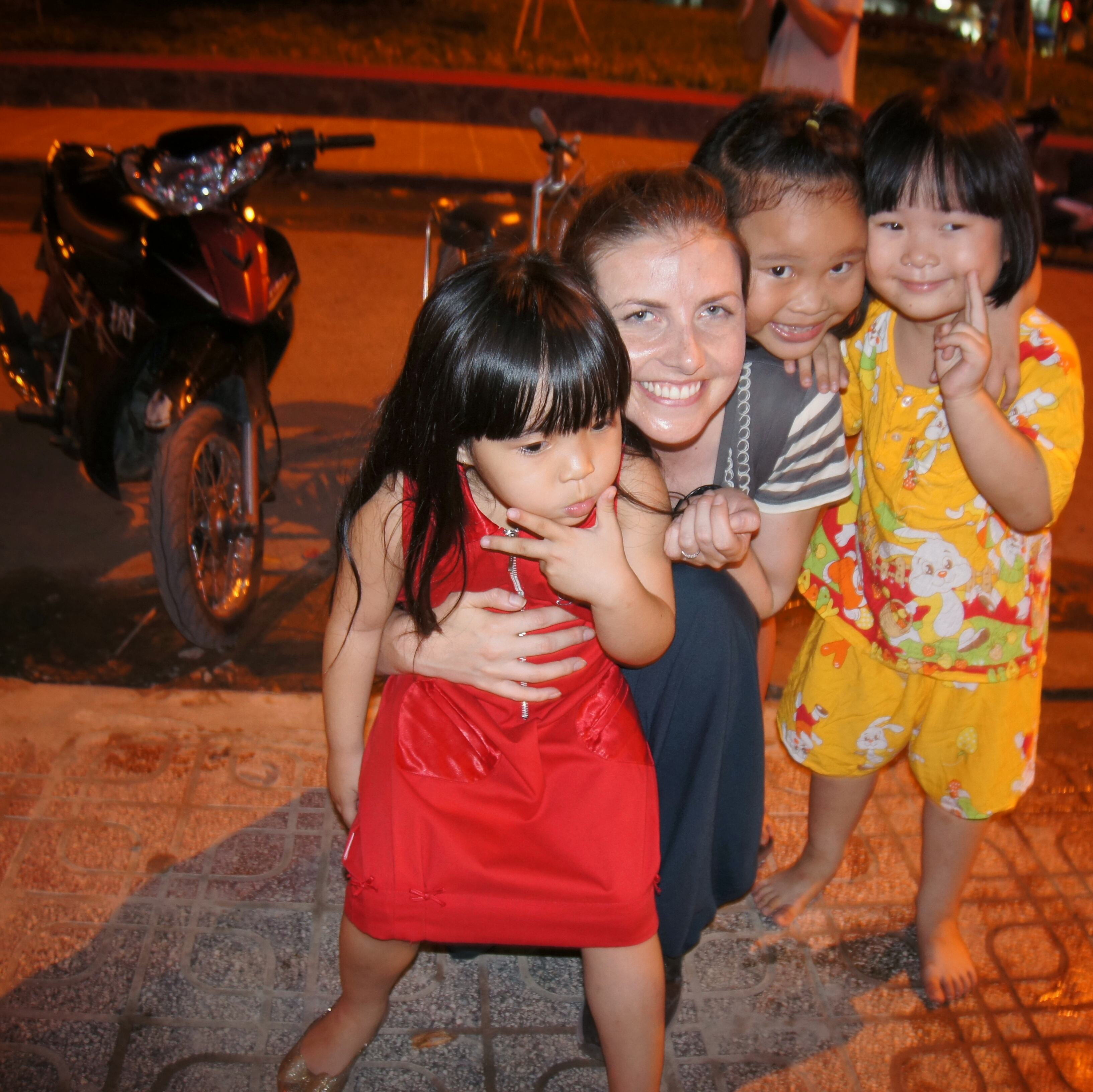 After an extensive photo-taking session in which the kids were yelling at each other to be careful with the camera so as not to break it, we made our way back to one of the only hotels in town. The kids asked us to please come again the next day and we promised them we would. In fact, Hai had mentioned to the family that we were interested in taking a boat ride and seeing the floating markets and they offered to arrange a private tour for a good price rather than going on a group tour with a company. “This is a small town. They wouldn't dare try to rip off a local person! Come back at 7am.”

The following morning we got up early to make the 15 or so minute walk to the cafe. They, like many other Vietnamese coffee houses, open at 5am, so doors were well and truly open by this time. We sat down and had our white ice coffees and they went and got us something for breakfast. Another random recommendation that they said we had to try and another perfect meal.

The lady in yellow from the night before didn't show up until about 9am, but we were on Vietnamese time. It was now the weekend and the kids came by early to play. 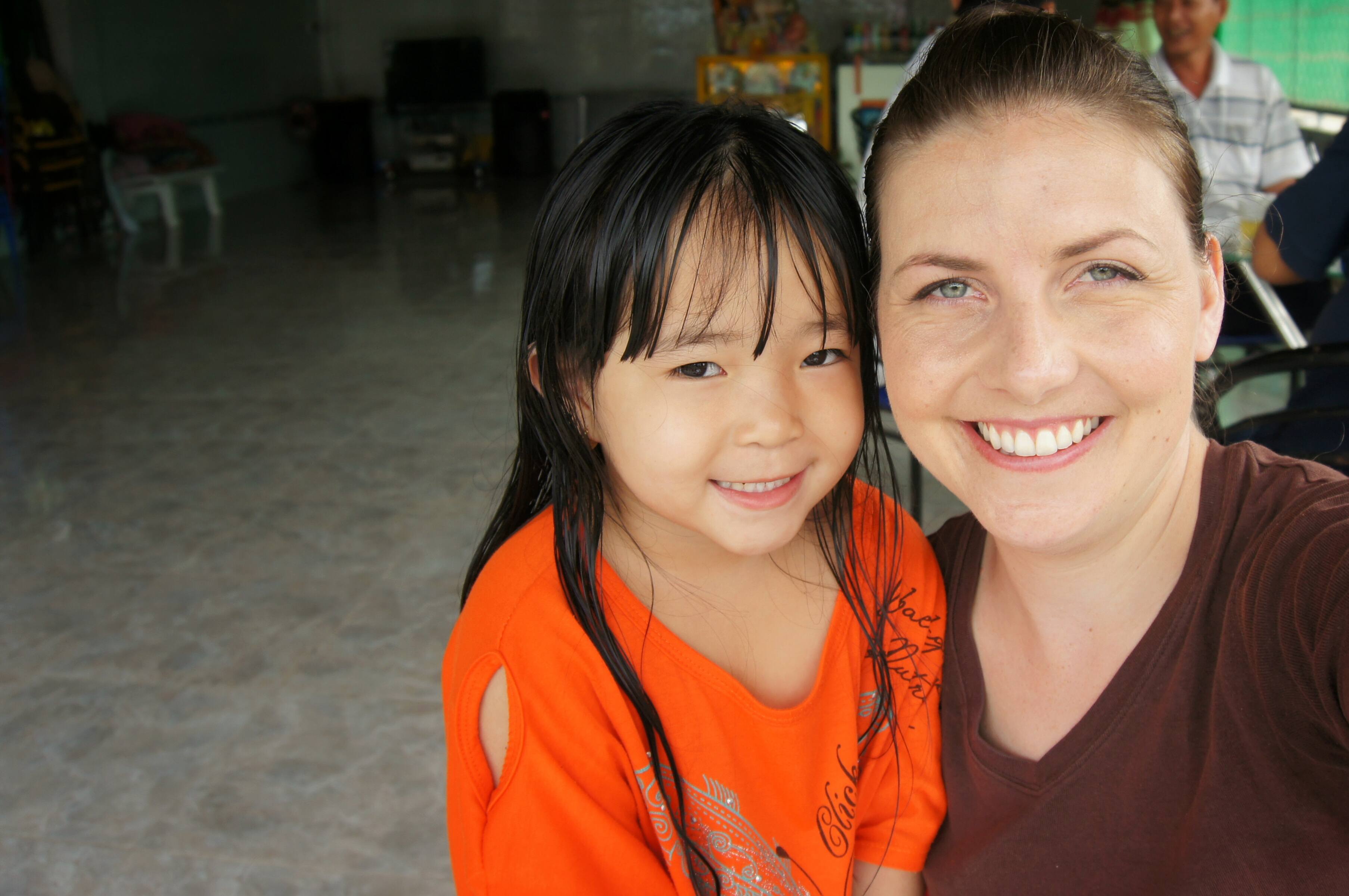 Another hour or so of games in the square and it was time to depart. We were escorted by our guide through the market and to the river. We went down the river and back where we could see dwellings along the river bank and boats full of fruit before heading to our first stop – a bee farm. There you can enjoy various products made from royal jelly – a secretion from the throat glands of worker bees, the sole food source for queen bees and hence the name royal jelly. It is said to have a whole range of health benefits and is believed to be the reason why queen bees can live up to 40 times longer than worker bees! You can try this regal substance out for yourself in tea and on a spoon with honey. 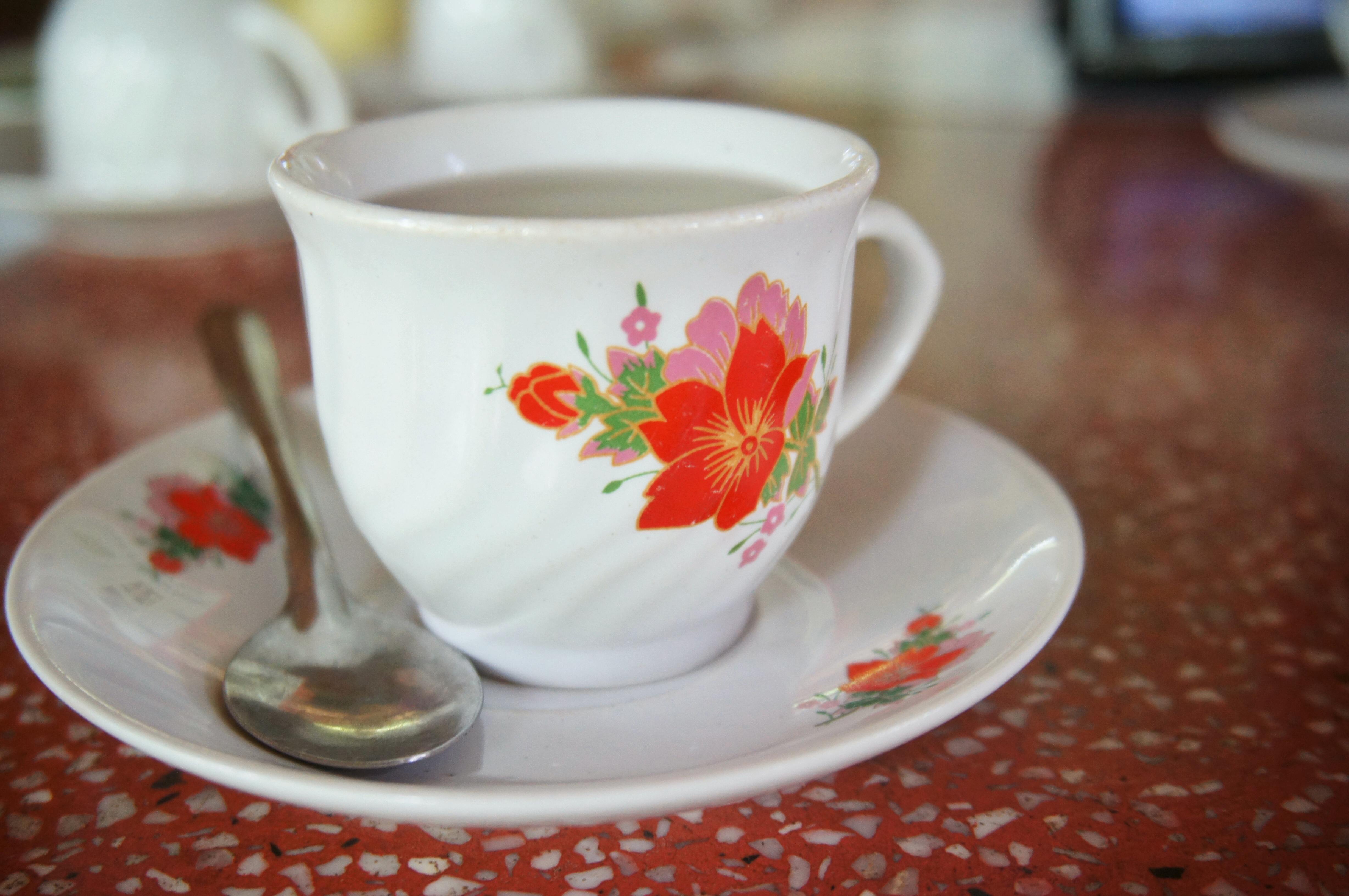 The next stop was a fruit-picking island where you can taste various fruits while watching short performances and listening to traditional music. You can take a short walk to see the orchards and buy rambutan (hairy fruit) straight from the tree. We then changed to a small boat for a paddle through the tributaries during which time the guide insisted we wear the traditional conical straw hats. 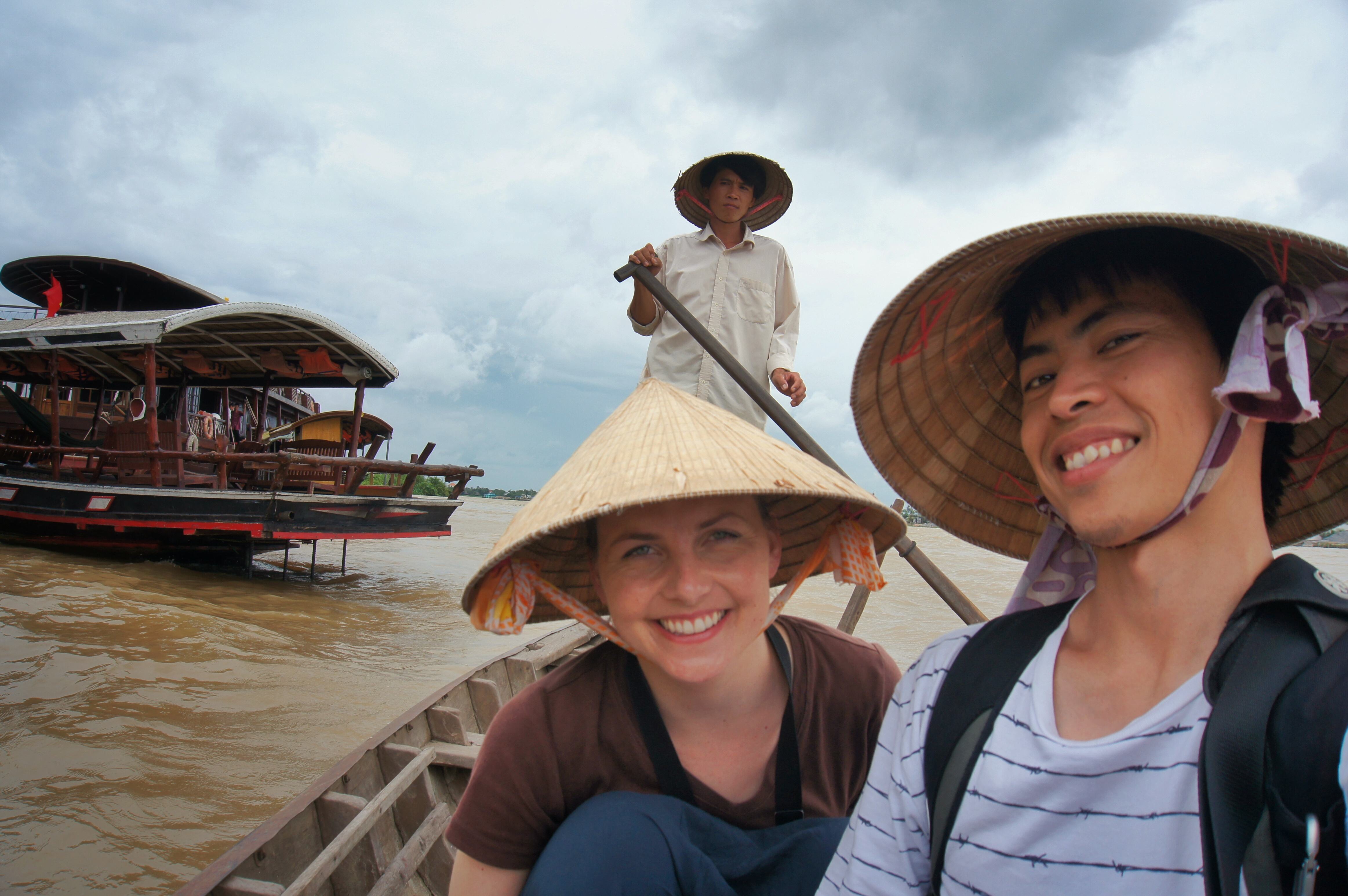 After returning back to the markets by motorboat, we parted ways with the guide and went to get lunch. That afternoon we bumped into yellow dress lady who asked us about the tour and what time we got back, then reiterated our plans to come by the cafe that night.

Dinner was arranged for us and it seemed we had been taken under their collective wings. They now charged us the bare minimum for drinks and the kids had laid claim to us in the square. Our daily activities could be arranged with a few phone calls and we weren't to worry about a thing. Apparently after Mrs Yellow had bumped into us earlier in the day, she had promptly called to yell at the boat guide for not taking us out later into the afternoon.

The cafe was our usual hangout. That night the square became a Michael Jackson dance show with a young child and teenager pulling out the moves on the road opposite the cafe. The young boys took turns dancing while the other put on their entrepreneur hat, weaving through the growing crowd selling hard chewy candy sticks. And if you buy five of them, you can put in a request. Apparently, this performance happens every night in good weather at various locations around the square. That night just so happened to be right in front of the cafe so we had front row seats.

Chatting with more of the family – a couple, who we assumed were parents to at least a couple of the kids, offered to take us to their orchard after Hai mentioned he had never seen a durian on the tree before. They said to meet them at the cafe the following morning.

The next morning coffees were brought out automatically and we sat and chatted with the family members who spent the night there. They take turns to stay and open up the cafe at 5. When learning of our arrangements to go to the orchard, they called the couple several times with no answer. “They always wake up so late!” they exclaimed angrily. They started calling around asking people they knew if they had any durian left on their trees. When unpicked durian had been located, we hopped on the back of their motorbikes for a ride through narrow residential paths to a family orchard where they instructed us to climb one of the trees to take photos. They laughed at my pathetic attempts to climb to the higher branches – getting up was one thing but getting down after seeing the drop is another. They gave me a tiny durian that had fallen prematurely as a funny gift – I could pretend I picked this from the tree myself.

After returning to the cafe, we were told the grandfather was cooking lunch at home for us and that he was so particular that no one was allowed in the kitchen while he was cooking. We were chauffeured again by bike to the family home. Well-off, the house was large and grand with a huge portrait of the grandmother and owner of the cafe hanging on the wall. After chatting and fruit eating, we were instructed to sit on the floor and partake in a huge steamboat with fish. They filled our bowls, and then again. A larger bowl was then brought to me. Apparently the uncoordinated way I was eating looked like the rice was going to tip over the side of the bowl so one of larger proportions was in order. The problem was that a usual serving then looked like my bowl was empty and more was added, more than once. We were struggling to continue eating but it seems our “no, thank you's” were ignored. I'm a slow eater with normal portions let alone with this epic battle before me. “You eat so slow!” said one of the young girls who had finished her serving long ago.

Back on the sofa, more fruit was brought out and we were instructed to eat more. We tried to squeeze in a little more for the sake of being polite but when we slowed down, they just started peeling the fruit for us and making sure we ate more, more, more. They beamed as we consumed their offerings.

“She looks tired” they finally concluded, and within moments, a room had been arranged for us to nap for a couple of hours. Laying down in the freshly deodorized room, Hai said “I think we've been adopted.”

“Next time, you don't stay in a hotel. You just come straight to see us” they said as a few of the family members prepared motorbikes to escort us to a bus that could take us back to Ho Chi Minh City. “And bring your children” they added.

How We Actively Meet People On Our Travels - Notes of Nomads

[…] Had we not taken the time to chat with the owners of a café in Vietnam, we wouldn’t have had the experiences we did in the Mekong Delta, and we wouldn’t have been here at their house after a wonderful home-cooked lunch. Click here to read about how they effectively adopted us and became our extended Vietnamese family. […]

Wow that's amazing so lovely of the beautiful family to adopt you!