Hey nomads! The J-COM guy came to the door this afternoon so that means we now have Internet! Hooray!

This will be our first blog post after returning to Japan so wanted to update you on how the first few days have been.

I was kind of worried about the contrast in weather between Sri Lanka and Tokyo at this time of year, but the first few days were surprisingly mild and we didn't need to rush out and buy a million layers like I was expecting. That said, it is snowing in much of the country and today in Tokyo the weather has turned to rainy and freezing. I don't like being cold and going out to get lunch today was our first cold weather challenge for the season. At least the friends we are staying with have a lovely home with heating and a big fluffy cat that I am day by day coaxing to sit ever closer to me. Hoping to have him sit on my lap within the week. ;)

The first few days have been kind of strange. After a long trip and feeling ready to be back, I was expecting that I would be running around with starry eyes, gazing and indulging in all the things we missed. But despite the time we've spent away, everything seems so “normal”. It's not that we don't love being back, eating food we haven't had in ages and walking around familiar territory, it's just I didn't have that “we're back” moment that I was expecting. Maybe that will come somehow, once we've had a chance to catch up with more friends and feel like stuff has happened since we last met. For now, the changes we've seen have been minimal – a new restaurant here, an old one shut down over there, new signs and train barriers. I'm left wondering whether it is possible just to slip back into Japanese society as if we never left, at least for the most part? It's not like nothing has changed and I do feel it will take some time to get back in the loop and move around the city again without having to think twice, but maybe that's all it will take. Just a little time.

We've spent these first few days getting reorientated, calling the bank, trying to connect to public Wi-Fi (which I have to say is pretty terrible for such a technologically advanced nation – read our post on Wi-Fi in Japan here if you ever need it), as well as replacing some of the clothing items that were well past their use-by date by the end of our trip – we got some ‘heat-tech' socks from Uniqlo, Hai got a zip-up hoodie and me a new coat.

On Sunday, we also participated in a festival for Polestar, a Japanese sauce company. We have been working as Polestar ambassadors for some time now. We carried a bottle of one of their most popular sauces, Chuo-sen sauce, around the world with us and made videos doing their “sauce pose” in every country we visited. A few of the earlier clips have already been made into a commercial, which we saw live on TV for the first time two nights ago.

At the festival, we mingled with the crowd and I got up on stage to teach everyone the “sauce ne” pose so that we could do a take for the cameras for use in a future commercial. We will be meeting with the producers soon to work on more collaborations. 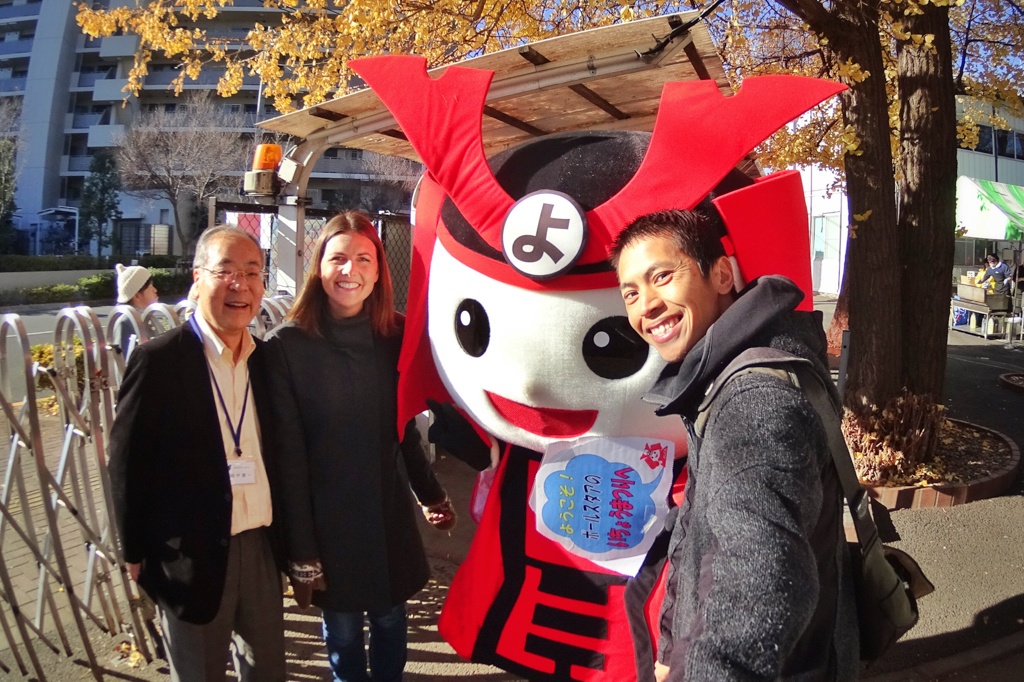 In others news, we have entered a Japanese blogging contest and if you like what we do, we'd really appreciate your votes. All you have to do is click on this link and then click on the ‘NICE!!' button for our article as pictured below. 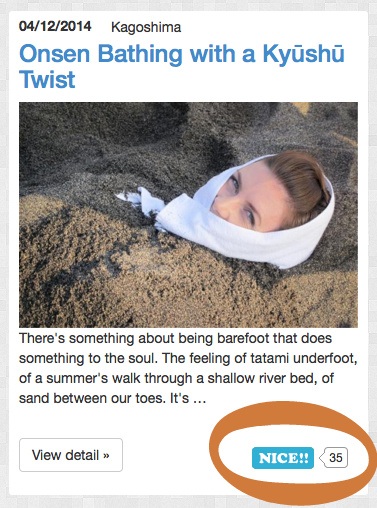 You can vote multiple times, just not immediately. So we'd really appreciate it if you could refresh the page after a while or come back each day to vote. We're far behind right now, but with your help we can give it a shot. Thank you so much!

That's about all the news for now, except for the slight jetlag. Despite the fact that the time difference between Sri Lanka and Japan is only three and a half hours, I've been waking up at 3am every morning unable to get back to sleep. Last night was the first time I have slept through to a reasonable hour. Hopefully that will continue!

Now that we have Internet access at home, we'll be working our way through lots of content and making improvements to our site. If you have any questions, suggestions or ideas for content you'd like to see, just let us know by leaving a comment below.

Thank you and good night from Tokyo!

would love to vote again... remind me the page?! Good to know you're getting slowly back into your Japanese lifestyle and can't wait to hear more about that country. Wishing you awesome times there! xoxoxox

Thanks so much, Jul', but the contest is already over. We are waiting to hear the results in January (it's partly based on votes, but will also be judged). Fingers crossed! Thanks so much for the well wishes too. We are really enjoying being back and being able to share more about this great country. Wishing you wonderful travels and a Happy New Year! xox

Love how you two have hit the ground running :-)

I'm not sure we know any other way to do it. Haha Thanks so much for checking in!

Voted! So happy you guys made it safely...and that you have a kitty friend to help you get settled. Excited to hear about your Japan transition!

Thanks so much, Britt! Appreciate it. Trying to be best buds with the cat but he's not really the cuddly type. Trying to entice him with treats, although it seems he doesn't really care that much for food! The mission continues...