I like to think there's a reason for me being born on July 14th and my unfathomable obsession with Paris and politics.

The annual 14th of July celebrations in France (officially La Fête Nationale or The National Celebration) marks the day of Storming of the Bastille in 1789 in which common folk revolted against the reigning monarchy by forcing their way into the Bastille in Paris (both fortress and prison) to gain ammunition, starting the French Revolution.

While I don't consider myself a revolutionary by any means, this event speaks to me on several levels and it has nothing to do with weaponry. Had it been merely an attempt at getting some gunpowder, then this incident would likely have ended up a mere footnote in the history books, but the Storming of the Bastille echoed a message far greater, one that could no longer be ignored by the ruling elite.

The prison in question was a poignant symbol of the monarchy – representing the misuse of funds by an endemically corrupt leadership while the poor majority starved, and the silencing of free speech and rights to a judicial process (the prisoners that had historically been held captive there were thought to be an ideological threat to the reigning monarchy and were detained without any right to appeal). Those who revolted made the conscious decision to demand something better, to stand up for values that matter, to ensure they were given a voice.

I've never been one for the status quo. I'm fiercely independent, stubborn as hell and don't believe what everyone tells me. I'm also idealistic about change always being possible. Because who the hell wants to live in a world where life is static and nothing ever changes for the better? I don't believe that this all happens organically. We need to make change happen, just like those who stormed the Bastille. I'm not suggesting launching a physical revolt, but the same principle applies. Don't like something? Change it. Stand up and be counted, even when you feel you may not be heard, especially when you feel you're not being heard. Take charge of your life and the type of world you want to live in. Make dreams a reality.

Perhaps that's why I feel so strongly about choosing to live our lives on our own terms and having this platform to tell a story. Tell it, for the record, because it deserves to be told. And when you fight hard enough, you might just send Louis XVI running all the way back to Versailles. “Is it a revolt?” asked Louis XVI. The duke replied, “No sire, it is a revolution.”

I've always adored the idea of Paris and the fact that my birthday falls on the most important day on the French calendar. So this year I was intent on making it happen. All the fireworks are for me, right? ;)

So what exactly happens in Paris on the 14th of July?

The day starts with the oldest and largest military parade in Europe. In an ode to the service men and women of the country, the troops parade down the famous Champs-Élysées avenue, by horseback and tank. Perhaps the most impressive part is the formation flyby of military aircraft right above the avenue.

It is tradition for the French to invite a foreign force to march alongside them. This year, however, all countries involved in the battlefields during WWI were invited to march together in a symbol of peace, 100 years on. 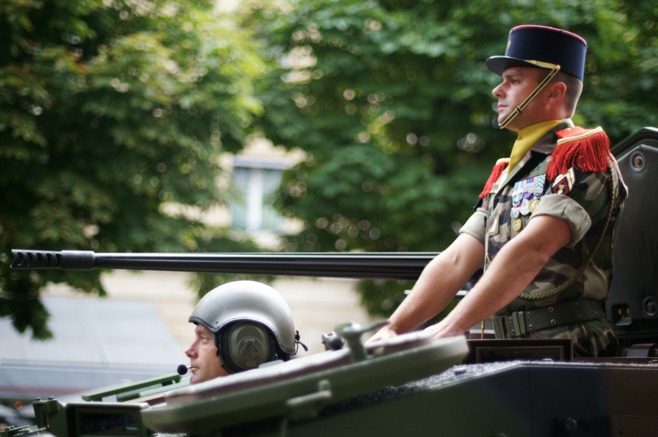 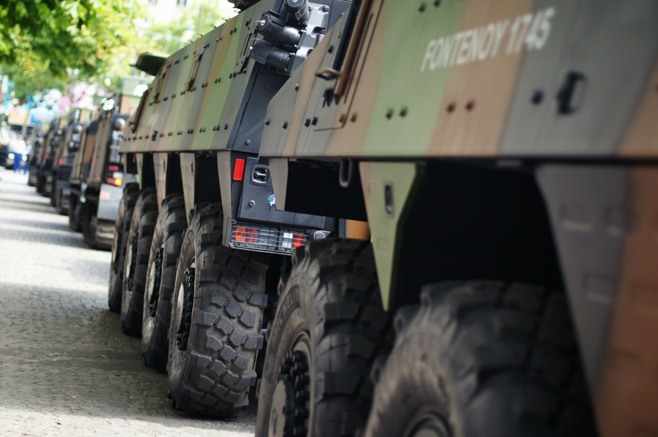 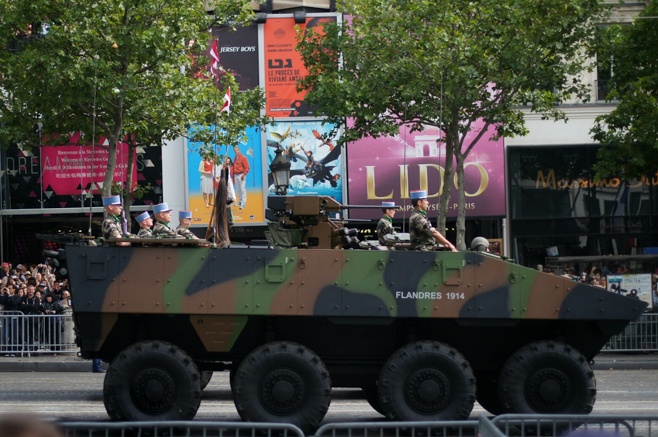 Celebrations continue on into the afternoon and evening on the Champ de Mars by the Eiffel Tower. Pack a picnic and head there early to snag the best positions. Tip: Sit some way back from the tower so you can capture the whole thing in your photos. 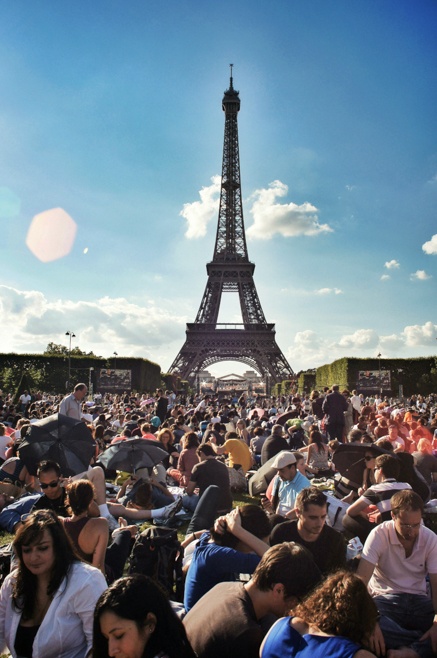 A fabulous concert starts mid-evening and when the sun finally sets on the mid summer's day, a spectacular fireworks show choreographed to music begins. In commemoration of the centenary since the beginning of WWI, this year's theme was ‘War and Peace'. If you're wondering why the Eiffel Tower closes early on this day, you'll soon see why. 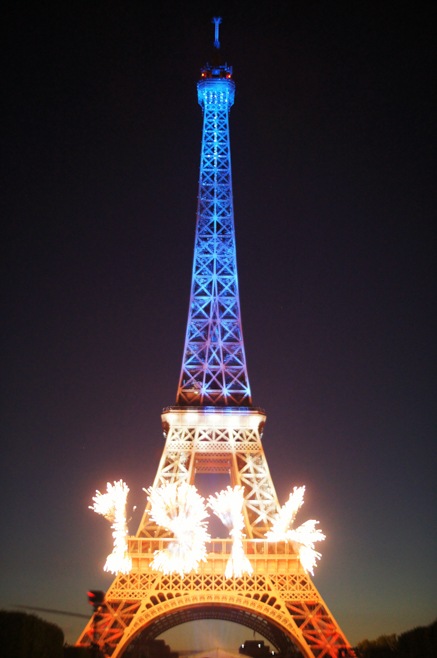 Never before have we seen a fireworks display like this. The scenes depicting war time were made to look like the Eiffel Tower was actually on fire and the perfectly timed music added so much drama. It was 35 minutes of non-stop story-telling that didn't disappoint. As appeared in a flash of sparkles on the tower, ‘Vive la paix” (Viva peace). 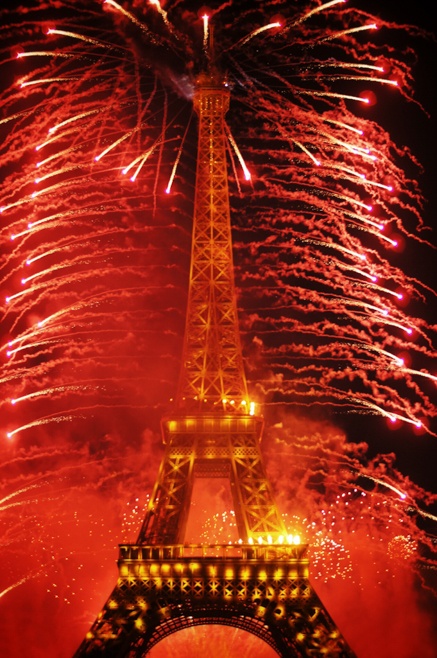 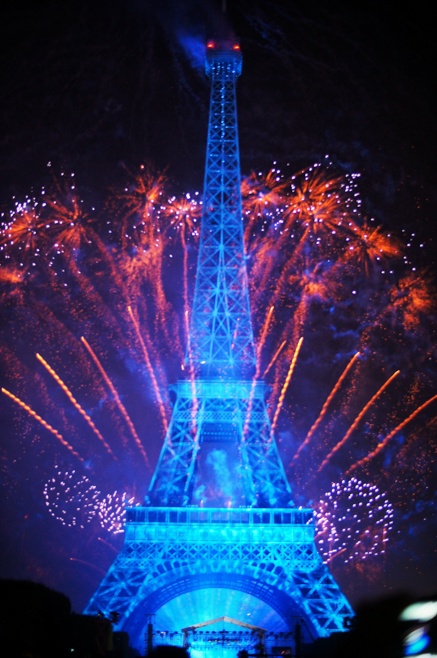 The celebrations go well into the early morning at none other than local fire stations. In another homage to the work of those in service of the people, on the night of the 13th and 14th, fire stations are opened up to the public for epic parties or “firemen's balls”! If you've ever entertained the idea of a fire fighter fantasy, this might just be your place! A pumping DJ'd disco, the firemen are both your hosts and party goers! Some were dancing and being carried on shoulders above the crowds with earpieces in, presumably doubling as security. Yeah, all looks good here. Haha 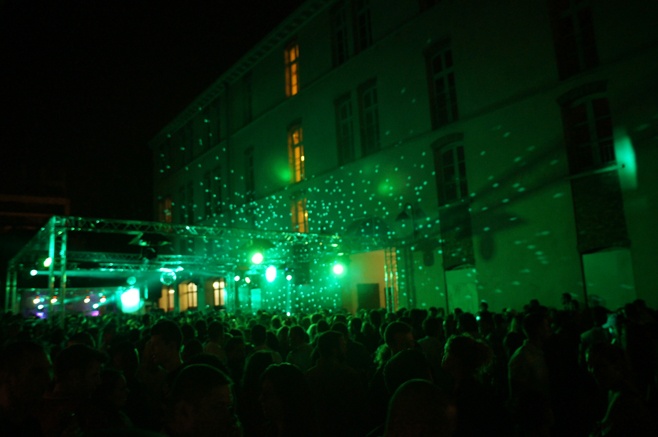 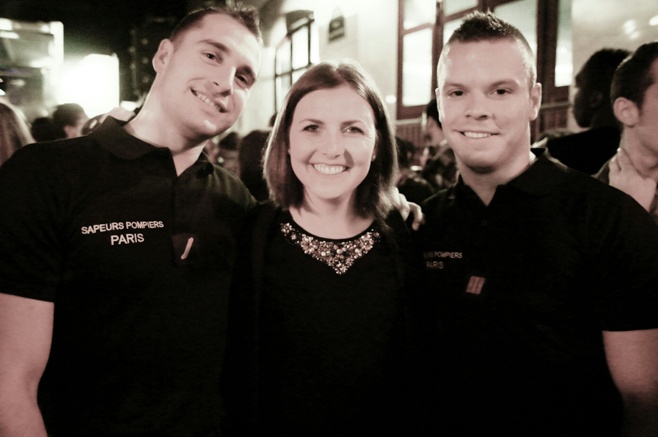 Look who I found on the dance floor! Sapeurs pompiers = firefighters. 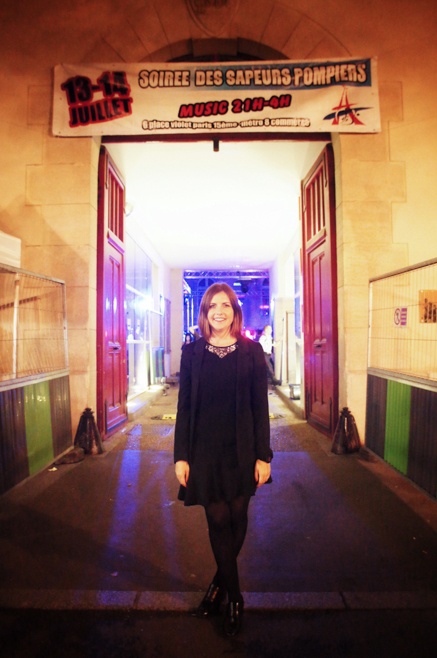 Video footage to come in our Paris vlog.

Have you experienced Bastille Day in France? Or would you like to? What's your favourite part of the festivities?

[…] If you’d like to see pictures and read more about July 14th, and what celebrating it in Paris meant to me, click here. […]

Most times fireworks don't do much for me, but that Eiffel Tower extravaganza is really something.

"Take charge of your life and the type of world you want to live in. Make dreams a reality." Hell, yeah! I love everything you said about change and revolution. As I've gotten older, I find my social life has diminished a bit because I just can't be around other people who have given up on their lives. I try from time to time but I find that being around that energy is suffocating. Sometimes I want to shake people and tell them to wake up, go out and live.

The music and story-telling really made it far more than just fireworks. Although I must say that projecting the colours of the German flag during the WWII bit was a little awkward! Oh my!

Thanks for your encouraging words too. I can so relate. It's times like those that I love having this amazing group of blogging/reader friends online who support each other and are totally on the same page about making every day count. Like the best friends I've never met. x

I see you did it all for your birthday in town! I'm glad you enjoyed it all and wish you again a wonderful birthday and time in Paris and France!

Cheers! Jul' (who's freezing her ass off - excuse my language - in San Pedro de Atacama, Chile!)

Sincerely hoping your nether regions are now at optimal temperature! ;)